Some might think that Crockers Folly is a strange inclusion into this category for it doesn’t, at first glance, seem to be on any canal. That is not so – it is above the Regents Canal! Crockers Folly is where the Maida Hill Tunnel passes through its ground and the pub is seen by thousands of towpath walkers each year as they make their way above the canal tunnel between Blomfield Road and Lisson Grove. The pub is sited about 150m from the major junction and pedestrian crossing at Blomfield/Edgware Roads

Crocker’s Folly in relation to the alignment of Maida Hill tunnel (marked by red line) whilst the entrance to Crocker’s Steps that lead down to the canal towpath is marked by a circle
Crockers Folly was originally built in anticipation of the Great Central Railway’s new London terminus being built nearby. In the event the plans for the station were changed and it was built closer to the Marylebone Road.
Its owner Frank Crocker had another pub, the Volunteer in Kilburn, and was determined that his Crown Hotel (not to be confused with the one in Cricklewood) would be a success. The pub was designed and built in 1898-9 by C. H. Worley. As events unfolded, the railway terminus was built half a mile away. Broke, and broken hearted, the tale is that Crocker jumped from an upstairs window of his new pub. This is not actually true, he died of natural causes in 1904 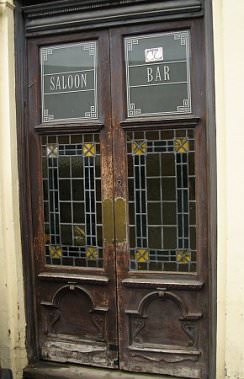 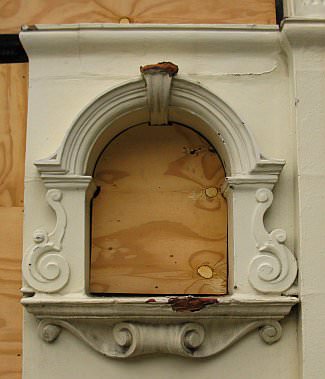 There is one miconception about Crockers Folly and that is that it was not near a railway terminus. It was actually very near the Great Central Goods Depot, otherwise known as the Marylebone station goods yard, a stone’s throw away in Penfold Street. This opened in 1890 and certainly in the days the depot was in operation Crockers Folly was patronised by the workers from the goods depot. The Lisson Grove estate now stands on the site, but there are reminders of the goods depot, including a railway bridge in Lisson Grove and a retaining wall along Luton Street, off Penfold Street
The pub’s saloon uses fifty types of marble. Several Romanesque marble columns support the saloon’s ceiling. Even the chimney and walls are lined with marble. The Grand Lobby uses a lot of cut-glass and large chandliers hang from the ceiling. Externally the windows were decorated in stone and the smaller windows given special treatment with their bowl-like sills that give the place a unique character. Its a example of a sumptiously decorated Victorian building, rather on the lines of the Grand Hotel at St Pancras 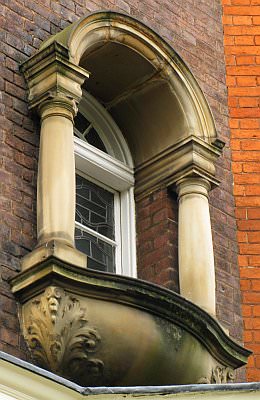 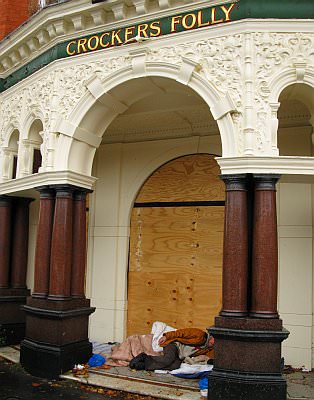 One of the upper floor windows with its unique bowl cill. Right: The main entrance has marble pillars (and a tramp!)
The pub was often used by crowds from nearby Lords cricket ground. Other than that business was always very slack and it closed in 2004. In the 1960s the pub was used to film scenes for Georgy Girl. Crocker’s Folly is now a Grade II listed building, It was on the Top 10 at risk Victorian Buidings List in 2007, and its currently on the market for 4.25million, but so far there have been no takers. Westminster council is hoping that it will be converted into a small botique hotel, consisting of a pub, restaurant and B & ;B on the upper floors, whilst retaining most of its interior features and being used more or less in the way it was envisaged at the end of the 19th century