The market at Camden Lock has lost some of its old character. Plans for major redevelopment were approved despite opposition and work began in 2007. By December 2007 a large swathe of the market to the north of the railway viaducts had been swept away. One small consolation is the retention of the Horse Tunnels, which were actually planned for demolition, but their historical significance saw a late change of plans and they have been saved for prosperity, although perhaps not in the way that would have been best in keeping with canal tradition. 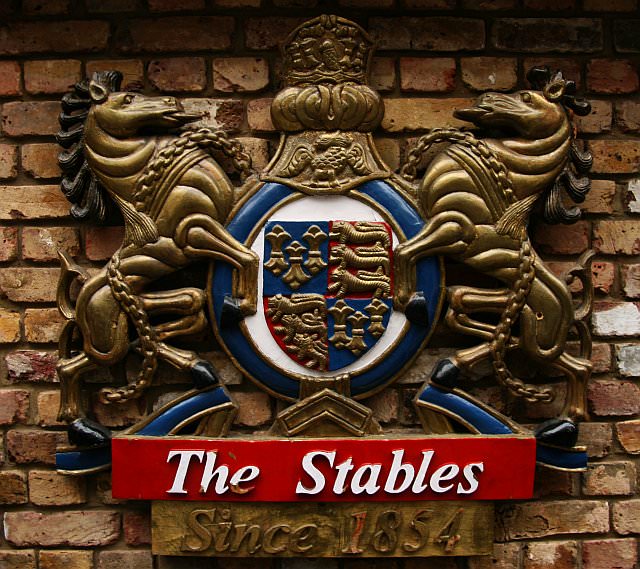 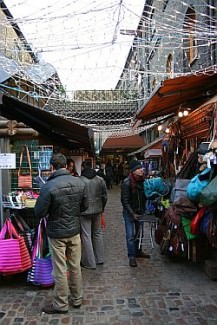 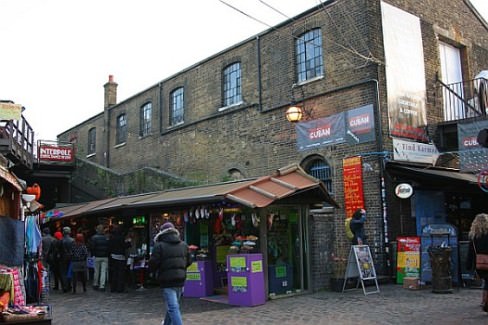 These pictures show the older areas of the market. 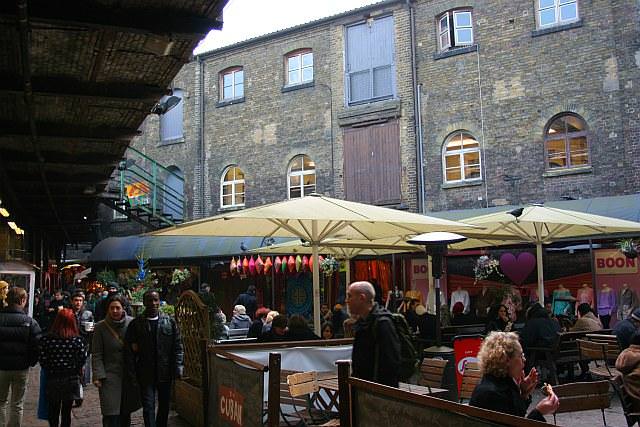 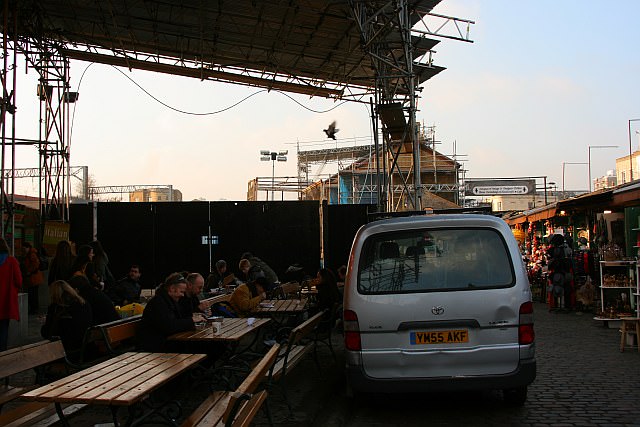 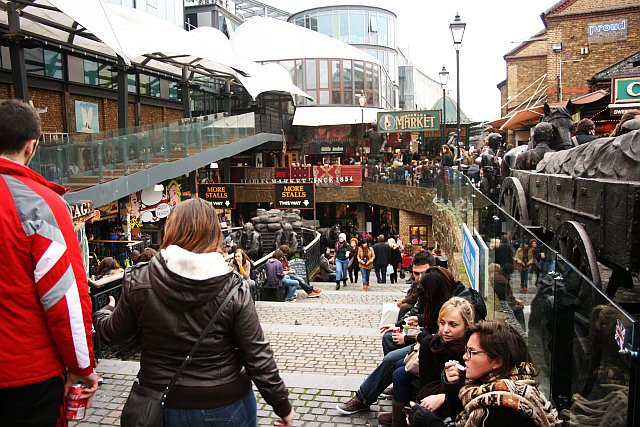 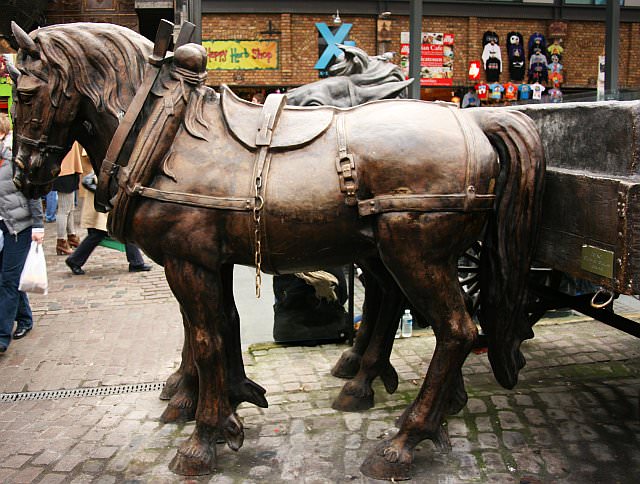 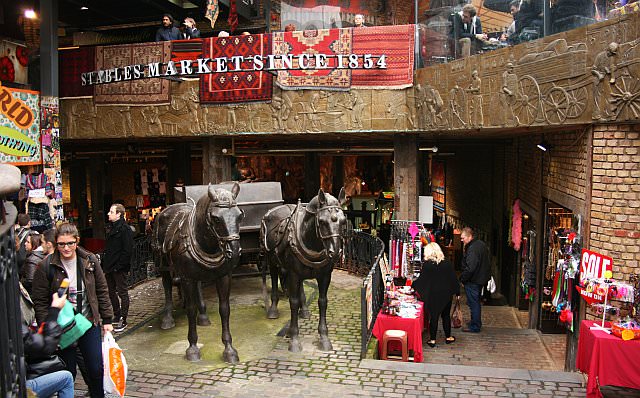 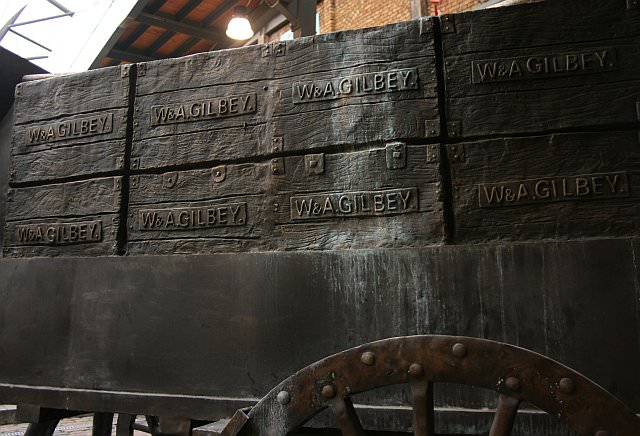 Attention to historic detail has been paid – the name W&A.Gilbey refers to Gilbey’s Wharf on the Regents Canal by the Pirate Castle
More pictures showing the Camden markets with sculptures that are quite good depictions of the horses and men who once worked the area 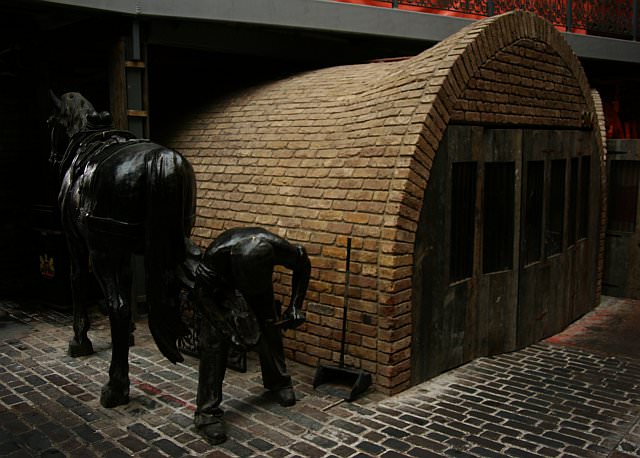 Where the horses had their shoes fitted- this is in the newer part of the re-developed market that has fortunately retained several of the historic features. 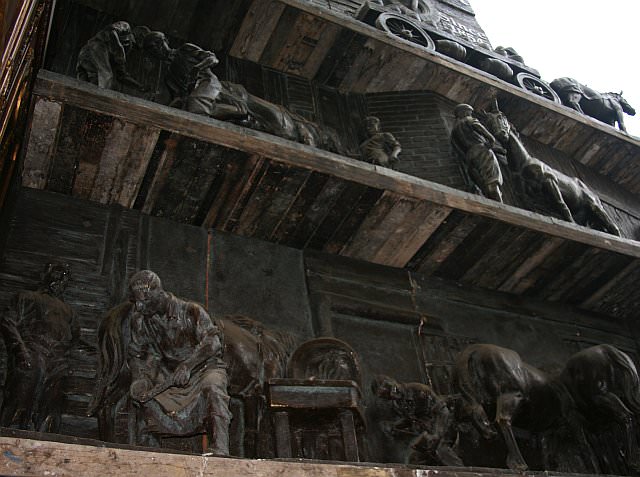 Low relief mural showing carts working the streets above while below in the tunnels the horses are being attended to – grooming, cleaning, shoes being fitted.
Below – a comprehensive description and history of the stables in the newer part of the redevelopment – with some mispellings and missing letters! The description is quite high up so its quite difficult to read – and photograph. 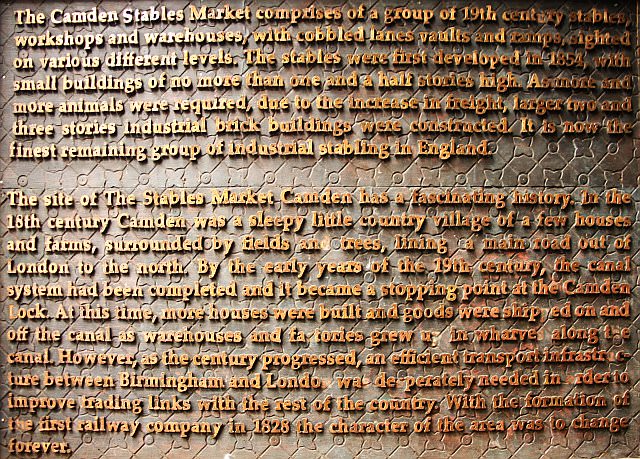 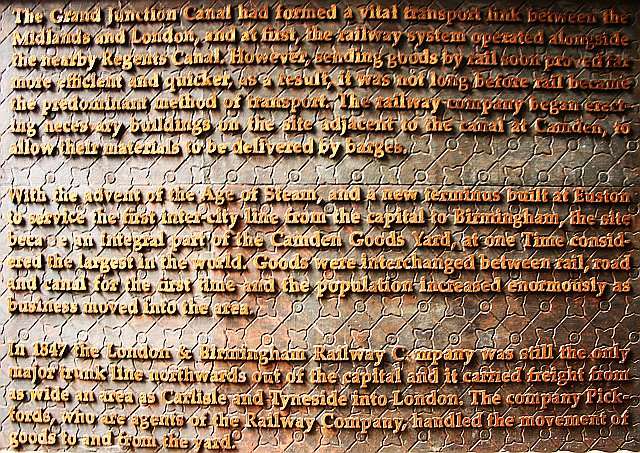 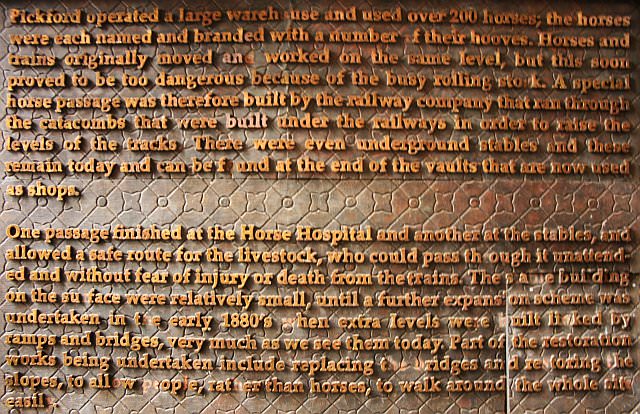 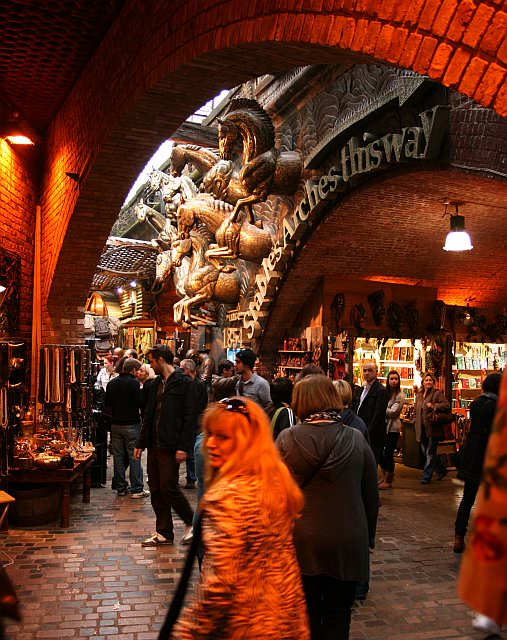 The arches under the North London line which form part of the new extension
Further along is the original part of the redeveloped horse tunnels and stables area, as shown next. 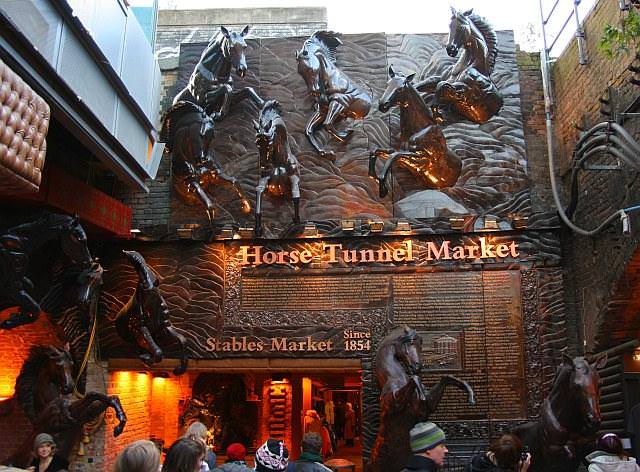 The earlier part of the re-developed horse market – 2007. This mural has been supplemented by the newer one (seen earlier) which examines in depth the history of the horse stables.

There are several sites that show the horse tunnels in greater scope than one can normally see. The tunnels are often known as the Camden Catacombs. Nick Catford’s pages are one example, 28dayslater (1) is another which shows the tunnels during the alterations that have made them part of the markets area. 28dayslater (2), 28dayslater (3) and 28dayslater (4) show the entry into the tunnels via Dead Dog Basin as well as good pics of inside the tunnels.
The Camden Catacombs are just a small part of the major complex of tunnels around the markets and the canal. There are disused railway tunnels, disused underground storage rooms, tunnels for the old winding engines used to haul trains up the incline from Euston station when it first opened, and many others. The very complex maze of tunnels has never been mapped fully. 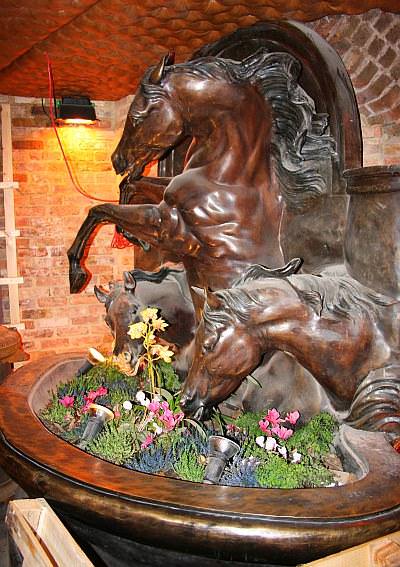 Camden Market – the Horse Hospital
The pictures below show the older parts of the horse hospital area – before redevelopment on the area to the west had been completed. 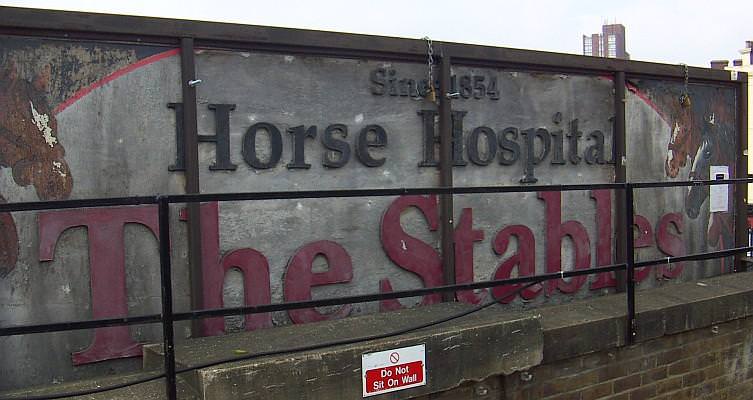 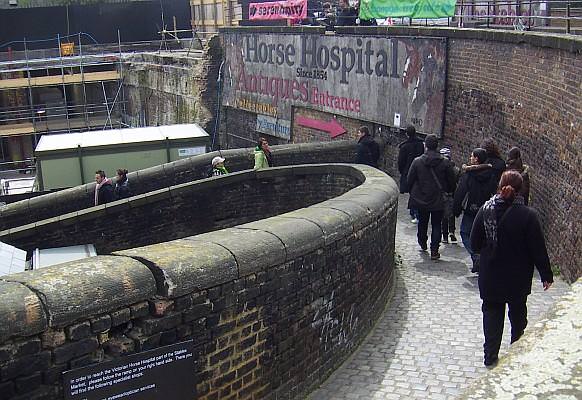 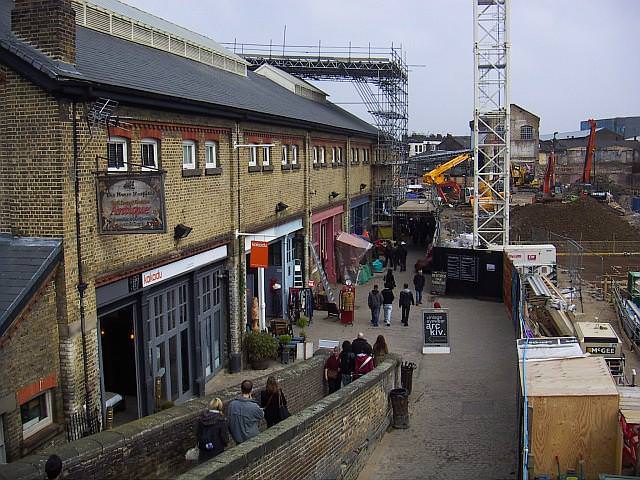 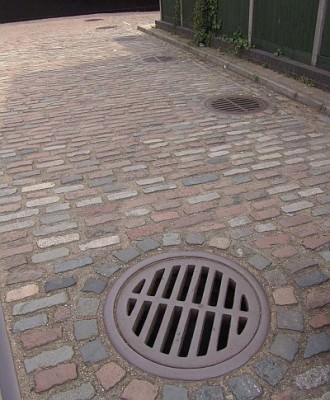 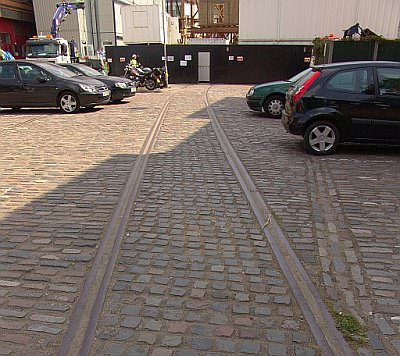 These ventialtion grilles indicate the routes of the horse tunnels, whilst redundant railway lines remind us there was once a huge rail depot here.