The canal has a lengthy run past Horsenden Hill Golf Course as far as the WLCC at Alperton. Despite the location it is surprisingly rural 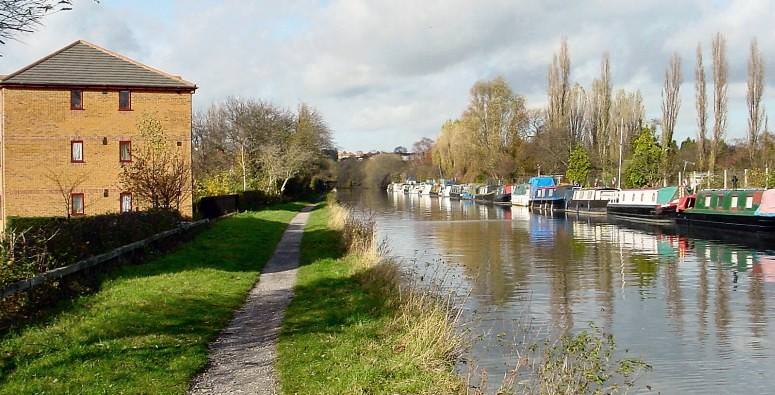 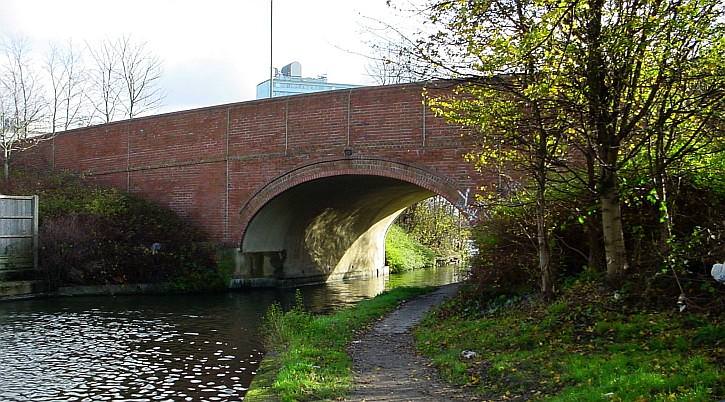 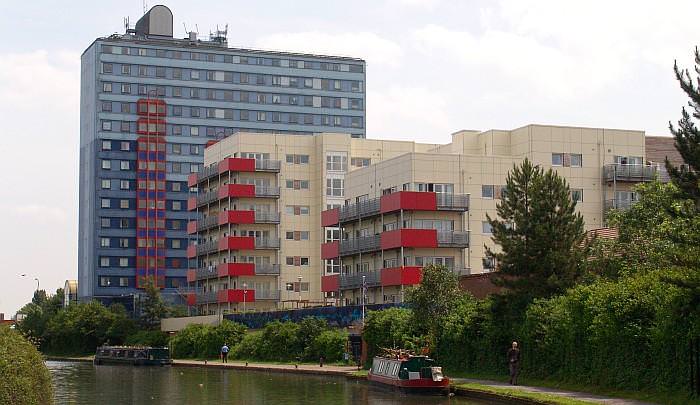 The visitor moorings at Alperton, next to the large Sainsburys superstore. 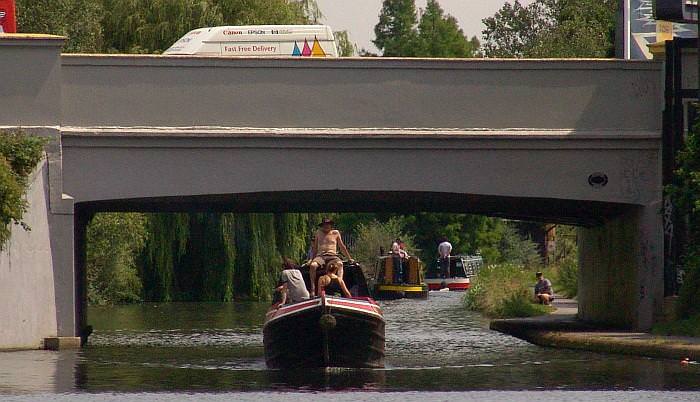 Alperton’s Ealing Road bridge. Wembley and its shops, as well as the large IKEA and Tesco’s Superstore at Neasden, are not far away as are the superstores such as Wickes and Asda at Hanger Lane. Plenty of buses to all these destinations. Both Hanger Lane and Wembley are within reasonable walking distance.
The large B & Q store has gone and new housing is in its place. Adjacent to the canal bridge is the Pleasure Boat Inn. The boat in the picture shown above is the Mikron Theatre N/B Tyseley heading westwards after a playing number of shows in Central London 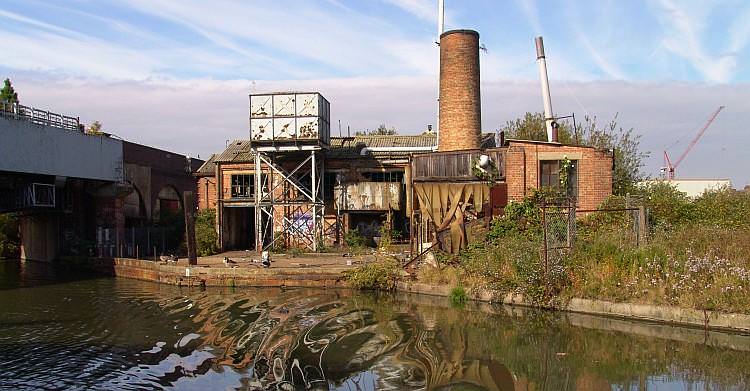 This derelict factory with what seems like half its frontage razed was a long standing feature by Alperton railway bridge.
The site has since been redeveloped and now sports a set of flats with a recreational/leisure area by the canal, and a fully accessible footbridge that provides new connections in this part of Alperton. 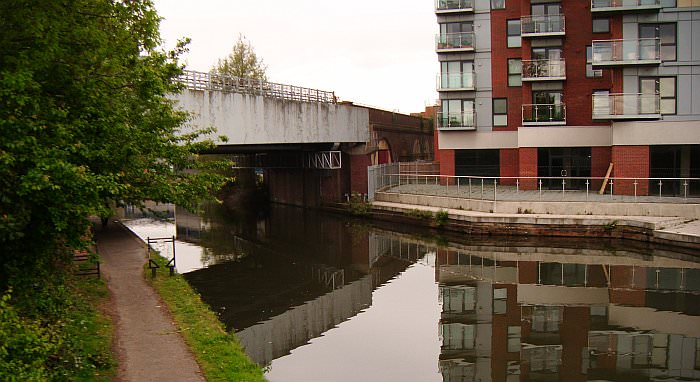 The new footbridge at Alperton linking Atlip Road and Hazel Grove.
Alperton railway bridge is the second of two tube lines that cross the Paddington Arm. Along with the Metropolitan crossing at Marylebone these three are the ONLY ones that cross any of the waterways within the London canal network. That at Watford (Metropolitan line) is offically outside Canal & River Trust’s London area so is not included.
The stretch of canal from the Piccadilly Line to the aqueduct still retains some essences of the older character that the Paddington Arm had. At several locations on the offside before the aqueducts remains of a number of wharves indicate the canal’s former glory days as a major transport artery. Sadly it had all succumbed to the more efficient road transport by the mid sixties.

The Alperton, North Circular Road, or Stonebridge Park aqueduct. This is the second one on site
The aqueduct crosses the A406 North Circular Road. The original aqueduct was opened in 1933 and consisted of two arches across the new North Circular road. The newer, larger one dates from 1993 and has just the one arch in order to accomodate a widened North Circular. The coat of arms sited on the centre island of the aqueduct are from the original 1933 structure. Here’s an aerial view of the two aqueducts in 1936. The structure is officially known as Stonebridge Park aqueduct.
When it was opened in 1801, the Paddington Arm only had one official aqueduct. This was the Kilburn Aqueduct which “vanished” in the canal’s early days – actually it’s buried underground – the only way to see it is by traversing London’s sewer system! The other, unofficial still – even these days – is that over the River Brent. Despite the substantial embankment across the valley of the River Brent, much larger than that at Kilburn, the Brent aqueduct was not even depicted on maps of either the Grand Junction or Grand Union Canal companies! 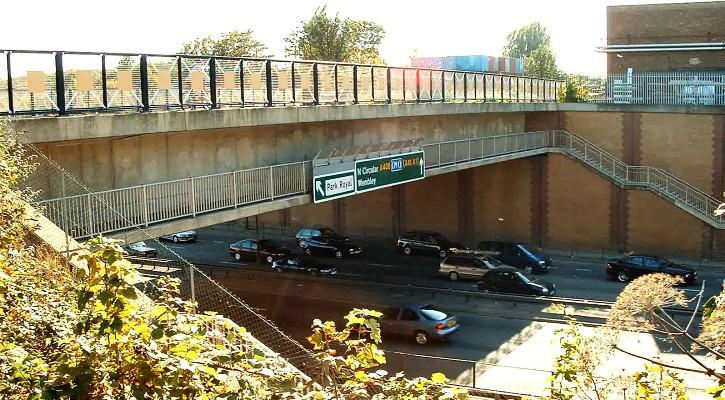 The western side of the North Circular Road aqueduct
Work began on this section of the Paddington arm first, during 1797, so the Brent aqueduct was one of the canal’s infrastructure to be completed first, sometime during 1799. There is the possibility it may have been called Twyford aqueduct in the early days of the canal but for now we must call it the River Brent aqueduct. It’s huge concrete span clearly denotes this quite unspoken structure as the second largest aqueduct on the waterways of south east England!
The Brent aqueduct’s stupendous span clearly pre-dated many of the structures by Brunel. His Maidenhead viaduct had the broadest brick built span in the country but the Brent aqueduct must have held that record at one time. Today this hugh span is rendered in concrete, but this belies the fact it was built by 1799.
For more information on the Alperton aqueducts and the IRA bomb attack of 1939 see Some Alperton History. 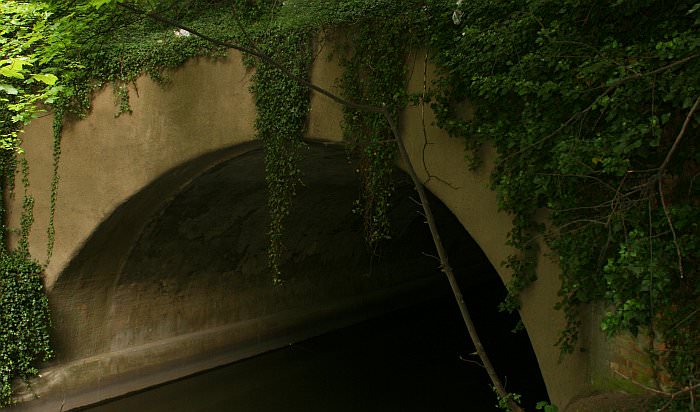 Hidden in the dark, stygian depths near the North Circular aqueduct is this huge one across the River Brent.

The new Wembley Stadium makes it appearance on the Park Royal stretch, amongst the rows of new warehouses with their large open spaces
The stretch of canal from through Park Royal used to be lined with factories and there’s just one left these days. The rest have been replaced by these new modernistic warehouses & offices with spacious car parks

The last remaining old style factory at Park Royal. This was part of the large Heinz 57 complex – our tomato soups were defintely made here!
The main complex can be seen complete in this aerial photograph of 1928 It was one of the first major companies in what became known as the Park Royal estate. 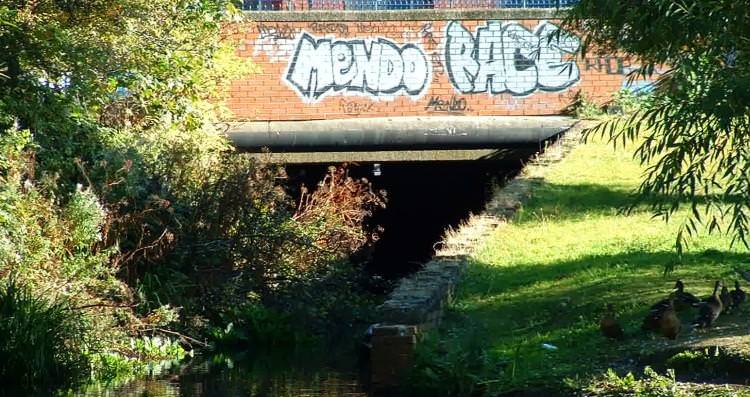 At the end of the Park Royal stretch next to the fire station, the Brent canal feeder as it emerges from its underground journey which begins at Milton Avenue in Harlesden. The feeder is not currently used but there have been plans to restore it. Canal & River Trust are still responsible for this and the maintenance of Brent (Welsh Harp) reservoir 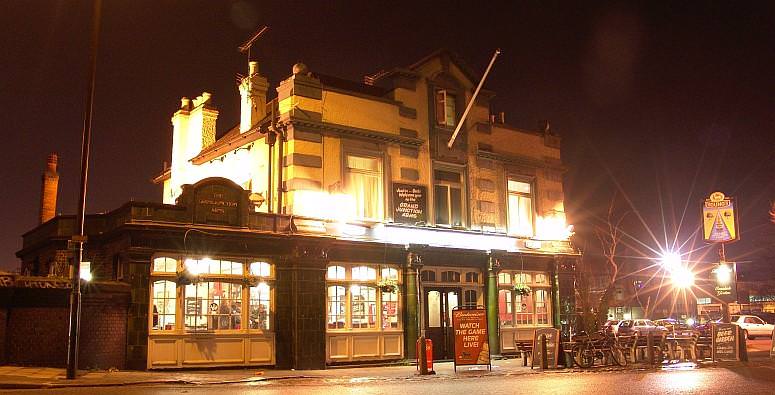 The Grand Junction Arms, Acton Lane, Harlesden at night. Plaques on the bridge denote the distance to Little Venice as four miles and Bulls Bridge nine miles.
The pub looked better in its old green and cream colours. Its now painted entirely in a very dark green and not quite so pleasant. There is a cafe on the towpath side by Barretts Green Road, known as Jack’s Cabin. Nice, large, bright and recommended.
The distances given by British Waterways (now of course Canal & River Trust) dont seem quite right especially with regards to the Bulls Bridge end of things. Its probably around eight and three quarter miles in fact as the canal’s own ten mile marker is clearly a mile and a quarter distant from Acton Lane bridge.