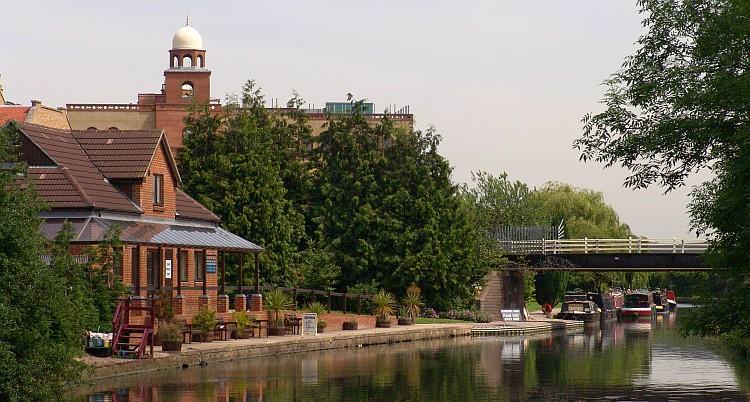 Northolt boatyard, offering services, gas and diesel. Its operated by High Line Yachting of Iver. This is the last opportunity to fill up before London. The next opportunity is Springfield Marina on the Lee Navigation – unless one happens to meet either of the area’s working narrowboats that sell coal and diesel
The building seen towering above the wharf is the Dawoodi Bohra Jamaat, which recieved a visit from the Prince of Wales in February 2009

These names have been scrawled on the side of this warehouse for as long as I remember. James Dean & David Bowie yes we know who they are, but Jonny Boesom?? I’ve searched on the internet and drawn a blank. Who the hell is he? Incidentally there used to be a wharf here at one time and mooring rings may still be found 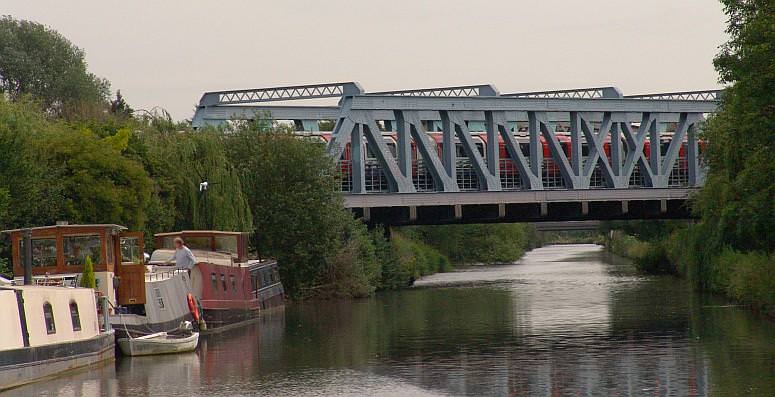 The Central Line bridge at Greenford. This is the first of just two deep-level tube lines to cross the canals anywhere on the entire London network. The other is at Alperton. Nearby Greenford tube station has lower quadrant semaphore railway signals. There used to be one on the station platform controlling the branch line from West Ealing, but just the junction signals on the adjacent main line remain. 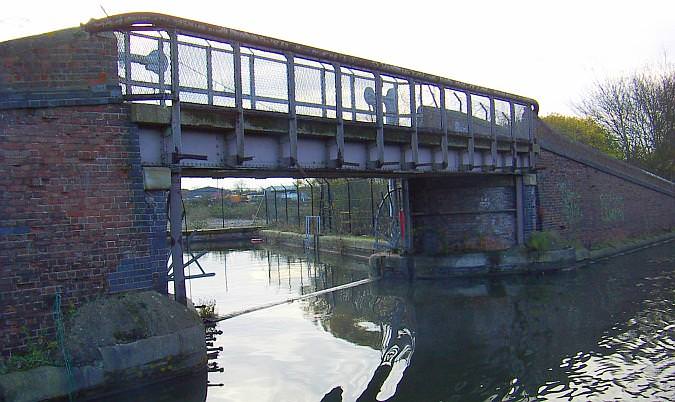 Lyons Dock before restoration as part of a new development in 2008. This used to serve the large factory belonging to J Lyons Ltd
The Lyons factory was a huge complex (see this article.) It was opened in 1921 and at its zenith employed 300 workers.The dock had the latest mechanical equipment and was used to unload the barges. This was proudly shown to King George V on his visit in the 1920’s. On the west side was their ice cream factory. This closed in the early 1990’s whilst the remainder of the site was vacated by 1995
Greenford has a long history of factories. The first was opened in 1856 and was used to make dyes. W Bailey’s glass works, Perkins and the British Bath Compnay were some of the locale’s major employers. The latter still exists and the other the main industries today are Glaxo and Rockware Glass 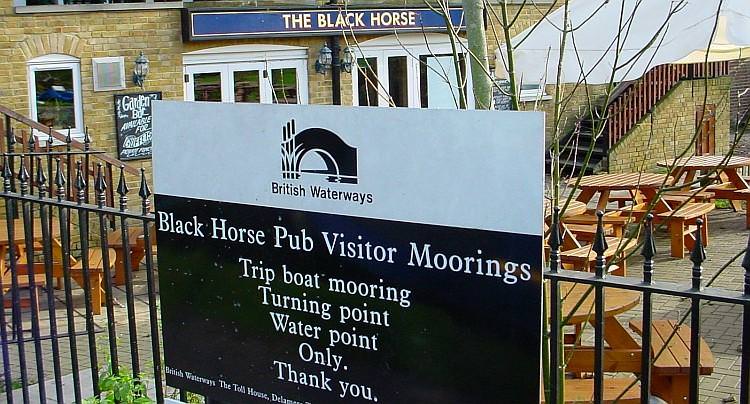 The signs say it all. The Black Horse Pub at Greenford 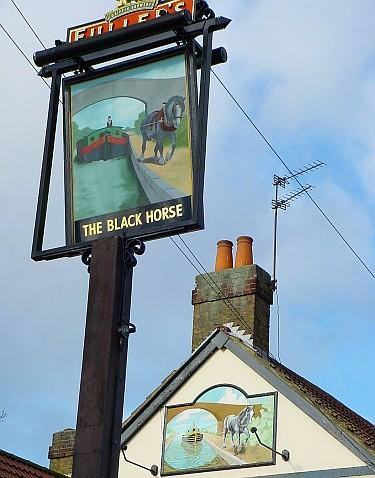 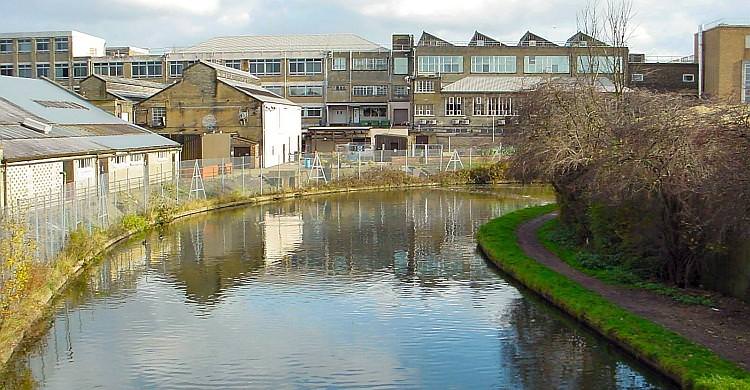 View from the Black Horse looking in the London bound direction, with the Glaxo complex on the offside. The sharp bends here mark this as the northernmost point on the canal. From Bulls Bridge it has headed in a north/north east direction, generally in the direction of nearby Horsenden Hill. Here it changes tack completely and heads past Horsenden Hill on a east/south east alignment towards London. 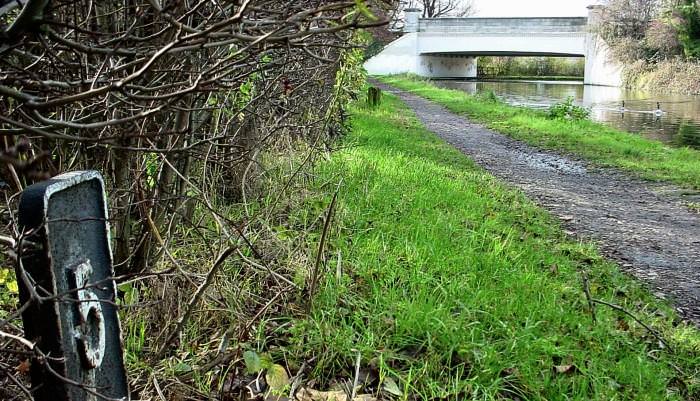 Near the Greenford By-Pass crossing is one of the Paddington Arm’s few mileposts. This denotes five miles from Bulls Bridge

The large wooden footbridge at Greenford Playing Fields. Its the second of two such types on this canal. Moorings is possible on both sides
The stretch alongside Greenford playing fields towards Perivale offers several opportunites for mooring on either side of the canal. Some spots on the offside are difficult toget into but are peaceful. The towpath side by the playing fields gives boaters a chance to walk south across the fields using public footpaths to the many different superstores not more than about half a mile away. If one doesnt want to walk, then by mooring at the Black Horse one can travel by bus to Greenford ‘Red Lion,’ where the town’s many shops can be found. These are quite a distance away in the direction of Ealing Broadway
The canal passes alongside a large depot which is actually the Rockware Glass Works. Its not so apparent in the summer when the trees are in leaf 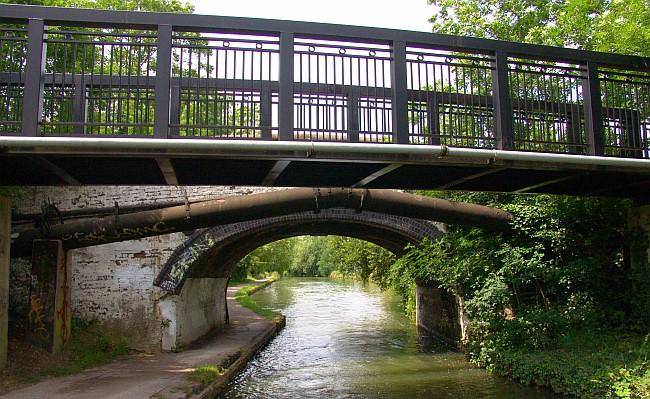 The only original bridge left en-route along the Paddington Arm. This is Horsenden Hill bridge near Perivale
Horsenden Hill bridge still has GJCCo tie bar plates and these give the date as 1909. Traffic lights are used to control the single file roadway across the canal.
Nearby is the Perivale Tesco superstore which is situated in the Hoover Factory. This noted Art Deco building was constructed in 1931. The Paddington Arm is well supplied with superstores. There are six of these on or near the canal between Bulls Bridge and Kensal Green 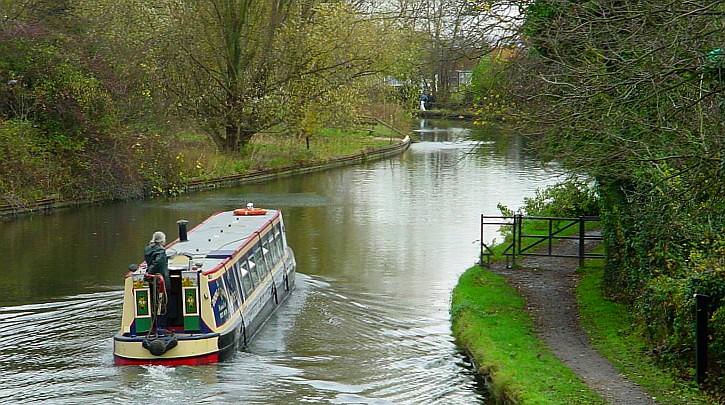