The Padddington Arm of the Grand Union Canal (formerly the Grand Junction Canal) like all the Grand Union routes, was actually owned by the Regents Canal company. Their Grand Union network was formed in 1929 and was the last major waterways merge before nationalisation. The Paddington Arm was one of the last to see the old fashioned style of regular commercial traffic. By this I mean paired narrowboats carrying the traditional materials such as coal, oils, tar. The Paddington Arm now sees a lot of regular commercial traffic, usually in the form of aggregates. Its usually construction materials eastwards and rubble westwards for Old Oak or other destinations

Long gone old style British Waterways Board signpost at Bulls Bridge. It seems the signposts here dont have a very good life
Despite requests for it to be included on London Canals, the Paddington Arm has always thought to be a feature that couldnt be done easily. The arm is often viewed as one of the least desired waterways to travel on. Its just not very exciting. Most boaters tend to use it as a through route between the main Grand Union and the more attractive lights at the London end. In the past the Paddington Arm was actually more interesting but has become bland as time passes. Its one of the most unhistorical stretches of waterway in the country.
There used to be numerous arms and wharves off the canal but perhaps 95% of these have been filled in and almost the entire industry that lined it is no more, and no historical buildings apart from the Toll House in Little Venice. What could be described as replacements – such as Engineers Wharf – do make slight amends but does just not ‘replace’ anything or enhance any of the history the canal once had. The one good advantage of the Paddington Arm for many people is its splendidly rural aspect. In quite a few places its a green corridor and gives the feel of not being in London. Alas some of the rural stretches wont last and these will inevitably fall under some kind of redevelopment or other 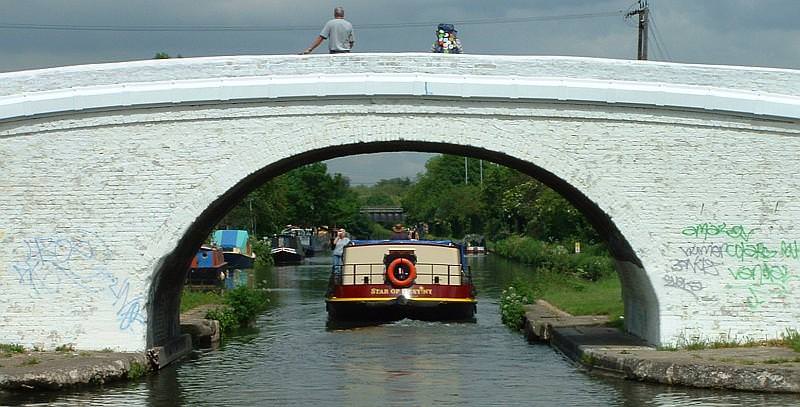 One of the ‘cleaner’ views of the famous white painted bridge. Vandalism and graffiti is quite a problem along this stretch.
We begin at Bulls Bridge, which is where the arm heads north east from the Grand Union Canal’s main line, as shown in the picture above. Bulls Bridge used to be the heart of the Grand Union Canal network, and in the old days scores of paired narrowboats, plus a few widebeams, waited here to be given their orders. Bulls Bridge has now been redeveloped considerably and there is little history left to see. It consists of mostly superstores and modern warehouses. Even the Western Market has been swept away and replaced by a smaller but more modern version. Practically the only remants left are the dry dock next to Tesco’s and the white painted turn over bridge at the entrance to the arm, and there’s a small aqueduct over the Yeading Brook. 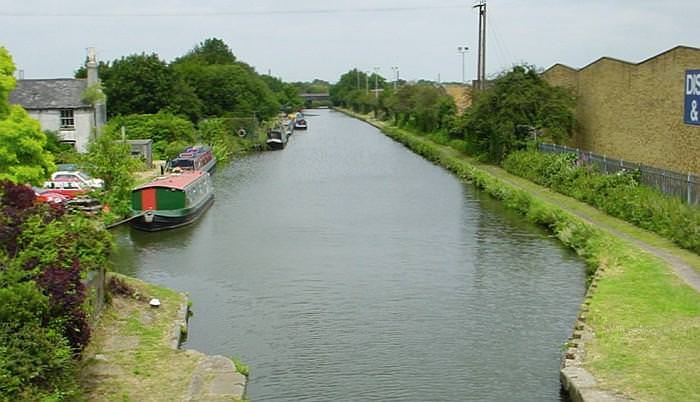 Looking north east along the Bulls Bridge straight towards the railway bridge.
One of the last regular commercial narrow boat traffics was the famous Jam ‘Ole run. Its destination was the dock (now filled in) on the towpath side in the view above about mid-way between Bulls Bridge and the distant Great Western railway crossing. Kearley and Tonge’s factory has also disappeared and like the rest of the area its site is now warehouses. Narrowboats used to make a regular run from the coal mines on the Coventry Canal, travelling via the Oxford and Grand Union Canals to Bulls Bridge. The service finished in October 1970.
Two of the most noted narrowboats on the last run were Lucy and Raymond. I have not been able to find out exactly which motor boats were used but it seems that Raymond must have worked with Nutfield, as these were the pair owned and operated by the Brays/Kendall family whilst Lucy was towed by Ian. Interestingly the record for a Jam Ole run was the one operated by a crew of women. This was the Whitlock family in 1940, then consiting of mother, sister and niece, who managed to load up TWICE in just one week at the Coventry collieries after having made one return trip to Bulls bridge and back. A plaque commoreating the feat can be seen at the entrance to Braunston marina. 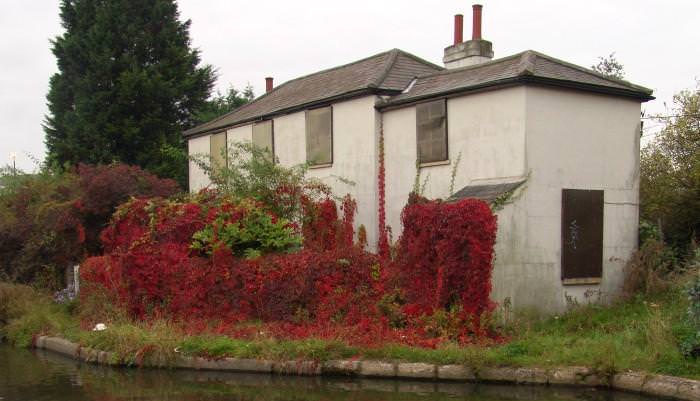 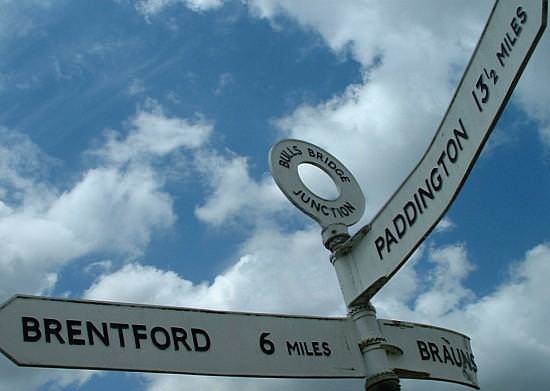 The newer signpost at Bulls bridge has seen better days! Is that Braunston or an advert for Braun’s shavers?? 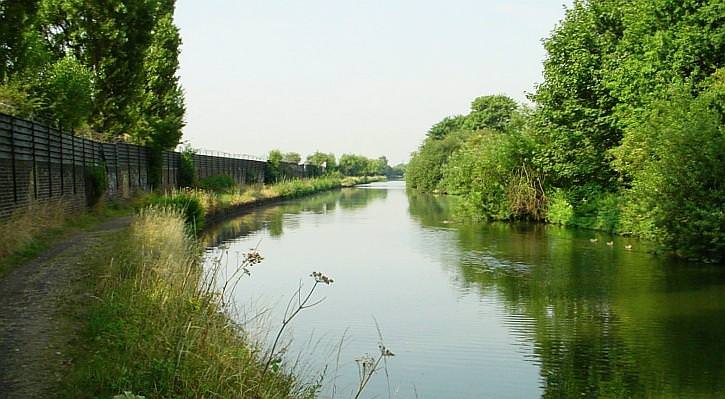 The remotest section of the arm is that between Bulls bridge and the Uxbridge Road. Despite being in Southall with views of the prominent blue gasholder, and a vehicle compound on the other side of the fence, it does feel like somewhere on the Midlands canals. Its remoteness is because there hasnt been anywhere to get off the towpath since Bulls Bridge 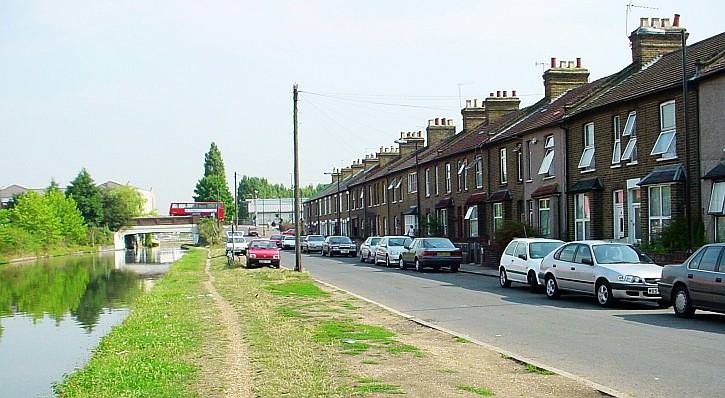 The houses by the Uxbridge Road in Southall. There are official visitor moorings for shopping but I’ve not seen anyone, other than Granny Buttons, make a stop here! 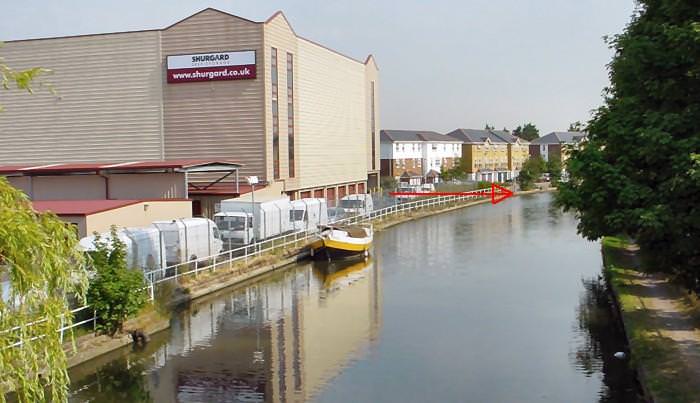 The view from the Uxbridge Road. The canal here forms the boundary between Southall and Hayes and the area northwards was known as Hayes Gate after its nearby farm. The red arrow indicates the point at which the seven mile long Ruislip Canal feeder once emptied its waters into the Paddington Arm 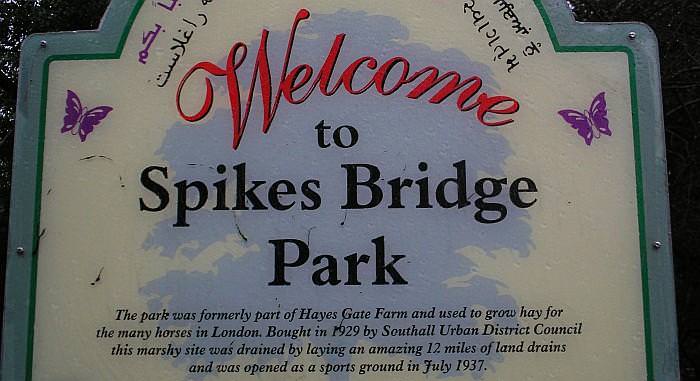 A bit further north the canal enters a section with two linear parks. The first is Spikes Bridge and as this information board tells us, it opened as a sports ground in 1937, having once been part of the large Hayes Gate farm estate. There were a number of cuts off both sides of the canal at this location some of them quite long
Next is the large Willowtree Marina with its houses and lifting bridge. There’s a huge Tescos superstore nearby and in some ways its more pleasant than the one at Bulls Bridge. The only problem is it is not accessible from the towpath. Try to moor in the marina (seek permission first) or next to the bridge on the main canal itself near the diesel point
There used to be a lengthy branch off the canal to the north of Willowtree marina and it extended westwards to a wharf on Willowtree Lane. It passed the site of what is now the large T esco superstore and reached its furthest extremity at the roundabout on what is now the A321. There was another lengthy branch further north that reached a different part of Willowtree lane (at the present junction of Kingfisher Drive and Glencoe Road) but what it served I do not know
The large Wiilowtree park to the north used to be known as Durdans park originally. There used to be another branch canal on the towpath side and a turn over bridge existed. This served the Durdans Works

Engineers Wharf, Northolt, before its stop planks were lifted and the marina opened up for boats
The main feature of the Paddington Arm at the nearby Ruislip Road crossing used to be the factory with its buildings right across the waterway. Building structres in this way is not such a novel idea as one might like to think and this was an early attempt at that kind of thing. It was demolished in the 1990’s. 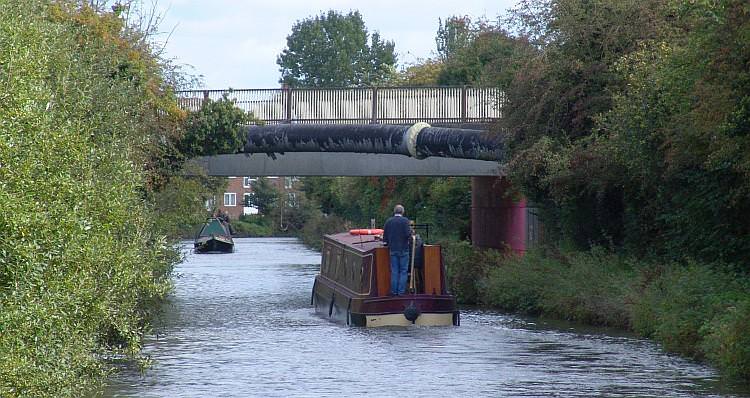 The Kensington Road crossing in Northolt. The old crossing was known as Ealing Road bridge.

Wooden bridge at Farrier Road, Northolt just before the A40 Westway crossing. There are two wooden footbridges on the Paddington Arm.