Three canal tunnels exist in London. Two of them are on the popular western end of the Regents Canal between Little Venice and Regents Park, whilst the third is the longest and travels under Islington

Casual visitors to London who take a trip on the waterbus will pass through Maida Hill Tunnel under the Edgware Road. More experienced canal users will know of the longer tunnel that passes under Islington. Despite consensus that two canal tunnels exist in London, there is in fact a third – it doesnt look quite so obvious, but having passed through Maida Hill Tunnel (272 yards/251 meters), trippers to the Zoo or Camden then travel beneath Lisson Grove in a tunnel that is just 53 yards/48 meters. Its the only London canal tunnel with a towpath so perhaps people think it is not a tunnel 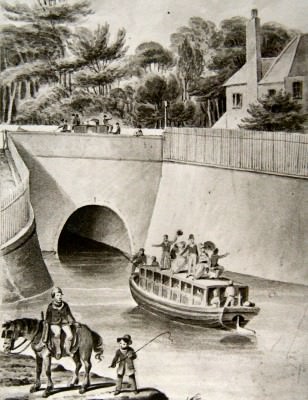 Maida Hill tunnel in 1815. The boat depicted appears to be one of the Paddington Packet barges. Since both the Regents Canal and Grand Junction canals were level it wouldnt be a surprise to know that the Paddington Packet may have worked through to Camden on special occasions. Note the coach passing by on the Edgware Road. Canal plans do not show a basin to the left, where Cunningham Court now stands. There may have however been a basin here for a short while before Blomfield Road was built
Maida Hill tunnel was the scene of an accident in 1825. A boat was being legged through the tunnel when suddenly the planks on which the men were laying slipped. One man was severaly injured, and two men died, one crushed by the barge itself, whilst the third body was never found
Maida Hill and Lisson Grove tunnels are the busiest on the canal system. The canal between Maida Hill and Lisson Grove tunnels must be the shortest between any two different tunnels, discounting Lord Ward’s tunnel and Castle Mill Basin on the Dudley canal as, officially, thats all part of Dudley Tunnel! At the height of summer a trip boat passes through each tunnel as frequently as every ten minutes (boats regularly including Gardenia, Milton, Perseus, Water Ouzel (of the London Waterbus Company) Jason (from Blomfield Road) and Jenny Wren (from Camden Town) with twice or thrice daily forays in the summer from the entertainment boats Lace Plate, Prince Regent (from the Floating Boater) Dawn to Dusk (from Jason’s) and My Fair Lady (from Walker’s.) Sometimes there will be up to four heading through the tunnel in the same direction with one or two coming the other way which makes six in the space of just over ten minutes

The Blomfield Road stretch looking towards Maida Hill tunnel in the 1940’s. Even back then the canal was popular for fishing!
Jason’s Trip was the first motor trip boat to start on this attractive stretch of canal back in 1951, whilst other pioneering boat trips utilised Evelyn from 1953 with Lord St Davids using a mix of horse towing (up to Maida Hill east) and tractor towing between Maida Hill (west) and Little Venice – propulsion through Maida Hill itself naturally being human powered! All these trips began near the west portal of the tunnel
Islington doesnt have regular boat trips through it. However, special events at the London Canal Museum sometimes also offer trips through Islington Tunnel. Every year on the first weekend of September trips through the tunnel are offered as part of the Angel Canal festival. Schools also have the opportunity to experience ‘spooky’ halloween trips with the various community boat clubs (Pirate Castle, Angel, Tarporley, and the Laburnuam Boat Club
Out of the three London canal tunnels only Islington was planned. Lisson Grove and Maida Hill Tunnels came about as a result of many objections to the original canal route from Paddington to Regents Park. Ironically it was a further objection to the planned alignment of Maida Hill tunnel that caused the 3rd one at Lisson Grove to be built! Maida Hill tunnel was not an easy one to build because of springs encountered during its construction. However it – and Lisson Grove – were opened in 1816, four years before the Regents Canal was completed, and traffic was enabled as far as Camden. Lisson Grove Tunnel was built under land belonging to a Mr Richard Eyre. In the early days of the Regents Canal this tunnel was alternatively known as Eyre’s tunnel, a name that soon disappeared when the road that passed over the tunnel was renamed from Grove Road to Lisson Grove. It was probably the widest canal tunnel ever built at the time of its construction in the second decade of the 19th century. Other wider tunnels, like Strood and Netherton, came later. Spoil from both tunnels and their approach cuttings was used for making level the nearby piece of land that is known as Lords Cricket grounds
The cafe over Maida Hill tunnel, known as Cafe Laville, was built in the 1970’s as part of a initiative by the old Westminster City Council. A large concrete/steel raft was erected over the portal of Maida Hill Tunnel for the cafe. Despite massive local objection to the siting of a cafe at this prominent position, it was built and the news stall that had stood here for years was no more. Little known at the time, the cafe would soon provide one of the most spectacular views offered from any eatery in London, looking along the tree lined stretch towards the Warwick Avenue bridge and Little Venice
The boats moored along Blomfield Road were displaced from other locations on the Regents canal when British Waterways (then nationalised) came up with some very controversial proposals for illuminated boat processions and entertainment primarily aimed at the tourist market. Many boats were relocated from Turner’s at Cumberland Turn to Blomfield Road, in readiness for making the Cumberland Turn site the depot for the Arklight boats. Vigorous opposition to BWB’s ‘Arklight’ plans halted the scheme. The Blomfield boats remain where they are, their original moorings having being lost in the process. As a result towpath walkers now have to use the pavement along Blomfield Road, and this has caused many problems, especially as now BW is obliged under the Disability Discrimination Act 1995 to make better provision for disabled people using the towpaths 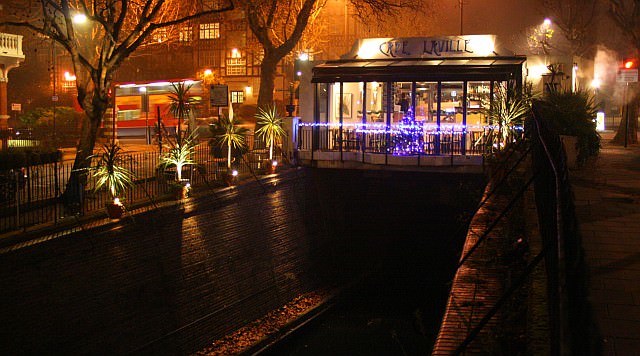