The first canal scheme in London: The Limehouse Cut was the first navigable artifical waterway (the much earlier New River was built as a water supply aqueduct and not intended for navigation.) The Limehouse Cut changed in two ways – its link to the Thames and its level, were changed when the old lock with its unusual supporting trusses were done away with and a new cut made into the Regents Canal’s Limehouse Basin. 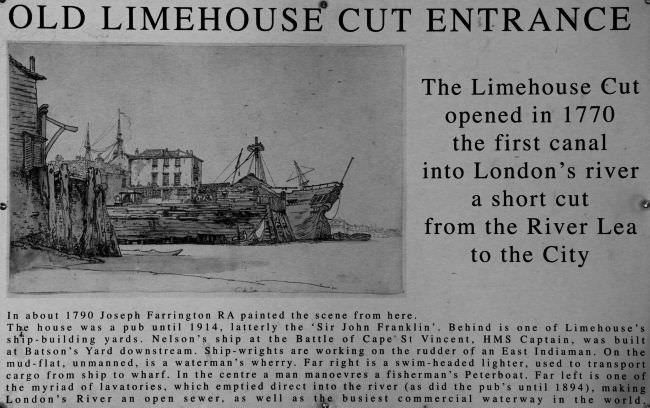 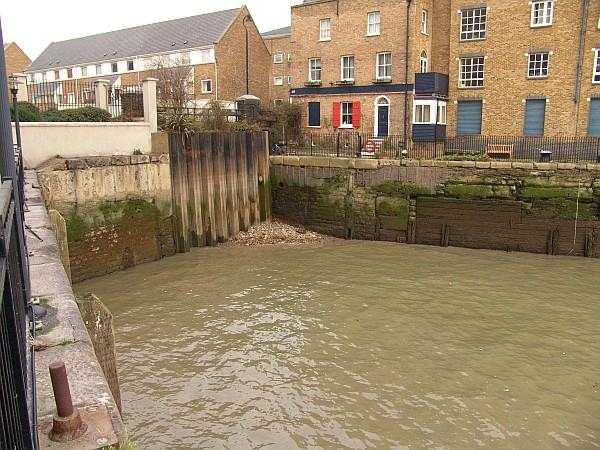 By the Thames the entrance to the old Limehouse lock is still discernible. There are mooring bollards of various kinds that serve as a reminder of this inlet’s previous function 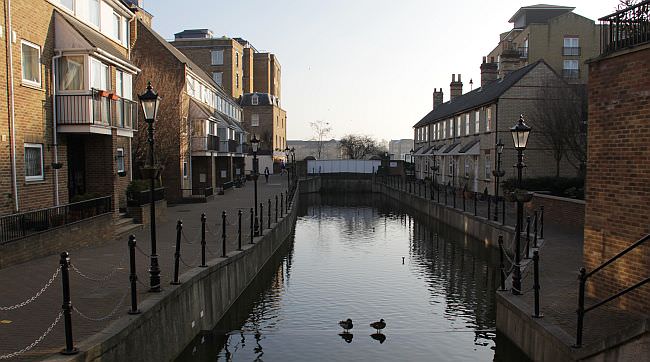 The site of the old Limehouse Lock looking towards the Narrow Street bridge, which still exists. On the right are the former lock houses 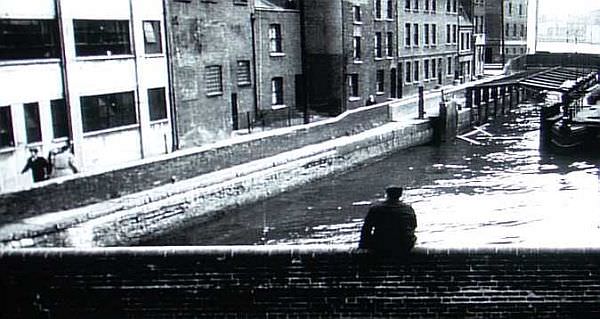 A view of the old Limehouse lock from Northey Street.
This is a clip from the film ‘Together’ made in 1954 about the trials and tribulations of two deaf London dockland residents. Its an excellent view of the lock’s setting. The wooden structure over the lock chamber is clearly seen – the building on the other side of Narrow Street still exists. It doesnt look as if there is an exit from the lock area but the canal actually takes a sharp bend immediately to the left of the picture and passes under Northey Street. The steel sides of the Narrow Street bridge are recognisable in both old and modern views. Another clue to the location is the building at the far end with five windows on its upper floors.
The old Limehouse cut left the lock where the next bridge (in Northey Street) is and after a short bend it went on to meet the current alingment 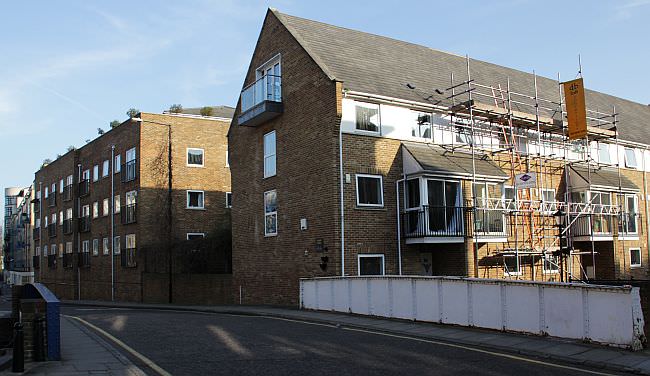 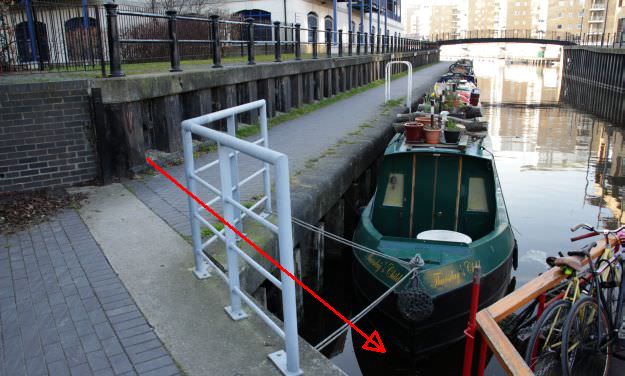 The point where the old Limehouse lock cut joined it’s original waterway. The section in the background is the new cut to Limehouse basin. 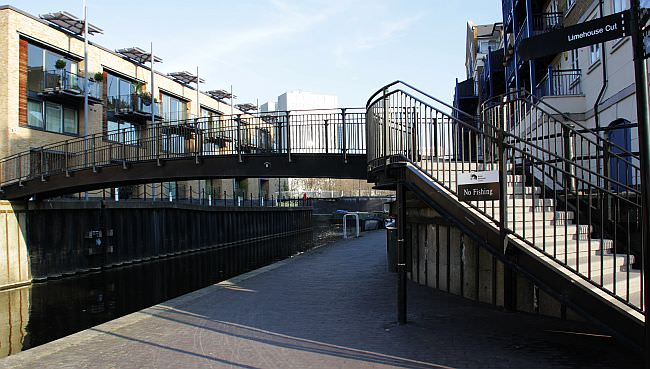 The modern footbridge over the new entrance to the Limehouse Cut
This view from the adjacent footbridge shows the edging of the old cut (where the blue fencing is) as it went straight on towards the old lock. The flats in the picture blocks the view from here to Northey Street bridge 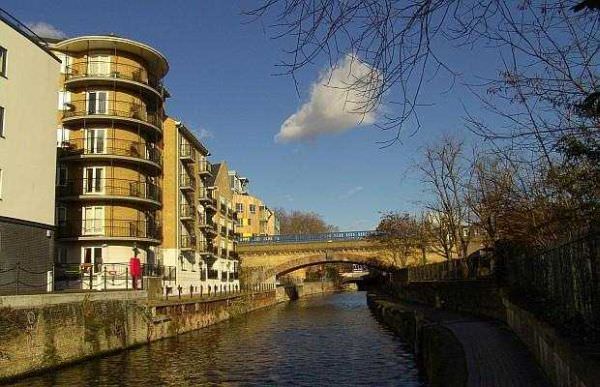 Heading out of Limehouse towards the Docklands Railway viaduct
These new flats were constructed in 2001 and the Docklands Light Railway opened in 1987, 19 years after the old lock closed. 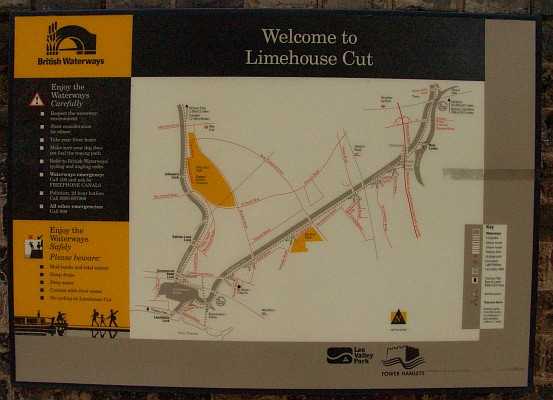 An old BW map of the Limehouse Cut.
As the map shows, the Limehouse Cut runs straight as an arrow from Commercial Road to the A102 Blackwall Tunnel road, and it is this section we will explore next But before that, for more information on the Old cut and its lock, go to: Eastendtalking and London Thames Gateway Forum Especially with the LTGF pages, look at photograph numer six, and you will see the same bollard as in my picture of the former entrance to the lock. Also in other pictures on both sites the lock houses are easily seen 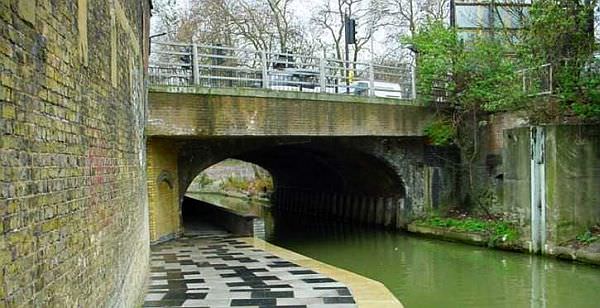 Commercial Road crosses this bridge.
There used to be a sluice gate here to keep tides out of Limehouse Basin – the grooves on the offside can be seen in the picture 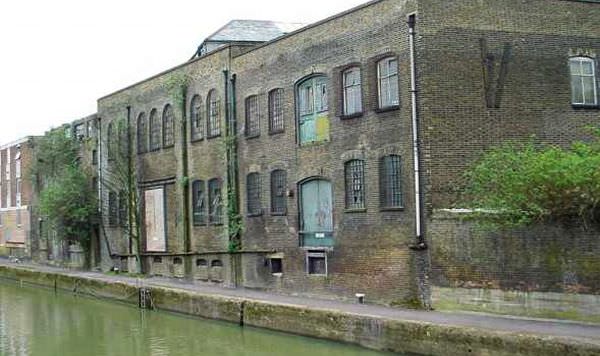 Old factory adjacent to Commercial Road in 2003, at the time of photography much equipment still existed inside these buildings. These buildings still stand in 2012. 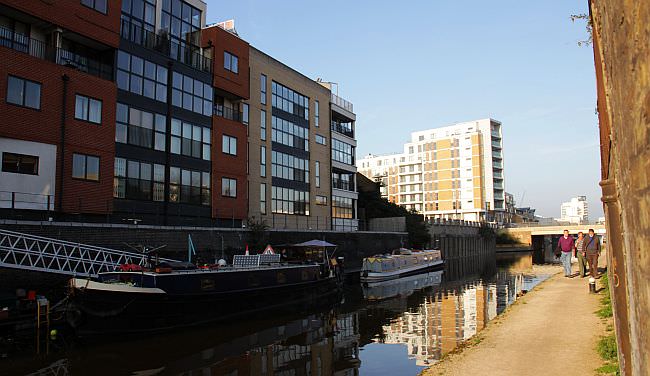 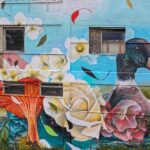