This was a 500yd cut opened in 1804 (or 1805 as some sources claim) and served Salter & Co’s Brewery. The firm’s director, Stephen Salter, paid for the river to be canalised. This was the course of the River Chess, deepened and widened, to permit boats to reach the brewery. Known as Salter’s Cut, invariably it was later extended to what became known as Rickmansworth Wharf.
A later cut was built in 1903 with a lock to give boats access to Sabey’s Pool. H. W. Sabey & Co were a company invovled in the extraction of gravel from Batchworth Meadows. The resulting pool that formed was named after the company, and what better than a direct waterway link so that boats could take gravel straight from the workings! 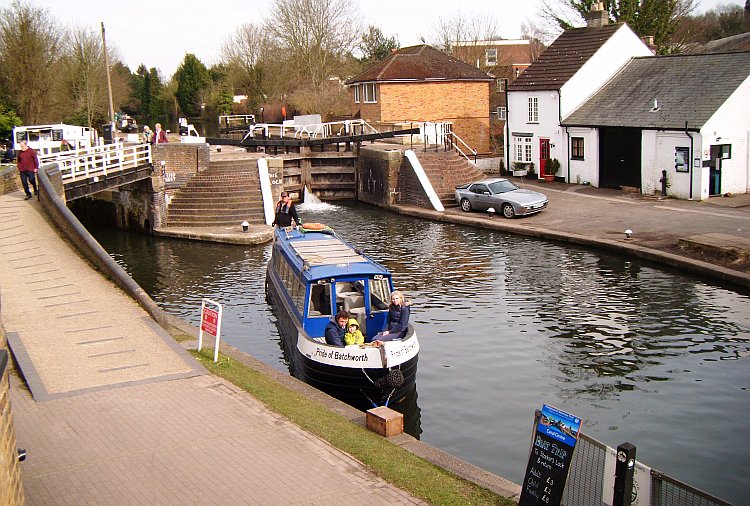 Batchworth Locks. The right hand lock is the Grand Union Canal whilst that under the bridge at left is for the River Chess. 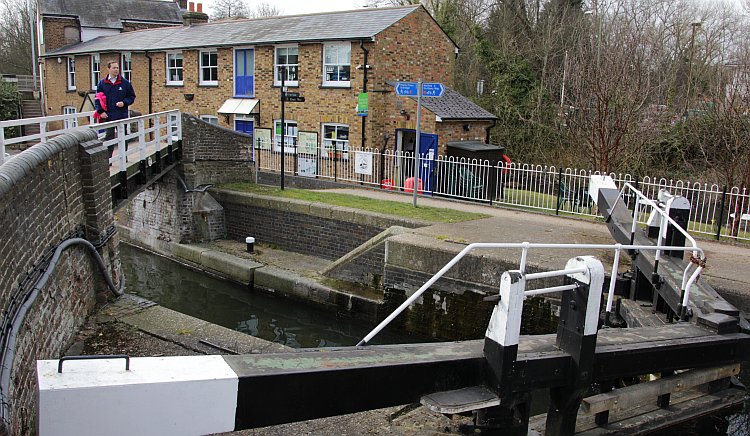 Chess Lock with the Batchworth Canal Centre behind. Its the headquarters of Rickmansworth Waterways Trust & shop. 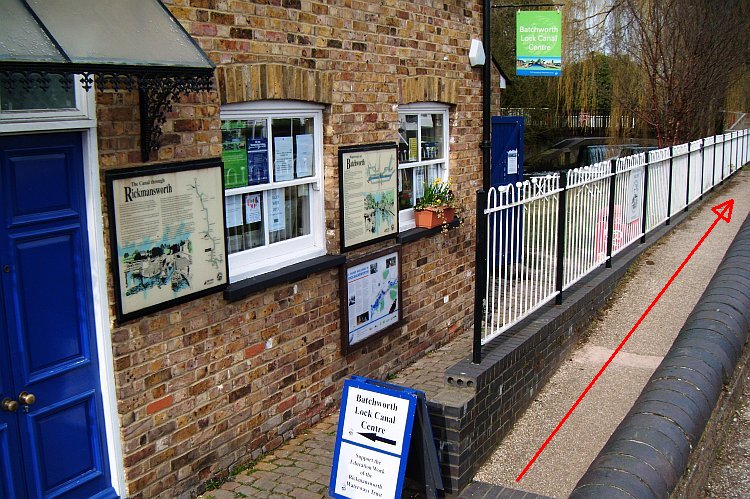 Frontage of the canal centre. The Chess towpath (red arrow) runs immediately in front of the premises.

Chess Lock (No.81a) with footbridge over the river and Café at Lock 81. The main, Lock 81, can be discerned at right.
Adjacent to the Chess Lock is Café at Lock 81 where lunch and refreshments are available.
Lock 81 is actually the main Batchworth lock on the main canal route, whilst the side, or Chess, lock is known as 81a. 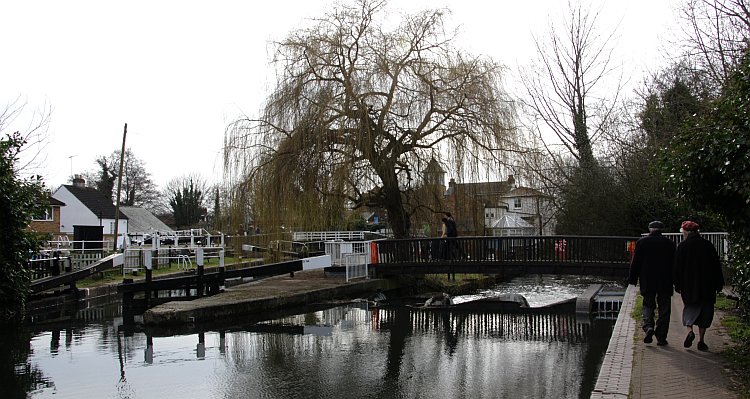 Lock 81a and the footbridge over the River Chess weir. A fish ladder can be seen at right. 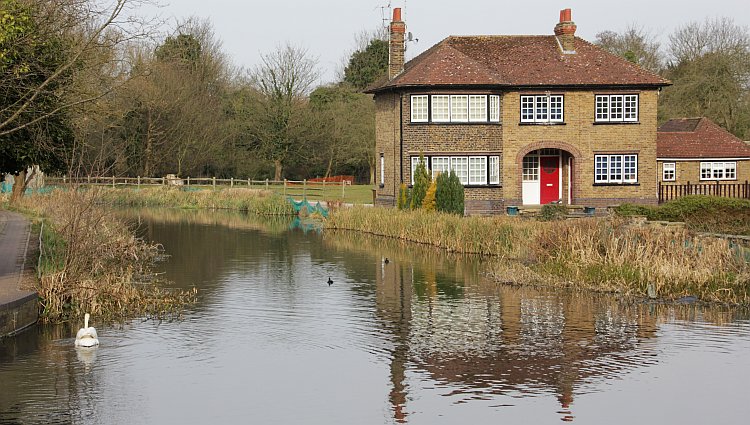 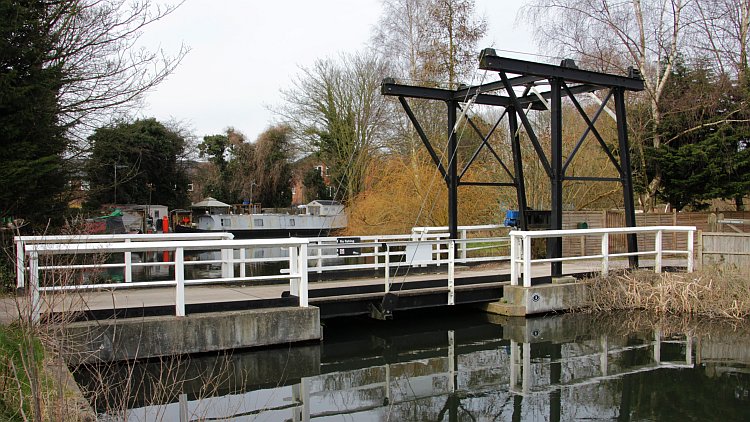 Just round the corner from Lock 81a is the former site of Sabeys Wharf. A modern drawbridge is now the major feature.
The draw-bridge is known as Sabey’s bridge, after Sabey’s Wharf. Under BW/CART parlance it is however known simply as No.2 bridge. Beyond the bridge are the first of the many residential moorings that consist a feature of this idyllic corner of our waterways system.

When one levels with the drawbridge the footpath route takes a dog-leg, as shown above, to reach Ebury Way.
Ebury Way is the former railway from Rickmansworth Church Street station to Watford. It was built in 1862 by Lord Ebury and now utilised as a country way. It provides access to the other scenes on the Salter’s/Chess cut, as well as a circular walk taking in Lot Mead lock and a return to Batchworth along the main Grand Union Canal. 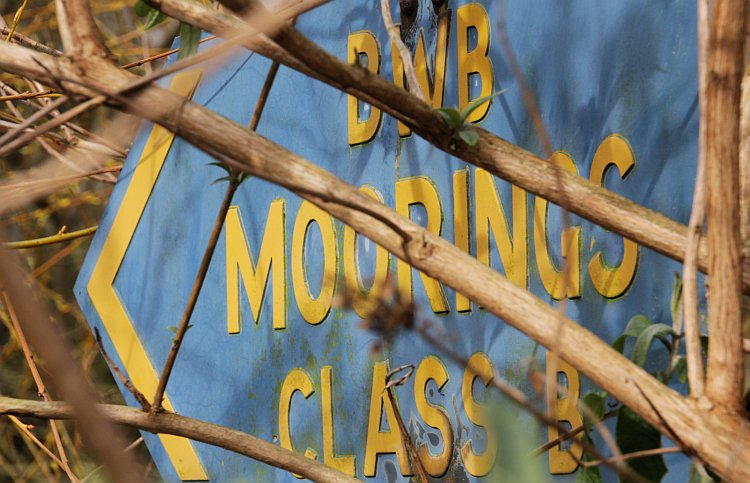 An old BWB sign. This relic from the glorious days of Melbury Land can be seen near the drawbridge. 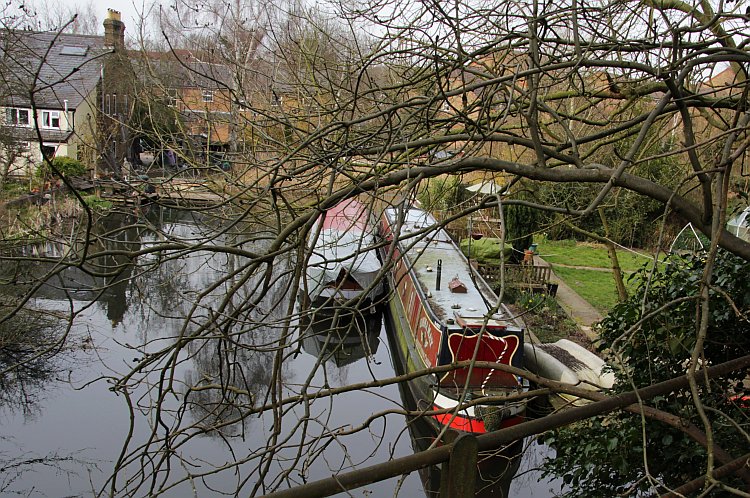 View of the other basin on the River Chess as seen from the old railway crossing that now forms the Ebury Way.
Some distance beyond these are yet more boats, and beyond the furthestmost one is the site of the former entrance to Rickmansworth Town Wharf.
A walk along the Ebury Way will bring one to Lot Mead lock – and ultimately Watford – via either Ebury Way or the Grand Union Canal. 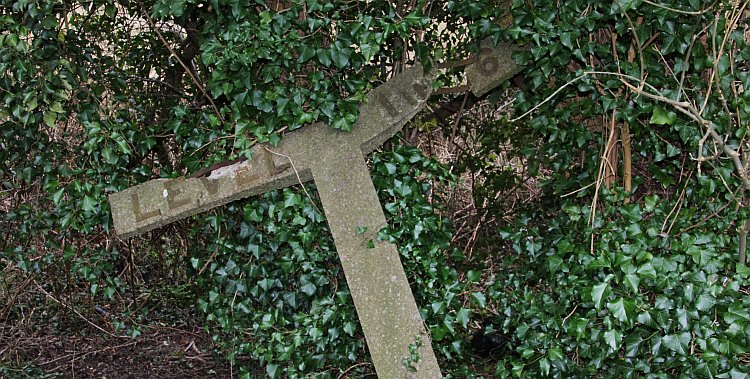 As well as the wildlife that can be seen along Ebury Way, one may also find old railway relics such as this gradient post! 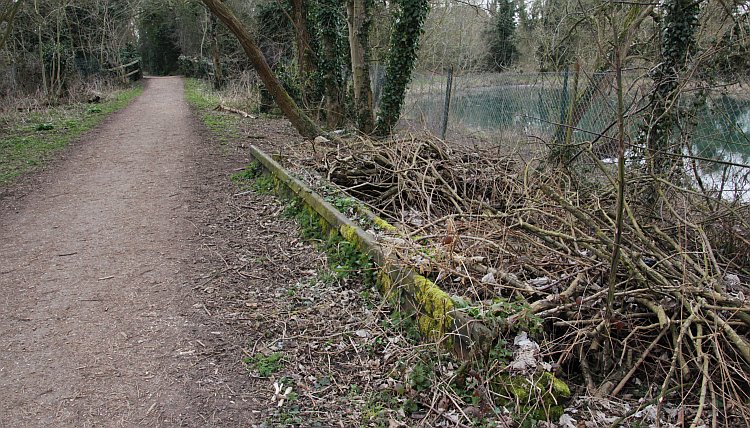 The Ebury Way by one of the many lakes it passes – with yet more traces of the old railway to Watford.
The map shown below will help to localise and place the different elements that made up the mini-waterway network above Batchworth locks.

Map showing the area to the north east of Batchworth lock (just out of sight at far left.)
The route to/from Ebury Way is shown in red. Salters Wharf was the original part of the River Chess canalisation, which served Salters brewery. The extension to Town Wharf can be seen at top. This location is identified the present Wharf Lane in Rickmansworth. The canal to Sabey’s Pool is marked as is the location of the 1903 lock to permit boats to access the pool.

Next: Sabey’s Canal and Rickmansworth Wharf