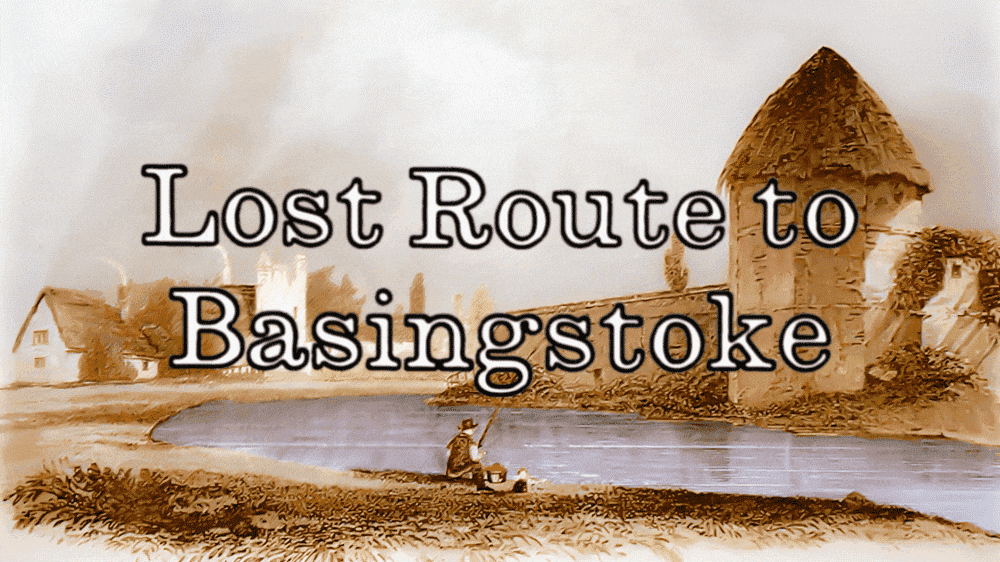 Basing House bridge still stands and forms part of the driveway to Basing House. This section has probably been the most well known and publicised part of the lost end of the Basingstoke Canal, it having been featured on Channel Four’s Time Team when one excavation strip was cut between old earthworks and the canal itself. The programme was entitled “The Royalists’ last stand at Basing House” and was broadcast on 20 February 2000. Information from the Time Team website tell us that the Basingstoke Canal was infilled at Basing House during the 1920’s. The bridge was fortunately left standing because it formed an attractive access route to the Basing House ruins.

Anyway when the Basingstoke Canal was built here in the 1790’s about 800 gold guineas were found! The view of the bridge looks towards Crown bridge, and as can be seen, immediately beyond the bridge the cutting is filled, having become part of the development on Musket Copse. 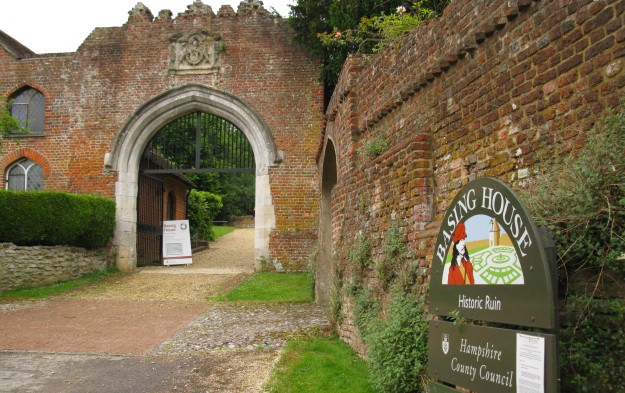 The entrance to Basing House. once through the arch, visitors cross the canal bridge to gain access to the grounds.

Basing House bridge looking in the direction of Basingstoke.

At the far end of the Basing House cutting (which as we recall, actually stretches back almost to the A30 at The Hatch) the canal emerges by the Curtain Wall, that forms so much a feature of the Basing House grounds. In these views the Curtain Wall can be seen but what is interesting is how much the area in front of the walls have been raised, so when one looks at the route of the canal past the walls, one must remember that the canal itself was at a slightly lower level than the present arrangement. There are two towers on the Curtain Wall and the roof of one of these can be seen here.

Bearing in mind the roof of the tower referred to in the previous picture, from the higher land behind, one can see the same roof, but also the office blocks that feature so much in Basingstoke. The distance to the town is about a mile, although the canal took more mileage due to forming a lengthy loop across the valley of the River Loddon. 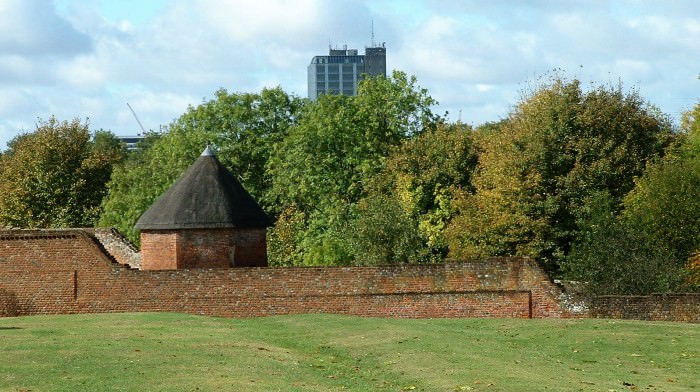 Whilst not quite the same view (below) the similarity is there. Paul A Vine’s book shows a picture taken in 1905 along the same alignment. If one compares the different views, it is clearly obvious that the Basingstoke canal stood at a lower level than the present lawn. However, there is also another difference. The canal itself stood at a much higher level above Redbridge lane. In the 1960’s, the road was raised because it was liable to flooding, and widened, and therefore the perspective has changed because the trees that line the edge of the lawn have been planted to screen the road off. 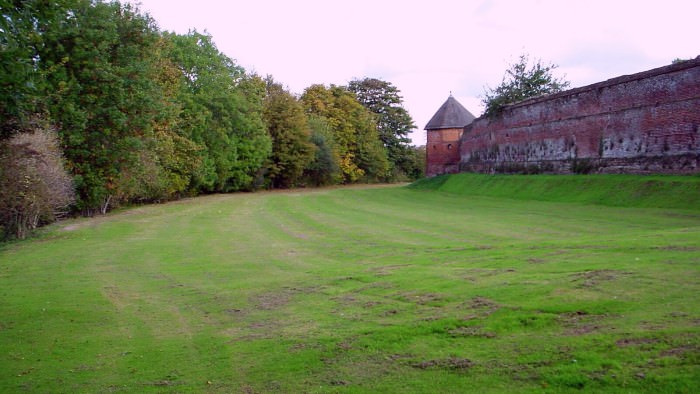 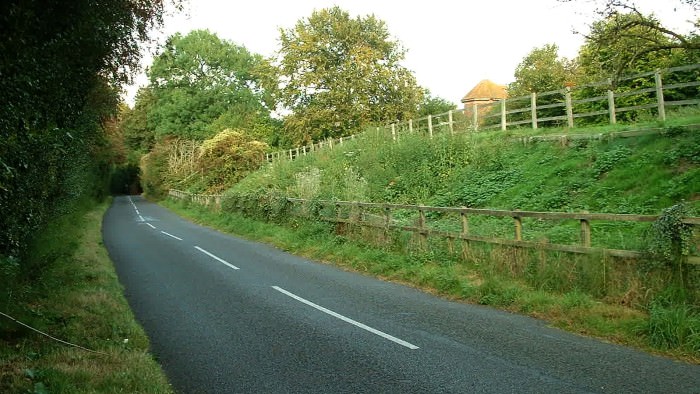 From Basing House Redbridge lane parallels the length of the canal as far as Swing Bridge Cottages. This view (above) shows Redbridge Lane in relation to the canal and the curtain walls of Basing House (the second tower can be seen behind the upper fencing.) A short distance past this point, the road rises up and takes a sharp turn to cross the canal. On the right, new development has taken place on the canal’s alignment, called Broad Water. This section of the Basingstoke Canal was indeed known as The Broad Water, being a wider stretch of canal just to this side of Red Bridge.

As one comes round the bend and over Red Bridge, it does indeed look like the bridge still stands. Well in a way it does. It is still there quite complete, but like several other bridges that we have encountered in Basing itself, this one is also buried, leaving just the lowered parapets visible. What remains of the parapets have been restored however. Red Bridge is the very last crossing of the canal route that we encounter. The next crossing, at Swing Bridge Cottages, has gone, as is the last footbridge, and Eastrop Bridge in Basingstoke.

The following three images show how the site has changed:

How the canal originally looked from the Red Bridge. Source: Andover Advertiser.

The above view is one I took looking from Red Bridge along the course of Basingstoke Canal towards Basing House in 1981. By then the bit immediately in front of the bridge had become an extended garden to the house on the corner. By the late 1990s the land beyond had been sold off for property development so more houses were built on this alignment. And of course this view isn’t even possible now as my next picture shows:

Its clear from the above view the parapet of Red (or Slaughter) canal bridge has been lowered. Whether the pile of bricks in the foreground was part of this I have no clue. Comparing this view to old photographs the shape of the former Broadwater (this being a rather wide stretch of the canal) can be discerned. The Broadwater stretched from Red bridge as far as the Basing House curtain walls in the distance.

Not a great picture – which is why I’ve never posted it! Its from 2002 and shows the same perspective along the former canal alignment from Red Bridge to Basing House. 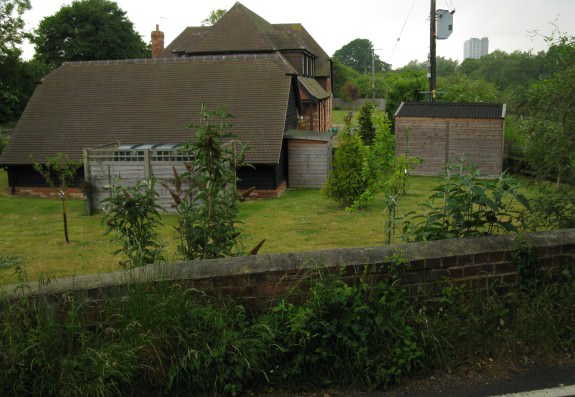 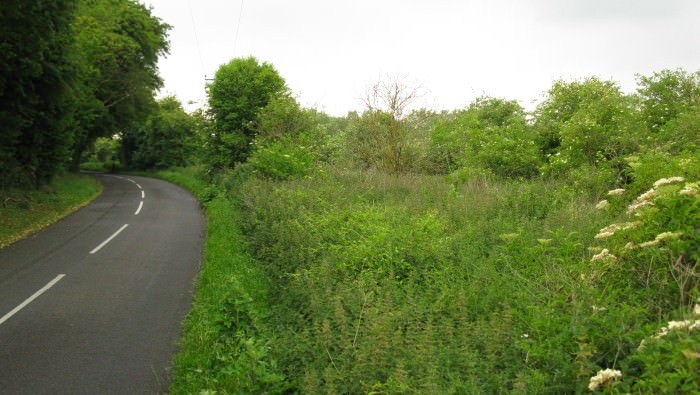 Redbridge lane encroaches on canal route. Aerial photos show the original road was much narrower and more to the south. The undergrowth along the canal prevents anyone getting onto it! 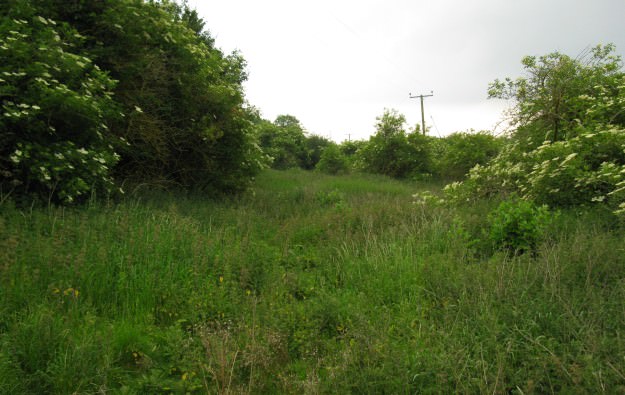 The canal alignment on Rebridge Lane has always been very overgrown, but recently I was able to scramble through the undergrowth and gain a perspective along the alignment. This is a view looking towards Swing Bridge cottages. Close examination reveals that much of the canal alignment has spoil dumped on it, as a result of the widening of Redbridge Lane.

Where this information board is sited are Swing Bridge Cottages. The route here forms part of the Basingstoke Canal heritage footpath, extending for 2 miles from Basingstoke to Basing House. The course of the canal is not easy to discern now having been infilled. Those electricity poles do give a clue to the former alignment. 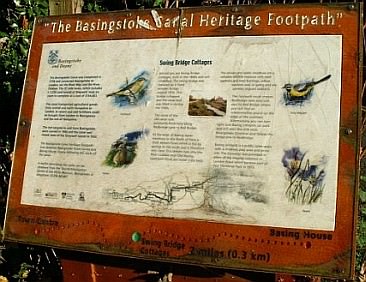 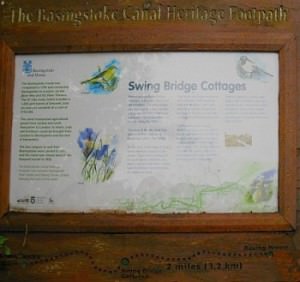 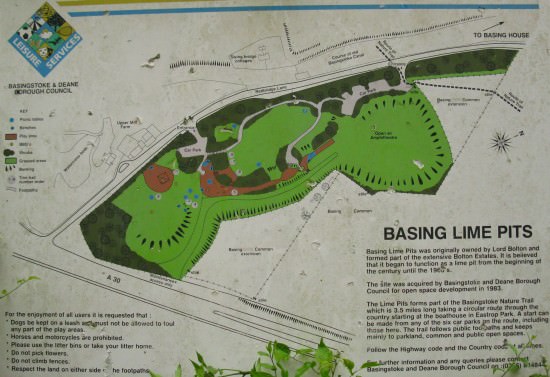 Board at the entrance to Basing Lime Pits. The course of the canal is shown at top.

Just past Swing Bridge Cottages, Redbridge Lane veers off towards Black Dam, whilst the canal begins to form a loop round towards its crossing of the River Loddon. About here, is Basing Lime Pits. Although they are virtually next to the canal, no waterborne traffic seems to have originated from here. It may be because the pits began in the early 1900’s when traffic to Basingstoke had ceased. At one time, the infilled canal was used as a cycleway between Basing and Basingstoke, commencing just past Swing Bridge Cottages. No trace of this track now remains, which left Redbridge Lane opposite the lime pits and gently sloped down onto the canal’s alignment, although a pair of gate posts indicate the start of it. As well as being used as a cycleway between Basingstoke and Basing, during the hard winters of the late 19th century, the canal was a popular race track for skaters between Basingstoke and The Broad Water at Basing!

Next: Ringway East to Basingstoke