Looking from the former canal entrance, across the coal pier, towards the Woolwich free ferry, the Thames Barrier, Canary Wharf and Central London. The flats on the extreme right are built on land where the Woolwich class narrow boats were once built.

A look at the waterway

The canal is today known as ‘Broadwater,’ but the name doesnt belie the fact that it was formerly a canal. Yes the sides have been widened, concreted and walkways provided. Only the east side walkway is useable as a through route, the west side one doesnt lead anywhere and is considerably overgrown. As for public transport to access the waterway, the nearest station is Plumstead although its defintely NO easy walking route from here to Broadwater. The best way would be to take a 380 or 244 bus from Woolwich Arsenal station to Broadwater (alight at the first stop on Whinchat Road.) The Broadwater can be seen from the bus as it turns from Broadwater Road into Goosander Road. Alternatively if one wishes to start from the river end it is best to get off at the stop before the junction of Broadwater and Goosander Roads, and walk along Pier Way, through the gap in the blocks of flats and onto the Thames path itself. Good views can be had of Central London and the Thames Barrier, and towards Barking Creek. For the purposes of this guide we will start from the Thamesward end.

The former entrance to the Royal Arsenal canal, now concreted off from the Thames. The towers of Barking Creek’s flood barrier can be seen in the distance. The only indication of the canal at this point is the existence of just one of the capstans used to assist vessels into the lock chamber. 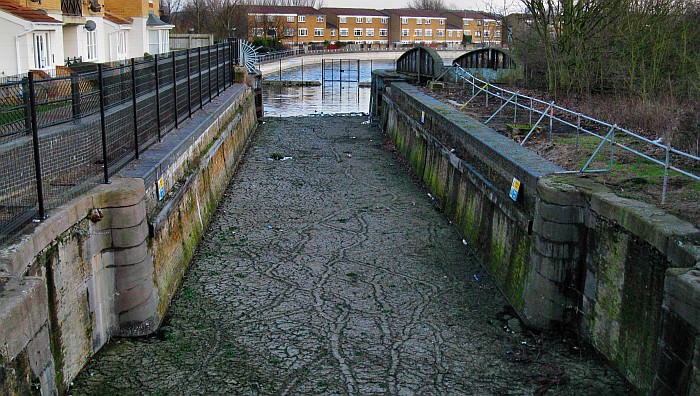 On the other side of the concrete flood barrier one can see the Royal Arsenal canal’s entrance lock. The inward seaward gates have long gone, but the top gates and the swing bridge survive. There is clearly some similarity in the design of the structure of this lock and those on the Isle of Dogs Canal. I suspect Colonel Pilkington, who had absolutely no canal building expereince, used the earlier 1805 canal as a model for his military version. 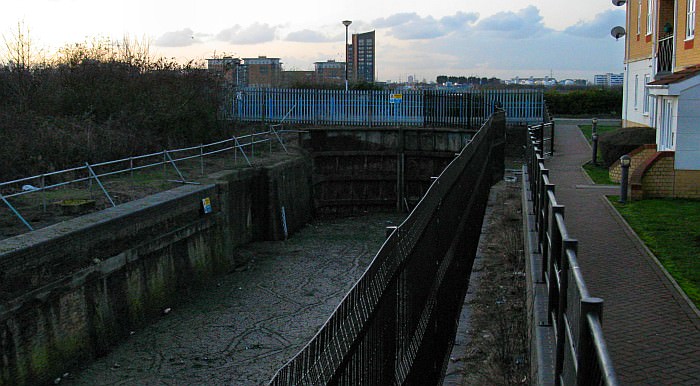 The outer seaward gates can be seen in this picture looking to the Thames. The only reason for their existence is because they have been encased within the concrete flood barrier. All the gates were curved, following the examples built on the Isle of Dogs canal. 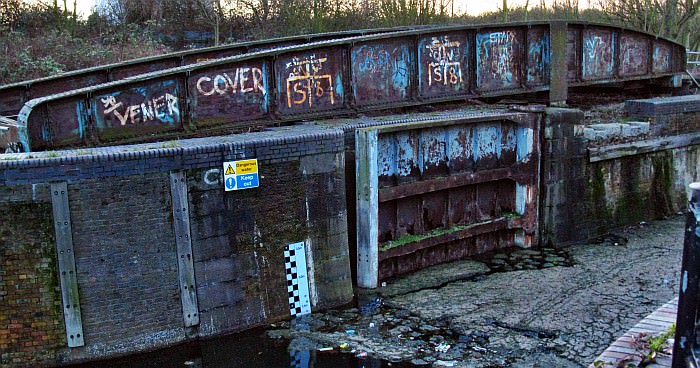 The top gates and the swing bridge. The gates’ curved structure is clearly visible. Notice the rather new wooden fendering, installed I presume in the hope that the lock would be used again one day. It is not known when the swing bridge was last used, maybe something like 35 years prior to these pictures being taken. 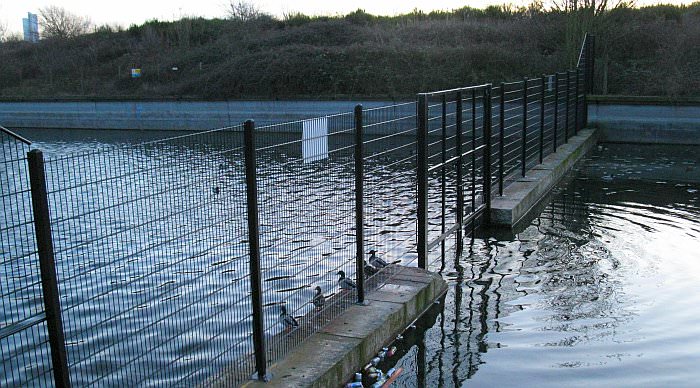 I dont know what this is. Its just above the head of the entrance lock. It seems someone doesnt want people boating into the lock chamber, but nevertheless its a bloody eyesore. Its a good example of how planners and property developers f… up our waterways! 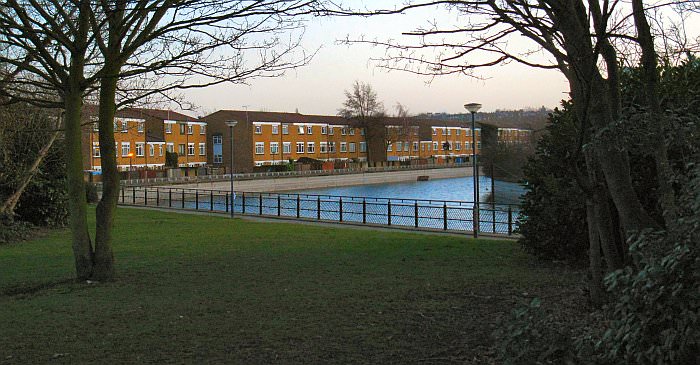 Arguably the prettiest view of all on the canal! A view looking across the small park just off Warepoint Drive to the canal (aka the Broadwater)

Looking due south towards the innnermost extremity of the present waterway. It was about halfway along this stretch that the Royal Arsenal canal was truncated in the thirties. The hill in the background is Shooters Hill. 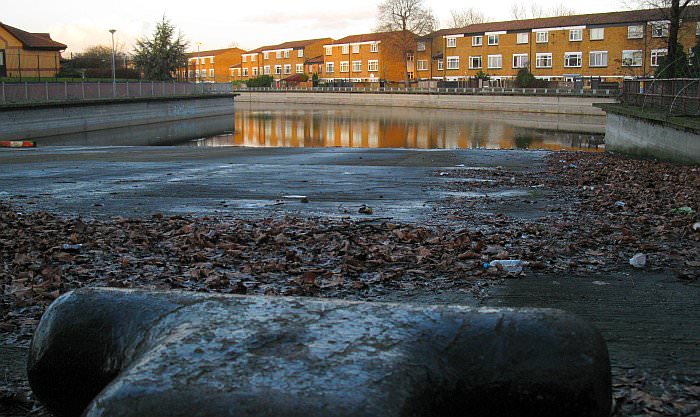 The end of the Broadwater (aka the Royal Arsenal canal.) One of the two large mooring bollards that were used on the canal can be seen. The extra bit of waterway at this end uses part of the Northern canal route. The southern canal route continued across what is now the junction of Whinchat Road and Goosander Way, then towards the roundabout that forms the junction of Broadwater and Tom Cribb Roads.
*Many thanks to Ian Bull, the Crossness Engines Trust and the Royal Arsenal Woolwich Historical Society, for their added input, pictures and history.*