Anerley Tea Rooms and Gardens were a popular tourist destination in Victorian times. A great day out for all was had with a boat trip on the canal, a walk through the gardens, beverages in the tea rooms, then a trip up to Crystal Palace to round off the day
This stretch of canal was part of the Anerley Tea Rooms leisure gardens which survived into the late part of the Victorian era and so it has not suffered so much obliteration in terms of tracing the alignment 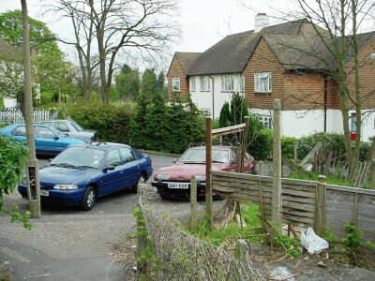 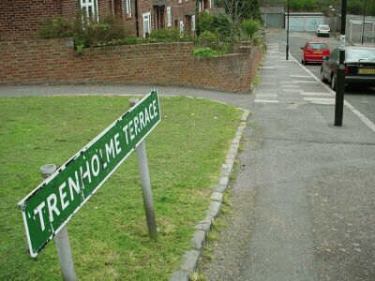 After the industrial estate at Meaford Way, south of Penge West station, these properties in what is known as Trenholme Close (above left) reflect the canal’s alignment. The route of the canal passed to the right where Trenholme Terrace is. In the picture (above right), where the red car is parked, the canal’s route passed left to right towards Croydon. In the picture below left, the red car is actually parked behind these large bushes. The canal’s alignment ran along here towards Castledine Road (which is behind the photographer.) 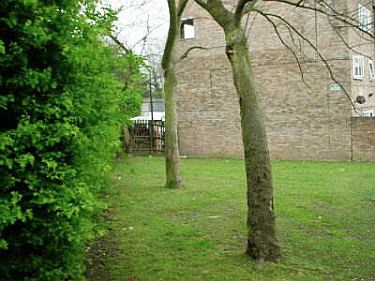 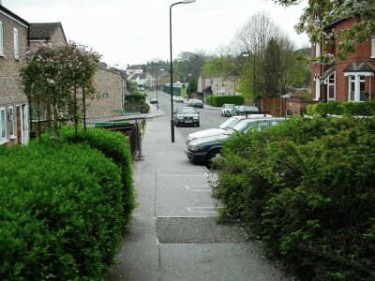 Turning 90 degrees to view Castledine Road (above right.) The Croydon Canal emerged from the bottom left corner and passed roughly where the red brick house is on the right. Back in the 1860’s, the whole section looking from this point to the end of Castledine Road would have been a vista right down the centre of Anerley Tea Gardens with its bandstand in the centre. On the left would have been the popular maze, and round the hillside would have been the canal itself – used for boating and fishing. Despite the whole area having been built upon with newer properties of the second half of the 20th Century, in places remains of the canal can be seen such as at the rear of properties on the west side of Castledine Road (below.) It ran between two schools, again on the west side of Castledine Road, and the boundary between the schools is clearly the canal’s boundary

Just past this point, to the left and behind the photographer, the route of the canal curved round towards the Anerley Arms, located in Risdale Road. The route of the canal along here dramatically followed the contours. Past the Anerley Arms it took yet another loop round the hillside towards Betts Park. The only remaining feature that has any links to Tea Gardens days, is the building on the right (below.) This is the Anerley Arms. Inside one can find plenty of pictures and other memorabilla linking it to the Croydon canal and ‘Tea Rooms’ days. The houses on the left opposite the pub are built on the far side of the canal’s alignment, and here the canal’s course can be envisaged as one observes the broad sweep that the houses form 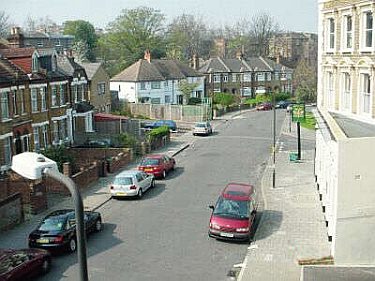 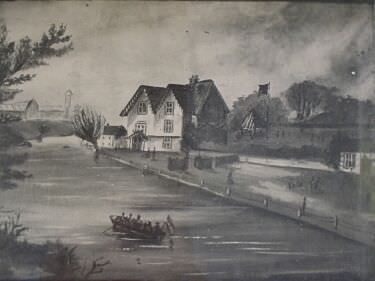 – RH view by permission Croydon Local Studies Library –
The photograph (left) is taken from the railway footbridge at Anerley station. The old painting of the Anerley Tea Rooms section (right) cannot do justice to modern day perspectives as the railway from London to Croydon actually crosses at this point, and some artistic licence has clearly been used in the painting because the railway is ommitted! The public house is in the same location in both pictures (though it has been rebuilt.) As can be seen in the painting the former Crystal Palace stood on the hill. The parked red vehicle on the right would have been a boat moored outside the inn, awaiting day trippers looking for an afternoon of idylic pleasure. Note how the alignment of the upper floors of the latter day public house matches that of the orignal building 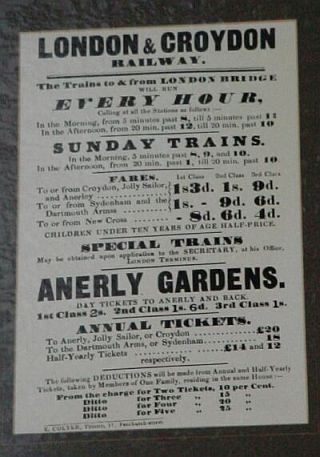 Inside the pub is a poster advertising the Anerley Gardens by train from London or Croydon. Beyond the pub, the railway bisects the old canal alignment at Anerley station and then round Anerley Hill

Though the canal was bisected by the London – Croydon Railway, a section on the Croydon side remained in water long after closure. Like the Tea Rooms section it was used for boating and fishing. Looking from the footbridge (below) across the down platfrom, the canal went diagonally from right to the left edge, before sweeping round to enter Betts Park cutting. Note at the centre top of the picture a squat building behind the superstore… 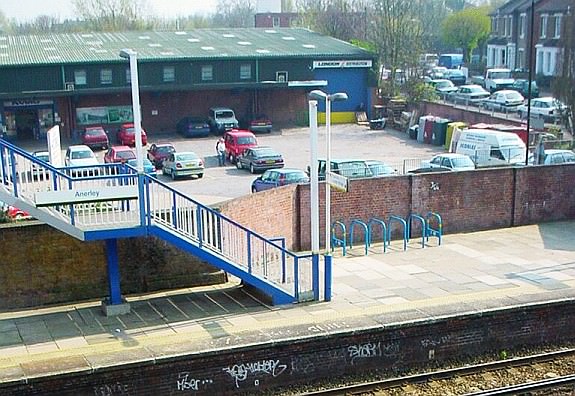 Here the squat building can be seen with its retaining wall (below left) but what is more important is the view looking up this slope. When the canal existed, one would have looked up to the canal as it traversed the hillside. The flat section at the top of this slope is certainly the former level of the canal 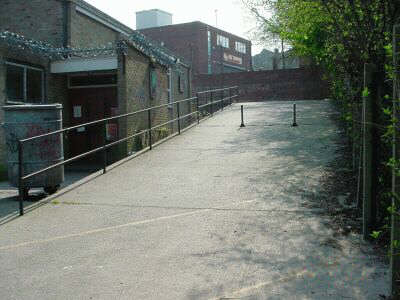 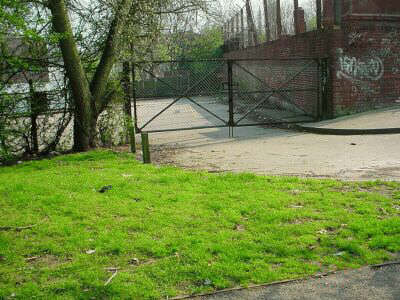 This view on the other side of the superstore, shows the parking lot which serves the Methodist Church nearby (above right.) It seems quite convienently placed but this is actually the level of the canal. Beyond the canal swept round the hillside to enter Betts Park cutting 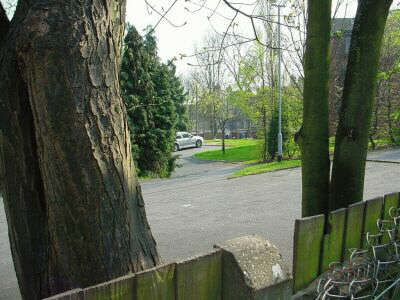 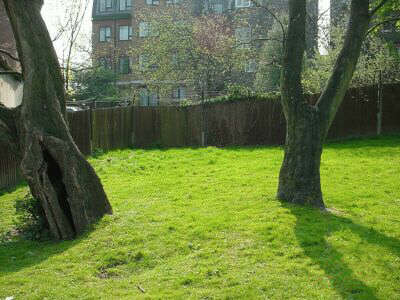 Looking through a gap in the fence on the far side of the Methodist Church car park (above left) the car parked in the far distance is approximately where the canal was sited as it swept round into a cutting. Behind the car can be seen houses in the distance. These house flank the road opposite Betts Park. Looking south from near where this car is parked (above right) we are standing on the course of of the canal. In the centre is approximately where the cutting is. The modern building is a block of flats for people with special needs. Its ground floor is actually the first floor in this view here, and the large windows are in the basement flat at the rear. If one were to take the exact centre of the picture, this is the level of the canal in Betts Park behind these houses and on the far side of the main road.