Perseus is seen here approaching the west portal of Lisson Grove tunnel – another boat having just come through it. The steerer was Mike, who had worked for the London Waterbus Company for many years, and this was his last year on the waterbuses, it being 2002. He had joined the company in 1983 and lived on a houseboat at Cumberland Turn

Above left: Having left Lisson Grove tunnel, Jason makes her way towards Maida Hill. A bus (on either route 139 or 189) is passing along Lisson Grove itself. The current Jason narrowboat dates from 1958 and once served under the Thomas Clayton banner. Above right: Wear and tear from boats in the stone work at the west portal of Lisson Grove tunnel. Compared to Maida Hill the portals at Lisson Grove were more elaborate – perhaps either signyfying the importance of the land it passed under or as a visual improvement to placate the land owners and locals for having to build the canal on this alignment between Paddington Stop and Park Road – a route that involved the demolition of houses and a new road that had not long been built – of which Aberdeen Place is its stump. So much trouble was involved trying to placate landowners and locals in finding a way from Paddington towards Regents Park – but of course as a result we have these two canal tunnels!

Despite being just fifty yards long (above) its quite lengthy once inside, otherwise it looks to all purposes and intents a bridge of sorts with a house lumped on one side of it! The eastern portal, as shown in these views (below) is (or was) quite elaborate for any of the canal tunnels in London. At one time there would have been a earth bank, perhaps grassed over, from the portal up to Lisson Grove itself, but the Upside Down House now occupies that space 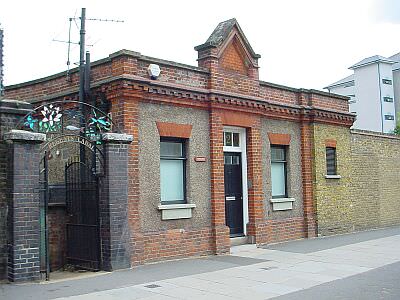 This is a view of the Upside Down House (officially called Canal House) from street level. It looks like a very small country cottage. Its main entrance, seen here, is at street level whilst its lower floors sit astride the tunnel portal. The house may give rise to the idea it is a bridge – since buildings are common on bridges worldwide, such as Pulteney bridge in Bath. The gate gives access down to the canal.

NEXT: The tunnel paths