Along Greywell Road and the motorway 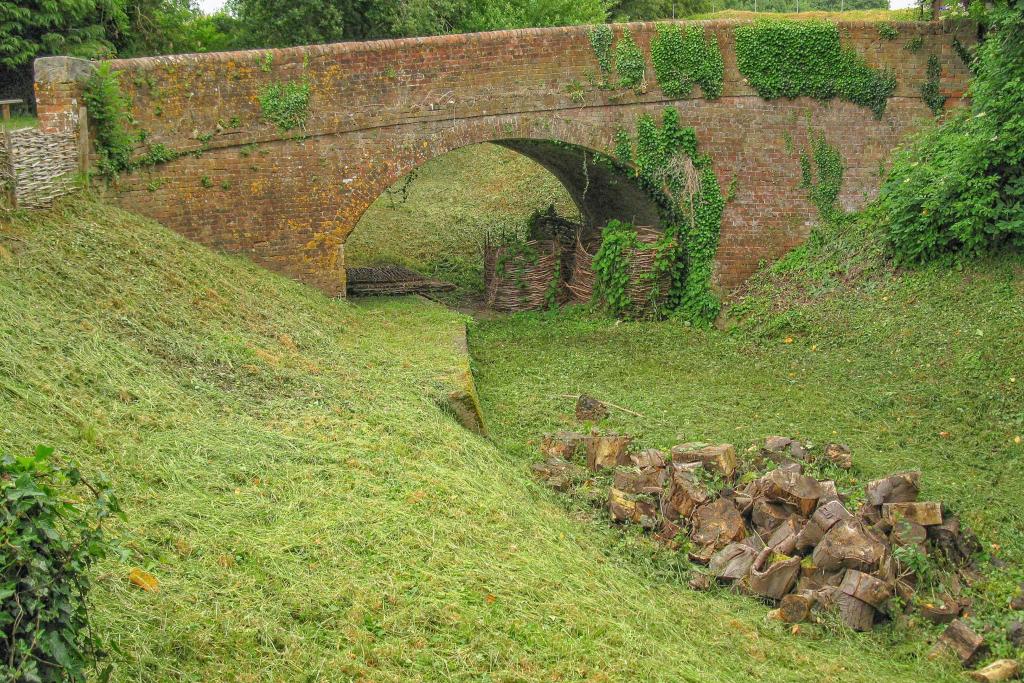 Past Frog Lane the canal passed through a small copse before emerging onto this field, which of course was bisected by the canal when it existed. The upper section of field that has been turned over actually marks where the canal was as it ran along the boundary between the two different sections of the field, across the centre of the photograph, the canal passing from left to right to Basingstoke. Greywell Road is out of sight beyond the clump of trees on the far right, but is seen in the next picture.

Course of the canal (marked in red) across fields parallel to Frog Lane. The houses are part of Mapledurwell 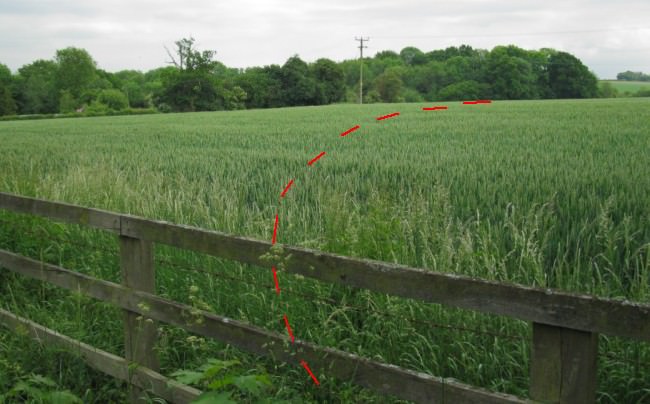 A continuation of the route from the previous picture, this time looking from the Greywell Road. The red line indicates the canal’s approximate route as it crossed the field from Frog Lane (sited within trees in distance) to Greywell Road whose boundary is marked by this fence

The new Greywell Road on the route of the canal (the parked cars are on the old Greywell Road)
The old Greywell Road, leading towards The Hatch – now severed and replaced by the new road that crosses the M3 – was on the right – where the parked cars are. Greywell Road was widened to this point, and then diverted away from this point to the left, thus joining the former Basingstoke route as it came across the fields from Frog Lane. Previously both canal and road ran parallel for a short distance towards Lukes Bridge.
Below: Basingstoke Canal circa 2002. The car is at the point where Lukes Bridge once stood. There is nothing left of the canal on this section, save for the hedges on the left hand side, further up, which are obvioulsy part of the canal’s southern boundary, as seen in the picture at the bottom of this series. 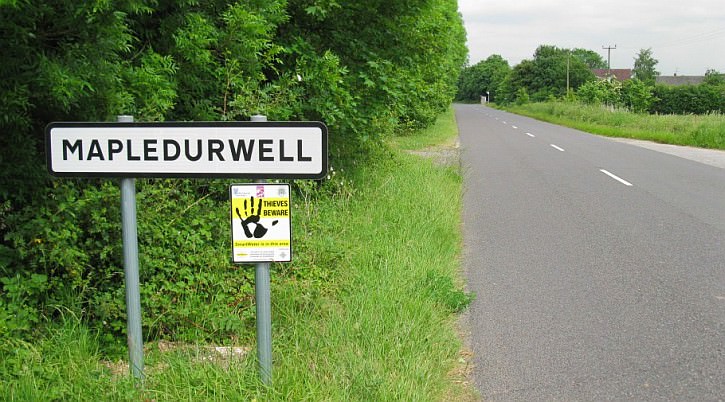 Mapledurwell was often billed as a location on the Basingstoke Canal. Here is a modern day view of the entrance to the village – without the canal of course! More than a hundred years ago this would have been a towpath walker’s view looking along the Basingstoke Canal towards Lukes bridge. This 2009 view shows a sign saying thieves beware – ever wonder who were the people responsible for stealing the canal?

Looking in the other direction along Greywell Road, where it climbs to cross the M3. It leaves the southern boundary of the Basingstoke Canal quite visible as both routes now take different alignments. The red lines mark approximately the canal. The modern fencing and electric cable masts clearly mark the former canal’s southern boundary

Recent work installing this new fence has at least cleared the area immediately before the M3. This is a view looking along the Basingstoke Canal alignment towards Hatch. The nearer, new, fence is about in the middle of the canal alignment whilst the farther fence marks the west boundary of the canal. Greywell Road is up on its embankment to the right rising to cross the M3. In this and the previous view the same electricity pole can be seen.
Greywell Road, at its crossing over the M3 (shown below) parallels the canal’s route, as the former route also turned to the M3. The lorry on the right indicates the canal’s route as it came out of the trees, and the van on the left (car overtaking it) is on the canal’s alignment where it then began to curve towards the photographer. The centre of the eastbound carriageway is approximately where the canal’s southern boundary lay as it progressed towards the footbridge. 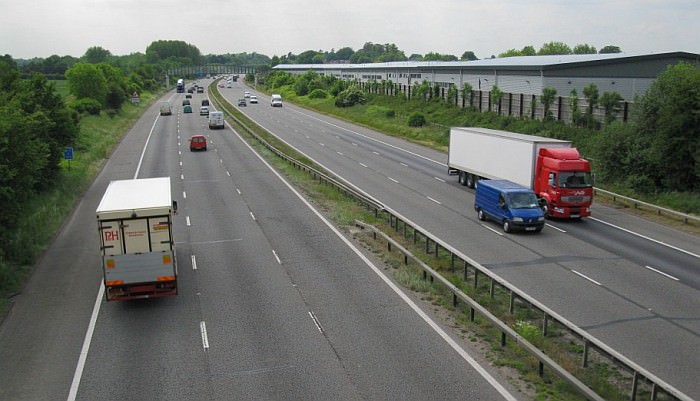 These units have recently been built (2008) on the alignment of the Basingstoke Canal. More of the canal alignment clearly obliterated (or is it stolen?) One does wonder if the council has any serious aspirations about extending the canal back into Basingstoke. Compare with the older views below

Another view of the M3, again from Greywell Road Bridge – the Basingstoke Canal ran along the right side of the motorway – the flat land where the two fences lie being part of the former canal route, although the M3 took up a larger part of the canal’s alignment. The footbridge in the distance gives a good view of the canal’s alignment as it passed along here and back across the M3 towards the trees on the far left, before making a great sweep round to the right and back across the M3, passing behind the buildings seen amongst the trees near the top right of the picture. The red lines show roughly where the towpath was, the canal itself being to the left and so its centre is more or less akin to the motorway’s boundary as marked by the fence alongside it. The red line across the motorway show the canal’s alignment as it headed south into the trees before looping back northwards to enter Old Basing

The north end of the footbridge stands on the canal’s alignment, as seen here in this view. The photographer is standing on what was the northern side of the canal’s boundary, and the slight, but detectable footpath, as it curves gently to the left towards the larger tree in the middle of the photograph, indicates the former canal’s route, the red lines marking approximately the former towpath. 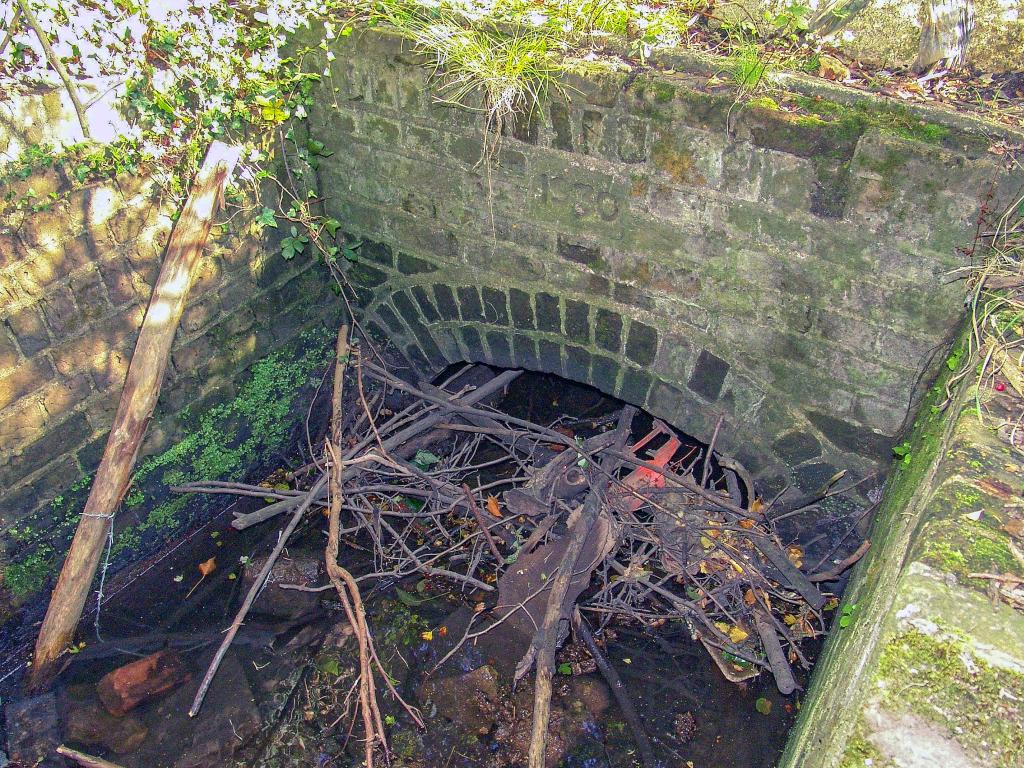