The canal route marked by trees near Ringway East
The tall building is the AA’s headquarters and its known as Fanum House. It has a claim to be the tallest building between London and New York!
Nearer and nearer to Basingstoke, the canal route remains quite traceable, but not for very long. After crossing the River Loddon (there was never an aqueduct at this point, just a simple culvert which still exists.) the canal loops back to the north east on the other side of the valley where Swing Bridge Cottages are. The Basingstoke Canal heritage trail bisects the river valley and crosses Basing Fen to emerge on this rather sorry looking piece of heathland (above) now often used as a racetrack for moto-cross enthusiasts. The canal’s alignment is within these trees ahead, and the heritiage trail enters the trees to run along the former canal itself. This section is the very last substantial length of the former canal still in existence nearest to Basingstoke.

The route of the Basingstoke Canal Heritage Trail on the canal’s course itself, with the access gate onto the canal just out of sight in the undergrowth. In the 1960’s when this section was used as a cycle path, the canal’s course was well defined with trees and hedges bordering the route on either side. Now it is a jungle and it can be a stuggle to explore the section to the south away from the heritage path. At the far end, the canal’s route ends abruptly as it meets the large loop that forms off Ringway East to connect with Churchill Way. Beyond here there is very very little left to see of the canal itself. All that remains is the former alignment on the other side of the Ringway as used, initially, as a cycle path, and then as Eastrop Way. The outer circle of this loop by Churchill Way is a cycle and pedestrian route, and once one is out of this gate its a left turn along the cycle & pedestrian route in order to walk along the canal’s alignment into Basingstoke itself. 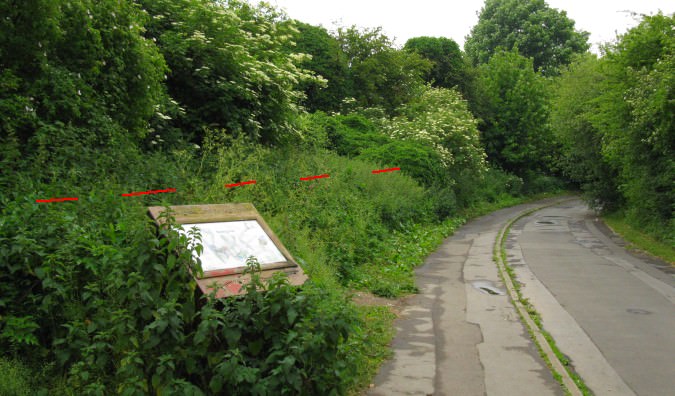 The canal heritage trail looking towards Basingstoke. The red line marks the approximate line of the northern canal boundary.

This is the end of the canal as it loops round from the Loddon valley to meet Churchill Way. This view looking eastwards is along the canal’s alignment, though it no longer exists here. The red line shows the approximate northern boundary of the canal from the heritage trail information board. It turned to the right at the point where the bridge abutments are towards Eastrop Way. The underpass (below) is certainly the pedestrian route from the canal at Churchill Way to Eastrop Way but it is slightly to the north of the canal, whose alignment is now under the Ringway East itself to the left of the picture.

Ringway underpass gives access to the next section towards Eastrop Way. DO NOT USE THE ROUTE INTO EASTROP PARK!! 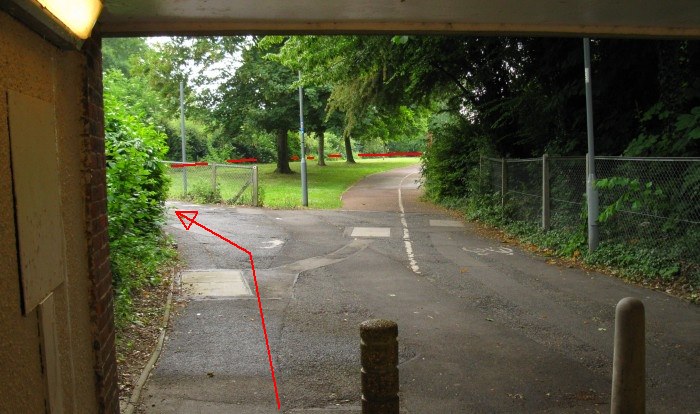 Looking from the Ringway underpass towards Eastrop Way. The heritage train follows the direct pathway into Eastrop Park. Actually the canal was further to the south – its north boundary is marked by the red line in the background. The red arrow indicates the correct route to gain access to the canal alignment.
We now come to the final section of the Basingstoke Canal. The route of the canal, after it was sold off, remained as an access track off Eastrop Lane for farmers, and subsequently also as a cycle lane to Basing. In 1961, major developments began to take place in Basingstoke and the surrounding area, with roads being added or altered. The (then) new Basingstoke Bus Station was built on the actual site of Basingstoke Wharf, although the frontage to the wharf itself on Wote Street, remained a little longer until the New market development took place. The track that extended along the canal route eastwards of course became Eastrop Way itself. It is doubtful if any orignal trees along the canal’s alignment remain – with the exception of possibly just one.
As for Basingstoke itself, the last bridge at Eastrop Lane, was dropped and the canal culverted in 1927. Basingstoke Wharf was sold off in 1936 and soon became a depot for the local bus company. In 2002, the centre of Basingstoke has changed once again, and the bus station of 1961 has been swept away, replaced by a new bus station aligned south to north, although its southern end is still on the location of part of the actual wharf. If one walks through Eastrop Park on the south side, the slopes that carried the canal’ s route above the valley of the River Loddon can still be seen in places. However, the canal’s actual alignment is now Eastrop Way.

View along canal alignment towards Basingstoke
This view looks west to the Roger Morris sports centre in the direction of Basingstoke. The trees on both sides mark the canal’s approximate boundaries. Beyond the Sports Centre, the canal route becomes Eastrop Way.

Eastrop Way looking west
Was this tree there when the canal existed? Its defintely an old tree and certainly although all the trees that lined the canal were chopped down, aerial photographs from Hampshire Council show one tree that stood slightly back in relation to the other trees at this location. Is this the same tree? Its been marked red in the picture below. In the distance is the ‘spire’ of Basingstoke’s new Festival Place (completed October 2002). Note: There is now a hedge along the full length of Eastrop Way, so this older picture is being used as it illustrates the tree’s situation clearly.

Despite the canal having been infilled, its tree lined course is still clearly apparent in this picture from around the early 1960’s. The remains of the canal’s route clearly existed as far as the site of Eastrop bridge and on the OS map of 1961 it says ‘Basingstoke Canal (disused)’ What was farmland is now Eastrop Park (on the right) and the land to the left is now the Eastrop estate. The aerial picture shows that Eastrop Way’s alignment follows the canal’s course exactly. With strong evidence like this, one wonders why the former canal route needs to be touted as being in Eastrop Park? 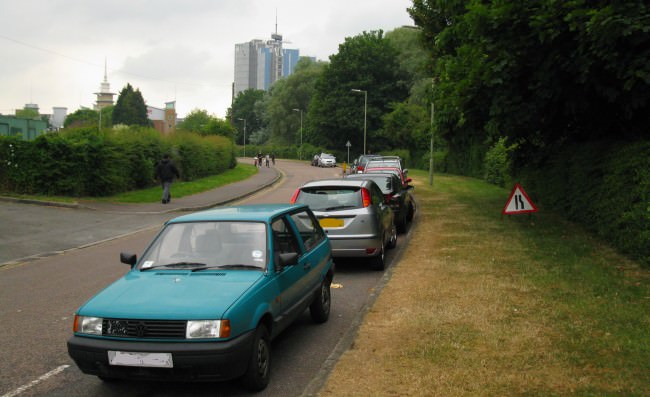 This curve in Eastrop Way shows the canal’s last sweeping curve into Basingstoke. At the far end of the curve it passed under Eastrop bridge and thence into the wharf area.

The railings with flowers on top (middle of picture) marks the site of Eastrop Bridge
Further along, nearer to Basingstoke, modern buildings make themselves more prominent, as seen above. The Basingstoke Canal’s last curves into the town are reflected here by the alignment of the present Eastrop Way. The grass verge on the right would have once been the towpath itself, whilst the hedge along it mark the canal’s northern boundary.
One of the reasons for the removal the Basingstoke Canal from the bridge to the wharf in 1936 appears to have been because it was a very popular dumping ground for animal corpses. The smell must have been intolerable at times and it seems the remedy was to remove Eastrop bridge and infill the canal. When the canal was built the area was known as Eastropland.

Just off Eastrop Way at the point where it meets Eastrop Lane, is this Basingstoke Canal heritage trail board, marking the site of Eastrop bridge. The actual bridge was to the right of the picture. The heritage trail takes one through Eastrop Park and although it does follow the canal’s route, it is not the actual canal’s alignment however. This is not made clear on neither the information boards or the Heritage Trail leaflets. Where the hedge is, what was the canal’s northern flank can be seen where its banks once sloped down to the shallow, broad valley of the River Loddon. Eastrop Park itself now takes up much of this former river valley and little trace of the river’s original course is left. 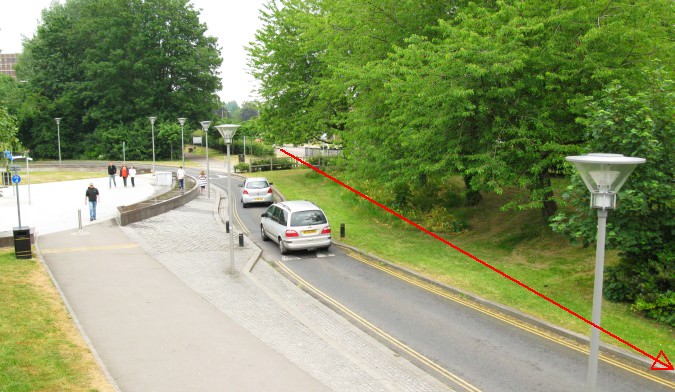 View looking towards the site of Basingstoke Wharf.

The only other mention of the canal other than the plaques is this illuminated deco underneath the gyratory road bridge.

This view looks along the old access road to the old bus station. This now forms the exit road from the new bus station! This view would have at one time looked from a point to the west of Eastrop Bridge, approximately where the timber merchants, E C White & Sons stood, towards the end of Basingstoke Wharf and of course, the furthest extremity of the Basingstoke Canal. Paralleling the canal would have been the old Goat Lane. 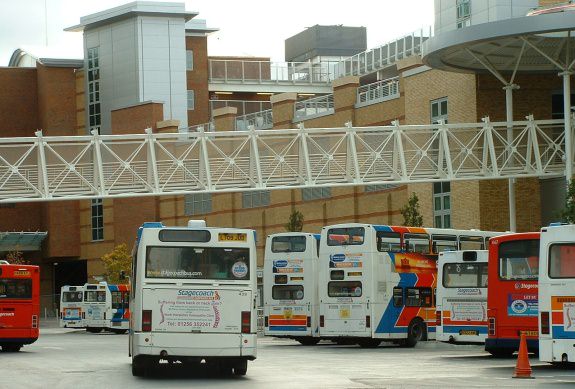 Basingstoke Bus Station and Festival Centre in October 2002
The new 2002 bus station. that has replaced the original 1961 bus station. Although the new bus station is smaller, the wharf once stood where this view now looks southwards to the new Festival Place shopping centre.

To stave off some of the confusion regarding the canal’s route into Basingstoke, this map shows the entire Basingstoke canal alignment between Basing House (top right) and the town centre (left.) As it clearly shows, Eastrop Way is the actual route.
Basingstoke & Deane Borough Council had a consultation in 1995, the objective was to bring the Basingstoke Canal back to the town in conjunction with new development. Costs were abortive, something like 27 million at 1995 prices.