The canal that wouldnt go away! The houses in Thriftwood kept subsiding and eventually the cause was attributed to poor drainage caused by the filling in of the old canal route

The house, seen above, is in Thriffwood, just off Silverdale. Behind the house is a fence forming the Dacres Wood boundary. The height of this fence indicates the removal of a low embankment for the properties at Thriffwood. Several of these houses actually sit at the level of what was once the bottom of the canal bed, and suffered subsidence problems when first built in the early 1950’s. People had to move out temporarily for about a year and a half, until the subsidence (attributed to the former canal) were resolved. Many thanks to Robert Pope for this information. After Thriffwood, traces of the canal are scarce. By train however, a sharp eyed traveller can spot trees marking the boundary of the canal as it comes behind Silverdale to enchroach partially onto the railway route approaching Sydenham Station. At Sydenham (above right) the canal was at a higher level, thus the road crossing here would have had a pronounced hump. The nearby Greyhound Inn is a descendant of older property connected with the canal. Just after Sydenham station the line to Crystal Palace leaves the main railway. This was built on the route of the canal south of Sydenham Bridge alongside what is now known as Canal Walk. From here the canal headed straight from here towards Venner Road, whose route it crossed twice in a short distance 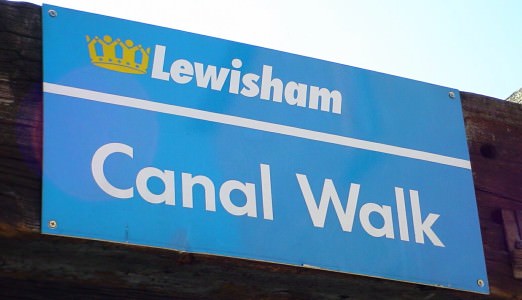 The nearby Canal Walk has an alignment that acknowledges the former route to Croydon. Venner Road (right) leads southwards from Sydenham Station. This view looks north. According to published research the canal lay to the north of Venner Road. However it appears part of Venner Road could have been the canal route. About midway along Venner Road, a change in the style of property can be seen in the form of these four houses (the large white one being the second one along.) Research shows the canal alignment was these houses now stand. The route crossed the road alignment herabouts before turning south west towards Penge