This section of fomer canal route as far as Barriedale, is on land belonging to Goldsmiths College and is not open for public access. Permission for these pictures was sought from the Goldsmiths Estate Office. A problem with surveying the old canal route along here is the amount of spoil dumped from the adjacent railway cuttings. It leaves one having to use their imagination trying to envisage how far the canal was (or may still be!) beneath this spoil. Inside the grounds of Goldsmiths College the geography is disproportionate compared to those days the canal existed. The canal began its first major climb through seven locks at New Cross Gate. As old paintings or drawings have shown, it was indeed a picturesque flight of locks, with excellent views to the surrounding countryside 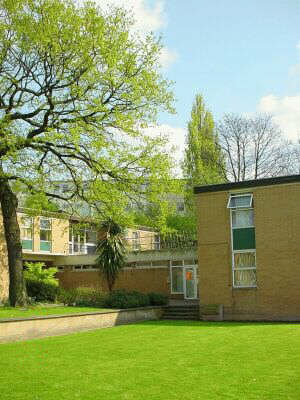 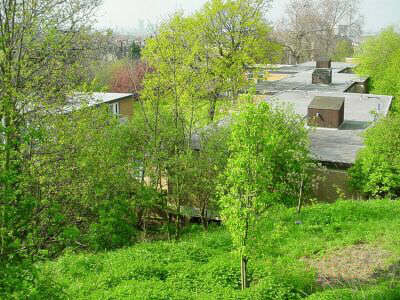 South of New Cross Gate station, the canal entered Lock No.4, and then made a turn to the south east to head straight for Barriedale ascending via five locks largely in a cutting. This view (above left) looks south east towards Barriedale, and the two large trees give reference as to the location and direction of the canal (especially the taller one!) Notice also the low building behind the trees up on the hillside
Around this point would have been lock. no7. This view would have at one time looked up the cutting with the locks climbing away towards the south east, although the level of the canal itself would have been considerably lower. The large tree (above right) in the centre is the same as the one in the previous picture
Take a look at the buildings on the right, and whilst it is just speculation, it seems quite amazing that their zig-zag alignment indeed follows the canal’s alignment! A number of buildings en route to Croydon have a knack of following the actual alignment, but what is suprising is that even though absolutely no trace remains of the canal’s alignment at Goldsmiths, these new buildings recently built for the college reflect it. This would have been a view looking down towards lock nos. 7, 6 and 5, although bearing in mind this view is from the top of what is now a spoil heap, so Lock No.7 would have been about 40 feet below the level of the photographer. At this position one would be standing near the centre of the 1815 picture – but suspended in mid-air! See the ‘View from the Locks Above Deptford.’
The tall tree that was spoken of in the first picture stands to the left behind the photographer (it can be seen in the next picture below as the furthest tree away from the photographer) This picture was taken standing in front of the low building previously mentioned (and also faetured in the picture below.) The drop down from here is quite steep, being of course spoil piled high upon the former route of the Croydon Canal 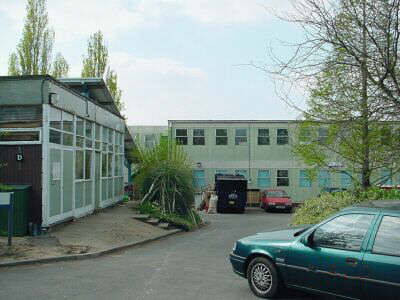 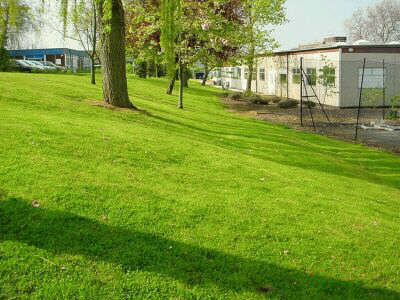 As we have already mentioned, in the above picture showing buildings and parked cars, the furthest tall tree provides a reference in tracing the the canal route. It stands in front of the low building (on the other side to where the photographer is.) This picture looks in the same direction towards New Cross Gate station, as the previous picture. It is taken on the upper level of Goldsmiths College grounds, near Barriedale, at the rear of the low flat building that we saw in the first picture. The canal ran through the centre of the picture, towards the photographer, on its way to Croydon. At this position where the parking lot is, the canal would have just left the head of lock no.8, although it must be remembered that the actual site of the lock was maybe 30 feet below present ground levels. The second view is looking north along where the longer pound between locks 8 and 9 was, maybe 20 feet or more below the present surface (the canal is climbing up southwards to Barridale.) The hillsides sloping towards New Cross have been extended with spoil from the railway, and built upon with many new facilites belonging to Goldsmiths, so it is impossible to see New Cross from this point compared to 200 years ago. The shadow of the tree falling across the bottom of the picture, is that of the tree seen (below) behind the small red tree 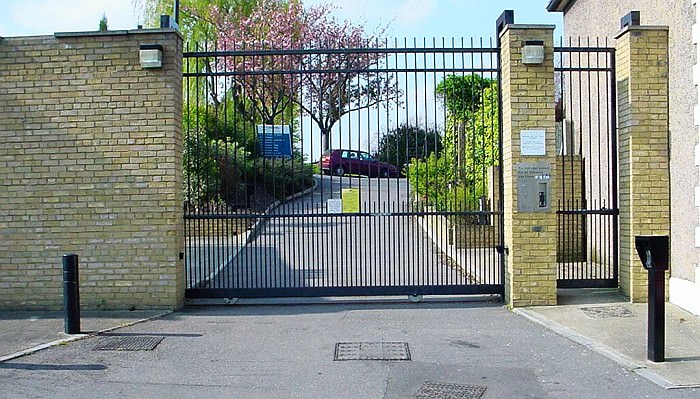 The view looks towards New Cross Gate through the college gates off Barridale. It is clear how the land has been built up with railway spoil. The Croydon Canal was slightly lower than the level of the road at the bottom of the picture. These gates mark roughly the old boundary between Kent and Surrey, and this brings us to the ‘View from the Locks above Deptford’ (below left) engraved in 1851. The fence by the head of the lock was the boundary fence between the two counties, and therefore the modern view depicted is almost at the head of Lock No.9. Modern scenes like the one above do little justice trying to envisage how the canal looked 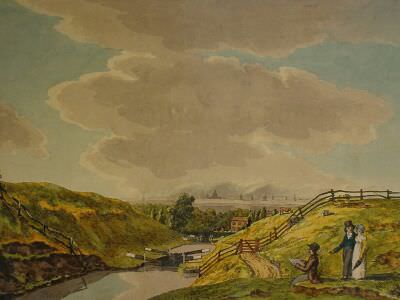 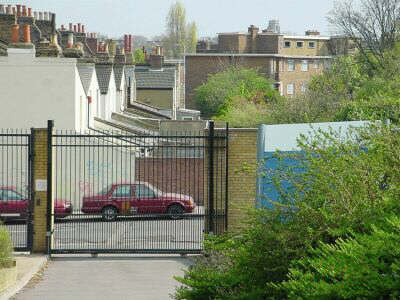 – Used by permission of Croydon Local Studies Library –
This last picture looks at the conclusion of the New Cross to Barriedale section. The view above is from Goldsmiths College grounds looking south east along the line of the canal. The cars are parked in Barriedale, and the car directly behind the gates is parked at where the tail of lock no.10 would have been. Look above this and one can see a modern square-ish block of flats. These flats are at an angle to Shardeloes Road, simply because property boundaries derive from the former canal route, and these flats reflect the canal’s erstwhile alignment as it made a right hand turn to the south to follow what is now Shardeloes Road