The Croydon and Rotherhithe company lost its opportunity for an independent route to Rotherhithe, having to share a common route with the Grand Surrey Canal. The company at this point decided to drop the ‘Rotherhithe’ from its title to become the Croydon Canal
In the years since this feature was first written, new evidence has shown that some of the published research into the canal has been in error. One common assumption was that the canal was built over in its entirety by the new London and Croydon railway. However new evidence has shown that very little of the old canal route was actually built upon by the new railway. As an example the railway and canal route have been shown to have existed through New Cross quite independent of each other, with the locks apparently still in use! The canal existed to the west of the main railway lines, and then diverted to the east side on the land of what is now Goldsmiths College, so it is possible that the canal remained in use whilst the heavy earthworks were underway to build the incline from New Cross to Honor Oak, and it could have remained for a time after to serve the New Cross area via the first few locks, with a feed coming down the remainder of the now superseeded locks. It is quite obvious that the canal was used to assist in the construction of the new railway, and despite many sources giving the closure of the canal as being in 1836, it is clear the canal operated for at least a further year 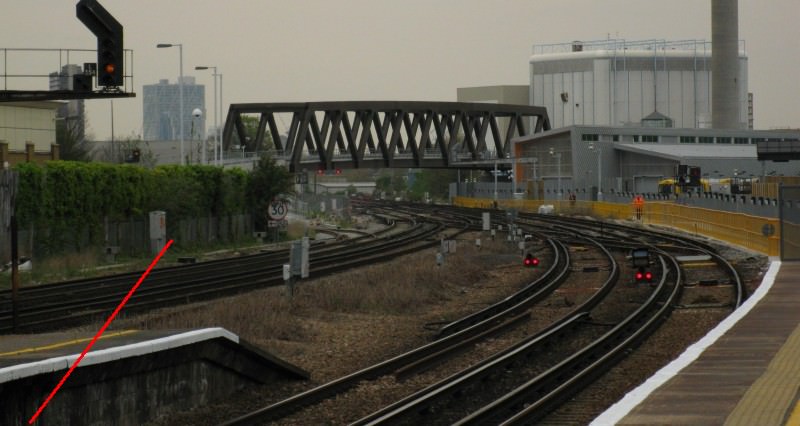 View from the London end of the New Cross Gate platforms
The ELL flyover can be seen and it appears the ELL’s line touches briefly the former alignment of the Croydon Canal. The canal’s approximate alignment is marked red. It ran past the north east corner of the Sainsburys superstore and then diagonally across where the rail tracks and platforms are, before heading south along the ELL’s Croydon bound platform
Travelling to the New Cross stations on London Overground’s East London Line, one passes Canal Junction, which is immediately after the bridge over what was once the Grand Surrey Canal. The line to New Cross branches to the east off at Canal Junction, whilst the route to New Cross Gate and Crystal Palace/West Croydon is the ‘main line.’ A short distance past Canal Junction, the East London line crosses Coldblow Lane and turns to run along the London – Brighton rail route for the short distance to New Cross Gate station. The south end of the ELL depot is near the site of Lock No.1 of the Croydon Canal. Lock No.2 was short of the platforms at New Cross Gate station

The down East London platform at New Cross Gate is roughly on the canal’s alignment, with Lock 3 adjacent to the bridge

A Class 378 at New Cross Gate on first day of services. Compare views with pictures below – what has happened to the stones?
At the country (or Croydon) end of the station the canal passed through the left hand bridge hole. The bridge is thought to reflect the site of the old canal bridge here, and the location of Lock No.3. The canal then veered to the east towards Shardeloes Road. Below left is a close up of the bridgehole. The grey control boxes are about at the former entrance to Lock No.3. Behind them, further to the left in the undergrowth, are stone blocks that are said to be the remains of the lock, or canal bridge, or whatever. Now that it has been found that the canal did exist at the same time as the railway the origin of these stone blocks are more obscure than once thought 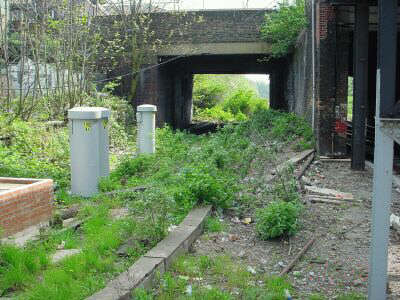 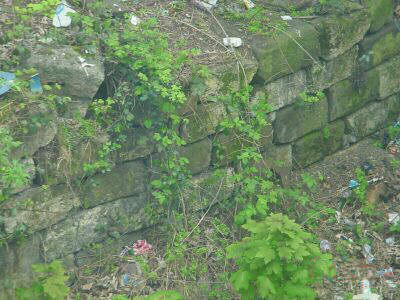 Views of the old stones under the bridge before East London Line reconstruction
These stone blocks (above right) can be seen easily from the footbridge leading to the platforms, and can be studied using a zoom lens. Popular thought is they were part of the canal, but are said to be stone sleepers ordered for the London and Greenwich Railway, and abandoned when that railway decided upon wooden sleepers. However, they seem quite well arranged – close inspection reveal that some have had mortar between them. But this is not conclusive as to whether they are part of a canal wall, part of the old canal bridge here, or old stone sleepers abandoned – they may have even been something to do with the atmospheric railway that replaced the canal to Croydon. One or two of the stone blocks have drilled holes, which may have been for holding rail lines, or for supporting handrails, but the true identity of the New Cross stones remain a mystery. A look at the narrows on the Regents Canal at Little Venice, forming the bridgehole under Warwick Avenue bridge, reveals a similar arrangment of stones (this particular section of the Regents was begun in 1812) It is quite possible therefore, that the stones at New Cross are the entrance to the bridge hole that immediately preceeded lock no.4. As someone has pointed out, there is evidence that the London & Greenwich railway tried to get rid of a lot of stones and it may well be that some of these stones ended up here and at Warwick Avenue bridge! The railway bridge hole appears to be approximately where the canal passed under the road at this location. We now move on and look at the route of the canal as it passed from New Cross to Barriedale