In the begining plans for the canal anticipated a connection with the Thames, thus it was known officially as the Croydon and Rotherhithe Canal. The Grand Surrey Canal Company were the ones who made the river connection and the Croydon company had to settle for a junction near Coldblow Lane, in the vicinity of New Cross. The un-named location for want of description and consistency with the Grand Surrey feature was entitled Coldblow Junction by London Canals. It is sometimes referred to as the junction near Hatcham.

Upon seeing this old picture, it did not seem possible this was Coldblow.A survey of the area confirmed that this picture depicts the former junction with the Croydon Canal. One puzzle is the railway at the back of the photograph. This seems to dive under the canal.. In fact it went through a short tunnel under the London and Brighton line at a lower level than the canal itself. This tunnel is shown below, and served a branch to Deptford Wharf (opened 1849 closed 1964.) 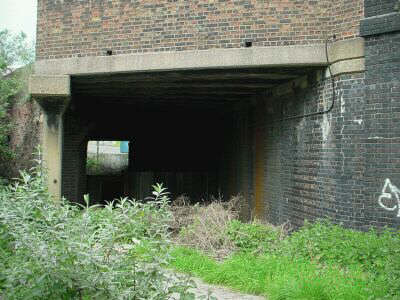 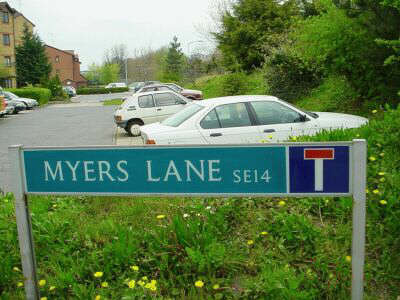 It is a bit difficult to keep track here, but bear in mind that the first pictures looked southwards along the canal route. This is Myers Lane, picture above left, which is part way along Mercury Way, and this is the view looking back towards the junction along the canal alignment. Mercury Way is out of sight behind trees on the right.The next picture (above right) is the approximate extent of the Coldblow Cut as seen in the black and white view. The location is identifable because almost directly behind is the entrance to the railway tunnel discussed earlier, and the railway followed the alignment where the cyclist can be seen, as it crossed the picture to enter the tunnel. 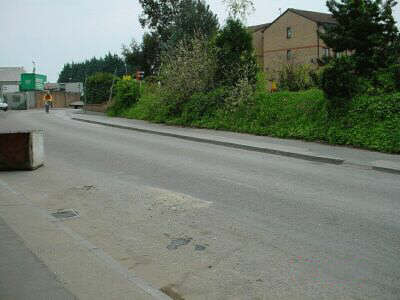 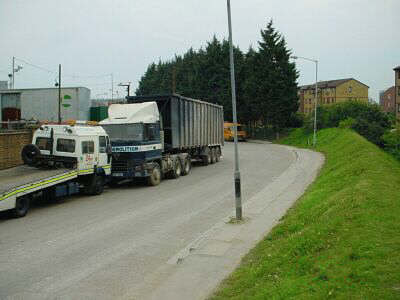 Mercury Way – one of the dustiest roads in London?

In dry weather Mercury Way must be one of the filthiest roads in London due to the number of lorries. These pictures, with lorries parked, show where it makes a ‘s’ bend into the canal’s alignment. Mercury Way now uses the canal line as far as Coldblow Lane. 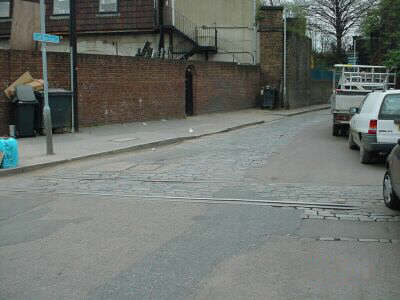 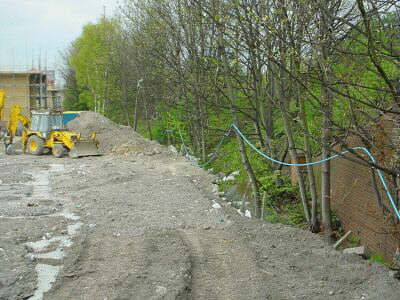 Scenes at Coldblow Lane, near to the site of the canal’s first lock.

As seen above, the canal ran where these redundant railway lines can be seen in Coldblow Lane. Mercury Way is behind the photographer and to the right the canal enters the site of the former New Cross carriage yards, now a housing estate. Coldblow Lane is a long underpass through the railway embankment. In the next image (right), the line of trees follow the canal’s course, and the railway is on an embankment to the right of the trees. This vacant industrial land is now a housing estate adjacent to the railway. The canal ran to the right of the trees, its course now obliterated by the railway. Lock No. 1 was thought to be about here, but as Greenwoods 1830 map shows, there is an odd twist in the canal. Other maps do not suggest this odd ‘twist’ so lock No.1 was probably a bit further east – where the East London line curves to the London and Brighton route – see: New Cross Gate