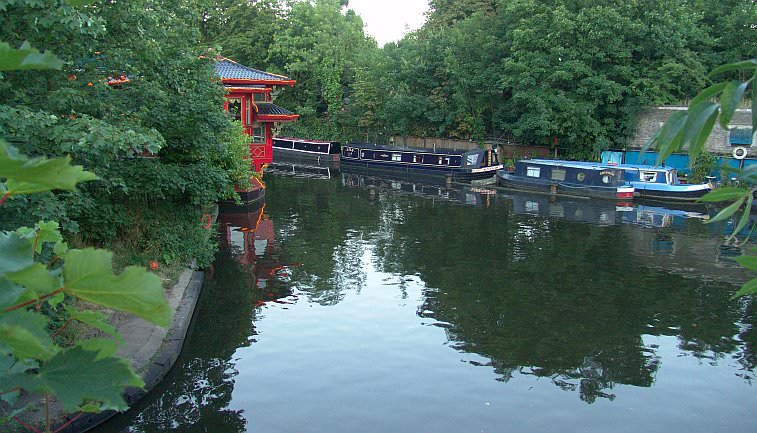 View of the entrance to the Cumberland Arm, with the chinese restaurant visible at left
The Cumberland Arm served the market area and military facilities to the north of the Euston Road in Central London, and was about a half mile in length. It was built at the same time as the rest of the Regents Canal and opened in 1816. The arm saw heavy active service during the wars and military conflicts. Alas it was the last world war that put an end to the use of the arm as a link to the rest of the British canal system. Nowadays there is very little to see of the Cumberland Arm. The most prominent features at the junction of the two canals here, which is known as Waters Meeting, are the stump end of the arm, known as Cumberland Basin and where the Feng Shang Chinese restaurant is located. This oversized floating barge is somewhat a misfit in the Regent Canal’s character. Its canal-less style and patently oversized upper structure would tip over if it were not for the addition of support struts to stabalise the whole thing. Next to it are the Cumbeland Basin Moorings, which were at one time owned by Turners Marinas and the abortive location where the controversial British Waterways’ ‘Arklight’ scheme was to be based. Although not exactly the junction itself, this interesting image (British National Image Library) shows the canal in the park with St Marks Gate bridge and part of the Cumberland Arm heading away from Waters Meeting Junction. The picture is said to have been taken in 1945 though that is incorrect because diesel tugs were not used on the canal until the late 1950’s! 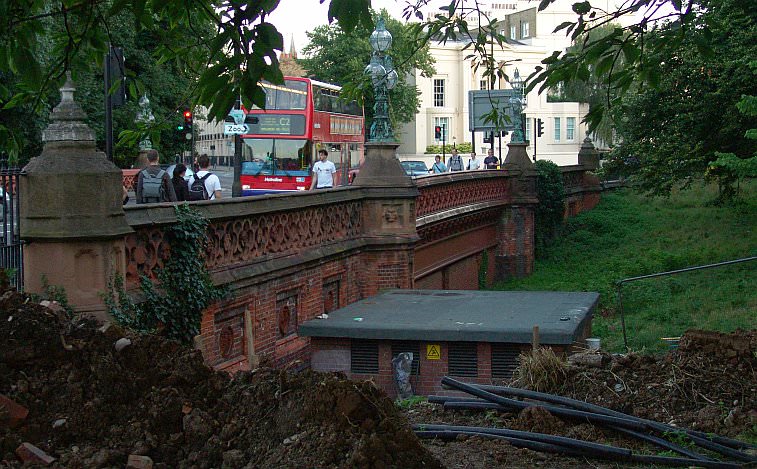 The route of the Cumberland Arm heads south east – its course is now the main car park for the London Zoo
Nothing can be sene here but if one walks to the far end of the car park (or walks along Prince Albert Road to the junction with Gloucester Gate/Albany Street) the splendid Gloucester Gate bridge can be seen. Now somewhat oddly sited in its setting, its existence is only explained by the fact that it once crossed a canal! The bridge was the second structure at this point, replacing an older brick bridge and opened in August 1878. Because of its location (in Regents Park and adjacent to the exclusive Park Village East and West estates built by Nash, the bridge was a grand affair with lots of decoration and low-relief sculptures, much of which has now has considerable erosion 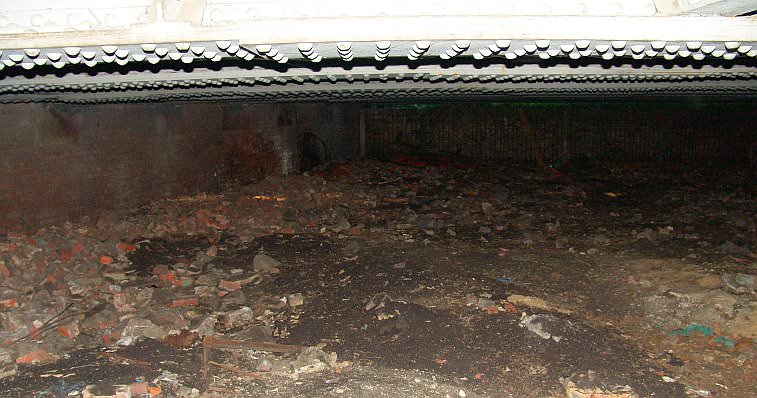 It is possible to see underneath the bridge through a small gap in hoarding. Its a very disappointing sight though! 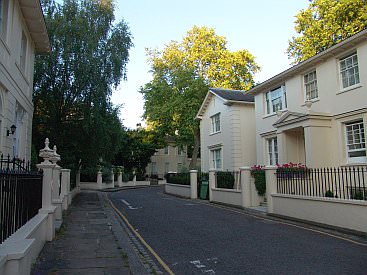 Park Village West is the more elaborate of the two Nash built estates on either side of the Cumberland Arm
The canal actually formed the central focus of these two exclusive estates, so its a surprise that this essential element of Nash’s has been removed. As there’s absolutely no trace of the canal south of Gloucester Gate bridge, the existence of these estates and other buildings indicate the former canal route. Nash houses were a common view along the Regents Canal’s summit level, and the grand master had designed and built another elaborate canalside estate at Lisson Grove to complement his Park Village scheme. However these, known as North Bank and South Bank, have long since gone 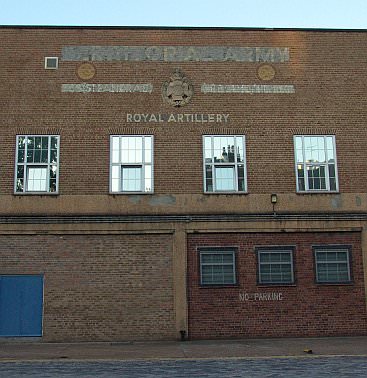 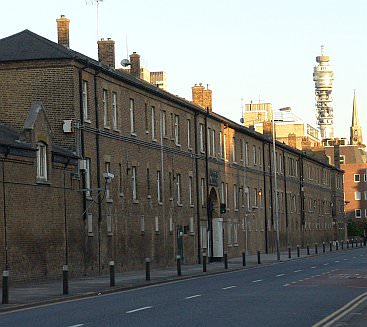 The military buildings, known commonly as Regents Park Barracks, were served by the Cumberland Arm
There was once a regular barge traffic supplying military hardware between Woolwich Arsenal and the Barracks. These two pictures show part of the main barracks (now partially disused) along Albany Street with the British Telecom Tower visible. The canal wharf was at the rear of the barracks and although there is nothing to be seen, at least the course of the canal can be seen as it heads into Cumberland Market basin 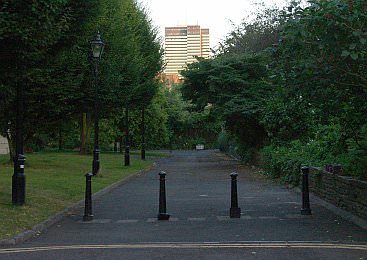 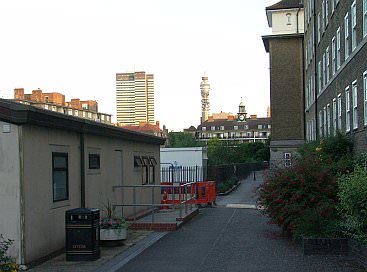 Views approaching the canal’s Cumberland Market terminus
The left picture shows a footway behind the barracks – this can be accessed through the estate off Albany Street or via a passageway by the junction of Park Village East and Augustus Street. The canal along here and into the basin. The Euston Tower can be seen above the trees and this is prominent in the next couple of views as well. The right hand picture shows the pathway as it enters the former Cumberland Market basin area. The Telecom Tower is also visible 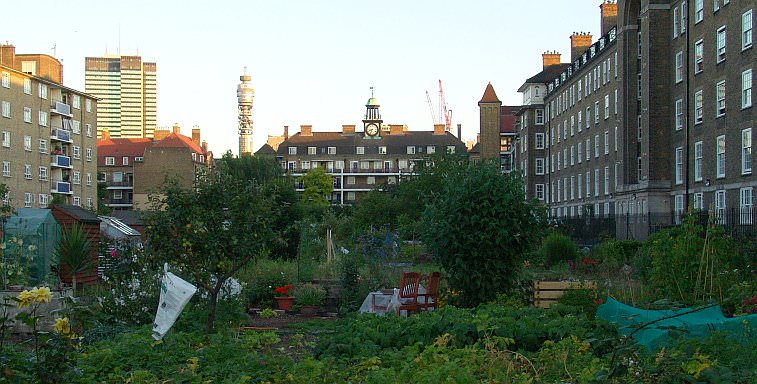 A view looking down the middle of the allotments at Cumberland Market
This would have been the middle of the basin at one time! A huge basin indeed, nearly as big as Battlebridge basin near Kings Cross! Cumberland basin was filled in just after 1945. Locals say that several derelict barges were buried here. Discovery of the skeleton of one of the barges was made by one of the allotment holders a few years ago. Rubble from local wartime damaged buildings was used to fill the basin, whilst the top soil was apparently surplus to the Royal Family’s needs and brought over from Windsor Castle to be used as landfill here. The flats on the south and west sides of the basin were built long before the canal was closed, so most of the buildings here exist from canal days
For a description of the orginal market designed by John Nash, see British History Online