King Canute – and the earliest London canal that never was?

The story of Canute’s Canal that was supposedly built to by pass London Bridge in order to attack the City of London in 1016 is perhaps a myth and nothing more. There is much speculation about what form Canute’s Canal took. Some arguments suggest that the land south of the Thames was low enough for ships to cross on very high tides, where others assume that existing ditches were used and deepened. 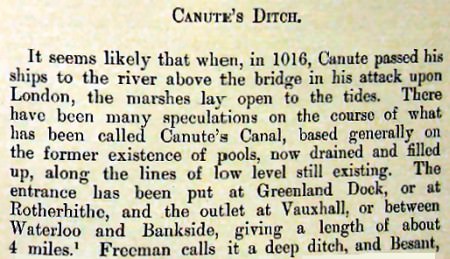 ‘Canute’s ditch’ and the route it is envisaged to have taken
What ever the format was it certainly seems that Canute sent his ships across the land to the other side of the bridge. However the idea of his building a canal of perhaps four miles in length is somewhat incredulous especially when it couldn’t have been done without the English peoples knowing. London Online suggests that “the statement that he dug a canal from Rotherhithe (then known as Retherith) to Battersea, as some writers would have us believe, and so diverted the course of the river, must be an exaggeration.”

An early image of London Bridge. This is the stone version built in the 12th Century, some 160 years after King Canute’s attempt

William Maitland and his research

Despite the apparent exaggeration, there is some minor evidence that a cut of sorts was built. Interviews conducted by William Maitland, a historian and biographer, tells us of discoveries of a man made channel. Detailed observations told to Maitland in the year 1729, by a John Webster who had been a carpenter on the construction of the Great Wet Dock in 1694, indicated at clues that were found when the dock was being built. The particular construction of an old channel led Mailtland to conclude that it was European in orgin. On the basis of Webster’s observations Mailtland therefore decreed that the dock was the start of Canute’s work. These revelations were made in various publications and one (without the interviews) is related in Chronicles of London Bridge (pub 1825) which is downloadable from the internet. 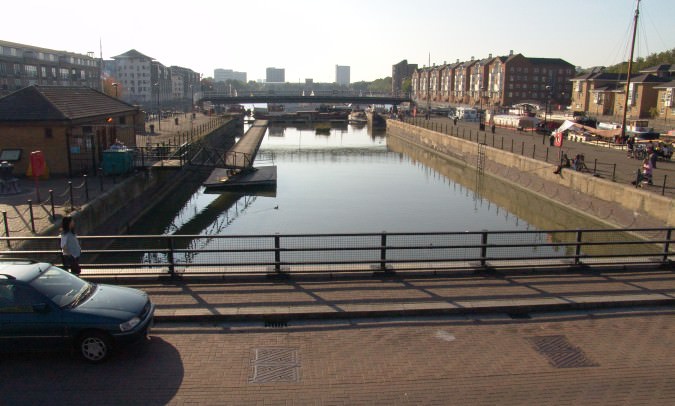 The former entrance lock to Greenland Dock. The possible site of the start of Canute’s canal in 1016? Or the location where he made a breach in the river banks?
It is agreed that Canute began his invasion of London by sending ships westwards from what is now Rotherhithe (most likely by a high tide round the south of the Thames and sailing across area that is now the Elephant & Castle.) Canute’s fleet entered the Thames further up at either Vauxhall or Bankside. The definitive article on Canute’s invasion and his digging of a waterway is from an old publication known as the Anglo-Saxon Chronicle. This tells us the event happened on May 7th 1016 and it tells us of a ditch being dug to allow the ships to by-pass London Bridge. Whilst it doesn’t tell us what sort of ditch was made, the most likely explanation in terms of time and effort is a simple trench breached through the Thames southern bank at Rotherhithe in order to flood the land and permit the ships to sail westwards on the high tides. 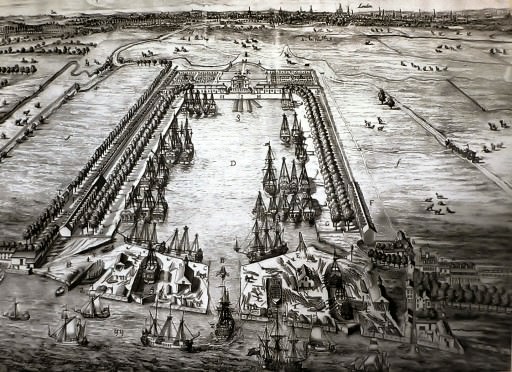 The Great Wet Dock in 1717 (See Notes 1 and 5 below)
British History Online tells us that the canal (‘Canute’s Trench’) ran from the Great Wet Dock through Newington to Chelsea Reach. The same source also tells us that Canute dug a trench not only on the south side, but also on the north and western sides thus surrouding the city completely (see this page.) This information isn’t related elsewhere so one wonders what to make of it. If its true then Canute had built something approaching a mini M25 style waterway around the city! Again the question is how could this have been achieved right under the noses of the city’s residents and defenders?

Maitalnd’s course of the alleged canal

In conclusion Maitland indicated the definitive course of Canute’s Canal in one of his books. Whether he was right no-one knows. Maitland claims it took him a considerable amount of time to work out the course. In plotting Maitland’s course onto modern day London I find that the alleged canal ran from the Great Wet Dock due westwards across Southwark Park, before bisecting Galleywall Road. It then ran parallel along the Old Kent Road from about where the Tesco superstore is, before crossing that road’s alignment somewhere around Bricklayers Arms flyover. It then heads towards Newington Butts, then onto an alignment roughly where the current Upper and Lower Kennington lanes are, before running through the location of Vauxhall station and into the Thames at the lower end of Chelsea Reach.
Whether Maitland’s findings had any real substance to them no-one knows. Exciting as it may be to have a possible precessdor to the Grand Surrey Canal, the liklehood of any such waterway having existed seems too much to bear when one assesses the scant evidence for a canal alleged to have been built in the 11th Century. On the other hand it does appear that Maitland actually found the course of a largely unrecorded waterway called the ‘Colechurch Canal.’ This will be described next. 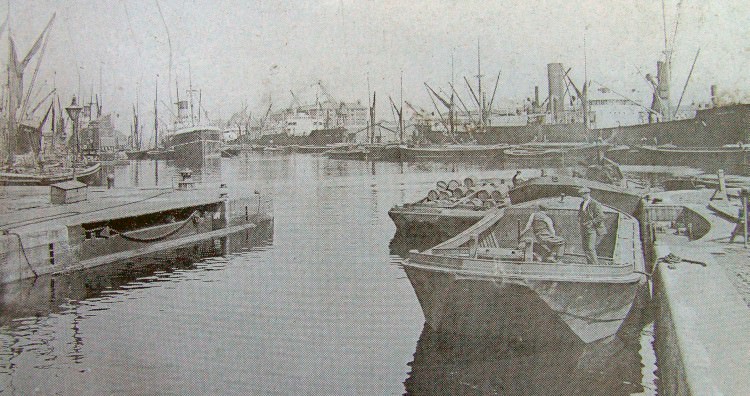 Old view of Greenland Dock, a busy shipping location for 276 years. Commercial shipping ended in 1970. Canute’s fleet may have sailed the marshes at this location in 1016

Further research by London Canals reveals that a canal was most likely built from Rotherhithe to Battersea, but it was NOT Canute’s work. Findings suggest Canute simply breached the banks of the Thames either side of London Bridge, an easy task to do as the land to the south is lower than the Thames in several places. The aforementioned new canal is said to have been built in about 1176, in order to enable vessels to by-pass London Bridge during the construction of the stone structure. This was clearly a very substantial work of construction, and it is belileved that this canal served as both a diversion for a substantial amount of the Thames flow and its shipping. Its builder clearly needed access to the base of the river in order to construct solid foundations for the new stone bridge. Such large works would have been greatly advanced for the time. The un-named diversionary canal ran from Rotherhith to Patricksey (Battersea) and its course is quite in line with Maitland’s findings. The work of building the new bridge was finished in 1209. It appears that this canal may have been in use for at least 33, or more, years.
The un-named canal was used ‘for the time’ in other words it was just temporary and no detail is given of how long it was used for. The work was approved by Henry II and funds were contributed by in part by the king and part by the Archbishop of Canterbury. It becomes quite clear that what Maitland has found is not the work of Canute but the temporary diversion of the Thames along this substantial cut – in view of its having no name, it should clearly be described as Colechurch’s, or the Colechurch, Canal.
Its instigator, Peter of Cole-Church, became Warden of the Brethren of the Bridge (or supervisor) in 1163. It meant he had a large responsibility for the safety and upkeep of London Bridge. No doubt he had the authority to build a canal of such proportions. Peter of Cole-Church was also the priest & chaplain to St. Mary’s of Colechurch. This building was sited in Poultry, City of London, and was one of 86 churches destroyed by the Great Fire of London.

1) The Great Wet Dock was also known as the Howland Wet Dock and it was sited at what is now Greenland Dock [see the feature on the Grand Surrey Canal and also Wikipedia];
2) William Maitland [c1693-1757] wrote a considerable amount of material on London and one of his most notable works was The History and Survey of London from its Foundation to the Present Time Pub 1753-6;
3) Historians have pointed out that in olden days the land south of the Thames was much lower and as recently as 1850, spring tides still could reach parts of the Old Kent Road, giving an average of 5ft of water over the land. The conclusion is that it must have been easy for these tides to reach Blackfriars or further up. Cutting channels through the banks of the Thames would have allowed a greater volume of water through;
4) The Grand Surrey Canal passed through the same area of London and was at a level far lower than high water tide on the Thames, thus strongly illustrating the low-lying nature of the land south of the Thames;
5) The image of the Howland Wet Dock in 1717 came from Wikipedia. Wikipedia tells us that this is a copyright free image in the public domain. Other websites including several in the UK use this image and there is no mention of any copyright being attatched to it. It is featured on their page here