From Hertfordshire.com
“The River Lee (or Lea) runs through Hertford on its way to London and it is joined in Hertford by three other rivers, the River Mimram, the River Beane and the River Rib. A canal called the Lee Navigation runs south from Hertford and barges can be hired for pleasure use. There are many good walks along the rivers and canals in and around Hertford.”
From RiverLee.Org
“The Lee Navigation is a canal. Many buildings and structures were built by the side of canals to help with navigation.”
These sites (and others) recognise that the Lee Navigation is a canal, its not even a canalised river as some suggest. That attribute might have been applicable in the past when the Lee Navigation was incomplete and still relied on susbtantial lengths of river for navigation. One could probably argue that the Lee Navigation has been ‘re-canalised’ meaning it has migrated from being a canalised river to being virutally nothing more than a canal. The information about the River Lea and Lee Navigation is much mis-managed, or perhaps confusingly handled, giving many people the romantic notion that they can boat along the River Lea/Lee from London to Hertfordshire. It is simply not the case. Take the example of BW publicity leaflets as shown next. 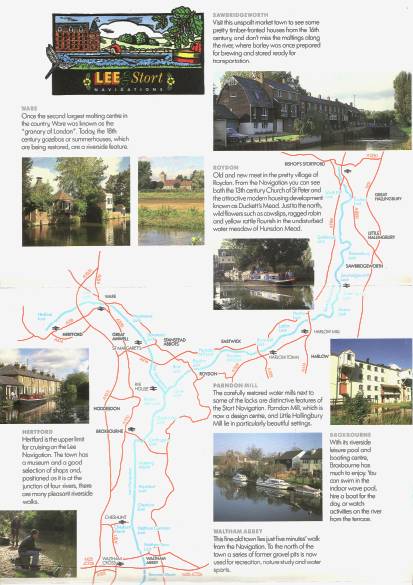 Lee and Stort Navigations leaflet
15 years ago BW called it the Lee Navigation and told us that “Hertford is the upper limit for cruising on the Lee Navigation.” (Lee & Stort Navigations; pub 1989) – Recently they were calling it the River Lee (The Rivers Lee & Stort; pub 2004) telling us that for example “Hertford is the upper limit of the River Lee” (that confuses it even more because it implies the source of the river is at Hertford) Since their move to Sheldon Square their new leaflets call it the River Lee Navigation (Walking in Broxbourne/The Lee Valley; pub 2005) Its perhaps a little better but still confusing! I prefer the original publicity from 1989 because at least it was concise and did a good job of publicising the potential attractiveness of the Lee Navigation.

The Rivers Lee and Stort leaflet
As a good example of this confusion here’s this news item about a police helicopter chasing a narrowboat on the Lee Navigation. It is clear they think the Lee Navigation is the river (and the poor old River Lea doesnt even get a look in no one thinks it exists!)
The correct spelling also is another problem for debate. Generally its the Lea for the entire 50 miles of river throughout from Leagrave near Luton to Leamouth. Above Hertford its always the Lea. Below Hertford its mostly the River Lea, and sometimes the River Lee. The Lee Navigation is the most oft used name, but sometimes its called the Lea Navigation. The name Lee Navigation was established by an act of Parliament and in this respect it is this description that MUST be used when describing the bits that the boats use.
The Lee Navigation is 28 and a half miles long from Limehouse to Hertford. The lengths of apparent river used make eight and a half miles total, whilst 20 of this is by the Lee Navigation’s canal. Even this river mileage total of eight and half miles is probably inaccurate for it has been estimated that only three and half miles of original River Lea is actually used! A compare with the Wey Navigation reveals that this much shorter Surrey waterway has much more navigable river and off river cuts
The sections of Lee Navigation canal that takes a substantial flow of water from the Lea is the short bit in Hertford and between Dobbs Weir to Old Nazeing Bridge in Broxbourne
Locks: There are 20 of these on the Lee Navigation. Most of the lower locks are mechanised and can be operated by boaters with a BW key. These locks are; Old Ford, Tottenham, Stonebridge, Ponders End, Enfield (partial) and Rammey Marsh (partial.) When the power locks are not working at some locations there are alternative manual locks. Stonebridge west lock (the manual one) is a bugger to operate but works. Ponders End east manual lock is easy to use. Tottenham west manual lock has been known to be made to work and at Old Ford west absolutely not a chance in hell of using the manual lock!
Lock Dimensions are: Limehouse/Bow to Ponders End; 95ft x 19ft 6ins
Enfield to Hertford; 84ft x 16ft
Sanitary Stations, water and rubbish points can be found at Limehouse, Old Ford, Springfield Marina, Stonebridge, Hazlemere Marina, Fielde’s Weir, Stanstead Marina (small fee payable) Hertford
The best moorings are at: Springfield Park. Stonebridge Lock. Above or below Waltham Town lock. Cheshunt. Dobbs Weir. Stanstead Abbotts. Ware. Hertford.
Other places with visitor moorings (Broxbourne and Enfield etc) are ok for a visit to the shops or pubs.
Ware or Hertford are best for shopping. A walk up the hill from Springfield enables one to reach the major shops at Stamford Hill.
There is a huge Tesco’s superstore right by the Lee/River Lea at Three Mills.
Good superstores (including a Lidl) can be found just up the road from Tottenham Lock, there are moorings above the lock, though it is best to moor at Stonebridge and walk back if a longer stay is desired.
A stop at Stonebridge gives access to the massive Ikea and Tesco stores that are about 20 minutes walk away (or take bus 192 from the main road next to Stonebrigde Lock).
Springfield is the best place if one wants to moor and walk across the marshes to Walthamstow market, it’s said to be the longest market in Europe.