The River Lea conitnues to be used by the Lee Navigation as far as Stanstead Lock, after which it returns to its own artificial cut, straight ahead and no bends of course. The locks at Stanstead and Hardmead must be treated with care as they only have gate paddles and can easily throw boats about if the paddles are opened too quickly. It is best to open them slowly until at least the flow from the paddles is well submerged before raising the paddles any further. Stanstead has a further complication in that there is a swing bridge right across the lock chamber. This has to be moved out of the way. Smaller boats can use the lock without having to open the bridge but they must take real care to ensure that the strong flow of water from the paddles dont push the boat back into or under the swing bridge. 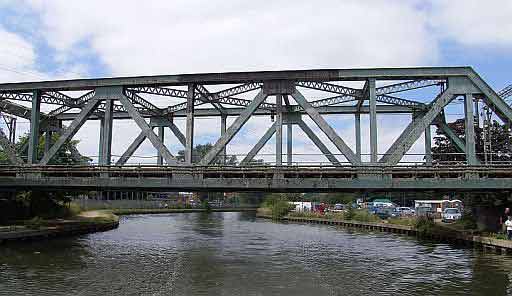 Rye House railway bridge – look out for the Stansted Express! 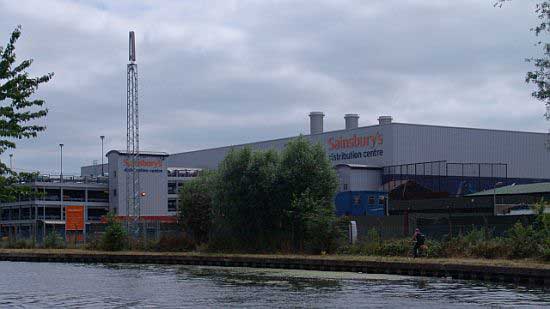 Cruisers and fishermen at Rye House by the motor racing stadium

The Rye House pub and bridge. Out of sight to the left is Rye House heritge and wildlife area, and its interesting gatehouse. Hoddeson Power station can be seen on the right 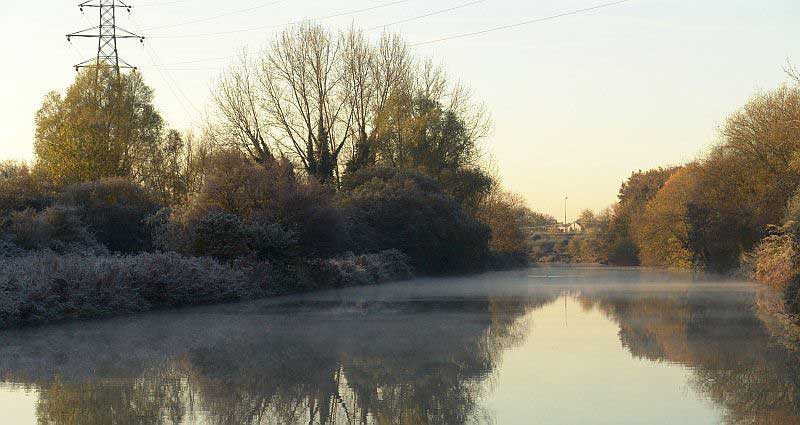 Deep frost and morning mist on the River Lea between Rye House and Stanstead on a mid-winter boating trip. The river widens out considerably along here 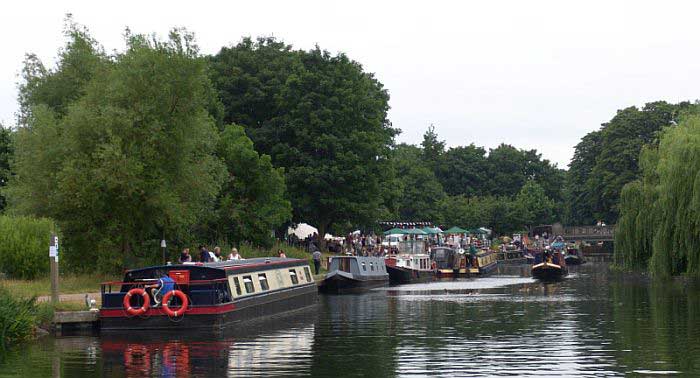 Boats on the River Lea during the Stanstead Festival. This annual village festival sees a lot of visiting boaters who come to listen to the live music. The river along this stretch has actually been straightened, in fact canalised. It used to make a loop round to the south and then another to the north, all traces of the original river course have been obliterated. 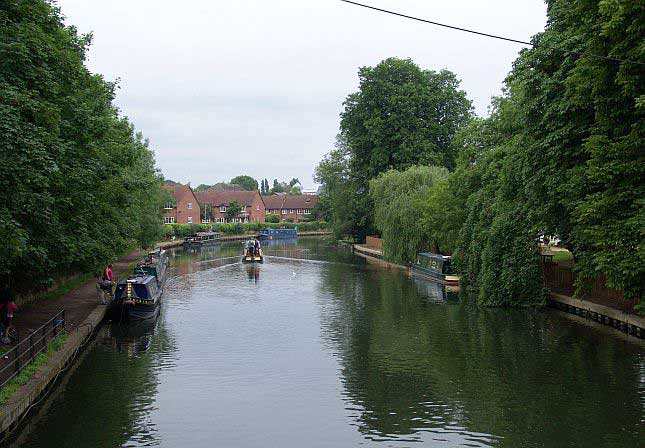 The stretch of River Lea between Stanstead bridge and the lock. Its a quiet spot for mooring if one doesnt wish to stop on the popular pub moorings. Just around the corner is the end of this delightful stretch of the River Lea for navigation and river separate once again until Ware. Look nearby for the post marker which identifies the Greenwich Meridian as passing through the locale 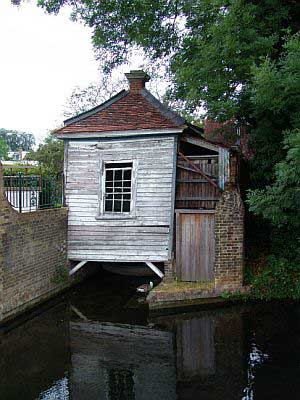 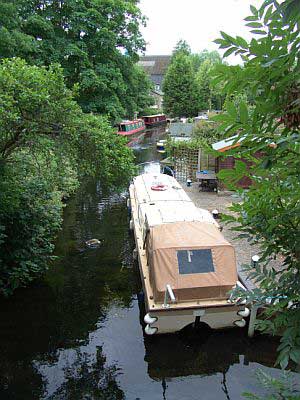 Ware is not the only place that has riverside Gazebos. There were several at Stanstead too and this is one example though its not so well looked after like those at Ware. They are found on a private backwater which can be explored on foot. This private water leads to the mill and former maltings which can be accessed off the high street a little distance northwards from Stanstead bridge. The picture on the right shows cruisers and narrow boats moored on this delightful backwater. 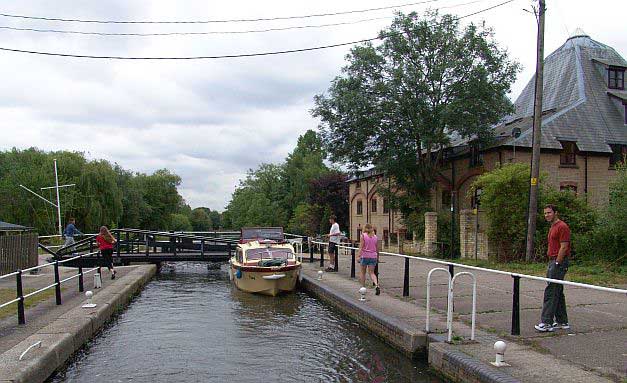 Stanstead Lock. It quite deep and has the reputation of being the most turbulent lock in the country. Certainly the water gushing from its gate paddles is very violent, and even having baffles to mitigate the flow only helps somewhat. Its best to take your time, watch your boats and raise the paddles slowly. The swing bridge is behind the cruiser (above) Smaller boats probably wont need to operate the swing bridge but must make sure the eddy from the paddles dont cause problems. The signs on the top gate beams (below) naturally warn boaters to take real care. The Greenwich Meridian passes through Stansted Lock 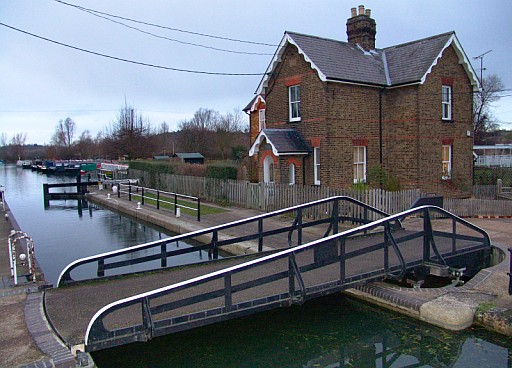 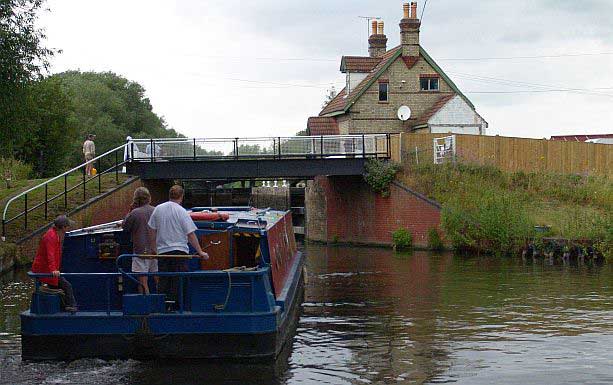 Hardmead Lock. Another turbulent lock. But not quite so tricky as Stanstead as its depth isnt as great. But still best take care and go about using the lock slowly!

A view of the weir and lock at Hardmead. Dont know why but Hardmead has slanted lock gate beams its the only one on the Lee navigation like this

A view westwards from the weir along the waterfront at Ware. The River Lea leaves/joins from the weir on the far right, and both river and navigation share a common course through Ware (except for a short stretch from the visitor moorings by Ware Priory as far as Ware Lock which was dug to by pass the local corn mill.) 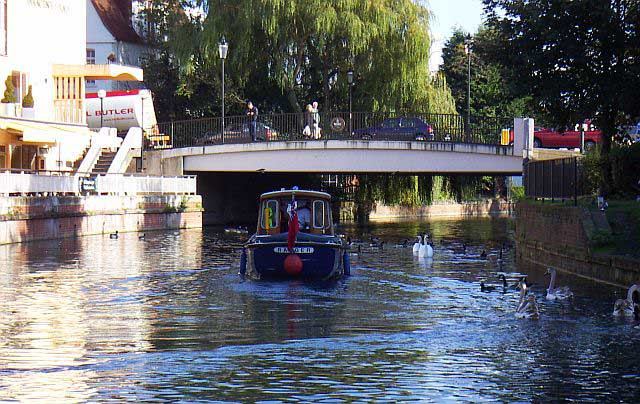 Ware Town Bridge. There are lots of swans and geese here. BW’s inspection launch ‘Ranger’ is on one of its duties 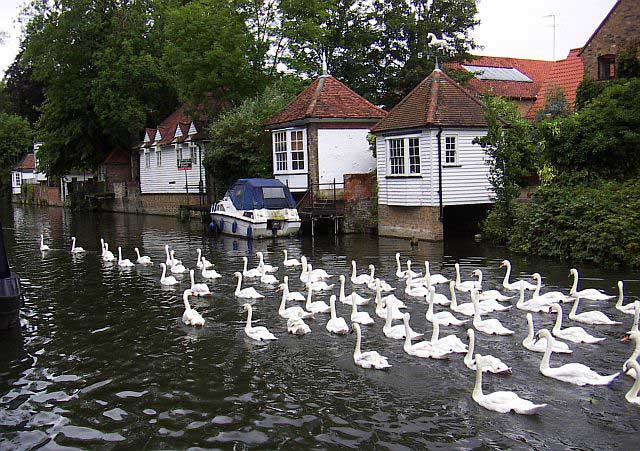 There must be more than a hundred swans in Ware! Here’s a convoy of them heading upstream past the famous gazebos. Notice how they form a V formation, hierachy at its strongest obviously! 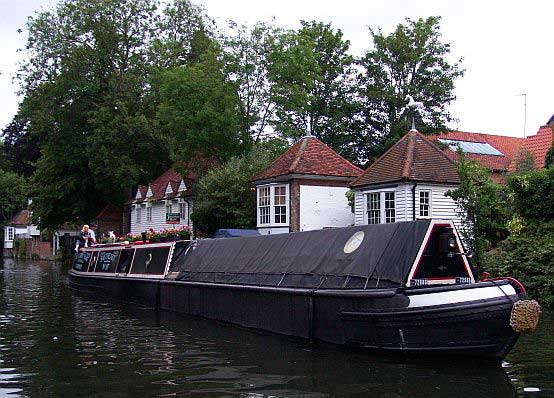 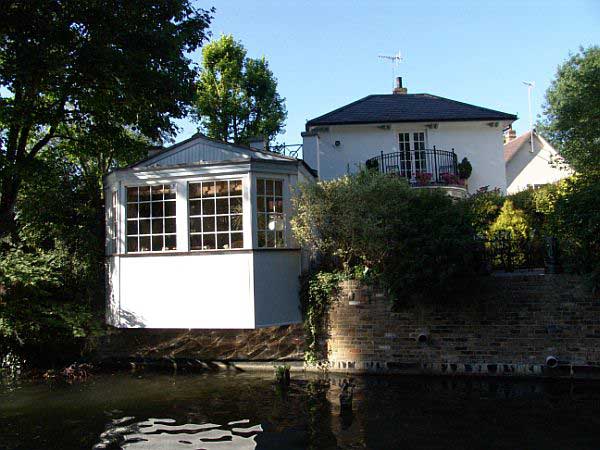 A view of one of the other gazebos at Ware.
The town has good shops and a railway station. T here’s also Scott’s grotto nearby and the New River too. Its quite pleasant to moor overnight opposite the Gazebos. The official visitor moorings in Ware are by car parks or noisy roads. Not many people bother with these.

NEXT: Ware to Hertford Town Bridge