Immediately after Kings Weir is Wormley, a popular mooring spot. There are good walks in all directions from here, from viewing the spectacular cascade at Kings Weir to the vast expanse of Hoyfield Lake and tracing the old Barge River course. Wormley has some shops and pubs on the far side of the level crossing 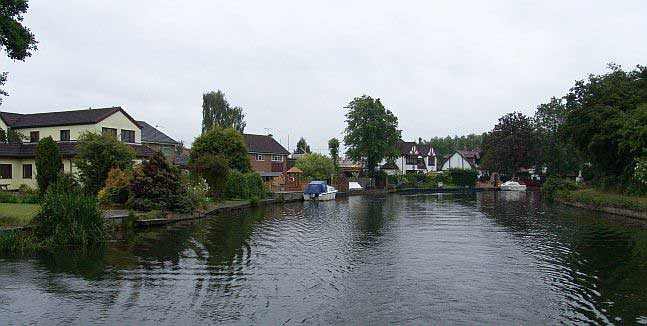 The section through Broxbourne – a bit like the River Bure in Wroxham, Norfolk 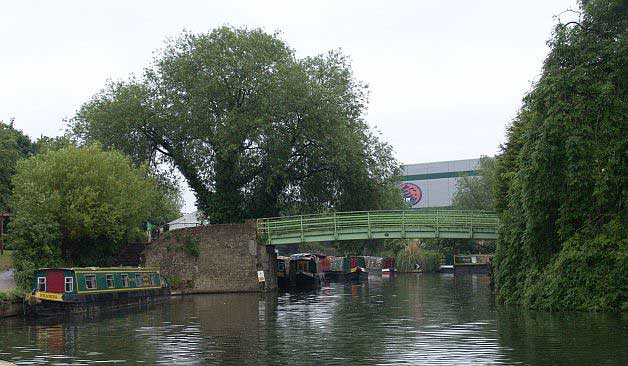 The hire boat base at Broxbourne on the pretty stretch of ‘river.’ Boaters have a nice choice of route northwards to either Hertford or up the very winding, narrow and pretty river to Bishops Stortford. The Lee Navigation takes a sharp turn right after the bridge. This section, despite the appearance of being sort of a river, is in fact a canal, down which the main water flow now goes. This artificial cut extends through Carthagena and Dobbs Weir before rejoining the river by the Fishes and Eels pub. 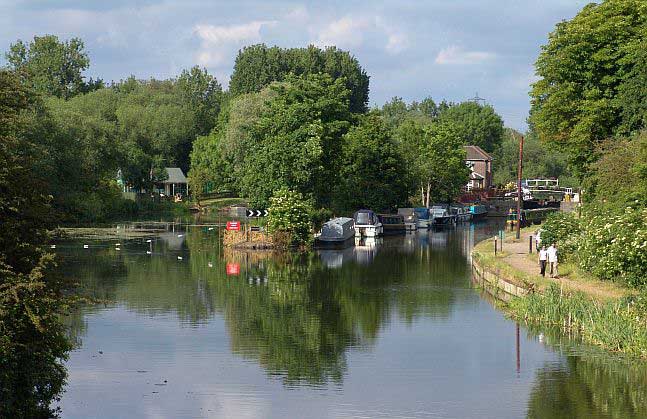 Carthangena Lock approach from Nazeing Road Bridge. The River Lea having actually separated up the weir stream at Broxbourne to heads around the back towards Dobbs Weir. 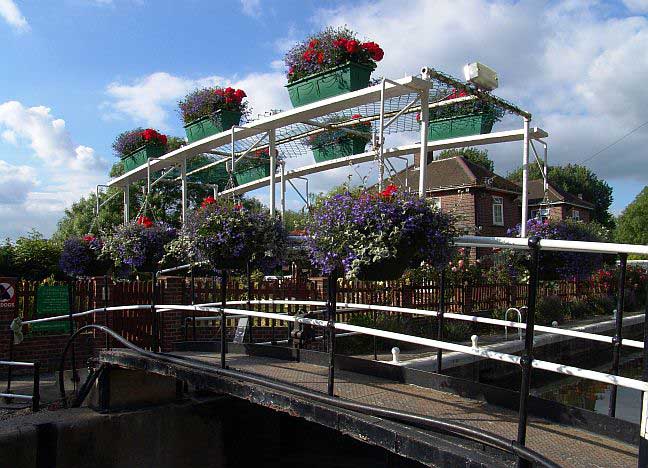 The attractive footbridge at Carthagena lock. Fishing is popular around here and the shop sells fishing equipment. It also sells ice cream and snacks for tourists and walkers. Carthagena Lock lies on the Greenwich Meridian, hence in theory boats have sailed into the Eastern Hemisphere whilst travelling from here to Stansted or the Stort 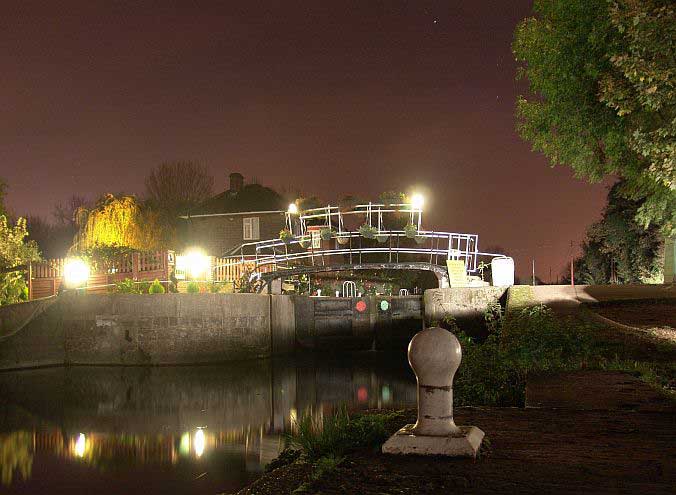 Night view of Carthagena lock
Beyond Carthagena Lock the Lee Navigation’s very river like apperance, and its certainly nice but its not the river though. The Lea actually runs a bit to the west and parallel to the Lee Navigation. Both River Lea and Lee Navigation make a level intersection just below Dobbs Weir lock, though boats are not allowed onto the river. The short cut between Dobbs Weir lock and Dobbs Weir bridge has good moorings. There is a pub and ice creams. Its quite easy to walk from these moorings into Hoddeson for all the big shops and supermarkets (Despite the apparent importance of Broxbourne, its actually Hoddesdon that has all the main facilities – just like a similar conumdrum with Stoke on Trent and Hanley!) 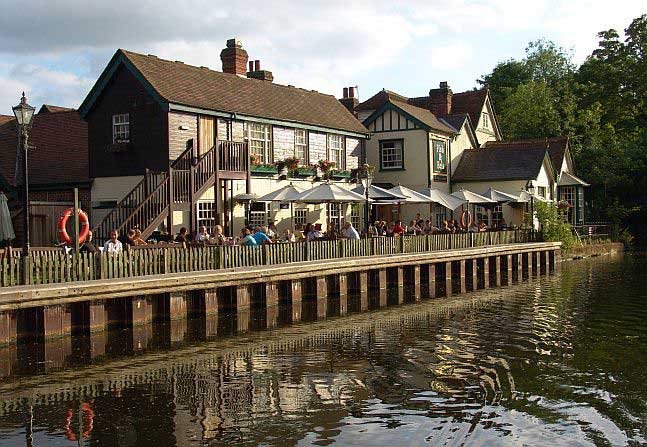 This is the Fish & Eels inn at Dobbs Weir. The Lee Navigation rejoins, and uses, the actual River Lea from Dobbs Weir northwards. Despite the profilration of pylons its a pleasantly winding stretch to cruise. 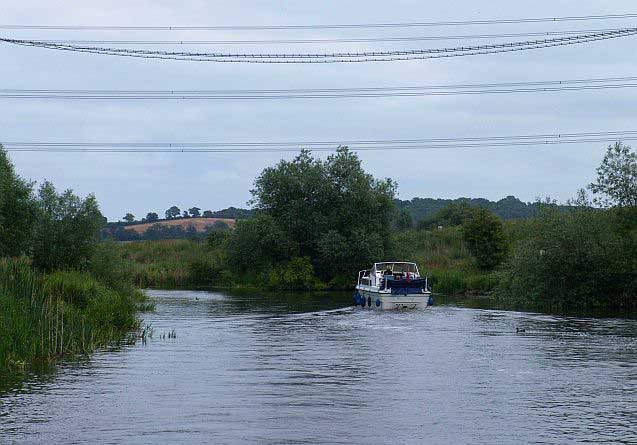 One of the many cruisers on the river above Dobbs Weir 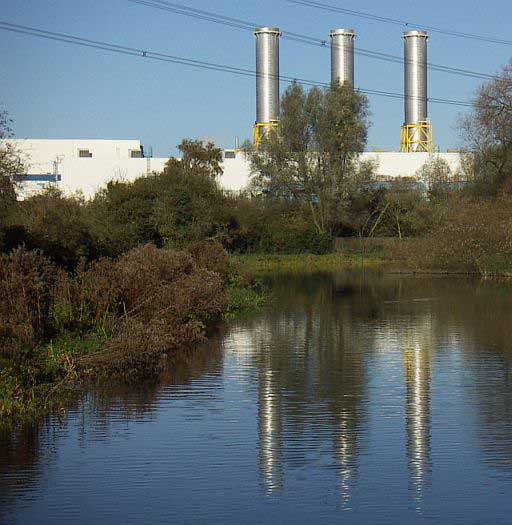 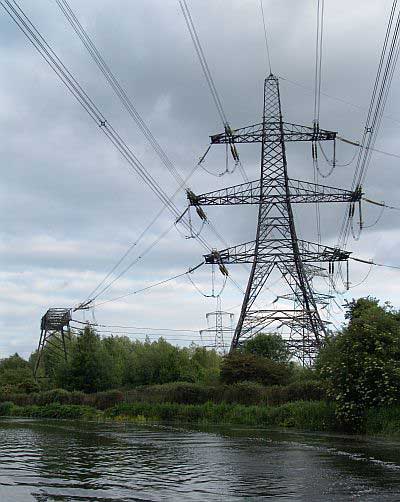 Pylons galore!
When one reaches the stretch by Hoddeson Power Station it is soon obvious that this power station is responsible for the profileration of electricity pylons that maurade much of the Lee Navigation. There are electricity pylons everywhere on this stretch – as if one hadnt seen enough of them. Its a bit like getting to Jupiter and finding those monoliths – as in 2001. Dave Bowman would say “My god its full of pylons!” Without a doubt there are far far fewer pylons to see beyond Fielde’s Weir and the infinte. At least it doesnt take two years to get to this part of the world 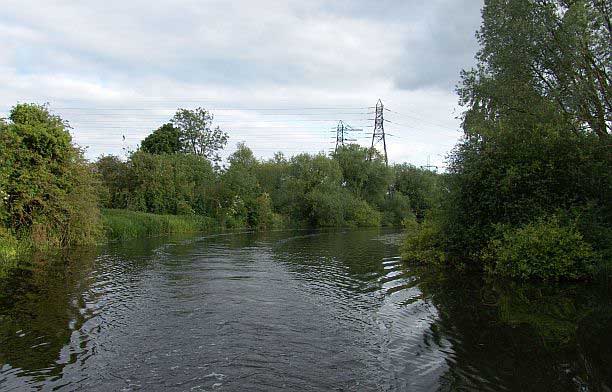 Darn those pylons they’re still about. A view on the river near Fielde’s Weir 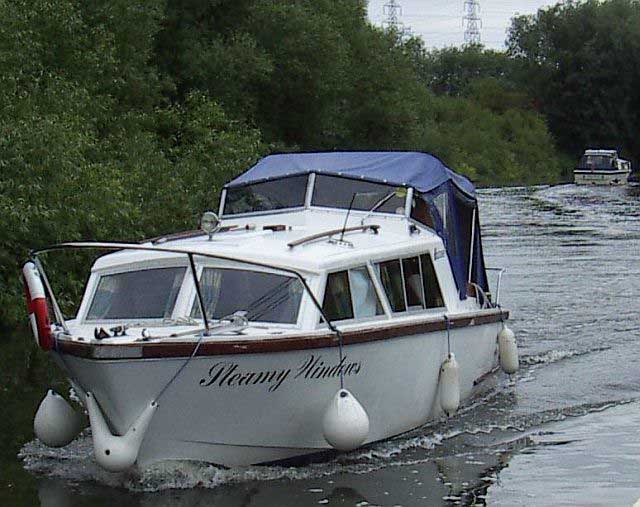 At least the waterway does feel like a real river now – it is a REAL river in fact! There are many cruisers up and down the river especially between Dobbs Weir and Stanstead Abbotts in the main part of the season 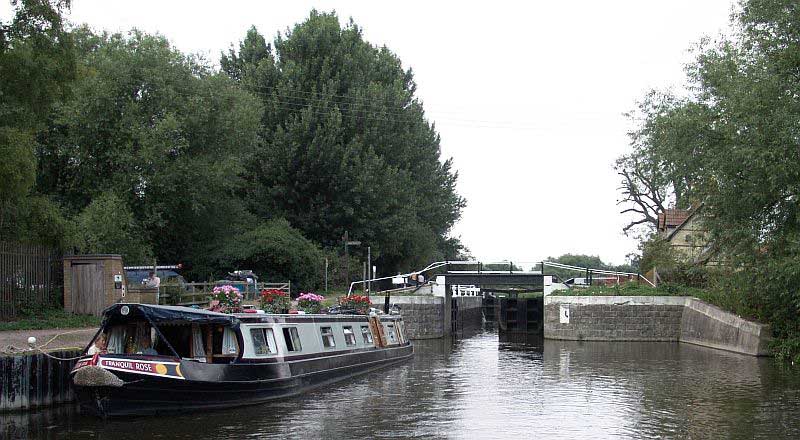 Its nice enough up here! Even the hotel boats do occasionally venture as far as Hertford or Bishops Stortford 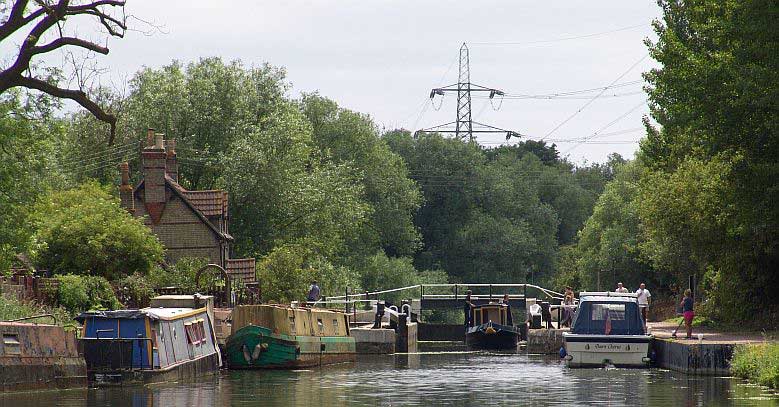 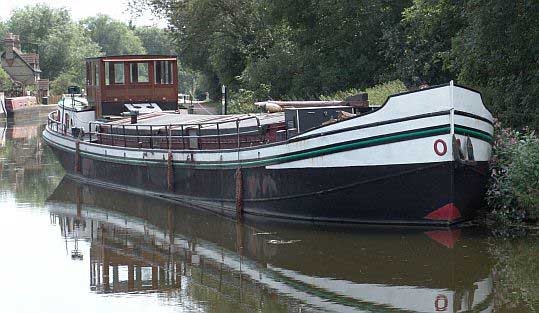 Dont forget some really large craft, like this one that is seen above Fielde’s Weir lock, do use the Lee Navigation! There are several of this particular size, including the Katie Lea.

This is a view of what is commonly known as Fielde’s Weir Junction. The official name for it is Rye House Junction. To the right is the Lee Navigation, straight ahead is the weir over which the River Lea goes, and to the sharp left – along the edge of the weir is the entrance to the River Stort. Boats coming from London and turning into the Stort have to make almost a 240 degree turn!

NEXT: Rye House Junction to Ware