Picketts Lock looking down the navigation towards Edmonton
Picketts Lock is the first of the manual locks on the Lee Navigation – and what a big lock it is! It was improved along with all the others as far as Ponders End to enable barges of up to 130 tons to reach Enfield. Unlike the others, it didnt recieve an upgrade to power operated status, and so it must be manually operated.
Picketts Lock only has gate paddles so its best to ascend the lock very slowly – turn the paddles gently and let the water through the gates bit by bit. Otherwise your boat could get thrown about alarmingly.
This is not the only Lee lock to have these attributes – there’s Hardmead and Stanstead locks too. These three particular Lee Navigation locks can be very violent, so take it slowly!
Probably a useless fact but Picketts Lock is the mid way point between Limehouse and Fielde’s Weir (or Rye House) Junction. Its ten and a half miles in either direction.
From Picketts Lock can be seen some of London’s biggest landmarks. These include the Gherkin, Tower 42 (aka the Nat West Tower) the Shard at London Bridge and others.

The Lee Navigation from a point south of Ponders End footbridge to Enfield is technically the Turkey Brook hence to all purposes and intents it is a river section! This situation exists as far as the brook’s confluence by Enfield’s power station. There was formerly a flood lock at Ponder’s End to prevent the swollen Turkey Brook from indunating the lower canal sections of the Lee Navigation.
The section was originally known as the Enfield Mill Stream. Before 1767 boats used the original River Lea but after 1767 they were diverted onto the new section between Enfield/Ponders End/Stonebridge which utilised the Enfield Mill Stream/Turkey Brook as far as Ponders End. The flood lock below Ponders End was known variously as Bates or Enfield Half Lock. It then became Pallets Lock and finally Ponders End Half Lock. The flood lock was finally removed in 1857. (Old lock names gleaned from from the excellent Lee & Stort history website.) 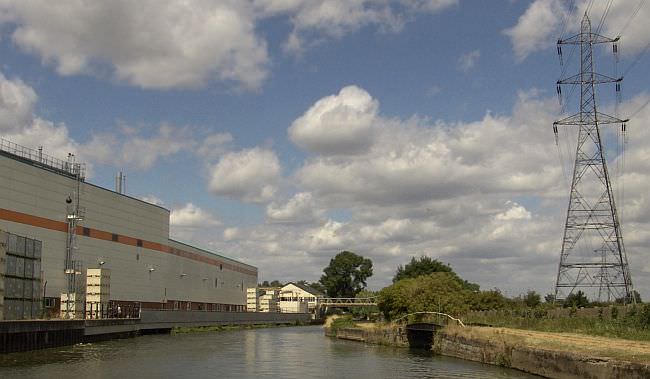 Approaching Ponders End – the small bridge on the right marks the original end of the Turkey Brook section.
The location of the above photograph is taken roughly where Ponders End Flood Lock once stood. The noted Pike and Anchor Inn once stood at this location.
Compare the above photograph with the one below taken in mid 2012. The large works on the left has been demolished. The pylon is the same in both views.

The Ponders End approach in mid 2012 – much less industrialised – and a better view of those notoriously famous flats! 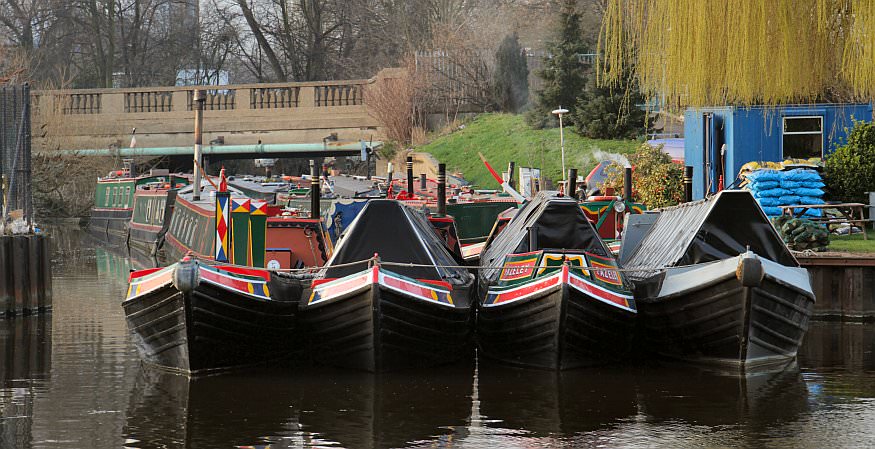 Plenty of narrowboats and working boats moored just below the locks at Ponders End
Behind these narrowboats stands G.R.Wright & Sons Limited’s Ponders End mills. Alas barges no longer serve the premises.
The weirs that managed the overflow from the Turkey Brook:
Beyond the 1850’s a system of overflow weirs was relied upon to manage the flow down the Enfield Mill Stream/Turkey Brook section. This system was rebuilt on several occasions, the final works being when the Lee Conservancy undertook many large scale rebuilds during the 1920’s to the 1950’s. As part of these works at least three very large overflow weirs with huge ‘funnel’ scoops – the highest number of weirs (and the only examples of the type) on any stretch of the Lee Navigation to be built. Overflow channels at Enfield and above/below Ponders End were also built, to carry the flood waters away from the navigation into the River Lea two miles away. These overflow channels still exist but are largely overgrown (see aerial pics below) 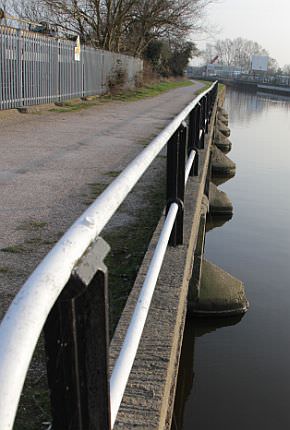 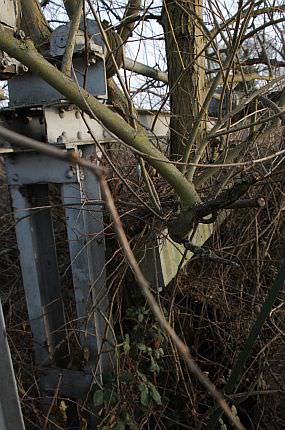 Overflow weir at Ponders End (built 1925) for taking excess from the Navigation and Turkey Brook (see Ponders End 1 aerial below)
The image on right shows the derelict electrically operated sluice gear. Years and years of neglect has seen trees sprout up through the sluices and it’s machinery! When this and its weir were built in 1925, the Turkey Brook was still seen as a problematic issue for the Lee Navigation. Changes in land drainage have now esnured the brook carries far less water than it once did.
In November 2012, after a night of torrential rain, we were able to see the lower weir at Ponders End fully at work – and that whoever it was (BW or CART) had done some clearance work since our last visit a few months earlier. 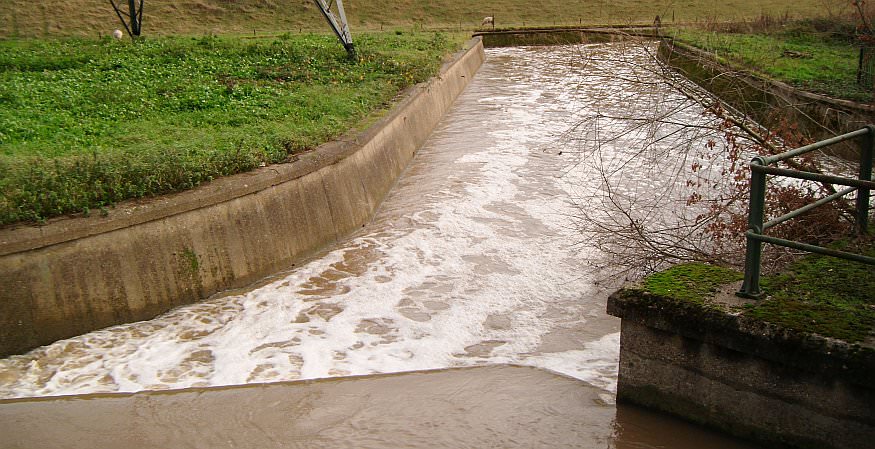 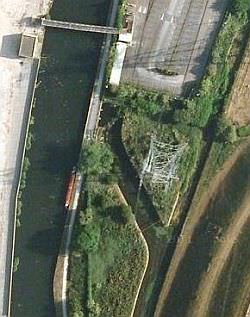 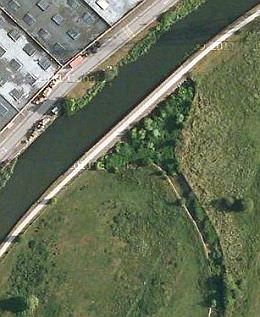 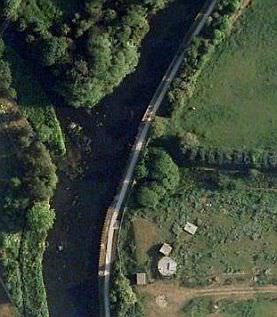 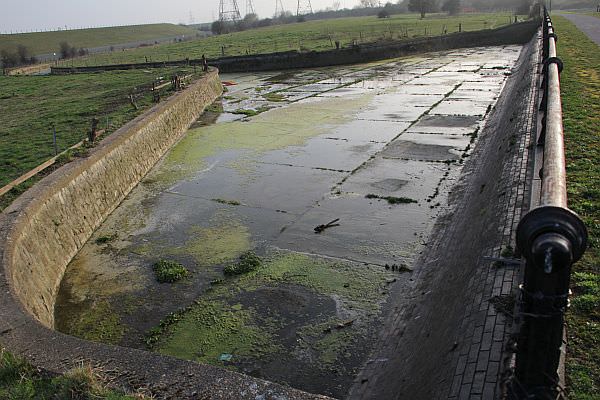 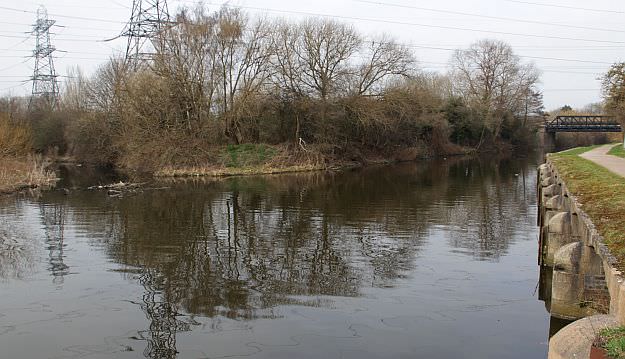 The overflow at Enfield opposite the Turkey Brook (at left.) This led into the channel depicted below.
The aerial shot above entitled Enfield (Lee Nav/Turkey Brook) depicts the arrangement for the weir and overflow channel. 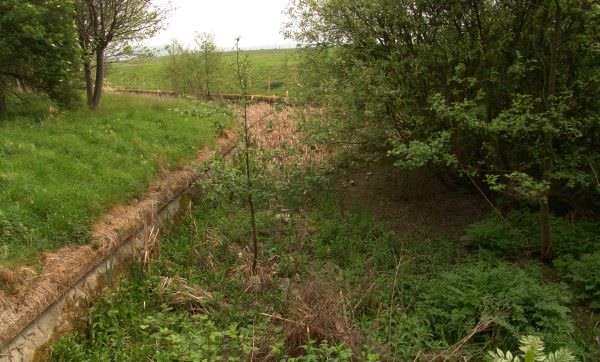 Disused overflow channel at Enfield – built to take excess water from the navigation into the River Lea.
A small towpath bridge at Ponders End marks roughly the point where the original Turkey Brook left the navigation.
Further flood management works after the Second World War was the construction of higher side walls along the navigation as far as Picketts Lock, whilst this lock has deeper gates than would normally be required, in order to manage any severe rise in the navigation’s levels. In addition a fourth weir was built into the towpath itself. (This and Parndon on the Stort are the only examples of cross-towpath weirs on the navigations.)
During the course of 20th Century however, improved drainage (as well as lowered water tables) reduced the Turkey Brook’s flow and made the entire works pretty much redundant.
Nevertheless, in times of heavy rain there may still be an increased flow down the navigation as well as cross-channel currents by the confluence in Enfield. 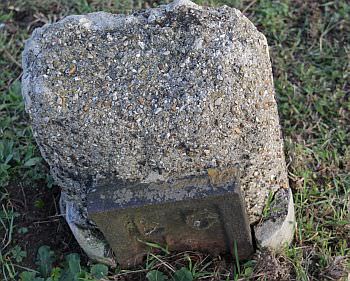 One may spot one of the Lee Navigation’s mileposts in the undergrowth some distance above Ponders End locks. This one marks the half mile to the locks.

Next: Brimsdown to Enfield Lock (including the ‘Turkey Brook navigation’!)