The River Lea continues from Springfield Park past moored boats belonging to the local marina and the remnants of industry that gave the navigation some of its work. New housing around Ferry Lane has given the waterway a different chracter. At Tottenham locks the River Lea departs from the navigation into what can only be described as an ugly concrete channel deviod of wildlife. Without a doubt the River Lea must be one of the country’s most defiled waterways – mile after mile in mostly ugly concrete channel.
A long time ago when the Lee Navigation was first built many of the river sections remained accessible for local industry and wharves. The section of River Lea from the bottom of Tottenham locks was one such example which served wharves along Ferry Lane. There were probably about 8 access points to different parts of the river, some with locks to facilitate access, and this unique relationship between the Lee Navigation and the River Lea made a success story out of what was essentially a very difficult river to navigate. Now of course the Lee Navigation has forsaken the River Lea, and any relationship with the old river is at best one of conveniency. 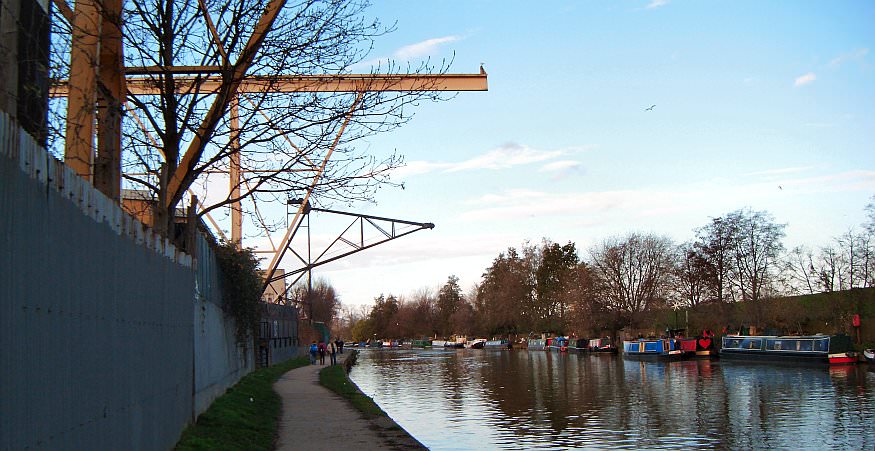 The River Lea just to the north of Springfield. This old view shows the overhead gantries that were used for loading barges. The trees on the left side run along the side of Markfield recreation grounds. The well known Markfield Beam Engines are situated here and worth a visit. Its best to moor by Springfield Park and walk north to the beam engines.

North of Markfield the navigation turns sharp left by the pipe bridge for Tottenham locks. The ‘original’ river goes straight ahead & shallows! 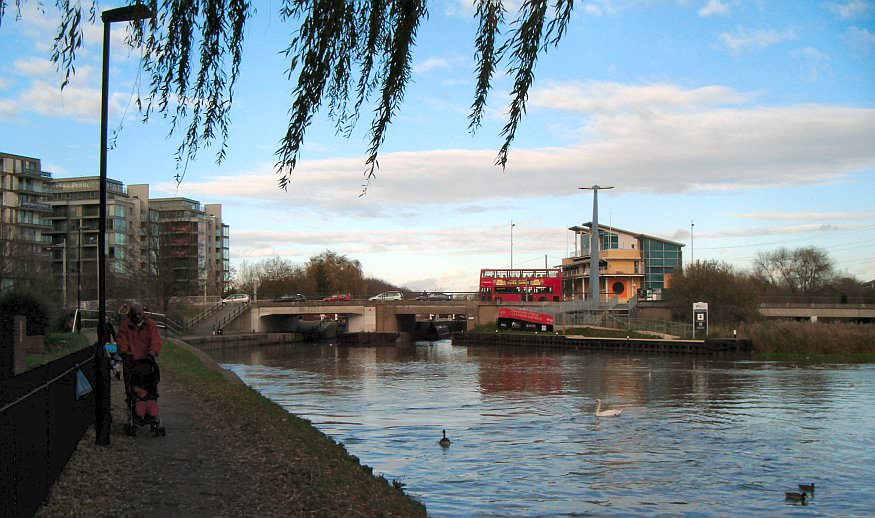 Tottenham Locks – with new developments in evidence especially on the west side.
At this point the River Lea originally carried on for a considerable distance northwards, for the original Tottenham Lock was closer to Stonebridge. Tottenham locks now mark a solid 11½ miles of artificial cut to Kings Weir near Broxbourne. 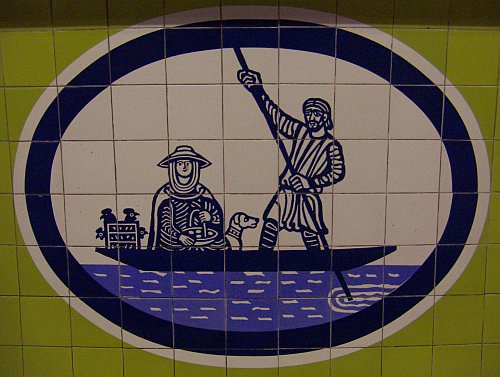 Hale Wharf with its replica River Lea powder barges, Judith & Renaissance. Built by Manor Marine in Dorset this picture was taken shortly after their arrival. The Lockwood Pipe bridge crosses the navigation in the distance and plyons are a-plenty.

The section just before Stonebridge locks. The navigation is extremely shallow on the inside of this bend! 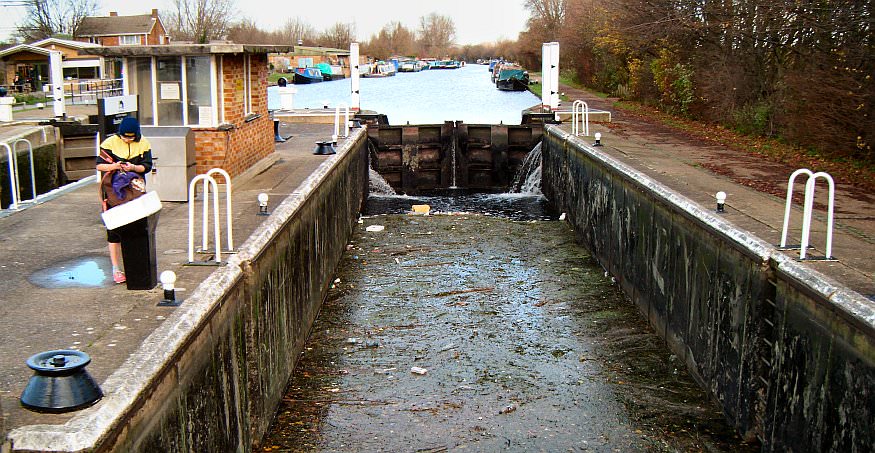 Stonebridge locks in the winter of 2012 with the usual rubbish that’s seen in it’s lock chamber.
As one leaves Stonebridge and heads north, Alexandra Palace will be seen to the west. It becomes more prominent as one passes Tottenham Marshes.
The electricity pylons have so far kept a discreete distance from the Lee Navigation/River Lea. Their presence becomes really obvious as one travels between Tottenham and Stonebridge locks, and they tail the Lee Navigation most of the way to the junction with the River Stort.
A stopover at Stonebridge is the best option for a sortie to the huge IKEA and Tesco superstores nearby (or walk back to Tottenham and its superstores including Lidl’s.)

The Lee Navigation at Edmonton – with the new incinerator chimney evident – November 2012
This stretch of water is one of the most industrialised stretches so far. There’s factories, scrapyards, bus depots, car repair yards, furniture depots, a huge incinerator (its chimney can be seen on the left) and all the other industries that I’ve lost count of. Currently there’s quite a bit of redeveloping going on. And there’s often a lot of dust blowing about if its dry weather.
There are many wharves too, no longer used but a good reminder of the canal’s commercial days. Northwards the navigation is straight as an arrow for well over a mile to Picketts Lock. Heading as straight as possible is typical Lee Navigation fanfare, and a strong reminder the navigation is purely a canal and absolutely no more than that. The promoters’ original aim in the heady days of the 1770’s was to build the shortest and most direct route to Hertford. They didnt want a canal that wandered about all over the place – just one that got down to the serious business of getting there!
The navigation at Edmonton is often a rather uninviting place with its industry and 24hr trafic, but somehow it’s always a popular fishing spot.

The A406 North Circular Road crossing at the north end of the Edmonton section
Amongst the industries around here are the superstores just to the west of the bridge. Its possible to tie up by the Lea Valley Business Centre south of the bridge and take a trip to Ikea, Tesco’s Screwfix, Wickes, Mothercare, MFI etc. However it would do better to moor at Stonebridge and walk across the Tottenham marshes – or stroll along Watermead Way.
This stretch of the navigation was once on the banks of the River Lea itself. Cook’s Ferry, with its inn, was a popular crossing point for travellers between the two sides of the Lea Valley, and the two waterways ran practically side by side. On the east banks of the Lea was Becontree (detatched) this being an annexe of the main village near Dagenham. Cook’s Ferry Inn lasted until 1973 in various forms (the River Lea itself had been filled in several years before) and the North Circular Road bridge now stands where the famous inn once stood. 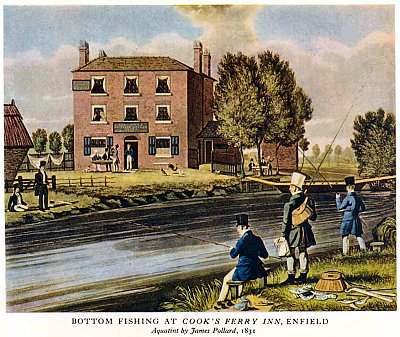 The inn saw many famous bands during the sixties/early seventies – it’s long list includes Led Zeppelin, Mott the Hoople, Wishbone Ash, Lindisfarne, Hawkwind, Jethro Tull, The Faces, Fleetwood Mac, Uriah Heap, The Animals, The Who, The Yardbirds, Rory Galagher, Manfred Mann.
Here ‘s a link to a pic of The Who in concert at Cook’s Ferry Inn. Led Zeppelin played there in 1969 – link to flyer. Other dates: Fleetwood Mac featured on October 16th 1967 whilst Jethro Tull played gigs on 25 March & 23 Sept 1968 and Rory Galagher on 20th May 1968.
Beyond the North Circular Road and the Edmonton Incinerator plant, the Lee Navigation continues its straight-as-an-arrow run to Picketts Lock, complimented by pylons on both sides of the waterway.