The River Lea leaves the navigation at this point. As one’s boat enters Old Ford locks, technically they are on a canal. This was known sometimes as the Hackney canal (or Hackney Navigation Cut). From here to Hertford its 24 miles – 19 miles of which is actually a canal.
Sometimes the navigation has stretches of canal that do take on the appearance of a river. Despite its urban setting, the Hackney Cut is, in my view, without a doubt the most pleasant of the canal sections south of Cheshunt. This is all the more ironic when one realises that the Hackney Cut was one of the earlier artificial cuts built. 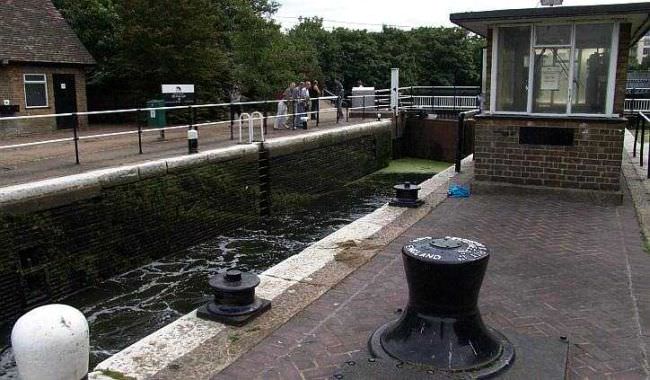 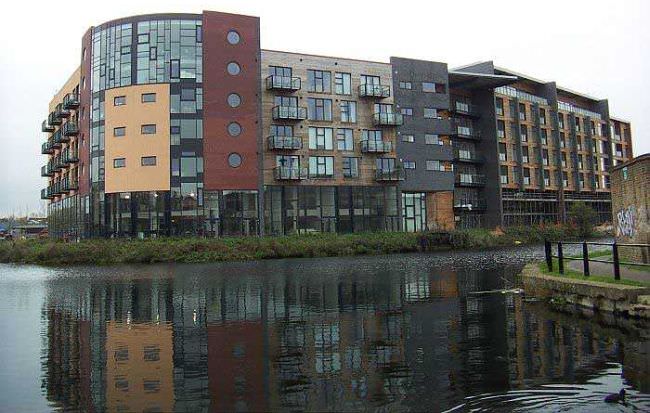 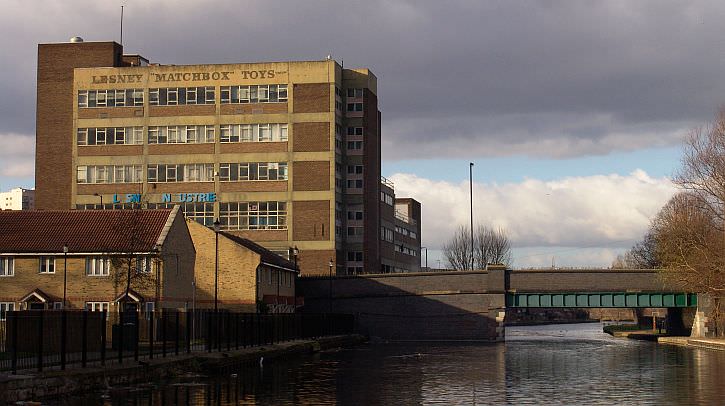 The old Lesneys factory by Marshgate bridge at Homerton. I used to work here in the 1980’s, when there was still some commercial traffic on the navigation. Our office was on the top floor and offered excellent views. The houses on the left are on the site of the Lesney factory annexe. The view (below) taken from my office window in January 1987 shows the former factory annexe on the opposite side of Marshgate bridge 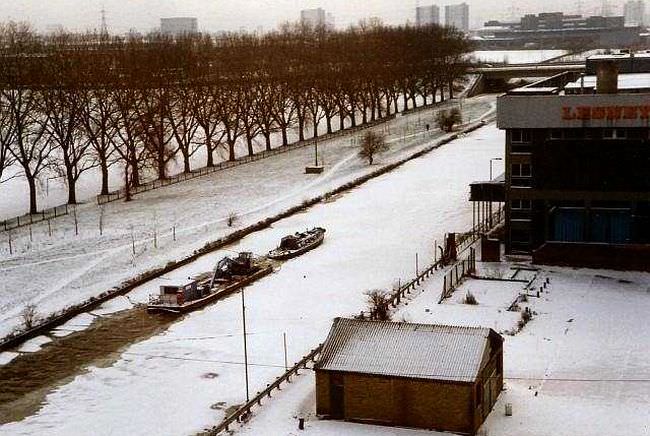 Seen from my office window in January 1987: An unidentified BW Lee & Stort tug is towing a workboat through the ice. These tugs were named after reservoirs and are still used. One has been recorded as working as far north as Leighton Buzzard, miles from its home ground
For more pics on Lesney’s see 28 days later. The factory is to be demolished and replaced by housing, with mooring for boats. Report from Hackney Gazette 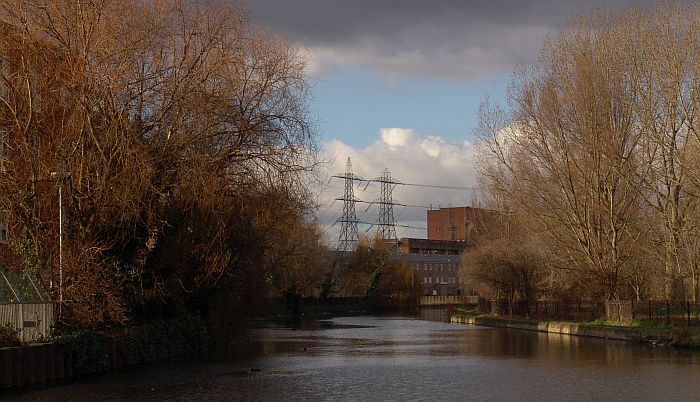 Clapton Power station. The Hackney cut takes on a river like appearance and winds its way gently towards Lea Bridge
Midway along the stretch by Clapton power station a lock once stood. It was called Brick lock and operated until 1872. It was relegated to flood protection before being finally demolished in 1931. Flood defence was transferred to the new Pond Lane gates to the north. (These have now also been made redundant.)
The lock was known fully as Hackney Brick Cistern Lock, or Homerton Lock. On some maps it was called just Hackney Brick lock. 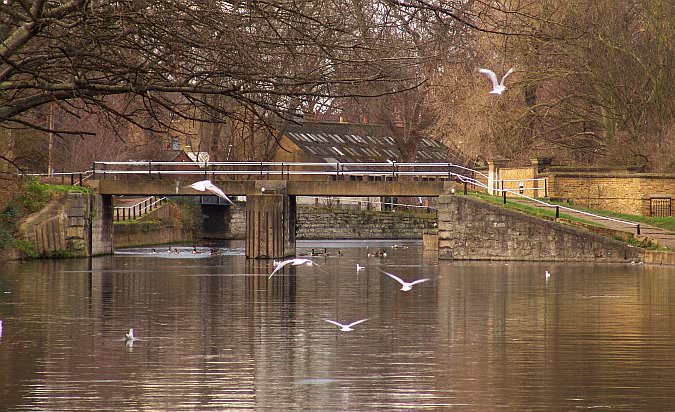 Pond Lane bridge. There used to be stop gates here at one time to prevent floods reaching further up the valley
In the first part of the Twentieth Century Lea Bridge and Tottenham, two places where one would not expect flooding, were badly flooded due to a combination of high tides and rainfall on two occasions. It’s still feasibly possible for extreme tides from the Thames to reach as far as Tottenham, although such an event is quite unlikely now the Thames Barrier is the first line of defence. 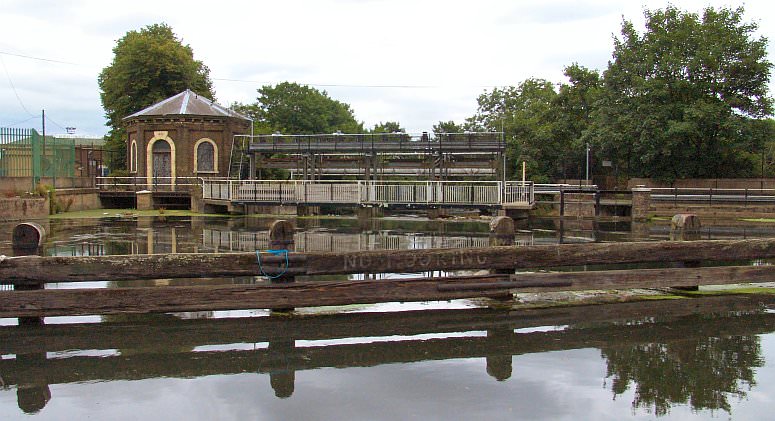 Middlesex Filter Beds weir at Lea Bridge where the River Lea and the Lee Navigation separate their ways southwards.
The Filter Beds closed in 1969 and are now a local nature reserve where around 60 species of bird can be seen. Boaters can moor directly outside the entrance to the beds – just to the south of Pond Lane Bridge. 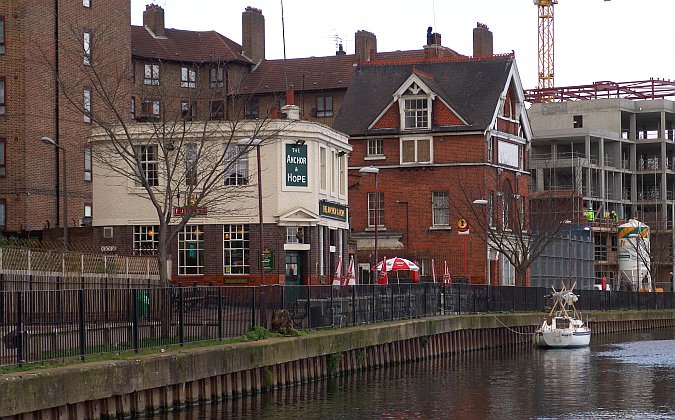 The Anchor and Hope, a renowed riverside pub at Clapton. There used to be a network of river channels here, and in the Victorian heyday many rowboats could be made for hire from the boat houses along these secondary channels sited on the Clapton side

View of Walthamstow Marshes and the Lee Navigation/River Lea looking south – from a train heading for Liverpool Street. 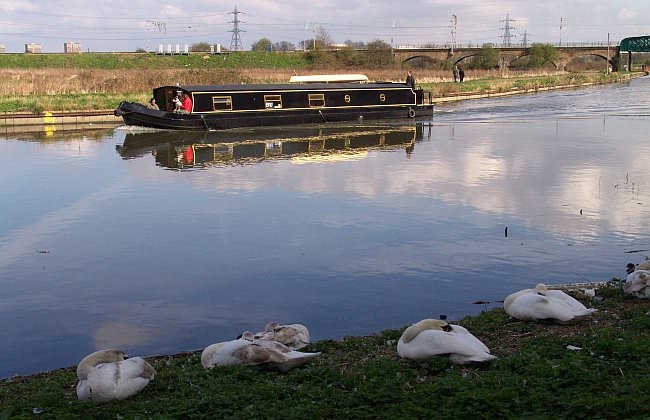 Swans at rest as a widebeam passes the marshes, where one of the earliest powered flights occured.
In 1909 Alliott Verdon Roe made the first British powered flight across Walthamstow Marsh. It was a very short flight but sufficient to set a record. Roe had his workshops in the railway arches of the bridge seen above which has a blue plaque to remind us of this momentous event. 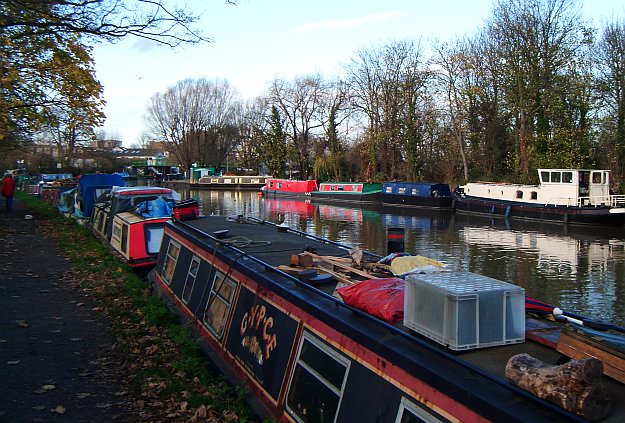 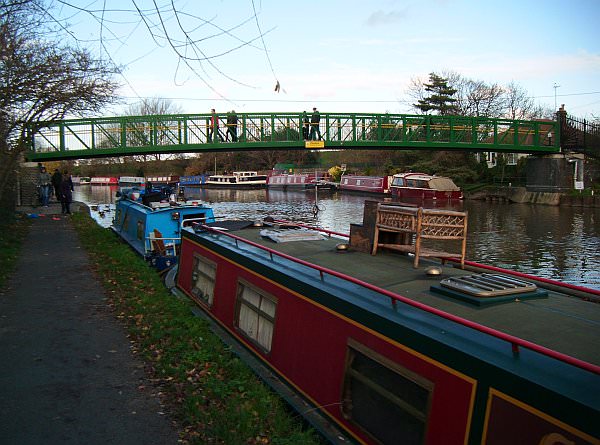 A view of the new footbridge at Springfield – November 2012
There seem to be more swans on the stretch around Springfield than on the entire Thames!
This stretch is undoubtedly one of the most popular stretches of the River Lea. Sadly its often also one of the most rubbish strewn stretches on the waterway, and the local conservation groups have regular clearance programmes to try to keep this otherwise very pretty stretch of river clean. Its quite a struggle as the amount of rubbish can be overwhelming. The stories of rubbish (and weeds) on the waterway is what usually puts people off the idea of boating on the Lee Navigation.

Next: Tottenham & Edmonton to Picketts Lock