The Lee Navigation was actually built in stages from the 1600’s to the Mid 1800’s, with the main body of the work being undertaken in the 1770’s to build new lengthy canal sections to shorten the route between the Thames and Hertford

The River Lea rises near Luton, and for the first part of its course to the Thames, it is a small river that winds its way through the Hertfordshire countryside. Upon reaching Hertford, it essentially becomes the Lee Navigation. The original navigable River Lea, or the ‘Barge River’ as it was known prior to 1770, the year the Lee Navigation was opened, has lost possibly at least 80% of its original course through construction of flood relief channels and huge reservoirs that are now a prominent feature of the Lea Valley. In essence it can be said that the River Lea is one of the UK’s most murdered waterways.
The real River Lea is in many places a shallow waterway in an ugly concrete channel so devoid of wildlife and fauna. It is only recently that redressing the balance was made with the construction of several new channels, one southwards from Fielde’s Weir, and another from Holyfield Weir past Cheshunt and Waltham Abbey.
The Lee Navigation, the original man-made route, is without a doubt the more pleasant watercourse through the rather dreary Lower Lea Valley southwards from Enfield. It as one would expect, consists mostly of canal. In its heyday it linked up with a number of sections of the River Lea. Alas most of these connections into the River Lea have now been lost. The complete loss of the route into the centre of Waltham Abbey, as well as a number of secondary river channels that consituted many extra miles of navigation, is nothing short of a massive disappointment and shows just how screwed up the once natural water courses of the Lea valley have become.
On a rather more positive note, the Lee and Stort Navigations are the only waterways on the national system which offer an incursion into the County of Essex. Substantial lengths of the Lee Navigation lie within Essex (most are actually navigable lengths of the River Lea.)
Another point of interest is the navigation offers a chance to sail in and out of Earth’s western hemisphere, whilst the Stort Navigation lies entirely in the eastern hemisphere of Planet Earth! In comparision the only other UK waterways that transit the Greenwich meridan line are the eastern extremities of the River Witham/Witham Navigable Drains.
This feature looks at the Lee Navigation (and the remaning bits of River Lea used as part of the navigation) between Bow Locks and Hertford, a distance of about 26 miles (28 from Limehouse.) 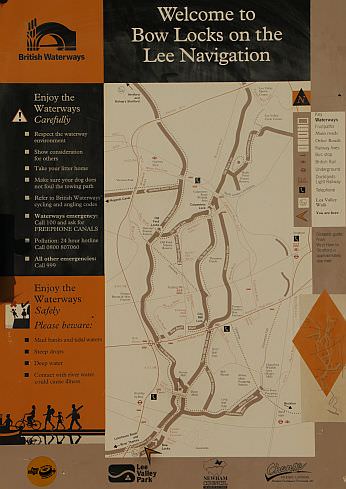 Map at Bow Locks denotes start of the Lee Navigation
The River Lea enters the Thames at Lea Mouth, near Canning Town, opposite the Millnenium Dome. The first part of the River Lea is known as Bow Creek and its a fiercely tidal stretch of waterway that is rarely used for navigation. This section is under the supervision of the Port of London Authority and BW’s role kicks in just to the south of Bow Locks.
The Lee Navigation originally began at Bow Locks, as the tidal River Lea was the only southern entry/exit point prior to 1770 when the Limehouse cut was opened.
There are four entry points into the Lee Navigation. These are via the Limehouse Cut, via Bow Locks, via Three Mills/City Mills Locks or via the Hertford Union canal. This latter point enters the old Hackney Navigation Canal section above Old Ford Locks.
Link: The Lee & Stort Navigations Boaters Group on Facebook 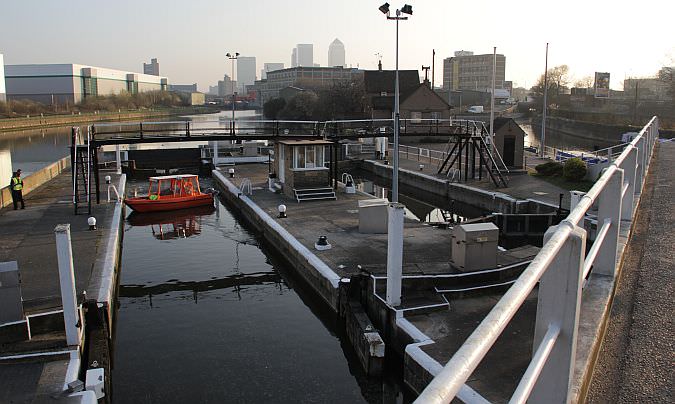 Bow Locks – the start of the Lee Navigation. The Limehouse Cut is at far right

Bow Locks are not used much as most traffic goes via the Limehouse Cut to the right.

The railway bridges between Bow Locks and Three Mills. On the left is the Lee Navigation and on the right is the River Lea. 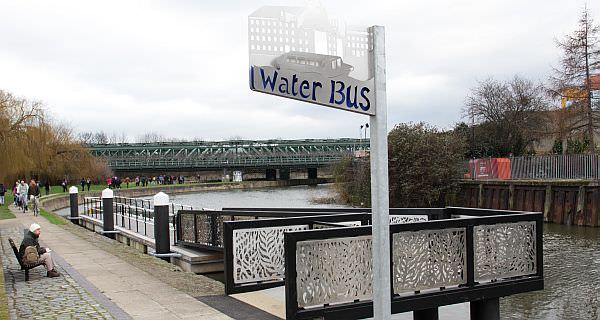 Waterbus stop built for London’s Olympic games. The bridge carrying the District line can be seen 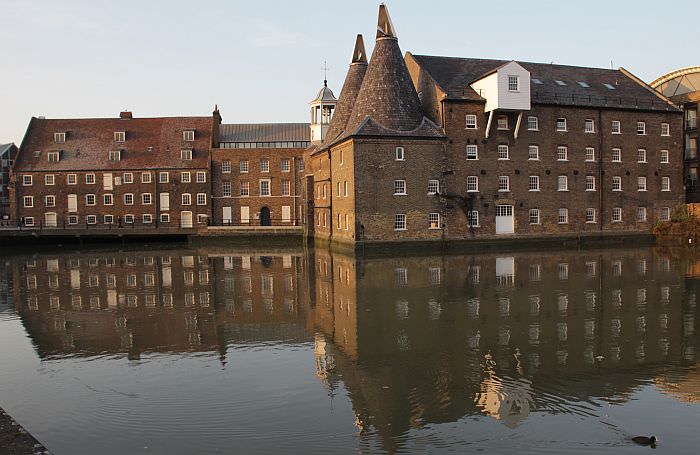 Three Mills at Bow. This lovely tidal mill is open to the public and part of the buildings are a TV studio turning out renowed programmes such as Bad Girls, Footballers Wives and Tim Burton’s recent film Corpse Bride 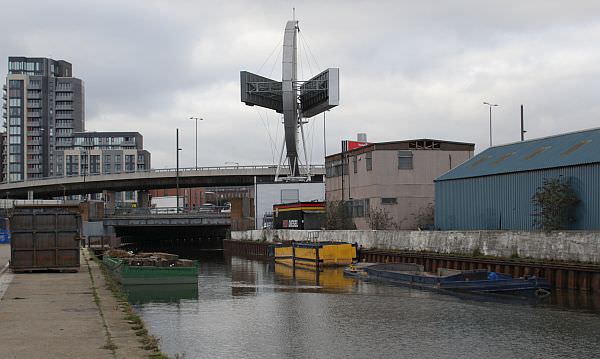 At Bow Bridge, the River Lea/Lee Navigation dives under a lengthy bridge and passes the entrance to the Bow Back Rivers. The A12/A102 motorway Blackwall Tunnel and Great Eastern railway lines are passed. Traffic on the motorway can often be slower than boats on the Lee Navigation! British Waterways built a new towpath under the Bow interchange for the Olympic Games. This allows pedestrians to continune along the navigation unhindered by road traffic. 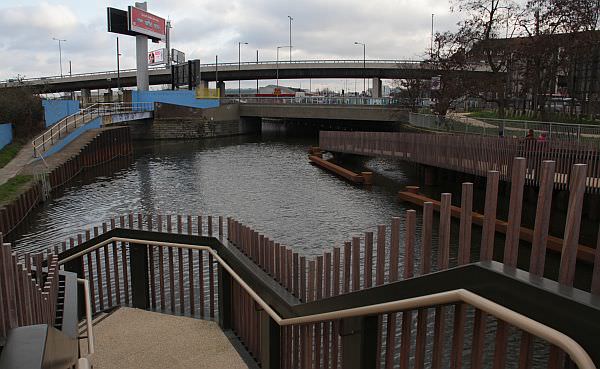 On the north side of Bow Interchange. The Bow Back River goes off at left. The bridge was built to facilitate access to the new towpath through the interchange. 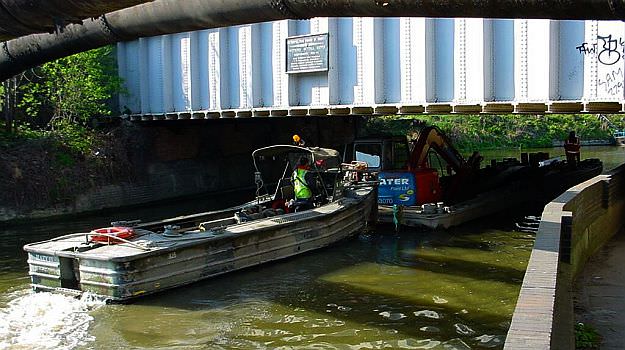 The North Outfall Sewer cross the waterway below Old Ford locks. This is Land & Water’s dredging team heading under the aqueduct towards the Old River Lea during 2003 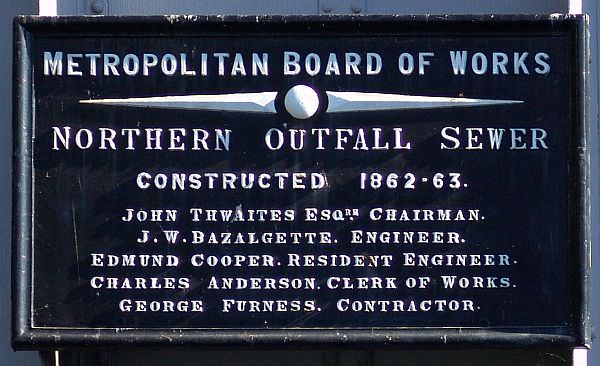 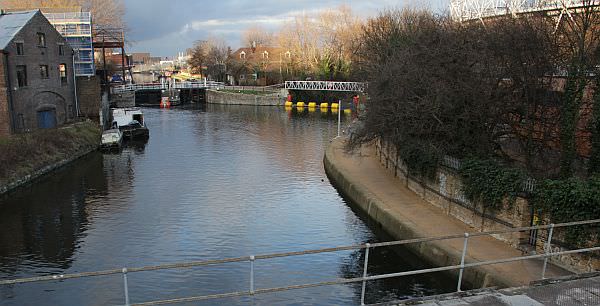 Old Ford Locks and Junction. The (Old) River Lea leaves to the right and Old Ford Locks mark the start of the Hackney Navigation Canal, a two mile stretch of artifical cut that rejoins the river at Lea Bridge. The Olympic Stadium can just be seen top right.