View looking from the bridge at West Brompton to Earls Court exhbition centre two. The interesting aspect of this picture is the railway bounday as indicated by the fencing on the left. This was the full width of the Kensington canal’s land. The large building on the extreme left is the Empress State building 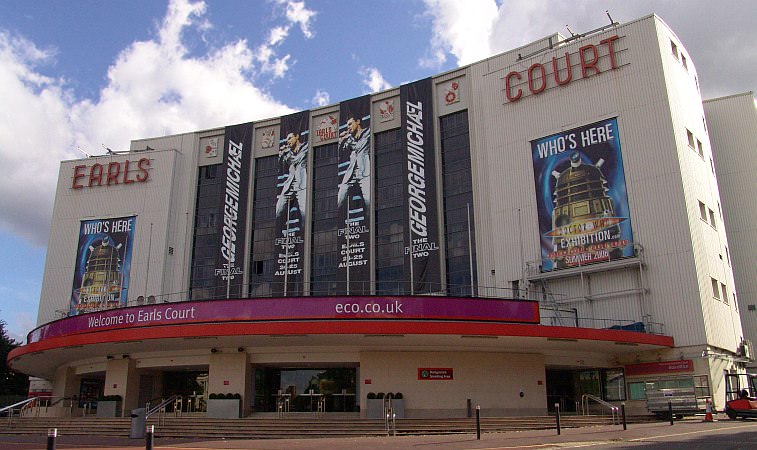 There’s no mistaking this building! This is the entrance to the Exhibition Centre at Earls Court. George Michael and Dr Who fans will no doubt know when this picture was taken! The Earls Court exhibition centre was built on the site that held the Great Exhibition Fair, which was in turn built partially on the course of the Kensington Canal 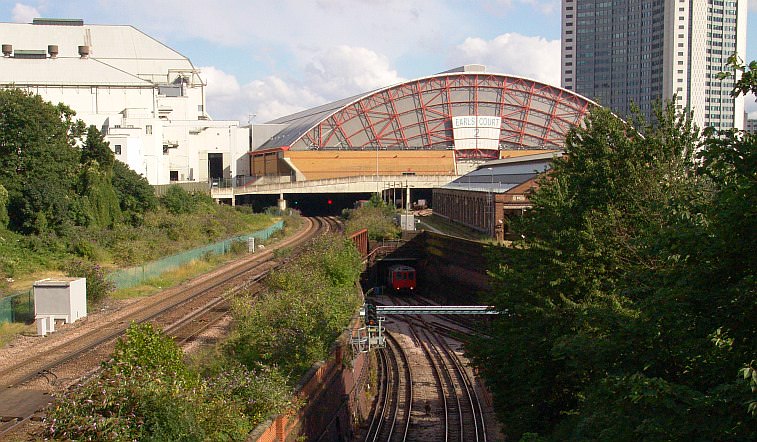 A view of Earls Court exhibition centres from Cromwell Road on the north side. Exhbition halls 1 and 2 can be seen as well as the Empress State building. On the right part of the Lille Bridge depot (the track maintenance depot for the underground) is visible. The Kensington canal would have run along the east side, for the alignment along which the tube runs is mostly extra land bought to the west. The District line train seen is on a Richmond working, and it is passing the point where the Ealing/Richmond and Olympia lines diverge. At this point it is traversing the former approximate western boundary of the Kensington canal 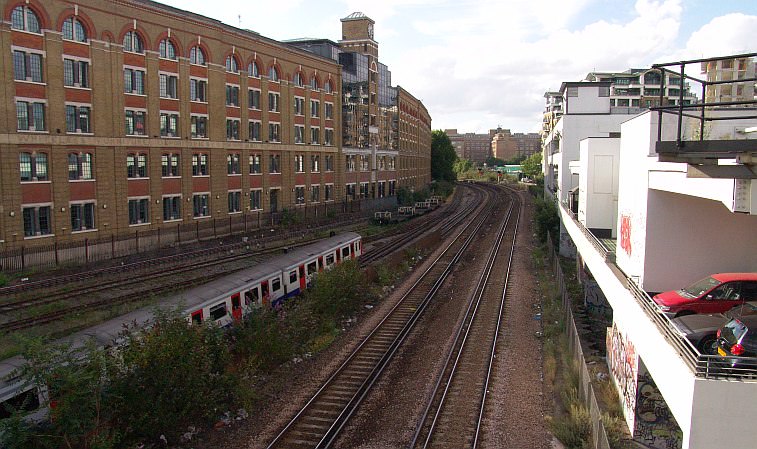 A view looking north from Cromwell Road towards Olympia. The prominent Charles House sited on Kensington Road in Olympia is visible in the far distance. This scene essentially shows the rest of the Kensington canal route as it headed straight towards its terminus basin, The railway simply folows the old branch line alignment that served the canal basin and the curve in the tracks is where the railway and canal route joined just south of the terminal basin site. The District line train is on an Olympia working, and the little used connection to Lille Bridge depot can be seen coming in from the left (most of the maintainence trains to/from Lille Bridge use the spur line from West Kensington station). The Kensington canal’s lock cottage stood at this location (now occupied by the white building with the parked cars) until 1998 and, despite protests at the historical significance it had, was demolished to make way for the new development. Lille Bridge signifies the fact that the crossing over the canal was known by that name 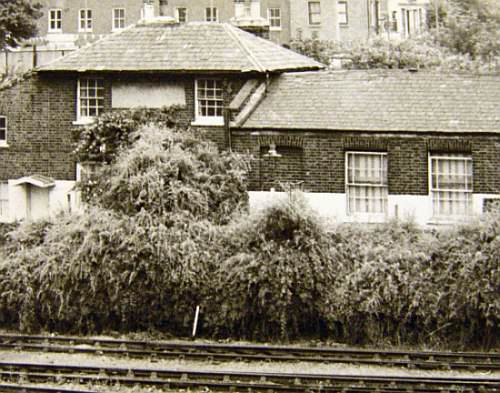 This is a view of the old lock cottages (it doubled as the boardroom for the sibling railway company that brought its tracks to Olympia.) Year of photograph not known but possibly taken during the 1970’s. *Acknowledgements to Kensington & Chelsea Libraries Local Studies Centre for allowing London Canals permission to use this* 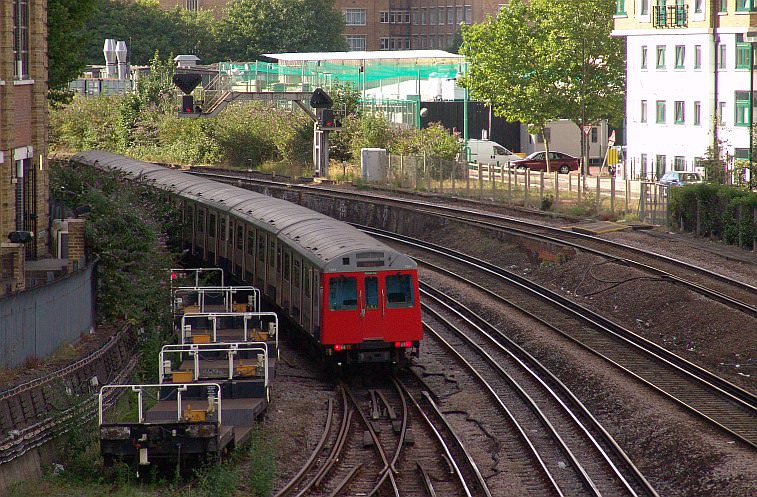 The District line train on its way to Olympia with trucks stabled on the Lille Bridge depot headshunt. Above the District Line train can be seen green fencing. This surrounds the garden centre of the Sainsbury’s Homebase, built on the site of the Kensington canal basin

This Southern electrostar has just departed from Olympia station en route to Clapham Junction. The land to the right of the railway (and upon which the road also stands) was the approach to the Kensington canal’s terminus basin 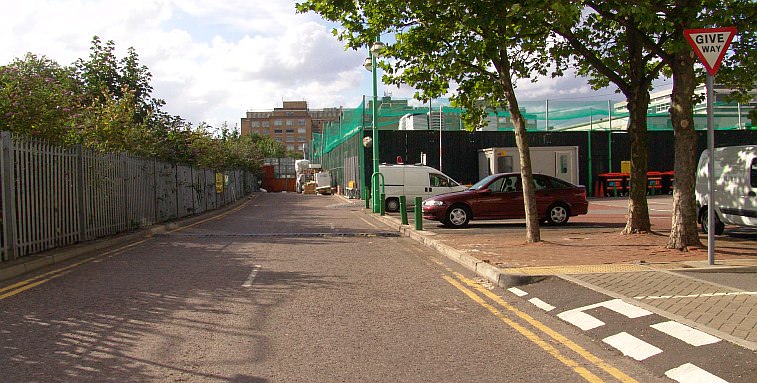 A view looking to the terminal basin area, now built upon by the Homebase centre 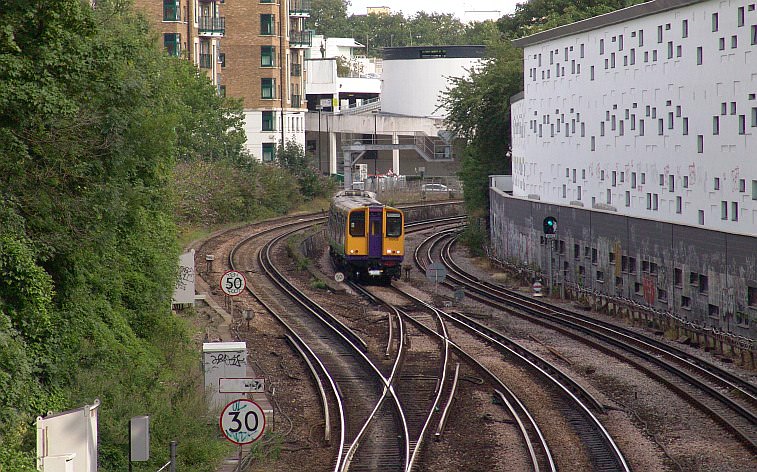 A London Overground, utilising the now superseeded 315 class stock, on a Clapham Junction – Willesden run approaching Olympia station. The canal basin was on the left behind the bushes, and this scene would have at one time viewed part of the canal basin and lock/lock cottage 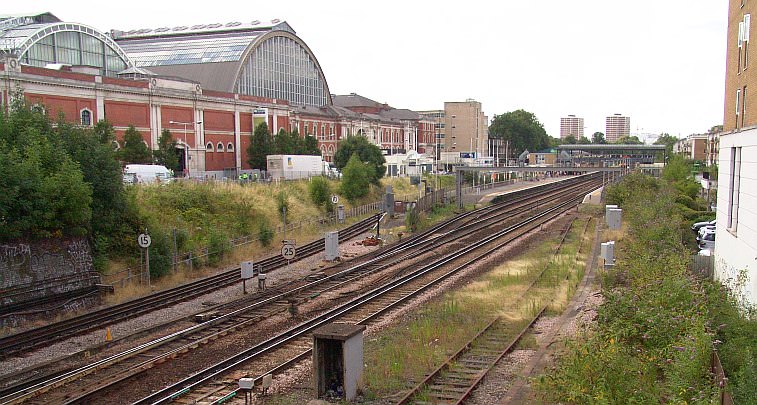 Although not part of the Kensington canal route, this picture of Olympia station shows the site of the original West London terminus station. The rail tracks in the foreground are on the alignment of the former short branch that led to the south side of Hammersmith Road where the transhipment sidings alongside the Kensington canal basin stood. Kensington Olympia is less substantial than it used to be. It once had four through platforms (consisting of two centre islands)and I remember the station being used on occasions when Paddington was closed and West of England main and local Reading trains began their journeys here. Such workings are not possible now since the junction at Old Oak was taken out to enable the Eurostar depot to be constructed there. With the transfer of the Eurostar depot to Stratford, the Old Oak site is once again available, and who knows, a new spur onto the GWR main lines may well be possible some time in the future