The opening of the Regents Canal in 1820 and its success led the way for a canal to be built in Kensington. Lord Kensington desired that Counter’s Creek (mainly a backwater for carrying sewerage into the Thames) was made navigable it would bring new trade to Kensington as well as new sources of income for Lord Kensington. Contracts for the building of the canal were made in 1824, at a cost of £7969. It was evident that this was too little and the company called in John Rennie to give an assessment on the canal works. Rennie decreed that £34,000 would be neccessary to complete the canal. It finally opened in August 1828. Plans to extend it to the Grand Junction at Westbourne via eleven locks never came to frutition and the Kensington Canal fortunes didn’t bid well for this was also the coming of the railway age
The ‘canal’ was really an improved, widened Counter’s Creek. Just a short section with a lock at the top end into the Kensington basin was true canal. The ‘canal’ was essentially a river navigation. There was an intermediate basin at Lille Bridge (by what is now West Brompton District Line station.) The canal basin at Kensington Olympia was served by a lane off Warwick Road as well as a branch siding from the very first Kensington railway station. The lock-keepers house later became the headquarters of the West London railway company.
The waterway was bought up by the railway in 1839. The West London railway (now often referred to as the West London line) made a terminus where Olympia station now stands. There was a branch from the station to the canal basin on the south side of the Hammersmith Road (now Kensington High Street) and trade was conducted between canal and railway for a short while. However reciepts were low and the railway closed just six months after opening
A grouping of railway companies (the LNWR, GWR, LBSCR and LSWR) decided to incoporate the ill fated Kensington railway route into the grand plans for a West London extension railway which would form a link between the four major railway companies of the time. An act of 1859 authorised the filling in of the canal and building of the railway southwards to Clapham Junction. The line opened in 1863, utilising the filled in canal route between Kensington Olympia and the Kings Road. The year is somewhat interesting as that is when the first underground railway in the world opened between Paddington and High Holborn (now Farringdon) station.
Its lower reaches which survived the railway construction served industries around Lots Road as well as the power station that powered the London Underground railway network. The last stretch of canal to be used was closed in the 1970’s, although the last commercial boats actually used it in 1967. The site is now a highways depot for the Royal Borough of Kensington and Chelsea. The British Waterways Board had the dubious pleasure of being the owners of the last bit of the Kensington Canal in its final decade of use! The lock cottage, long since used for railway purposes, survived until 1998 when it was demolished despite protests from both railway and canal historians.
The Kensington canal is the not the only waterway in London entirely built upon by railways. The Croydon Canal was another iron road victim. The Kensington route was utitlised by the Metropolitan and District railways, as well as the West London Line.
The southern end of the canal where it began at Lots Road has undergone major changes in the last few years. The Chelsea Harbour etstate has cropped up providing a focus for this previoulsy industrial corner of London, and the closure of Lots Road power station has provided further opportunites that have yet to be seen. The power station used to have its coal delivered by barges and this was the last commercial operation on the Chelsea Creek 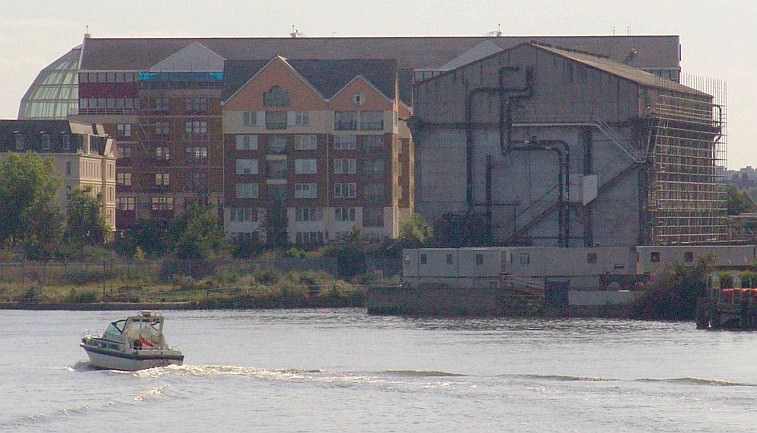 View from Battersea bridge looking towards the Chelsea Harbour development. The entrance to the Chelsea Creek is in the middle of the picture, just right of the cruiser. Notice the large industrial building which can be seen in the next picture also. 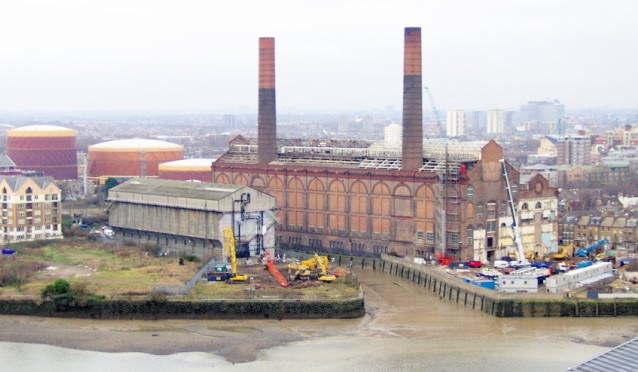 A view of the entrance to Chelsea (or Counters) Creek from the opposite side of the Thames. The creek afforded access to the Kensington Canal whose entrance was sited adjacent to the gasometers (Many thanks to Ian Bull for the use of this picture) 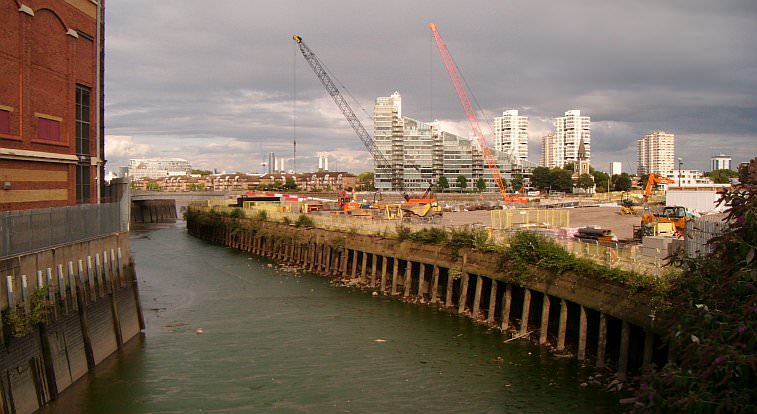 View of Chelsea Creek on south side of Lots Road power station. The entrance from the Thames can just be seen in the distance. 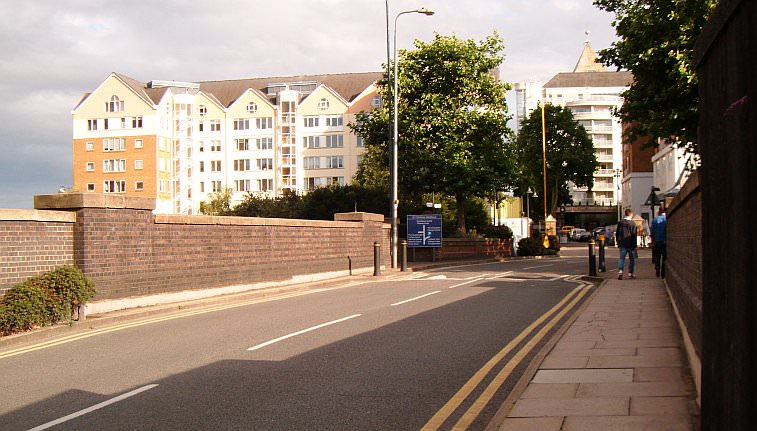 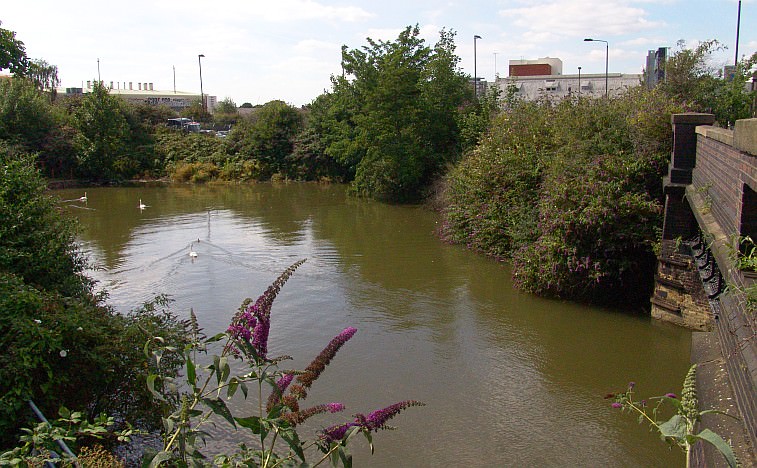 On the west side of Lots Road bridge Chelsea Creek runs to where its truncated by the railway. The Kensington Canal began at this point. 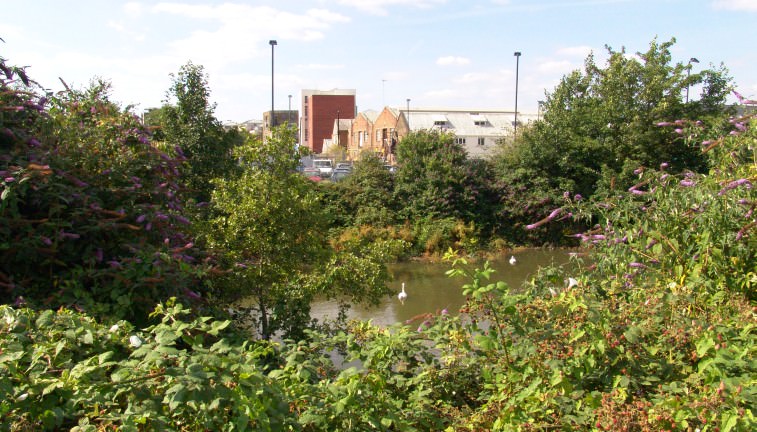 Looking form a different viewpoint, much obscured by foilage however, but with the swans still in view, the canal entrance was in the middle of the picture. The buildings mark the canal’s alignment as it made its way towards the Kings Road, and on the next page these buildings will be seen in closer perspective

The Kensington Canal entrance in 1972 (arrowed right). The guillotine structure was once a lock to a basin at the far side of the railway. 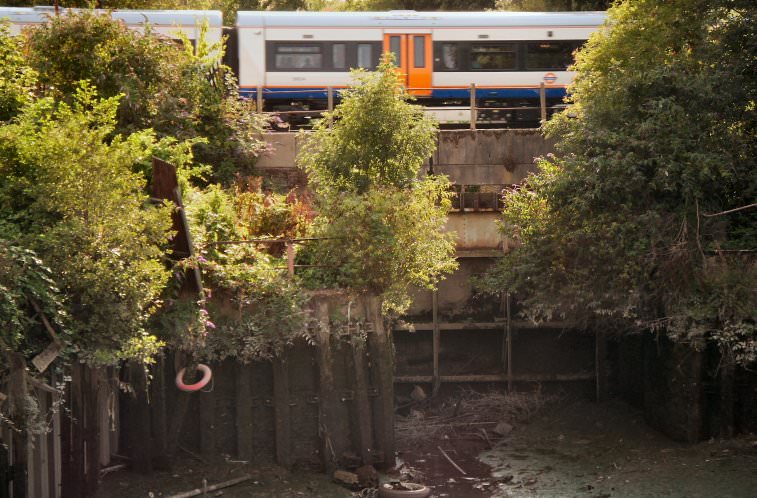