The former canal route from the Thames to Victoria

The Grosvenor Canal was the shortest canal built in London. Its no longer in use, simply being a water feature nowadays than a working canal. It was built by the Chelsea Waterworks Company, whose premises were situated by the River Thames at Pimlico. The remaining waterworks building, known as the Western Pumping Station and built in 1875, can stil be seen today by both road and rail users. The Chelsea company initially dug a navigable tidal inlet in 1725 to provide waterborne access from the Thames to their works. However, it was to be almost a hundred years later before they decided to build a proper canal in lieu of the tidal creek
The short canal was opened in 1823 and in its original guise it went right up to where the Victoria bus terminus is sited. The canal also served as a water supply channel for the company’s reservoirs 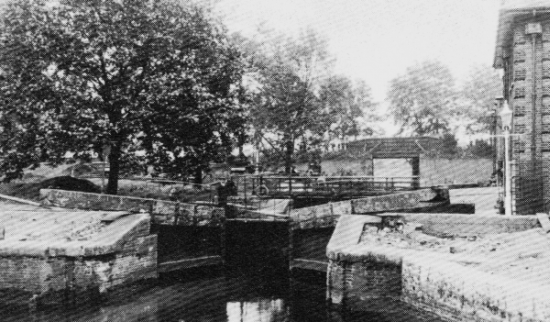 The entrance lock on the Grosvenor Canal during the 1920’s. Dimensions 90ft x 18 ft 6in.
Much of the canal subsequently disappeared under the new railway route being built at Victoria. In less than eighteen months and costing only £84,000, on 1st June 1860 the first railway bridge across the Thames in London gave the railways access to the area that had been forfeited by the canal. The canal was initially cut back to Belgrave Road. A further regression was made when the number of platforms at Victoria were increased (these are now platforms 15 to 19) and the canal’s new terminus was at Ebury Bridge Road (then called Chelsea Bridge.)
The canal was once again cut back in 1928-9. A wider and deeper channel was built and lined in concrete. It’s pre 1928 length to Ebury Bridge had been 437 yards, and post 1928 was just 163 yards. The new (present) lock was built to dimensions of 140ft x 25ft 4ins.
The land made vacant by the shortened canal was soon made available for council housing. The canal itself re-opened in July 1929 by Vivian Rogers, the Mayor of Westminster. It does seem that the Grosvenor was cut back again further, and so not much more than a mere length of cut off the Thames. However the increased dimensions enabled much larger barges to be used and it was utilised for waste disposal, a role it continued through to the last days of operation. 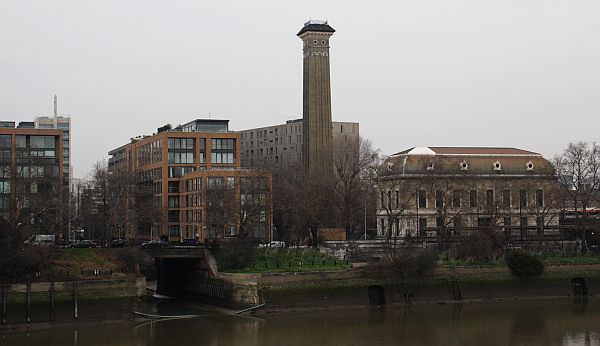 Entrance to the Grosvenor Canal – 2012. The GJCCo Water Company tower and works are prominent
The Grosvenor was the very last commercial canal to operate in London, outlasting all other traffic on the Grand Surrey, Regents and Lee Navigation routes. Trains of garbage barges (identified by their colourful yellow superstructures) were towed from the Grosvenor down the Thames to sea where the rubbish was dumped. This work ceased at the end of the 1990’s.

The Grosvenor Dock is sited on what once seen as valuable scientific land. The best recognised naturally colonised wetland vegetation in the entire City of Westminster was recognised as being sited here. The area was composed of large wetlands fed by several waterways including the River Westbourne. The Westbourne passed at one point within around 100 yards of the Grosvenor Canal. It was reported by the old Westminster City Council that care would be taken to preserve the ecological value of the site. Unfortunately this rare fauna was swept away during re-development of the area. This showed that ecological conservation in the early 20th Century was just a whim. The destruction had begun as early as the 1860’s and saw these valuable wetalands gradually vanished under new development. One of the largest acts of destruction upon these wetlands was caused by the building of the new Chelsea Barracks. Eventually the last vestiges of this valuable scientific land was relegated to the area immediately around the Grosvenor canal, but this last fragment of such great ecological interest did not last long either, as it was too, ultimately turned over for building development.

The Grosvenor Canal as seen today

The canal has now been redeveloped as Grosvenor Waterside. This consists of flats of a mix of premium and affordable housing. Whilst the lock and part of the canal form a major feature of the site, it will be static for the swing bridge across the chamber of the lock is to be fixed. Above the lock is what is known as the Inner Dock.
An article from the Observer (Nov 2nd 2003) on freight revivial on the London canals said of the new Grosvenor development: “When complete, the old canal should be a haven of peace, away from the traffic and bustle of Victoria. Criminally, boats will be excluded.” Quite right! 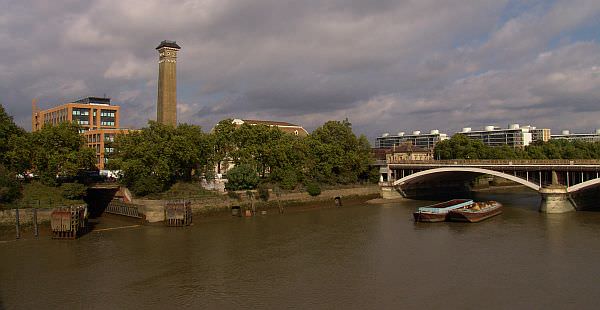 From the river can be seen the tower of 1875. The mooring dolphins at the canal entrance have now gone
On the right in the picture above is the railway bridges. On the river itself are two barges of the type that were typical of the Grosvenor’s traffic. 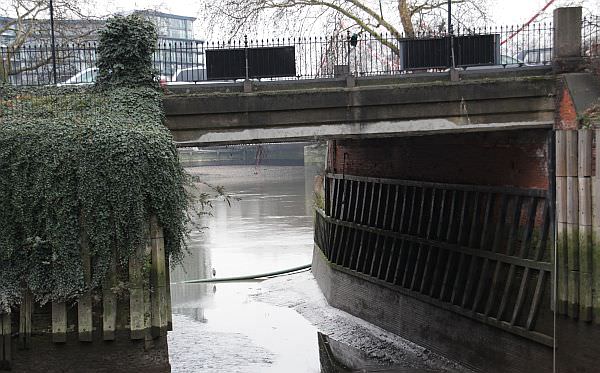 The Grosvenor Canal at work – April 1986 – Author’s own photograph 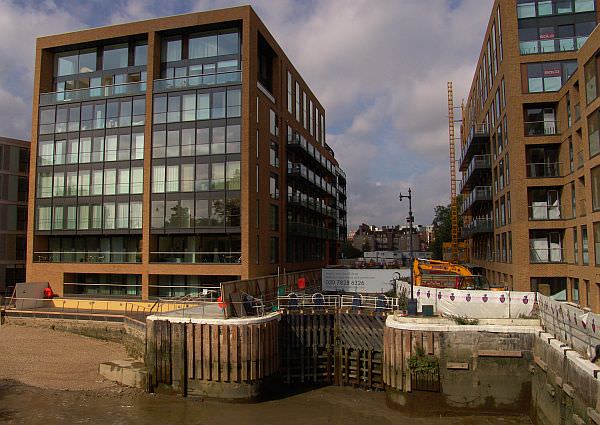 The canal seen in September 2005, with the new Grosvenor Waterside development partially finished 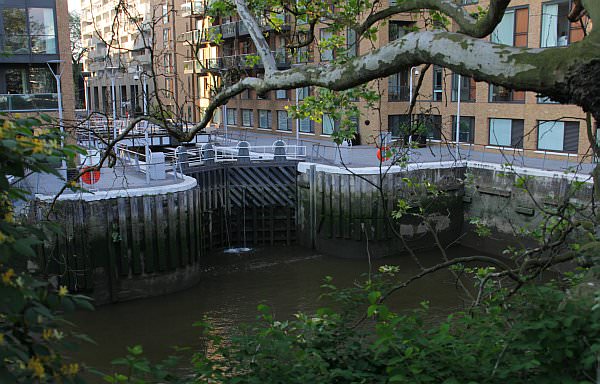 The Grosvenor Canal as it is today 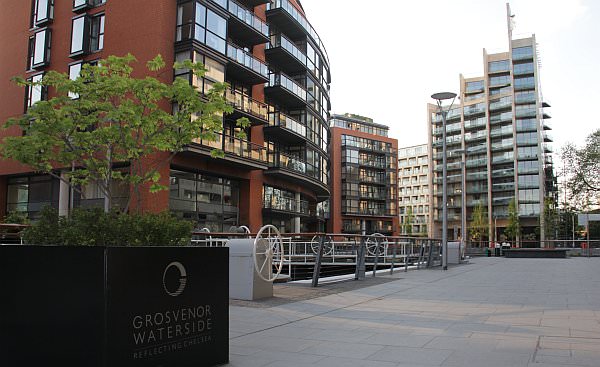 ‘Reflecting Chelsea’ is oft seen around the Grosvenor waterside estate. But is this a valid claim?
The company managing the Grosvenor estate like to say this part of the world is “reflecting Chelsea,” as numerous signs around the site declare. The truth is, this is Westminster and it is Ebury bridge, near Belgravia/Pimlico. The boundary between Westminster and Chelsea is clearly delinated as being along the A3216 main road between Sloane Square and Battersea Bridge, hence the claim of ‘reflecting Chelsea’ must be taken as a somewhat cynical attempt to blur the demarcation between the two London boroughs. This is of course a much seen trend where attempts at gentrification are made by claiming the area to be part of a much smarter locale. 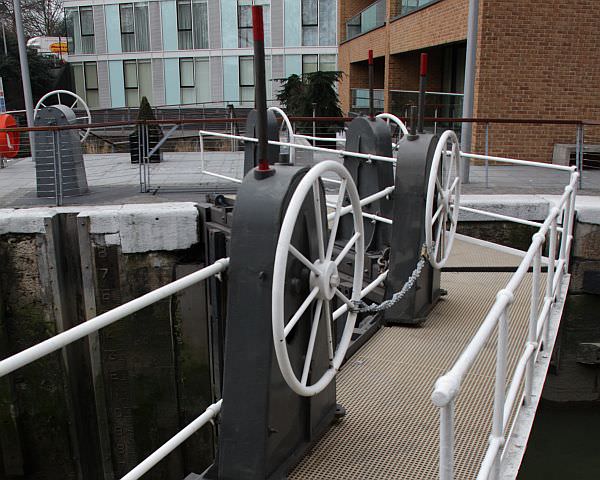 The lock gear for operating the sluices

The swing bridge mid way along the lock chamber 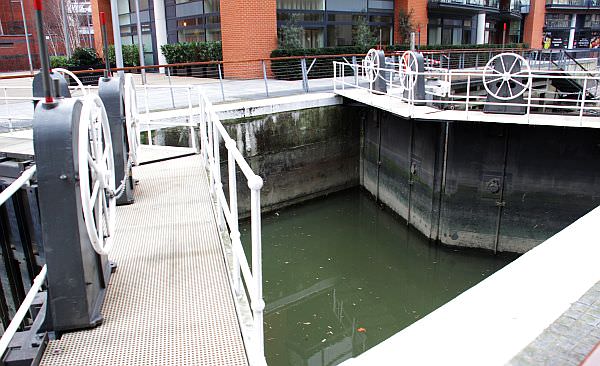 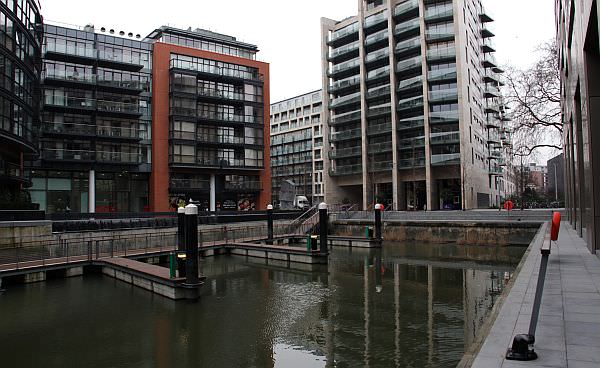 The inner basin. Wonder why pontoons were provided when boats are not allowed?
The Inner Dock has a water feature running the full length of its western side. It includes a cascade. A number of shops can be found around the inner dock area. One small plus point – rare on a modern conversion of any part of London’s man made waterways – is the inclusion of small floating areas for the benefit of wildlife. 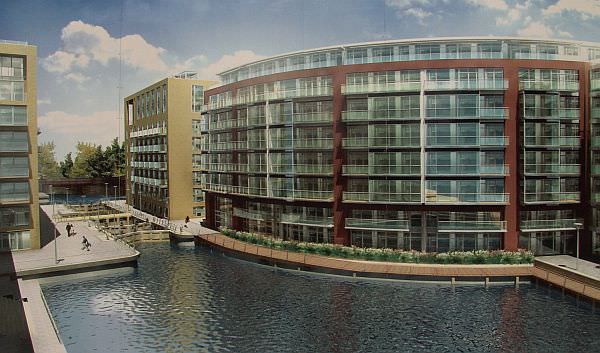 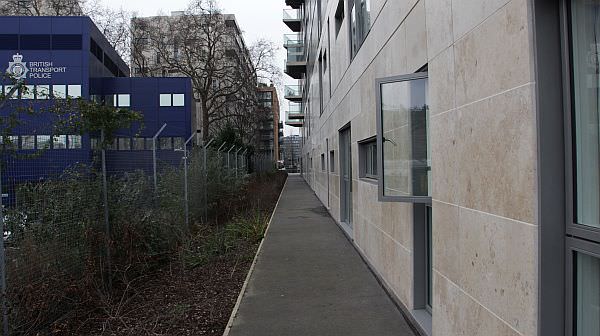 This path alongside the modern development north of the Inner Dock follows the old canal alignment
The Grosvenor Canal continued to Victoria at one time. It ran straight on from this point as far as Ebury Bridge where it then turned slightly eastwards. The canal then ran through what are now platforms 15 to 19 of Victoria Station, and much of the main concourse and frontage of Victoria station was where the canal basin was sited. 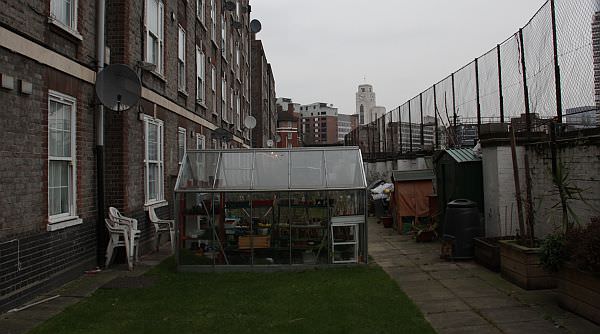 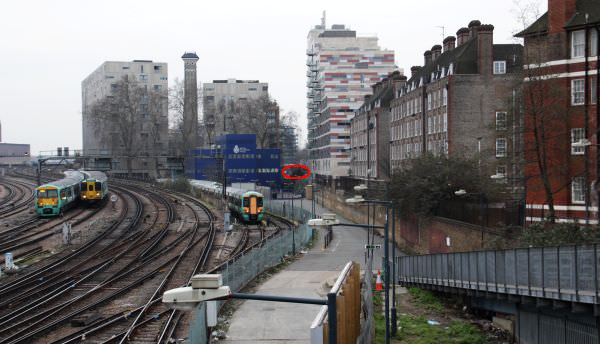 A view from Ebury Bridge. The long wall and flats on right mark the old canal route. The lock is circled in red 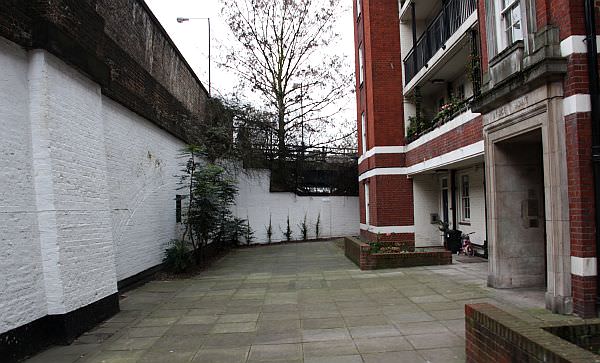 The former canal alignment at Bridge House by Ebury Bridge Road. The old canal arch can just be seen at left 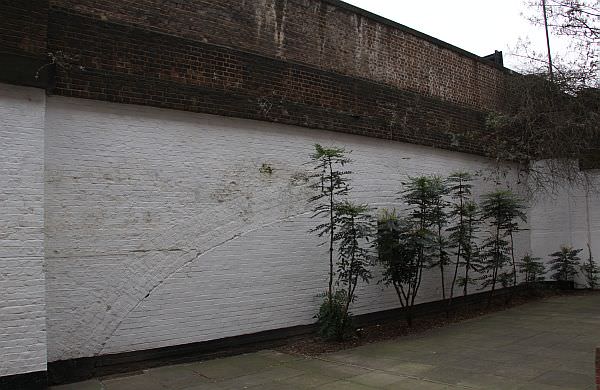 Boats once passed through here! The old canal arch underneath Ebury Bridge, Victoria
The first bridge over the canal was at this point and was known confusingly as Chelsea Bridge. No doubt the name was changed later to prevent confusion with the other, more famous, Chelsea Bridge nearby! 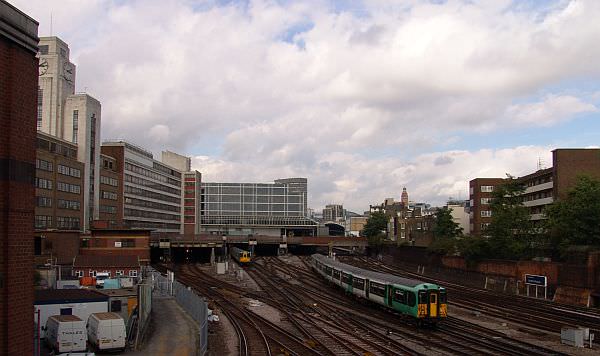 On the far side of Ebury Bridge is this view of the Victoria Station environs
The canal continued as far as the north side of Ebury Bridge until 1928. The terminus basin up to that time was on the land in the foreground (seen in the above picture where the vans are parked.) In its earliest days this area was known as Stone Wharf.
No further trace of the canal remains beyond this point however when originally built it passed through the site of platforms 15-19 and reached almost as a far as the present Victoria bus terminus. The canal terminus was known as Pimlico Wharf, where the bus station now stands. There was a large basin. Most of the west side of Victoria station is built upon the old canal basin 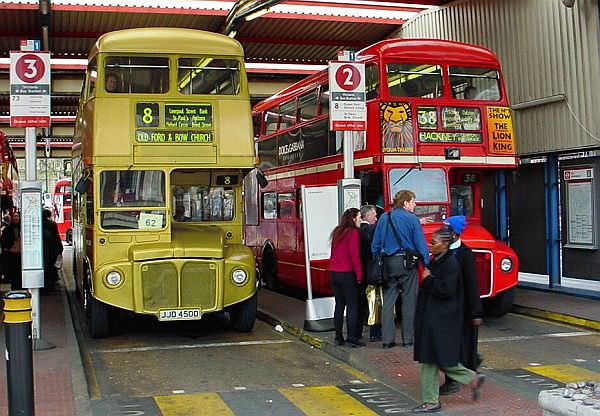 Another scene now part of history. RML 2450 (BW) in LT’s Jubillee colours, 2002. CT’s RM 1725 is at right
The scene above shows two of the iconic Southall built RM buses shows the old Victoria bus terminus. This large roofed terminus was built upon the site of Pimlico Wharf. This was once the terminus of the Grosvenor Canal! Just think, barges from the River Thames could be seen where buses now are!
The area prior to the building of the station was known as Pimlico. The new railway terminus was named Victoria after the the country’s popular and much loved monarch of the time. Pimlico nowadays denotes the area on the south eastern environs of Victoria Station.
The old Victoria bus station was swept away for a more modern terminus. This new development is alas open to the elements and is not really so much of an improvement over the old one.

One thought on “The Grosvenor Canal”