The streets of Hayes #2

This section is entirely on street walking and very little is to be seen of the former feeder. However its route can be reasonably traced all the way to the Paddington Arm at Hayes Gate. Despite not being able to closely follow the alignment through the various housing areas, it is possible to see the route fully by using Google’s aerial pictures 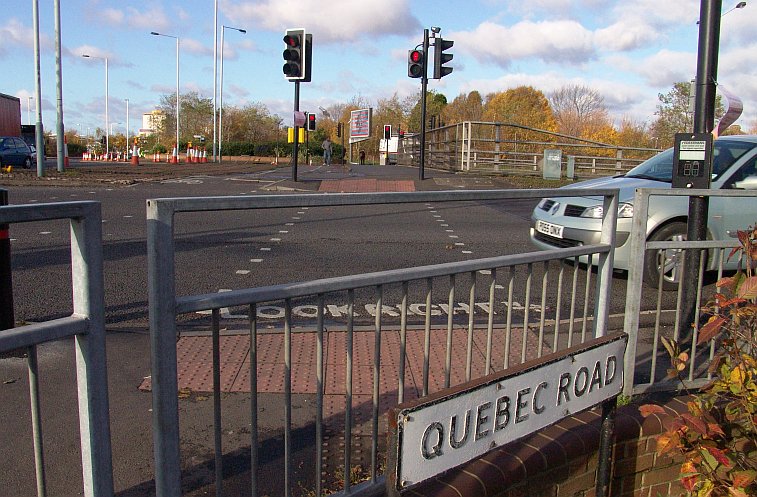 View looking west from Quebec Road along the footway across the Ossie Garvin intersection at the Hayes By Pass. This is the pedestrian route which continues the route between the truncated portions of Dorchester Waye

The junction of Quebec Road and Dorchester Waye. There is a passageway at the side of the house which one should walk a short distance along to see the continuation of the Ruislip feeder route 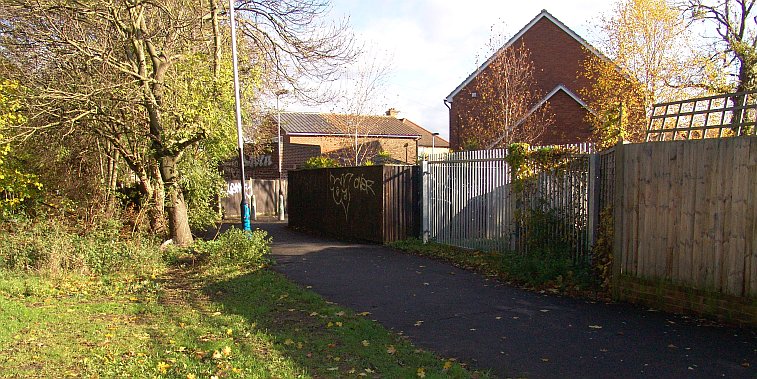 The railings at the side give access to the back access road that runs parallel between Dorchester Waye and Minterne Waye. This access road is actually the former route of the feeder. If one looks over the fencing on the west side across the by-pass, the houses on the other section of Dorchester Waye can be seen 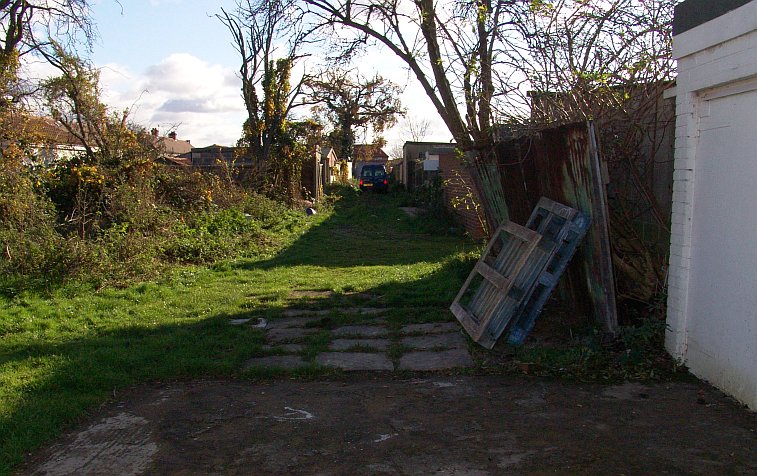 There is a ungated access point in Dorchester Waye and one can obtain a view looking in either direction along the former feeder route. This view looks eastwards

Dorchester Waye
Continune walking along Dorchester Waye to the junction with Brookside Close. At the junction itself there is some slight traces. The alignment of the houses on the west side of Dorchester Waye/Brookside Close give a clue to the alignment of the feeder. On the east side is an access road to allotments that are sited between Camden Avenue and Cerne Close. Look throught he railings to the south side of the allotment access road and a shallow depression, the feeder itself, can be seen. Clearly further along the feeder is filled in where it meets the allotments access road 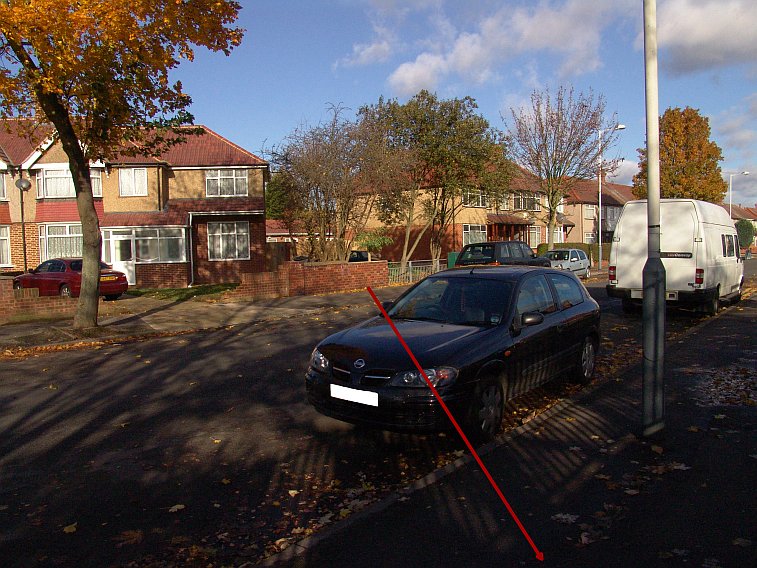 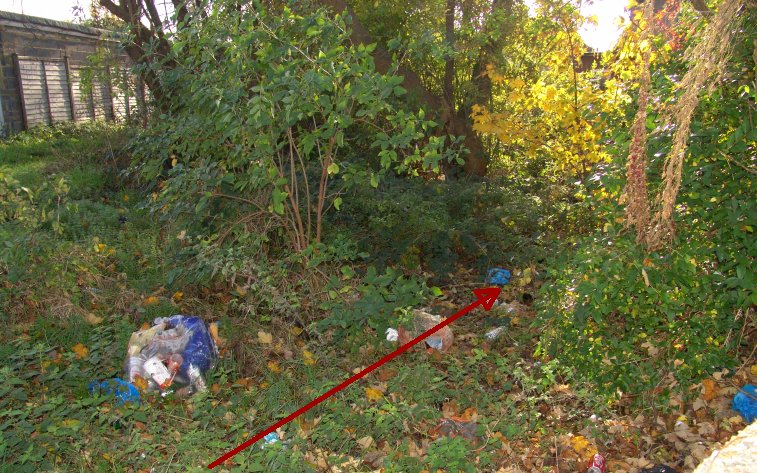 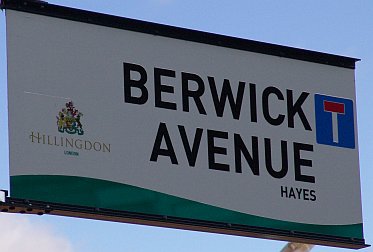 Take the route northwards to Berwick Avenue and walk along this road eastwards. At the far end is an access point and a bridge across the Yeading Brook. Unfortunately its not possible to see the location of the former aqueduct that stood to the south which carried the feeder on its way to the Grand Union Canal nearby 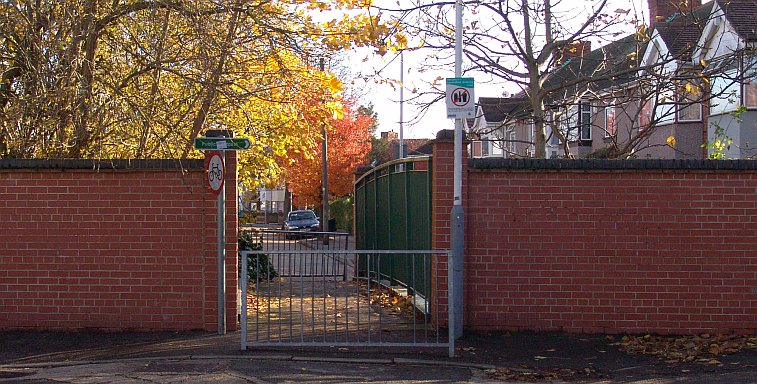 The access point at the east end of Berwick Avenue 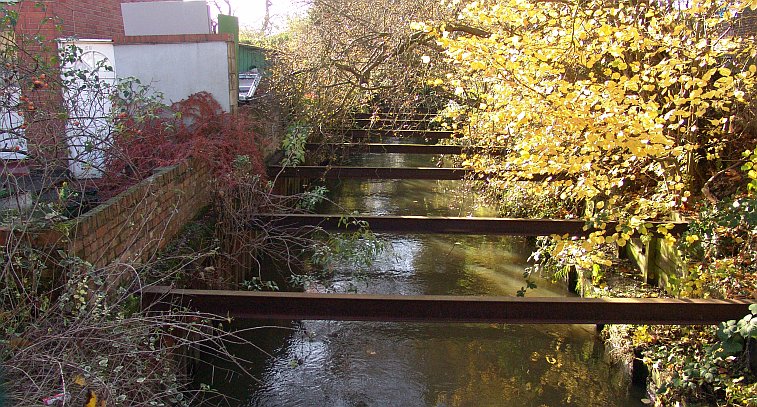 The Yeading Brook at Berwick Avenue

From the Yeading Brook crossing take a right turn into Delamere Road and head south. There is a lorry parking lot and a steelyard along here which are sited on the alignment of a former access road. Despite appearances this is not the feeder route at all but that of an old path, which is marked on some maps. The actual alignment is sited at Tollgate Drive a bit further south. Its difficult to picture the feeder as having run across Delamere Road at this point, but one has to take into consideration that land levels have been altered and Tollgate Drive has been built with a curve in it, which makes any envisaging of the former feeder route difficult

This view looks west along Tollgate Drive to Delamere Road. This house in Delamere Road is clearly new, compared to the 1920’s and 1930’s housing on either side. It has been built on the feeder route. The red line indicates the alignment and direction of flow to the canal 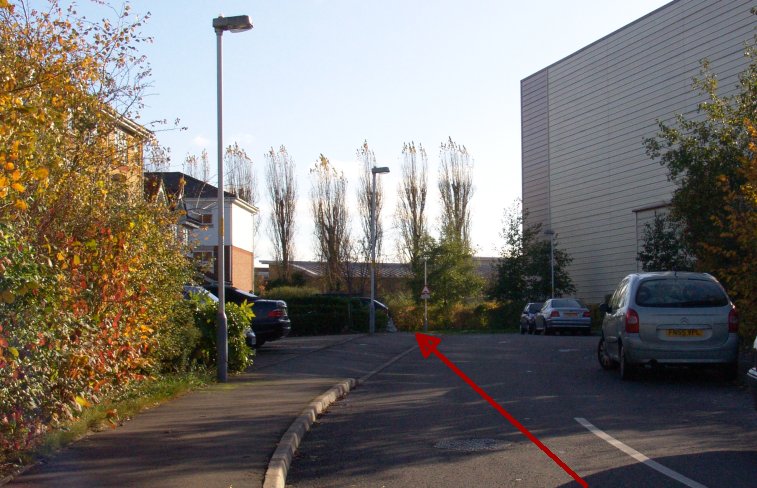 Further along Tollgate Road steers south of the feeder alignment for a short distance, and the pavement marks the route opposite the Shurgard Self Storage building. In the distance is the Grand Union Canal 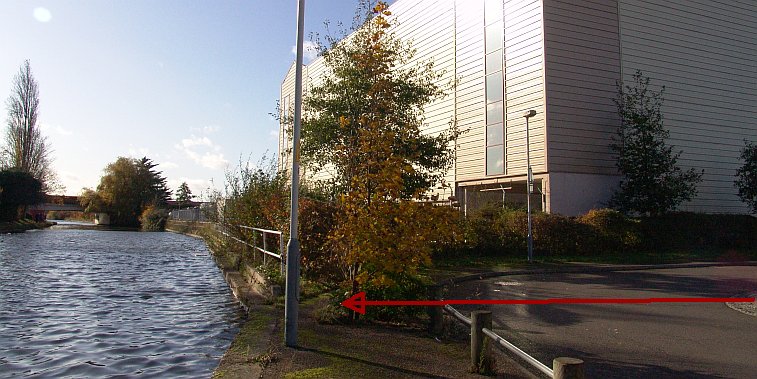 There is no trace of the feeder’s entry into the canal at Hayes Gate, by the Shurgard storage facility, other than this kink in the canal’s edge. It is possible the intake was obliterated by post-war improvement works conducted by the Grand Union Canal Company as this is one of the few locations along the Paddington Arm that was affected by those works. (These works are not to be confused with the more well-known and very extensive 1930’s works that stretched all the way to Birmingham) In the distance is Hayes bridge, which is the first road crossing from, or the last towards, Bulls Bridge
This map from the 1940’s clearly shows the actual course of the feeder through the streets of Yeading and Hayes, with the aqueduct over the Yeading Brook. Only a few streets have been built, and at least one, Warren Road is no longer there, this now being the route of the Hayes By-Pass 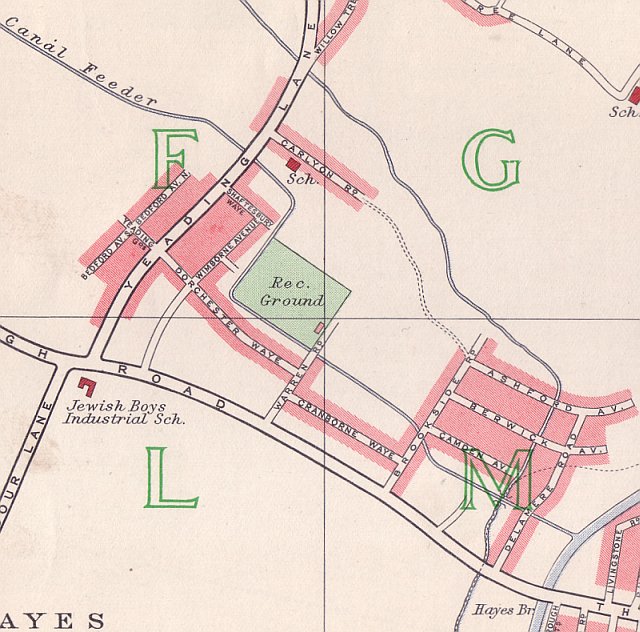 One thought on “The Grand Junction Canal Feeder from Ruislip #9” 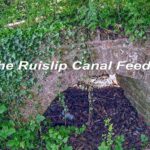