There is a myth about the Croydon Canal which is quite wrong. It is asserted that the only remains of the canal are at Betts Park, further south near Anerley, where it is often cited that the Betts Park section “is the only surviving part of what used to be the Croydon Canal” and thats not quite the case!
This excellent stretch of canal at Dacres Wood is never mentioned in most literature, all the more surprising since the section at Betts Park is just a concrete monstrotity designed to ‘improve’ the stretch of waterway there. Dacres Wood is the canal route istelf, still in water, although much stilted up, and the channel profile modified now forming a nature reserve 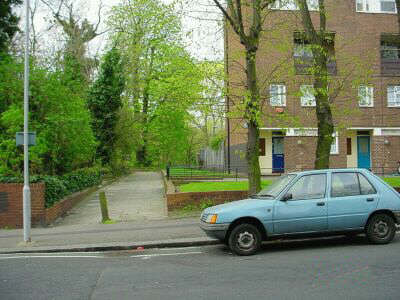 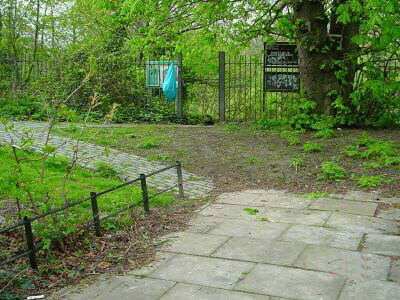 Just off Dacres Road, by some flats opposite the junction with Dacres Road this access path leads to Dacres Wood nature reserve (and of course, the Croydon Canal.) It is a surprise to actually be able to see a real stretch of canal at last. This is the view (below) as one passes through the gates of Dacres Wood nature reserve and the path slopes down towards the canal itself. Despite information boards, not one word is uttered that this is the Croydon Canal. However, Lewisham Council does have a website that tells us this is the former canal. It explains that the former canal “became the garden of a Victorian house called Irongates; this was one of a pair, the other called Thriffwood. By 1895, the grounds of both houses were wooded, with a belt of trees separating the two gardens.” In 1952 Thriffwood was demolished, and a block of flats, Homefield House, was built on the site of Irongates in 1962. Originally earmarked for housing, it was not realised that this was the Croydon until the council did a little bit of research in 1989, and redug out the canal in 1990 to its original width to create an attractive wetland 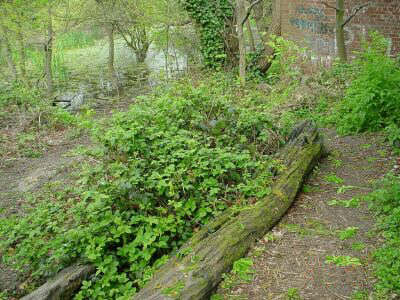 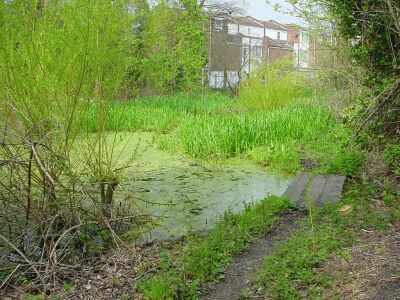 Two more views of the Dacres Wood section. The houses in the background are on Catling Close, and the landing stage (below) lies at the other extent of the canal. As its now a nature reserve the landing stage really serves to give closer interaction with the aquatic life that can be found in the canal – some of which may be descendants of those which lived in the orignal canal! A footpath cuts the route and a look over the fence along this footpath reveals houses which can be seen in the next section: Thriffwood to Venner Road.