Kings Cross Bridge – old street name sign on the side of the Scala entertainment centre. This sign can be seen from Kings Cross station (see below) 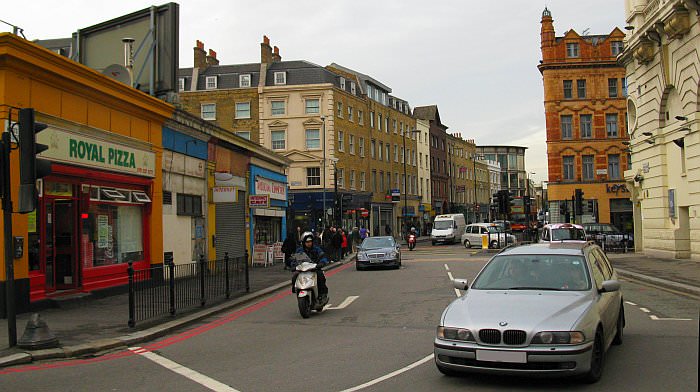 A general view of Kings Cross Bridge. The Scala is on the right. There is still a ‘bridge’ here, it crosses the Metropolitan/Circle/Hammersmith lines. The Fleet River would have flowed from left to right on its way from Hampstead to Blackfriars. The Scala is sited on what would possibly have been a wharf for boats at the head of navigation on the river prior to the 14th century. Kings Cross still sees boats – on the Regents Canal just a short distance to the north

Kings Cross Bridge/St Chads Well (at centre) in the early 19th Century. Pentonville Road at top and Grays Inn Road left bottom
The head of navigation on the Fleet River was generally thought to be at Kings Cross Bridge, although there is some slight evidence that boats reached Kentish Town. Kings Cross Bridge is actually a very short street bang in the middle of the bustling Kings Cross area between Pentonville Road and Grays Inn Road, and it was once ths site of St Chad’s Well. The Scala forms most of the eastern side of Kings Cross Bridge whilst a few shops form the western side. As the name denotes, there was once a bridge here (under which the Fleet River flowed) but now its tube trains that pass underneath. Boats can still be seen at Kings Cross bridge in the form of tourist signs indicating the pedestrian route to the nearby London Canal Museum.

Map of Kings Cross area showing the approximate Fleet River (red) and Fleet Sewer (blue) routes. Pentonville Road runs along top
Some recent research by the excellent John Doe on the history of Baggnige Wells suggests that the Fleet Sewer does actually go the other side of the Metropolitan Railway, underneath Kings Cross Road and then and crosses back over the railway at Frederick Street. This is of great interest, however the reason I said the Fleet went via Grays Inn Road towards Cubitt Street is because I have seen documents by Camden Council that show this. I assumed the main flow of the Fleet went via Grays Inn Road and under Swinton/Acton Streets towards Cubitt Street. I have never seen any evidence that proves the main Fleet sewer crosses the Metropolitan underneath Kings Cross bridge but I do know that drainage tunnels were built along the Metropolitan line.
Update: I have seen documents which show a partial delay to the Metropolitan Railway’s construction was the building of the pipe to carry the Fleet over the railway at Frederick Street. It seems then there are two routes the Fleet sewer follows between King’s Cross and Frederick Street.
As the above map shows, from Kings Cross station going in the direction of flow towards the Thames, the Fleet River headed along the south side Grays Inn Road for the short distance to Kings Cross Bridge. It flowed into St Chad’s Well and then onto the alignment along Kings Cross Road. The Fleet Sewer passes directly down Grays Inn Road. 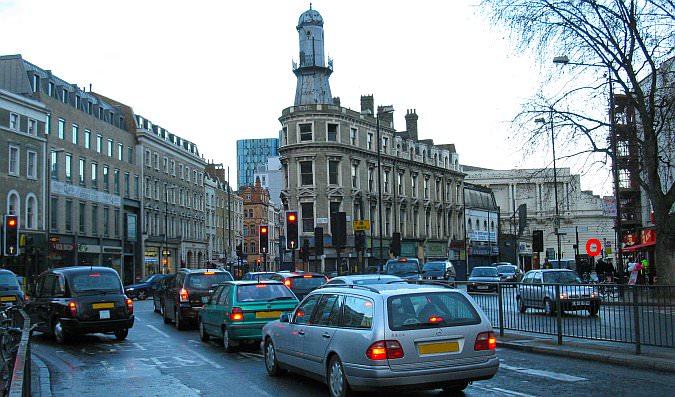 The roads outside Kings Cross station with the ‘lighthouse’ prominent. The red circle on the right marks the street sign (Kings Cross Bridge) shown earlier. The Fleet River heads more or less diagonally across the picture from the red circle to the foreground where the silver and turquoise cars are waiting for the traffic lights. The Fleet then headed down Euston Road (in front of the station) and then enters a cast iron conduit to cross the Metropolitan Railway tunnels 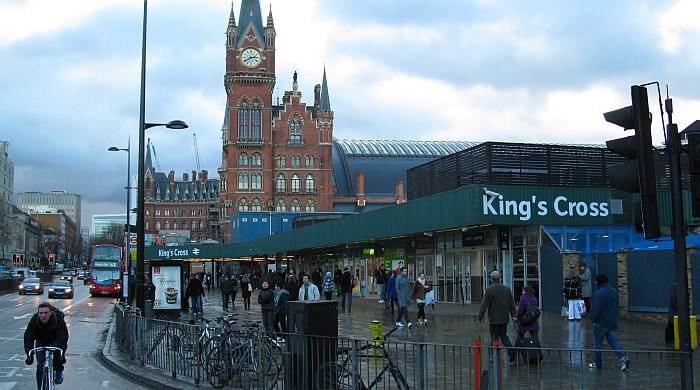 The Fleet (in its conduit/sewer) runs underneath the Kings Cross forecourt (the wide pavement on the right) and somehow squeezes past the new tube station ticket office extension and the foot of St Pancras station. Building the new ticket office area was clearly a headache because of the Fleet sewer! Many people using the crossing over York Way from Pentonville Road and past Kings Cross station do not know they are walking above the course of one of London’s most important rivers!

As mentioned on the previous page, in brief, the Fleet uses a cast iron aqueduct which crosses the Metropolitan Railway tunnels. The river then follows an alignment underneath the ticket office at Kings Cross mainline rail station. The rebuilding of the Kings Cross main tube ticket hall a few years ago meant the Fleet had to be diverted in order to provide space for the ticket hall to be extended considerably. In 2004, during the works for the new station box designed to place the Fleet sewer on a new alignment, the carrying of the excess from the adjoining Midland Road sewer into the Fleet sewer failed, and as a result the Thameslink tunnels were flooded. News report here.
In more detail, the Fleet River saw a number of changes in the Kings Cross area. The Fleet river’s sewer runs approximately along the route of what is/was known as the Hotel Curve. This is a disused railway tunnel from Kings Cross Bridge to the north end of Kings Cross Station. The tunnel was used for surburban services from Hertford/Welwyn to Moorgate until the 1970’s. Basically the Fleet runs along the west side of the Great Northern Hotel. The Great Northern Hotel’s curved structure reflects the alignment of the Hotel Curve tunnel. Prior to the building of Kings Cross station and its curved hotel, the Fleet followed what was known as Kings Road.
When Kings Cross main station was opened in the 1852, the Fleet’s route was changed to go via the front of the station (this explains why the station frontage is at an angle to the Euston Road and not parallel with it) and then north along the Hotel Curve alignment. It was further changed when the Metropolitan railway was built in the 1860’s. It was moved to the north of the new underground railway line. When St Pancras was built in the 1860’s, further changes were made which involved the Fleet being modified to accomodate the foundations for new Midland Railway’s station. This was one of the first jobs that had to be done in early 1866, before much of the main station works could begin. The drawing shown below illustrates this. 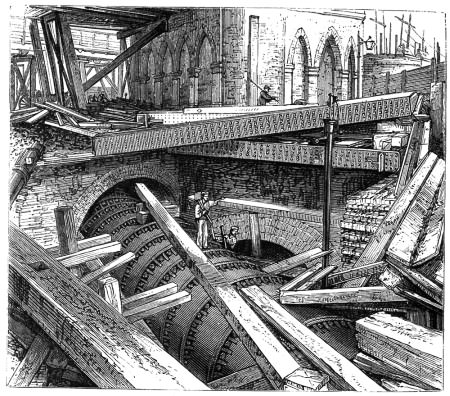 The Fleet in its cast iron conduit during construction of St Pancras. Copyright has expired according to Wikkipedia
A drawing (shown above) in the book by FS Williams – The Midland Railway: Its Rise and Progress (1874) regarding the construction of St. Pancras station show the curved cast iron conduit built to carry the Fleet round from Euston Road towards Pancras Road. Since 2004 the Fleet has been diverted once again, this time to accomodate the new station box that forms the new extended Kings Cross/St. Pancras ticket halls for London Underground. The Fleet Sewer affected the works for the new subway, which opened in September 2004, linking the Great Northern Hotel and the main tube station. The crown of the Fleet Sewer had to be modified in order to permit this subway to be built. 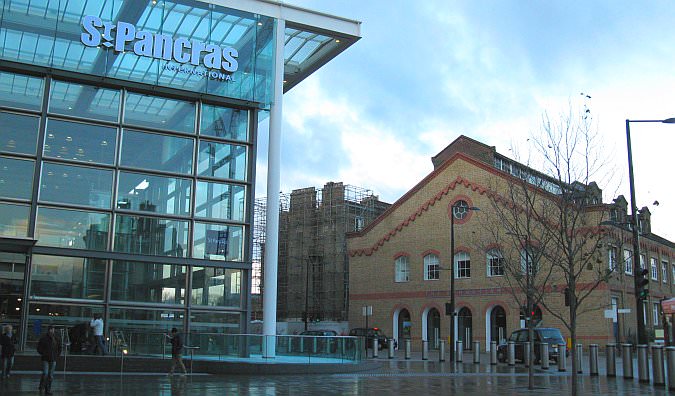 The northern entrance to St Pancras International. The river runs beneath the paved forecourt
Beyond the junction with Wellers Court (this road doesnt exist now but it ran alongside the south of the German Gym until recently) the Fleet Sewer’s route was modified to take in a new alignment westwards to Brill Place, and then to a point on Pancras way 35 metres south of Chenies Place. This work was done as part of the International Terminal works, as the old alignment clearly affected foundation strenghtening works to convert the classic St Pancras station for its new role. The Thameslink tunnels had to be modified to allow the Fleet to take a new route over them. The engineers were given a posession time of 51 hours to execute and complete the work of modyfying the train tunnels crown and creating a new channel for the Fleet. Ingenious planning and skill meant that the works were done in just 37 hours!
This picture shows the Fleet River (aka the Fleet Sewer) at Kings Cross. This section is part of the modernisation works involving the whole Kings Cross/St.Pancras transport interchange.

The famous writer/feminist, Mary Wollstonecraft (A Vindication of the Rights of Woman) is buried in St Pancras cemetery. At the time of her death in 1797, the burial would have taken place on the banks that sloped down to the Fleet River. Nowadays its Pancras Road, a very busy thoroughfare between Kings Cross and Camden. 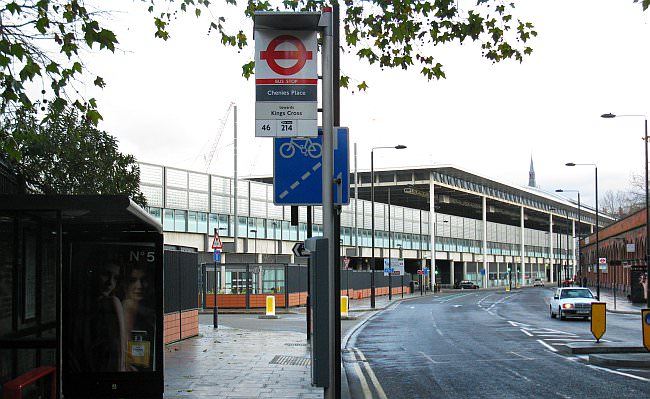 The Fleet’s route past the cemetery at the foot of St Pancras church. The International station can be seen in this view looking south east 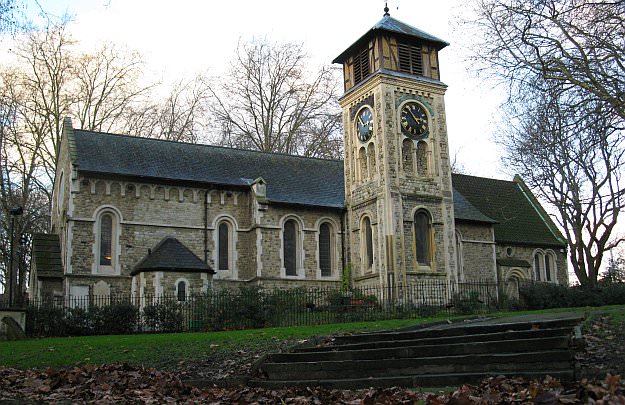 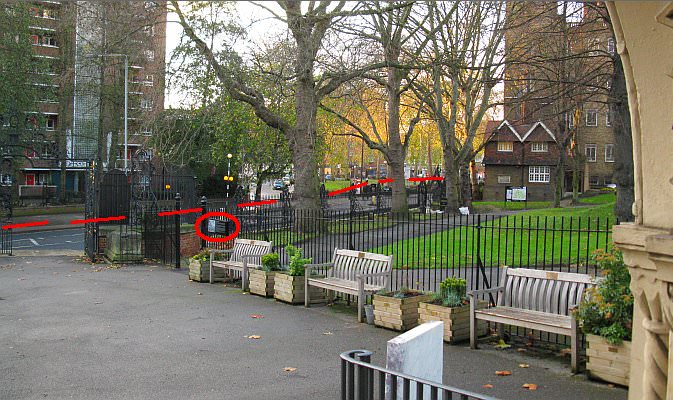 Looking from the front porch of St Pancras church towards the course of the Fleet River as it heads towards Camden Town. The information board (circled) shows a picture of the Fleet in 1827 (see below)
For an image showing the Fleet River (aka Fleet Sewer) somewhere underground by St Pancras church see here
Having passed the church, the Fleet then ran about where the small gardens at Goldington Crescent are on the west side of Pancras Road. It then turned and passed under the junction with what is now Crowndale Road to run towards Camden, roughly paralleling the route of the Regents Canal as far as Camden Road. 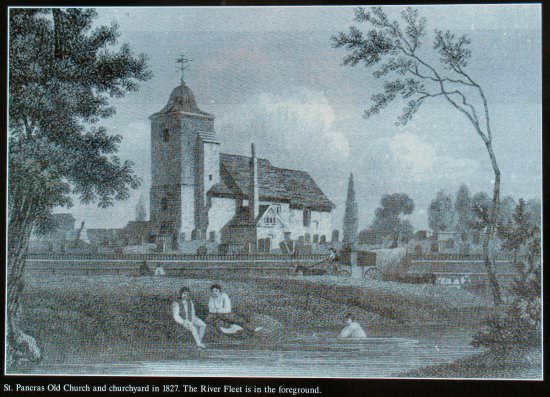