From its confluence at the Thames it is usually known as Barking Creek, a winding, tidal waterway. Once it reaches Barking it becomes the River Roding proper. This is one of west Essex’s more noted rivers and rises near Dunmow, before passing through the Roding villages, then Ongar, Abridge and Redbridge.
For around a century the river was easily navigable as far as Ilford bridge. Today it is only useable as far as Barking town wharf, and somewhat further north with great care on higher tides. Boats have made it to Ilford but it is not an easy task and the river from a point above the Fenchurch Street and District Lines crossing is now at best soley for the use of canoes.

History of the Roding Navigation

The Roding was once known as the River Hyle. From this it is that Ilefort, or the “ford on the River Hyle” became known as Ilford.
The marshlands below Barking have long been an area where flooding occured. Part of the land to the west of Barking were often below high water level and stringent measures had to be taken to keep the river contained. In the late 13th & early 14th Century, the landlowner, the Abess of Barking, often found the burden of maintaining the river banks costly and she had to seek tax relief from the governement in order to undertake her duties and prevent flooding of her lands. From the 16th Century commissions set up under the 1532 Statute of Sewers were responsible for the Barking Marshes, right up uno the 1930’s. Modern day flood defence is provided by the Barking Creek tidal barrier at the confluence with the Thames.
One of the earliest references to navigation on the Roding pertains to 1203, where two ships took on a cargo of bacon at Barking destined for Normandy. Timber (including that from the Abess of Baking’s forests) was a regular trade on the Roding and Barking Creek. From the 14th to the 19th Centuries one of the main industries on the river was fishing and Barking once hosted one of the country’s largest fishing fleets. Henry the Eighth had some of his splending Naval vessels fitted out or maintained at Barking.
In 1722 Daniel Defore reported that Barking was a busy little fishing port. From that time when there were just 14 smacks, the number grew to around 220 fishing smacks by 1850. Barking thus became one of the greatest fishing ports in England and no doubt the Roding Navigation benefitted from this. From the 1860’s the fishing fleet declined enormously. 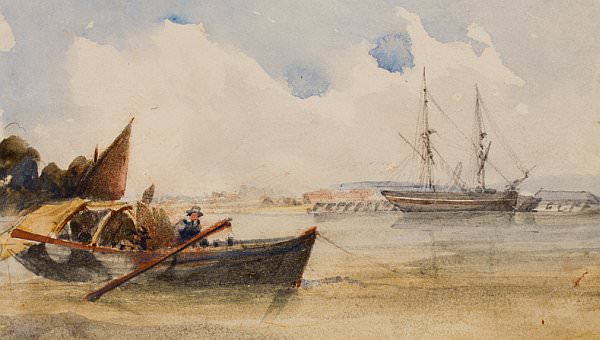 Barking Creek by Thomas Shotter-Boys, prob 1830s-40s
Thomas Shotter Boys (1803–1874) an English watercolour painter depicted a romantic view of Barking Creek, with a ship at berth and fishermen – a location somewhere near its confluence with the Thames, possibly 1830’s-40’s 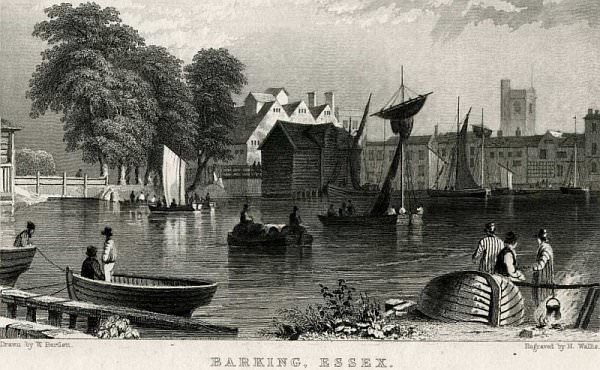 The busy Mill Pool and wharfage area at Barking in the early 1800s (from Wikipedia)
In terms of boats reaching Ilford, the 1737 the Roding Navigation Act was promoted for this purpose. It was said this improvement would be “very convenient for the carriage of corn, coals and other foods and merchandises to and from Great Ilford…” The navigation was a great success and Ilford Wharf became a thriving place.
In order to facillitate the navigation to Ilford, some improvements were made to the river. These included a huge weir just to the south of the railway bridges (the excess found its way into Barking Creek via Back River/Hand Trough Creek.) Tidal gates (known as ‘Six Gates’ were built near Barking Mill to maintain levels to Ilford. The tidal gates were also used as a flash lock. 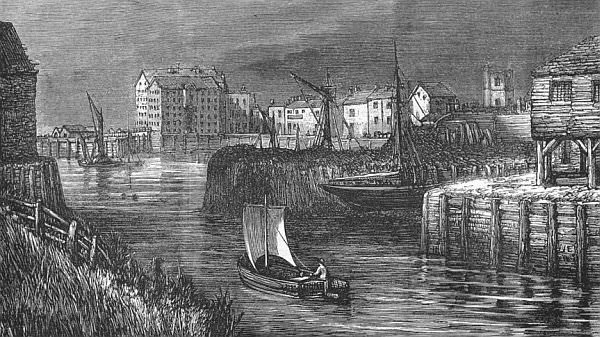 Few pictures (the above an exception) depict the gates at start of the Ilford navigation
The navigation proper began by the Granary on Barking High Bridge Road and headed northwards for just over a mile and a half to Ilford. Few alterations were made to the navigation during its life. However the construction of the London Tilbury and Southend Railway a short distance above the confluence with the back water saw an inclusion in the Eastern Counties Railway bill of 1847 that the navigable height under the new bridge must not be less than nine feet at ordinary high tide, whilst the width of the navigation was to be maintained at 30ft. 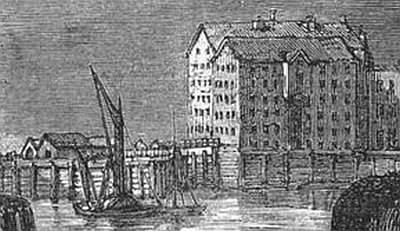 Crop of 1888 engraving showing the tidal gates (centre)
The present building at Barking Mill was built in around 1870. The original mill stood on the other side of the channel. It was demolished in 1922.
The Roding Navigation was a successful concern until around the 1920’s when traffic declined rapidly. Its not known when the last boat traded to Ilford but may have been in the 1930’s.
Since 1961 there has been a Barking and Ilford Navigation Company, which is still extant. Uncertain of its relationship to the present river as the waterway is managed by the EA. Searches on Google will reveal a number of websites detailing the 1961 navigation company. Currently it has £0 assets. 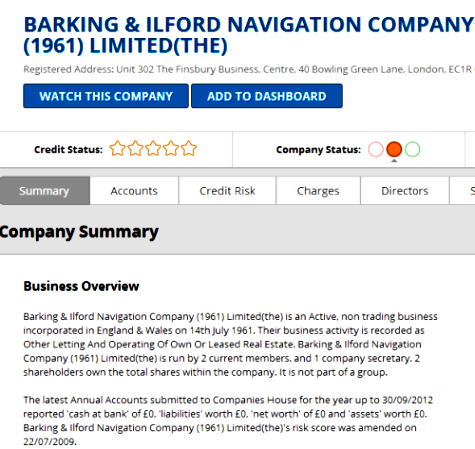 One of the more noted aspects involving the river at Barking was the bascule crossing and its tramway. This famous structure and its rudimentary transport system lasted just over a couple of decades from 1904 to 1929. Barking (or Beckton) Bascule bridge was built for the sole purpose of facilitating the small tramway system from Barking to the huge gas works at Beckton.

Barking bascule bridge
As the bridge opened vertically, there was no way to make the tramway overhead wiring continual across the bridge so all tram drivers had to approach the bridge at the best possible speed and then coast across whilst the conductor held the trolley pole down and re-connected it on the other side. The task was made all the more awkward by a sharp bend in the tramway on the Barking side, so some skill was neccessary to achieve the manouvre. It all failed it simply remained that the crew and passengers had to push their stricken tramcar onto the wired section of the tramway!
The Beckton tramway was one of the country’s smallest systems, not without its funnier moments. Upon completion of the system, the company realised they had not built a depot so one was hastilly built from corrugated sheets at the Beckton end. A temporary structure that lasted the entire life of the tramway!
Film addicts will of course know Beckton Gas Works is where Stanley Kubruick filmed his Vietnam war movie, Full Metal Jacket.

The Barking Barrage was enabled by an Order of 1995. This permitted the barrage to be built. The order came into force on 7th March 1995. This extended the navigable length of the Roding from High Bridge Road to just north of Hand Trough Creek. It has radial gates which can open only when the tidal water from the Thames is at a sufficent height.

Navigation on the Roding

The Roding was made navigable simply by the use of floodgates at High Bridge Road adjacent to the Granary in Barking. At medium to high tides the gates would have been open, and most other times shut, except for some periods when it could be used as a flash lock, thus extending the operating hours on the navigation. The main purpose of the gates was however to sustain water levels as far as Ilford.
It appears the floodgates existed at Barking until the mid sixties or soon after. This would have meant that technically working boats could have travelled to Ilford up to that point in time, though in practice the last workings were more likely to have been sometime before WWII. Evidence for this comes from OS maps of 1938 which show the winding point filled in and made level with the rest of the river.

The wharves at Ilford

These were sited on the river between the two settlements known as Great Ilford (the present Ilford) and Little Ilford (aka Manor Park)
Ilford Bridge once had wharves but few traces remain. There are slight indications on the west bank where development has not yet affected the area. The river has been slightly narrowed.
Roden Street (shown as Roding Street on old maps such as that below) was once known as Back Street. Another name for the Roding was of course Roden. 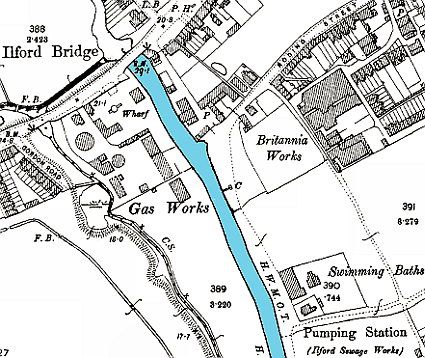 Ilford Bridge, 1896, showing wharves and barge turning place
Ilford bridge is said to have been a site in use since pre-historic times, no doubt due to the ford that once existed here. Uphall Camp was a Bronze Age settlement nearby bounded by a ditch. A brick arched bridge across the river was in existence by the early 1800’s.
Although the river was fairly narrow at Ilford, there was in fact a winding hole cut into the river bank and level with Back Street (Roding Street in the above mpa) which enabled larger vessels to turn. 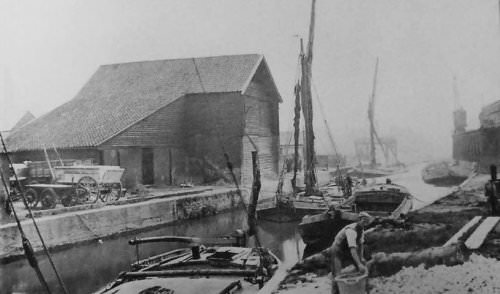 Wharves at Ilford Bridge (From Redbridge Library Archives)
Wharves at Ilford existed on both sides of the river. The west side eventually became known as Eastwood, a substantial wharf with gantry crane was the main feature.. This served the nearby gas works. On the opposite side nearest the bridge were warehouses from an unknown date, probably the early 19th Century.
To the south of this was a third wharf, with a crane. This served a brick works. It is said that excinct animal fossils were discovered during the construction of the brick works in the mid 19th Century. During excavations in 2010 a hoist wheel from the crane was found. Despite being offered to local museums, the 0.66m diameter wheel was not accepted and so discarded as scrap. 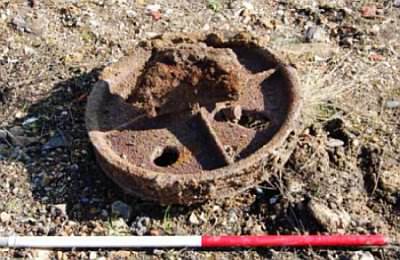 Part of the crane from the river’s working days
Ilford bridge was once an important link in transport – buses! Until the 1970’s all London Transport buses (red that is) stopped up on Ilford Hill near the police station (now demolished). All Green Line buses and national coach services (such as George Ewer/Grey Green and other Essex/Anglia services) had to make do with separate stopping points sited on Ilford Bridge some way from the town centre. At busy times queues of locals waited here patiently for their onwards transport to the Essex, Suffolk and Norfolk seaside resorts.
The Roding Part Two