The street layout of Norwood has its origins in the lengthy canal loop here. The village was built around the canal and the present arrangement reflects the canal route strongly 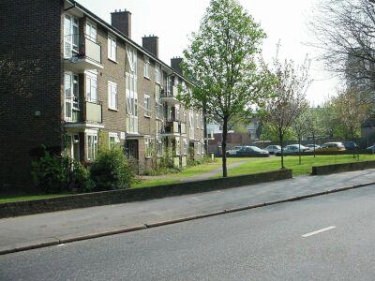 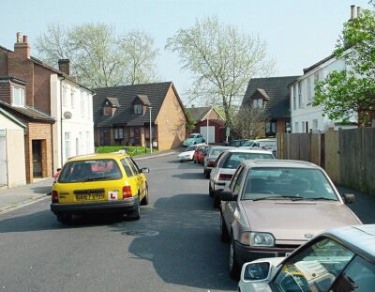 This is about the third lot of flats that we have seen built on or alongside the canal’s alignment. Whist there does not seem to be any reason that this block of flats on Penge Road should have to be built on the canal’s alignment, it is indeed and gives clues to the former canal route towards the circuitous Norwood loop. Having crossed Penge Road and passed along the block of flats, the route then crossed Kings Road (right) The block of flats are to the left, the canal passed left to right just by where these white cottages are. At the far end a row of modern cottages built on a former railway alignment that had once superseeded the canal.The view (below) looks along the former railway route towards Birkbeck – a spur that once linked Norwood/Beckenham Junctions. The Croydon canal passed right here, but its precise alignment is difficult to determine. However the canal route can be easily seen at several locations on the Norwood Loop 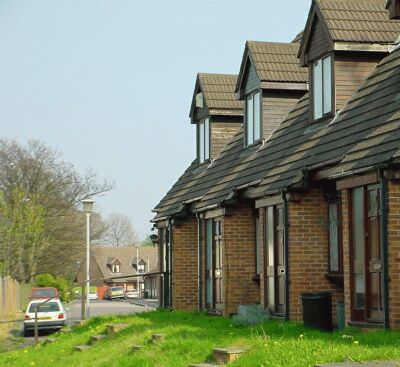 Logically the next step is South Norwood Lake to the north. It is reached from Penge Road, where a left turn leads into Lancaster Road and half a mile further on, the lake can be seen within South Norwood Park. The entrance is down Woodvale Avenue 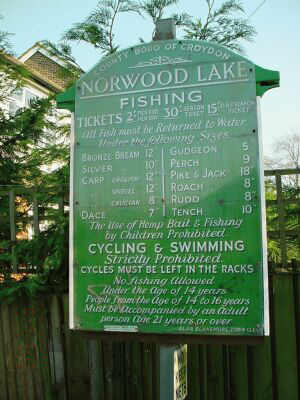 Above: This very old charges board was restored in the 1990’s. Below: The lake – the far side is bounded by the railway to Crystal Palace low level. To the left of the picture is a small island, which has been a part of the lake ever since the canal closed, and the lake turned over for recreational use. A coloured drawing, describing the lake at Knights Hill, Norwood, shows the island. Knights Hill is a short distance away and was the important road in the area long before the developments around the lake were even started

The lake was larger at one time towards the south west end, but a causeway has been built, making the lake a squarer shape. The feeder for the canal left at the far side of this picture to enter the canal roughly beyond where the Crystal Palace line now runs. Between Betts Park and Penge Road, there is absolutely no trace that can be seen from the train on the main or Crystal Palace lines

The canal loop through Norwood 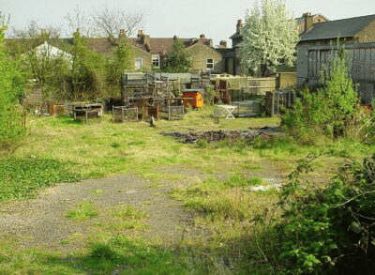 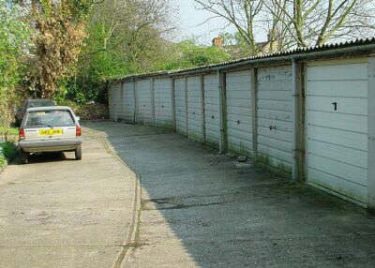 Off Sunny Bank is Regina Road, sweeping round in a loop that follows the canal alignment. Its construction seems hardly worthwhile now as a short cutting would have done better, but there are reasons that have got lost in the 200 years since. In order to see substantial remains of the canal itself, it is best to use Sunny Bank. Nos 12 -13 are old houses and an access road down the side of these lead to what is a factory (left) The land in front of the factory is strewn with pallets and boxes, piled where the canal itself once was. At the far end of Sunny Bank is a block of flats. Whilst these do not actually stand on the canal route itself, lock up garages at the rear lie on the canal alignment (right) This view looks towards Penge Road – behind the photographer is the route to Croydon 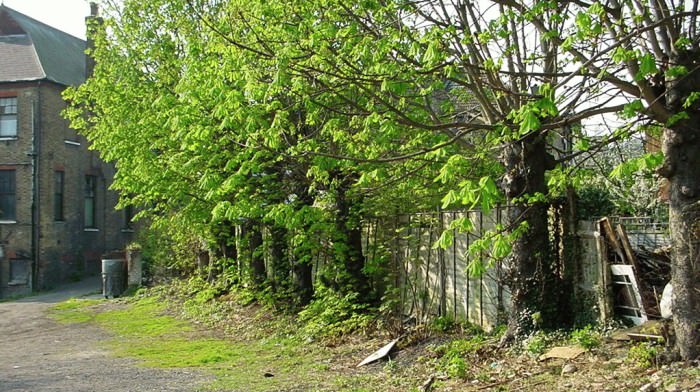 A parking lot by the Working Mens Club on Manor Road (a side passage leads from Sunny Bank, crossing the canal bed) has a line of trees on the north side. These stand on what was once the canal’s southern flank. The view above shows the line of trees, looking towards Manor Road. Just behind the line of trees are remains of the towpath itself, and taking a good look around here, one soon realises that they are looking at a remant of canal, dry and in use as gardens to the rear of properties in both Manor Road and Sunny Bank. Here is therefore a third important ‘surviving section’ of the Croydon canal. Betts Park – eat your hat! 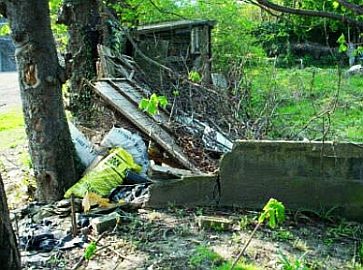 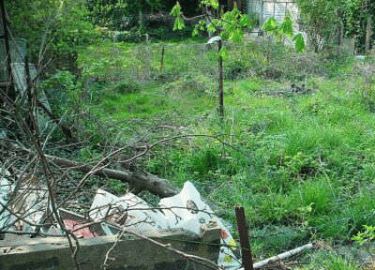 An unofficial access from Sunnybank accesses remains of the towpath bank itself (left) in which view we are looking along the former route southwards in the direction of Croydon. To the side (right) a substantial profile of the canal can be seen, in use as gardens, but some uncertainty about ownership appears to have left them rather open to access by members of the public. This stretch of canal was still watered in 1862, and according to the authors of ‘South Norwood and the Croydon Canal,’ the remnants of the canal finally succumbed to further house building by the end of the 19th Century.

Next: Norwood Junction where a swing bridge once existed.