The ‘Old Order’ in London

This page looks at some old London canal scenes. The Thames isnt actually a canal but the pics are of interest so they are included as it was an IWA cruise that was making its way to the National Waterways Rally in Osterley Park, near Brentford. 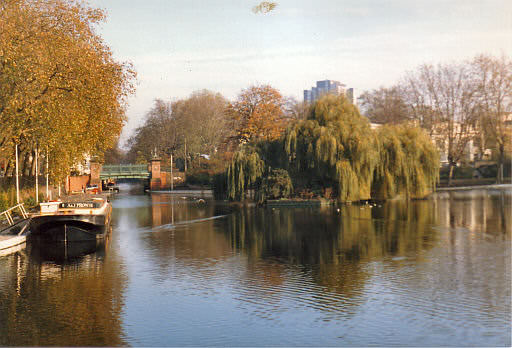 This scene from January 1985 shows Alex Prowse’s Barge Crook which was his art gallery for 23 years. The interest here is the simple gold lettering ‘A & J Prowse.’
The tower block visible in the distance was at this time still in its old guise, and considered quite an ugly blot on the landscape of Edgware Road. Nowadays its cladded in white with red stripey bars and this work has smartened the top end of Edgware Road. 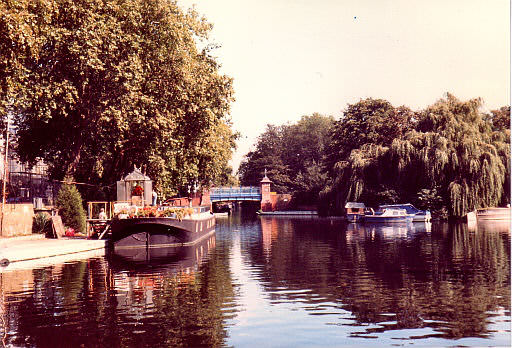 September 1987, and a greenhouse has been added to the top deck of Barge Crook. I think thats Alex by the steps talking to his wife Jan at the entrance to the greenhouse. Note the motely collection of cruisers moored at Browning’s Island 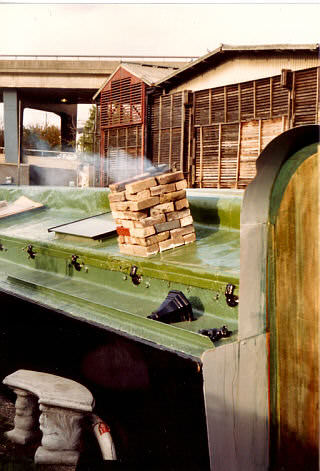 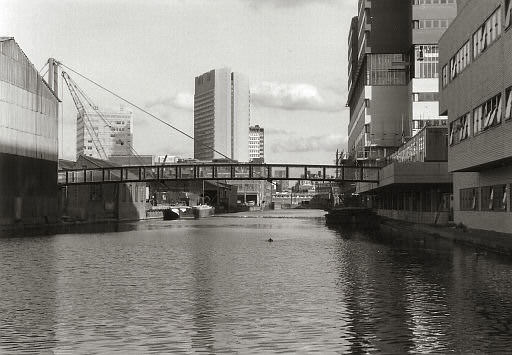 Paddington basin November 1986. A few barges moored up here out of use.
Note the large exapnse of waterspace. Compare this with the awful restricted waterspace in the equally awful ‘modern’ development known as Paddington Central/Merchant Square. There was always an assertion that a canal character would be retained as part of the new development, and despite plans showing this eventuality, nothing of the sort has happened, and the mostly ugly developments around Paddington Basin continunes to make an awful blot on this part of London. It is absolutely clear that the designers were just not modern enough, and neither considerably pragmatic or philosophical about their designs. No doubt in a few short years, the fantastic wind-tunnel that constitutes Paddington basin will be considered a major disaster both in terms of architectural and aesthetic achievement.
Like Canary Wharf there seems to be the idea that building tall structures around a rectangular basin somehow improves the outlook. Despite one or two ‘wow’ buildings that give the locale a boost, these are let down by other dire designs. Then designers start to faff about with the waterspace trying to make it look more proportional in order to enhacne the awfulness. Still doesnt work but the designers nevertheless carry on regardless building what are no less than monuments to their narrow aspirations. Many of the former docks and basins in London have suffered the same cruel deception, and the same can be said for many stretches along London’s canals and even those in other parts of the country. The clumsiness at Paddington is further greatly enhanced by useless gee-whizz bridges such as the Helix and the Rolling Bridges, great monuments to clever designs and wizardry but totally inept in terms of location and waterspace usage. 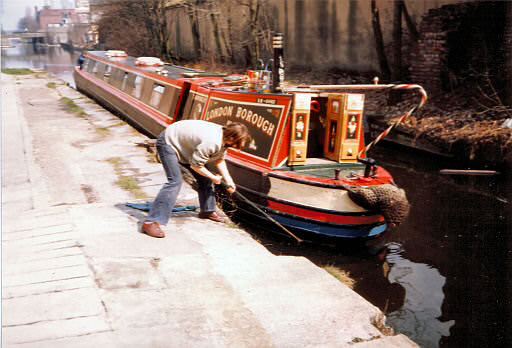 During the 1980’s and early 1990’s I often joined up with Kirk Martin as a volunteer to help out with the community trips up and down the Regents Canal. This view from April 1986 shows Kirk trying to remove some obstacle from the prop at the entrance to the Hertford Union canal 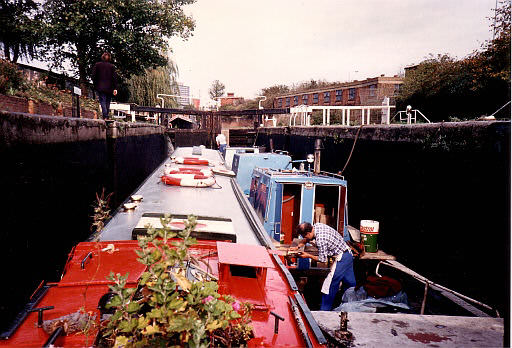 In October 1988 during a run from Battlebridge Basin to Litte Venice we were forced to stop in St Pancras lock and have a very early tea break. BWB were reparing the lock gates on site. After some wait BWB were able to let us continune through the lock. It was strange going up the lock with the staff continuing to to plane and ready large oak sections for the top gates 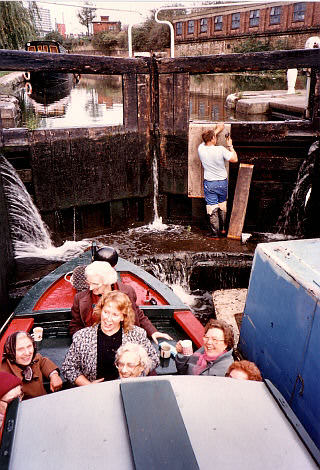 The boat guests having their early tea break while we wait for BW to finish those sections of oak gate protectors. As soon as we had left BW emptied the lock and carried on with their work. I dont think this kind of work would be allowed today given health and safety considerations etc 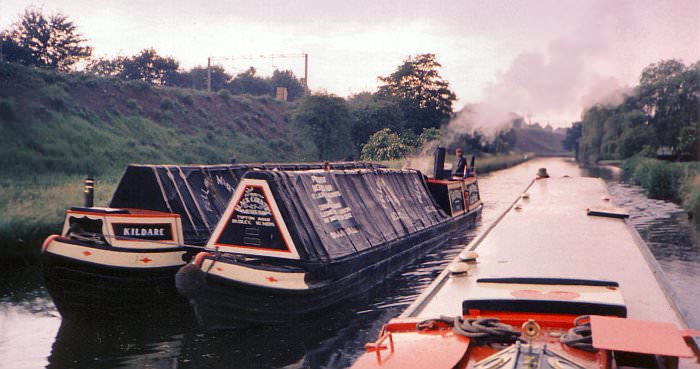 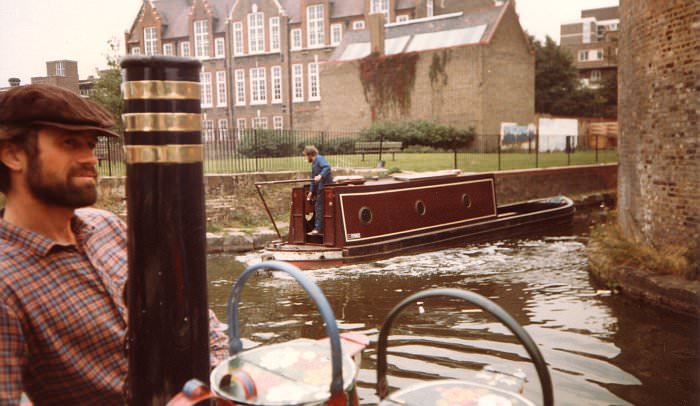 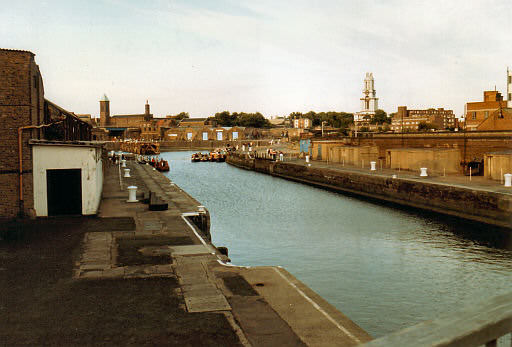 This is the old Limehouse ship lock in August 1986. This was the morning the large flotilla set out from here to Brentford where the National Waterways Rally of that year was taking place. The size of the old lock was immense compared to the tiny thing we now have! 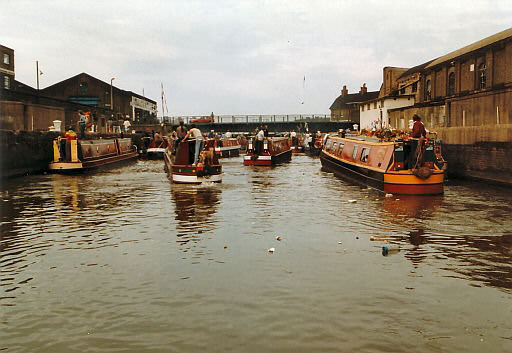 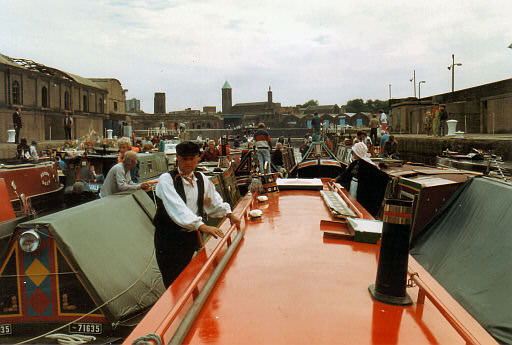 There must have been over 30 boats in the old ship lock! All squeezed in somehow. Aug 1986 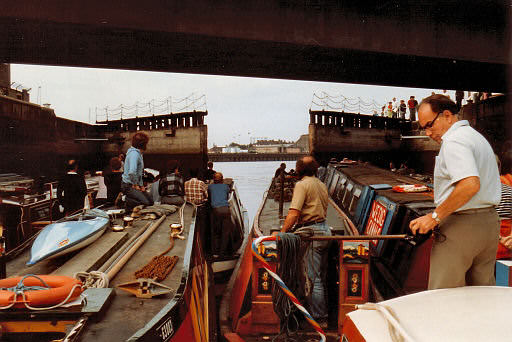 The gates open and we are out onto the Thames. A very calm river that day 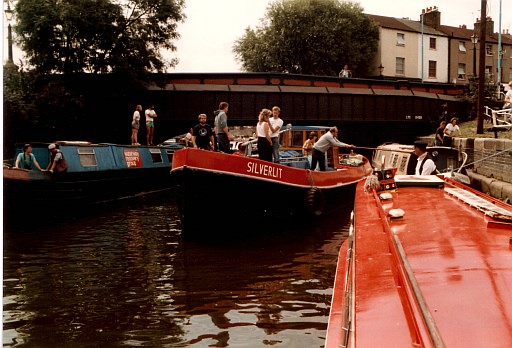 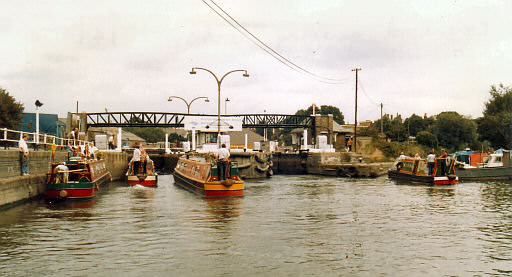 Looking towards the gauging locks at Brentford. Notice the boats moored up the River Brent to the right. BW would have a heart attack if anyone tried to moor up there these days as notices forbid it on the basis that there are underwater obstructions 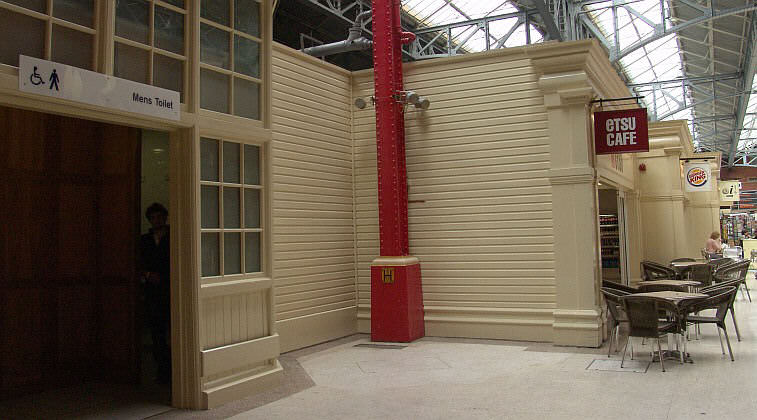 Location of the former entrance to ‘Melbury Land.’
Not an ‘archive’ picture in the usual way, but definitely an archival connection here! The new toilet block at Marylebone station is on a site that is connected to canal history. Some will of course remember this very site as being the entrance to ‘Melbury Land.’
What was it? Actually the old headquarters of British Waterways stood on this side of Marylebone where the stations extra platforms were never built. One had to enter the BWB’s headquarters via the station precinct and about where the red pillar is in the above picture, there were some short steps that led into Melbury House. As one entered the building, on the right was BWB’s main reception and information.

Marylebone Station. This is 1988 and the dear old departed BWB HQ, Melbury House can be seen! It was the tall office block. 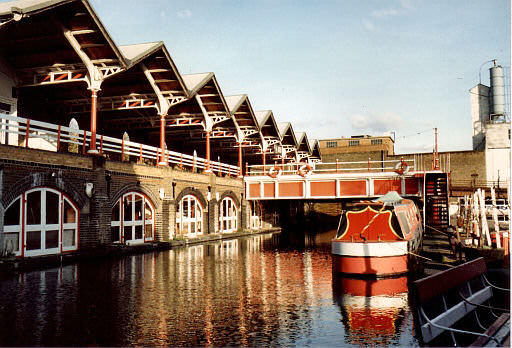 Portabella Dock when it was in use. Nov 1986
Portabella Dock is a great disapointment – one of those stretches of useful canal now turned over to non-usefulness. It now merely forms a water feature complete with idotic fountains. 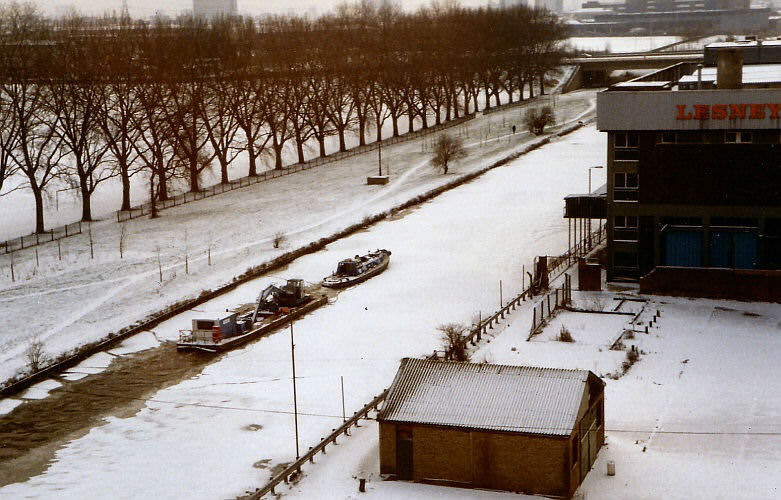 Lee Navigation at Hackney January 1987
Working on the top floor of Lesney’s factory in Homerton gave splendid views of the London skyline and the Lee Navigation. The picture shows BW workboats heading southwards through the ice. The other Lesney’s building is now history as new houses have graced the offside of the navigation for a number of years 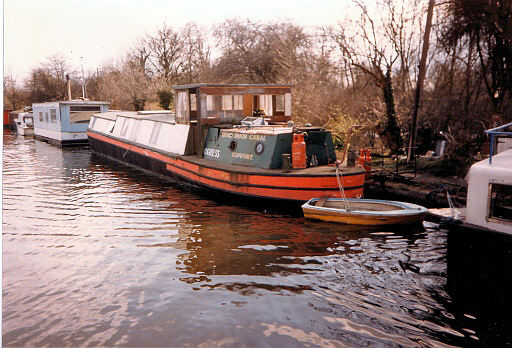 The Grand Union Canal Company’s barge ‘Progress.’ March 1987
Progress on her moorings at Cowley. She was the boat that opened the new Hatton Locks in 1934 and championed as the way forward for the then new Grand Union Canal Company. As it turns out she had to be taken by road to Hatton because the bridgeholes weren’t big enough for her to pass through! Progress is now lying on the Troy Arm in a somewhat precarious state. 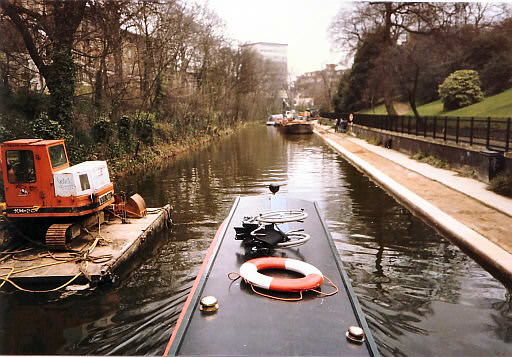 Regent’s Park works 1987
This picture has some history. During 1987 the towpath through Regents Park was dug up for new electricity cables. At the same time it was also improved and widened where needed. This view shows the new towpath with the cables in place underneath. A closer look at this picture will reveal the flats that formed part of a hostel (on the right with inthe trees) that used to overlook this section of canal in the park. These were demolished and the modern 1980’s/2000’s classical Nash style houses are now the main feature along this stretch 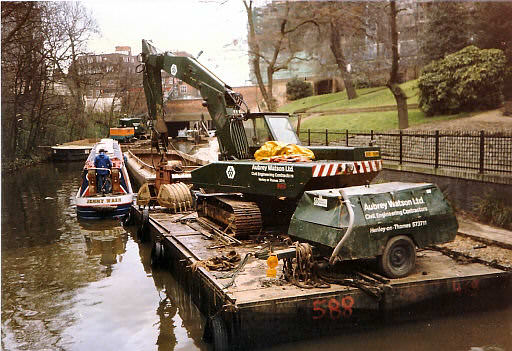 Regent’s Park works near Park Road. 1987
There was so much work going on that all the London trip boats (Jenny Wren, Jason, Tarporley, the London Waterbuses) all had to wait their turn to get through this work site! Waits were often up to half an hour as the barges had to be moved back to allow passage. Of course if work was underway then one had to wait until the piling had been driven in fully before the barges could even be moved.The steerer visible on Jenny Wren is NOT Marcus. He had not arrived on the scene at the time. It was only a number of years later that he began working with Walker’s on Jenny Wren and My Fair Lady 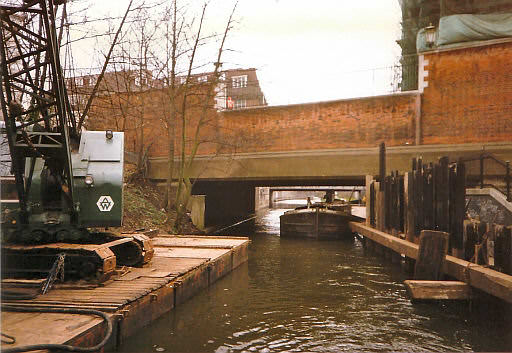 Major works on the Regent’s Canal at Park Road. 1987
The barge with the crane doing the pile driving moved out of the way to let Tarporley though on her return to Battlebridge Basin. It was still a tight squeeze though for full length boats passing this section 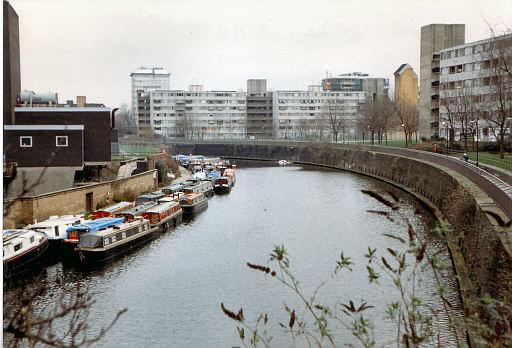 Just round the corner from Regents Park is Marylebone Wide in January 1988.This used to be a busy location on the canal with transhipment to the railway depot which was sited where the flats are on the right. Although all traces of this depot have been swept away, there’s still an overbridge on Lisson Grove and retaning walls along Penfold Street, Capland Street etc, and the remains of one of the gateways to the depot at Luton Street.
The moorings are mostly side-on, just a handful of end-on moorings in the distance. Today the number of end on moorings have greatly restricted the navigable width of the canal. The original intention was for moorings on either side of the canal but such plans were not implemented. The un-used, now crumbling, walkways built on the south side of the waterway are a tell-tale sign of this abortive scheme.