(The following section on the railway was kindly written for London Canals by Ian Bull of the Crossness Engines Trust)
The Royal Arsenal’s railways began in 1824 with a horse drawn plateway that was regarded as complete by 1840 when it had reached 15 miles in length. It’s likely that it’s design was based largely on that of the Surrey Iron Railway. The standard gauge system was opened in 1849 and was worked by the South Eastern Railway. In return for its construction the SER was allowed to use the Arsenal’s quays for commercial wharfage. This system employed a swing bridge over the RA’s canal, the second in the World after an example in Norwich over the Wensum.
The 18 inch gauge system was opened in 1871 and generally took over the standard gauge system’s duties except for heavy gun haulage. The SER ceased to be involved at this time. The 18″ gauge entered almost every building and served every workbench within them. Locomotive haulage within buildings was normal until closure. 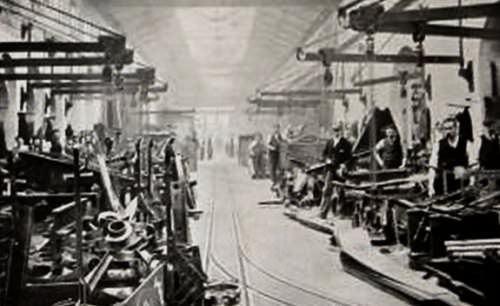 The 18 inch railway within the road carriage fitting workshops at Woolwich
In 1896 the RAR introduced the Worlds first compression ignition locomotives, the forerunners of all diesel locomotives. By 1898, in peacetime, the RAR’s narrow gauge was carrying 2,000 tons per day excluding coal. There were 700 wagons and 3,200 passenger miles per day were operated. These figures are far in excess of those on any British narrow gauge railway before or since.
The zenith came in the First World War when the Arsenal network reached 147 miles of line in its two square miles, the most complex and dense system in British railway history. Seventy miles were available to the 18″ operations and a considerable proportion of this were mixed gauge. During WW1 1,000,000 wagons were exchanged with the main line and 12,000,000 standard gauge wagon movements were recorded internally. Narrow gauge figures for wagon movements are not recorded but would be very much in excess of the standard gauge figure, possibly four times greater.
During WW1 the RAR worked an eight day week with most staff working overtime in excess of their 12 hour shifts. The locomotive department alone employed 633 men. The Arsenal operating some 50 standard gauge and 74 narrow gauge locomotives. Despite these figures the majority of the Arsenal’s output went by water transport. 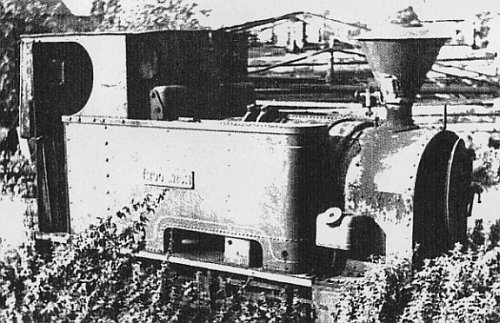 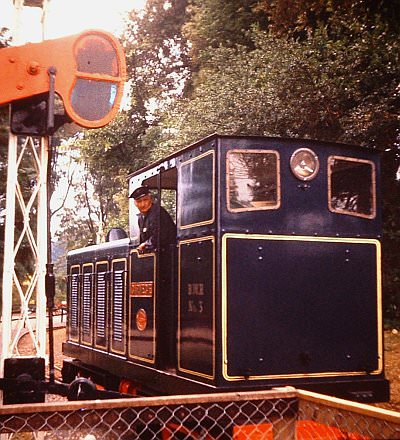 Carnegie at Bicton Woodland. One of several pics I took in 1977.
At the end of the Great War all but 16 of the narrow gauge locomotives were disposed of and 1934 saw the introduction of diesel power. By 1954 the only surviving narrow gauge steam locomotive, the ‘Woolwich’, was joined by ‘Carnegie’ a powerful articulated diesel which was the last new locomotive of any type supplied to the Royal Arsenal. ‘Woolwich’ departed in 1959 finding her way to the Bicton Woodland Railway in Devon where she was joined by ‘Carnegie’ in 1966. Railway operations ended in the Arsenal in 1971.
In 2000 the Bicton Woodland Railway sold ‘Woolwich’ and ‘Carnegie’ to a new museum of arms manufacture at the Waltham Abbey Royal Gunpowder Mills in Essex. In 2011 ‘Woolwich’ moved to Crossness pumping station for restoration to working order, adjacent to the Arsenal. Here she is within sight and sound of the lines she was built to work on in 1916. Her progress back to steam can be seen at The Railway Project 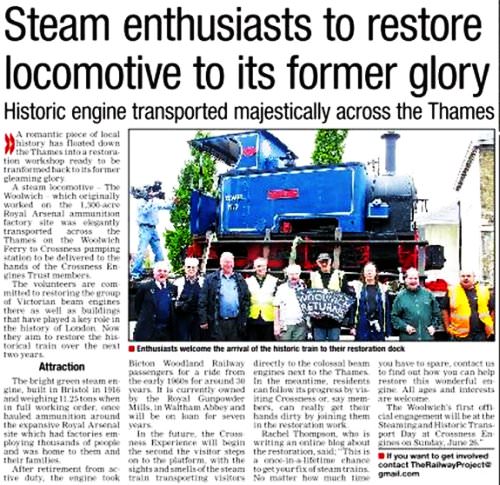 Some pictures of the Woolwich waterway

This section was compliled by courtesy of the Royal Arsenal Woolwich Historical Society (pics) and Crossness Engines Trust (text.) 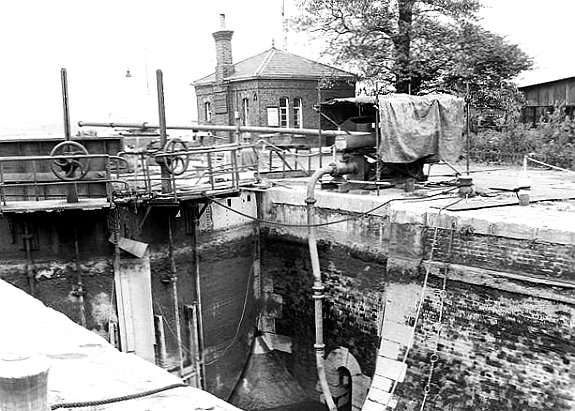 The entrance lock around 1971, after the canal closed. Credit: Royal Arsenal Woolwich Historical Society
The warehouses (shown below) were built in the 1930s. The canal was used by commercial craft well within living memory and was occasionally used for Torpedo testing! It once boasted three railway swing bridges besides the one surviving example at the entrance lock. 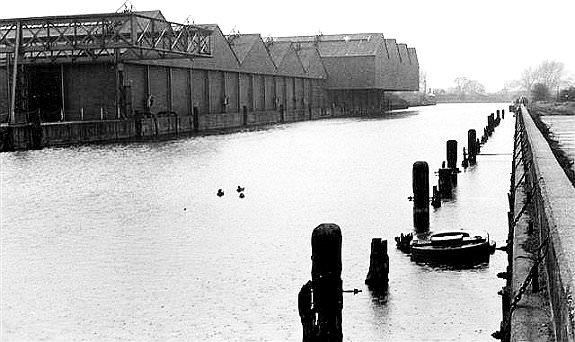 Woolwich Arsenal canal during 1950’s looking north. Credit: Royal Arsenal Woolwich Historical Society
Note: The Arsenal canal was truncated during the 1930s as explained elsewhere on these pages. The above picture therefore can be reliably assumed as being taken at the point where the canal was filled in to the south.
Next: A look at whats left of the Royal Arsenal Canal