Edgware Road is the oldest main throroughfare in London, At least 2,300 years ago it was a trackway through the Middlesex Forest. When the Romans invaded Britain, they created one of their major routes from this trackway – Watling Street. This began at Cannon Street and its route through present day W2 paralled the Titchbourne, a ditch along the west side. It was sometimes known as Aegceswer Road, being the original name for Edgware. In Elizabethean times Shakespeare is said to have been an actor at the Red Lion Inn sited where the Marylebone flyover is.

Tyburnia and the tree

Tyburnia was a area to the west of Edgware Road, near its junction with Bayswater. Its name derives from the Tyburn, one of London’s lost rivers. Probably the most famous aspect of Tyburnia was the Tyburn tree, where a gallows was sited and most of London’s criminals were hanged here. Perhaps the most famous person to be allegedly hung here, was Oliver Cromwell. In January 1661 his body was interred and hung posthumously. The last hangings there took place in 1783. Some dispute as to where the tree was sited exists, some think it was in Connaught Square. However a plaque set into the pavement on the island at the Marble Arch end of Edgware Road marks the most likely spot. Roque’s map of 1746 shows the exact location of the gallows, as well as the grounds to the south where deserting soldiers were shot, at what is now the Marble Arch

Roque’s map of 1746 with Tyburn gallows
(from Wikipedia)

The southern most point of Edgware Road at Marble Arch, showing the Tyburn Tree marker
There was a marker stone, this was from the Tyburn Gate, a toll house that stood at the spot a few centuries ago. It was seen on display in one of the Edgware Road shops some years ago as shown below. 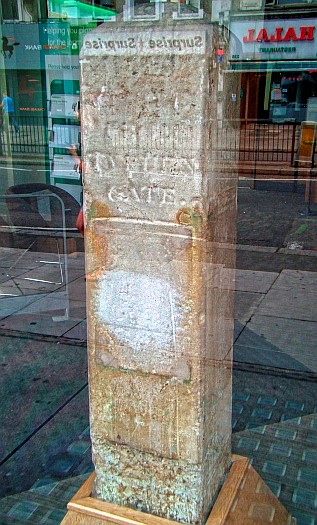 Towards the 19th Century

The recent era began with improvements in 1711 by the Edgware Road to Kilburn Trust, and just a century later Telford incorporated it as part of his London to Holyhead route (the A5.) One unique feature of Edgware Road was the houses and streets on the east side, with open country on the west side. Development of the west side didnt realy begin until after the opening of the Regents Canal. Arabic communities began arriving at Edgware Road in the late 19th Century
The year 1810 saw the first Indian restaurant opened. In 1851 the Marble Arch was erected at the southern end of Edgware Road. Originally it had fronted Buckingham Palace. Its designer was John Nash who built many villas around the Regents Canal. Many victorian houses were erected along both sides of Edgware Road during the 19th century, some of the most notable ones being sited in what is known as the Portman estate to the east, whilst squares and terraces were built up on the west side in Tyburnia and around nearby Paddington
The Great Western railway came to nearby Paddington in 1838, and later an extension, known as the Metropolitan Line opened in 1863, reached the City of London at Farringdon. As the worlds first underground railway, it proved to be a success. The first station out of Paddington towards the city was Edgware Road. This station still exists and today serves the Circle, District and Hammersmith lines. A second tube station is not far away, and opened in 1913. This is served by the Bakerloo Line. The rather unusual name came from the railway’s original title of Baker Street and Waterloo Railway

The main centre of Paddington, sited at the junction of Edgware and Harrow Roads, was ripped out by the construction new M40/Marylebone Flyover in the 1960’s, leaving the area without any definable centre of culture. A major casualty of this was the grandoise Metropolitan Theatre. The flyover is often called Edgware Road flyover in preference to its offical name, and all the London Buses use the unoffical name on their destination blinds

Plaque on the side of the Edgware Road flyover
The flyover has affected Edgware Road in many ways – the northern section from the flyover to Maida Vale has recieved less attention than the section south to Marble Arch. Edgware Road in W2 extends from Marble Arch to the Regents Canal at Little Venice by Aberdeen Place/Blomfield Road/Maida Vale. Edgware Road also passes the eastern extremity of Paddington Basin at Praed Street in W2.

Edgware Road (Bakerloo) station and the flyover looking south, this scene is a stone’s throw from the canal
According to the Serpentine Gallery’s Head of programmes, Edware Road is said to be “one of the most ethnically varied areas of the capital.” A large divesity of people live here and some of the poorest areas of Westminster are found in the area, on the north east side of Edgware Road in the Church Street area. Edgware Road is noted for its Arabic community. The first arabs moved to the area in the 19th century and they have been a feature of the locale for over 150 years. Many of the shops and restaurants reflect the cultural deights of the community and most of Edgware Road is open till the early hours

Edgware Road looking south from the junction at Old Marylebone Road/Sussex Gardens
The view above of Edgware Road by Sussex Gardens is just a couple of minutes from the canal! It comes as a surprise to many that Oxford Street is probably about 20-25 minutes walk from Paddington basin
Much of the area around the northern section of Edgware Road almost is an island! The canals forms almost three quarters of the boundary of the area – in most directions that one travels from the section of Edgware Road between Old Marlylebone Road and Blomfield Road, one is more than likely to cross a canal. The only other cities in England that have this intensity of various canal route crossings are Birmingham and Manchester

View of Edgware Road at Marble Arch. In the summer of 2009 the upturned horse’s head provided a new identitiy marker for Edgware Road
The 30ft high six-ton horse’s head was designed by Nic Fiddian-Green and originally meant to be a temporary feature for 28 days. It was unveiled on 18th June 2009 and has remained ever since. Horses seem to be quite a popular subject for architecture these days. There’s another horse sculpture nearby thats dedicated to the animals of World War 2, and many modern horse scupltures can be seen around the capital

The most popular are without a doubt the middle eastern restauarants. Other cultures manage to get a look-in too and there are Burmese, Italian, Chinese, Indian, Malaysian, Spanish Turkish and Persian – and a fish and chip shop with halal. Edgware Road possiby has the most diverse choice of eateries in Europe. The usual Starbucks and Costa coffee branches can also be found. Possibly the most well known canal-wise is Cafe Laville, which offers unparalled views towards Little Venice. There is a large market in Church Street (open daily – extended market on Saturdays) and on that same street can be found a diverse choice of antique and second hand furniture shops. A number of electrical shops also make up Edgware Road’s variety of choices. The largest public house was the Tyburn at the Marble Arch end. This has now been demolished (2016) to make way for a new development at Marble Arch.

The Hilton London Metropole at the junction of Edgware Rd/Praed St. Paddington basin is immediately behind the hotel
There is a large Waitrose on Edgware Road, as well as a Tesco Metro within the basin area – these are handy for boats moored at Paddington Basin. One of the oddest stores was Allied Carpets, which closed down in 2009. The Odeon cinema complex at the Marble Arch end offered a choice of films until 2016 when it was closed and demolished to make way for a new development.
Hotels, B & B’s and guest houses are not surprisingly a major component of Edgware Road. These can be found on and off the road, around the back streets. The largest hotel without a doubt is the 1054 room Hilton London Metropole Hotel, which forms part of the backdrop to Paddington Basin on its north and eastern sides. Many of the restaurants in Edgware Road are open until at least 3am