Following on the success of the Grand Union’s Paddington Branch, the Regents was opened to exploit the potentialities offered by water transport. It was designed by John Nash and named after the Prince Regent of the time. The canal was planned as part of a substantial new developoment around Marylebone, that included Regents Park. The course of the canal through the park was changed to the north side because it was feared the unruly behaviour of the boatmen might cause problems. The sharp turn from Regents Park to Camden Town is a result of the change
Construction began in 1812, and it was opened as far as Camden by 1815. The section to the Thames at Regents Canal Dock (Limehouse) was finished in 1820. Just one branch was built, and a number of very large basins off the main line were provided instead. Twelve locks dropped the canal through 100 feet. Three tunnels were built (Maida Hill, Lisson Grove, Islington) and a quite substantial length of the canal sat in a cutting of variable depth. Few sections were level with the land. No aqueducts or embankments were constructed
The Regents was one of the most successful canals and during its life it acquired the Hertford union, and later the Grand Junction and the Old Union Canals, to form a network known as the Grand Union. Despite the GU’s success it was not enought to fight off the railways and the Regents network was assimilated into the nationalised network in 1948. The entire network remained busy until the 1960’s when commercial traffic ceased. Following cessation of this traffic, the idea of filling the canal in and building a road instead was mooted. In February 1967 the GLC decided to drop all proposals for infilling the canal. Numerous new developments are now being built at various points along the canal. No doubt the new waste transfer depot at Old Oak on the Paddington Arm will inspire further successes that have yet to be seen. This feature covers the Regents Canal’s route between Little Venice and Limehouse Marina. See the Regents Canal pages 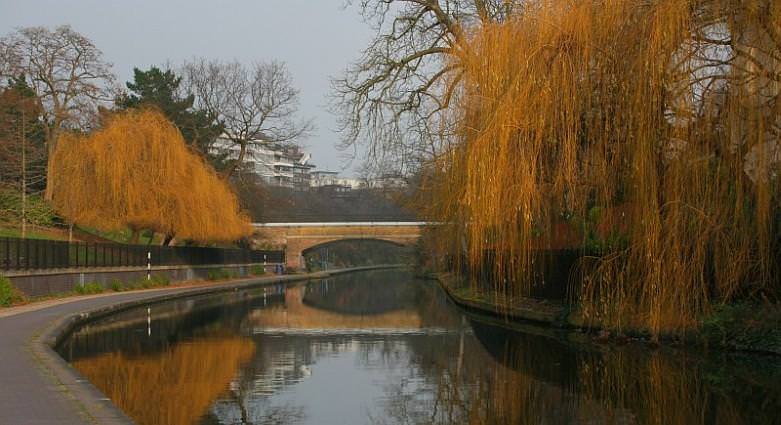 The canal through Regents Park in the winter. Not a single person in sight!

Warwick Avenue Bridge by Little Venice marks the start of the Regents Canal. There used to be a footbridge here at one time

The narrows by Warwick Avenue with the tollkeepers house 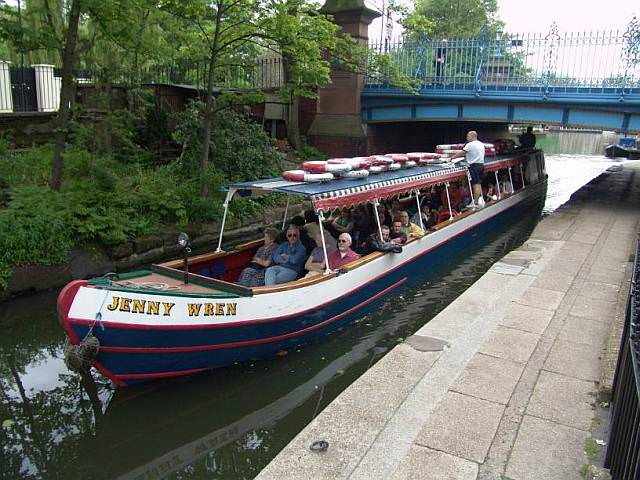 Cruising along Blomfield Road towards Cafe Laville and Maida Hill Tunnel. The tunnel passes under Edgware Road. Maida Hill is the highest part of W2 at 120ft 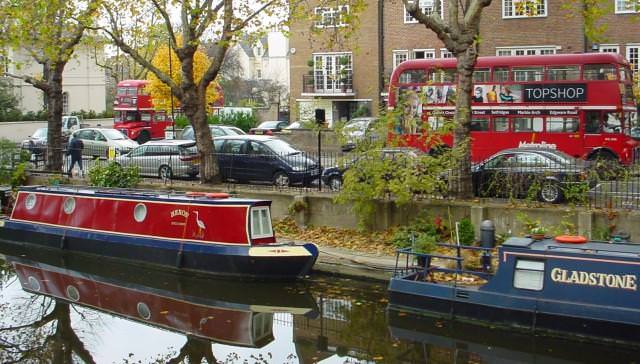 Here’s a rarity! A red canal boat and a red London bus viewed from the opposite side of the canal by Arthur Lowe’s home. During the middle two weekends of November 2003 all the Edgware Road bus routes were being diverted via Blomfield Road. Here can be seen a pair of RML’s (the rear bus is RML 2508) working the No. 6 route. During the same period the 187 route operator faced a stock shortage of buses, and for around two weeks the oddest collection of single and double deckers were seen working that route.

Next: Maida Hill to London Zoo