In this inauspicious corner of St Johns Wood is a shrine to many of the world’s rock bands, especialy the Beatles. Abbey Road Studios is the world’s renowed recording studios and many top artists such as the Beatles and Pink Floyd, have recorded here. The white boundary wall outside the studios must be the most continously painted in the whole wide world. Its painted every few months or so and yet is always covered in graffiti and writing dedicated to the various rock bands and their personalities

The Abbey Road studios. The property next door, Number Five, is for artists wishing to stay at the premises whilst recording
Abbey Road Studios led a rather quiet lifestyle until the Beatles decided to put a photograph of themselves crossing the road outside the studios on the cover of their album. This album put Abbey Road onthe map and it soon became a shrine to the Fab Four. The untitled LP named Abbey Road was actually the last ever Beatles recording ever, although by a quirk of fate the previous recorded album, Let it be, became their final released album. This was because of disagreement amongst the fab four, which meant that various tracks were being re-recorded over and over again. Some of these re-recordings were undertaken at the Apple Studios 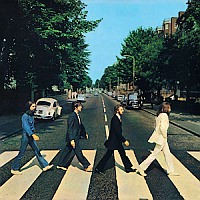 Beatles – the cover of the Abbey Road LP
Thousands of people each month make their way to Abbey Road, and many attempt to re-create the Fab Four’s pose. The only problem is the traffic is far more busier than it was back in the late sixties. The crossing must be the only one in the world where people want to cross the road just for the fun of it! There’s just one small problem… the present crossing is in a slightly different position to the original so its merely a case of suspending one’s cognitive beliefs oin how things looked back then and how they look now!

Traffic stops whilst visitors do a George, Paul, Ringo and John! (plus a fifth – some might assert it symbolises Brian Epstein)
The buildings were constructed in 1831 as a large townhouse. A hundred years later they were converted into studios. The first pop track to be recorded here was in 1958 when Cliff Richard recorded ‘Move It.’ The Beatles used Abbey Road from 1962 through to 1969. Pink Floyd were also long term resident at the studios from 1967 to 1973. Perhaps the most famous album ever recorded at Abbey Road is DSOTM (Dark Side of the Moon) which held the number one position in the album charts for two years. Some might assert that it is the album Abbey Road itself that is the most famous. Perhaps this is so, I suppose it depends on which camp one comes from. Dont let issues like this give you Brain Damage and always remember that its a Long and Winding Road when arguments of this kind are begun! The success of Abbey Road studios was partially due to the facilities that permitted many bands to experiment with electronic music, which is called psychdellic rock. Even the Beatles used this format in their later years following the successes of Pink Floyd and Jimi Hendrix. Here’s a complete list of recordings made at Abbey Road

A 139 and a 189 arrive, with more visitors to Abbey Road
The studios are not used just for rock or pop bands. Classical orchestras and solo artists record some of their music here. They can accomodate a 110 piece orchestra plus a 100 piece choir. Live music events alsotake place in the large Studio One. The studios’ involvement in some of the major films that are made must not go unmentioned. This work began in 1980 with The Empire Strikes Back. One work that was never recorded finally made the grade at Abbey Road in 1993 when the 1966 score written by Alex North, and discarded by Kubrick, for his film ‘2001’ soundtrack, was finally recorded. Other films such as Raiders of the Lost Ark, Shrek, Cold Mountain, Charlie and the Chocolate Factory, Lord of the Rings, and the Harry Potter films’ soundtracks are composed and recorded at the studios. Here’s a list of the complete film recordings

Flowers on the wall, with dedications to the Beatles. Most of these are in memoriam of John Lennon
The most common written word found at Abbey Road is without a doubt ‘All You Need is Love.’ Some gems I found on my visit to take these pictures included: Lets come together for the Beatles (hope that wasnt meant to signfy some sexual thing!); And in the end the love you take is equal to the love you make; With every mistake we must surely be learning; There must be hundreds of gems that forever go un-noticed 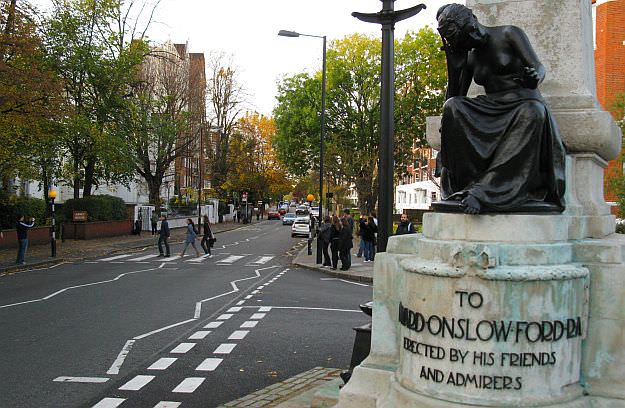 Ignored by the many thousands of visitors is this memorial to Edward Onslow Ford who was a noted sculptor
The Onslow Ford memorial is a replica of his Shelley memorial in Oxford and was unveiled on July 18th 1903. Here’s a link to pictures of the memorial in 1973 where the bronze woman has been adorned with a bra. Its probably the only occasion in recent times where someone has ever noticed the statue!
And here’s a link to the Abbey Road Studios’ webcam that is trained on the famous crossing 24/7
Getting there:
By foot: Abbey Road Studios is a short walk north from the Regents Canal at Lisson Grove. From Little Venice walk past Warwick Avenue tube station and down Warrington Crescent onto Sutherland Avenue. Cross Maida Vale and go up the hill – this is Hall Road. At the junction with Grove End Road its a short walk northwards to Abbey Road studios. Public Transport: Take bus 46 or 187 from Little Venice/Warwick Avenue to the stop immediately after the junction of Circus Road and Grove End Road. Buses that pass Abbey Road are the 139 and 189 which go to Baker Street and Oxford Street. Their bus stop is right outside the studios. Underground services can be found nearby at St Johns Wood on the Jubilee Line. NOTE: The nearest visitor moorings on the canal are those at Little Venice or Paddington