The western portal of Islington Tunnel. This location is just a stone’s throw from the very busy central London locations of Kings Cross, Caledonian Road and Pentonville Road
Islington Tunnel was offcially opened in 1820. It is not spectacularly long, but is considerably lengthy compared to most other tunnels in the south east. Currently it is the longest navigable canal tunnel in the south east
In terms of league Islington has always been the third longest canal tunnel in the south east region of England (first is, or was, Strood on the Thames and Medway canal at 3931 yards long – the second longest canal tunnel in the whole country – and indeed in the whole world. Strood still exists but serves a railway instead of a canal)
For the record, here’s a complete list of canal tunnels of the south east of England in order of length:
Strood: 3931 yards (converted into railway); Greywell: 1232 yards (closed 1932); Islington: 960 yards; Hardham: 375 yards (closed 1889) * Maida Hill: 272 yards; Chatham: 100 yards (closed 1920) * Elm Park: 75 yards? (never finished) * Lisson Grove: 53 yards; Little Tunnel: 50 yards (closed 1913)
As the list shows, all the currently navigable tunnels in this part of the UK are on the Regents Canal
*Notes: Elm Park was on the unfinished Romford Canal. Chatham is the only example of a Brunel built canal tunnel. It was an integral part of the naval dockyard and used for transporting timber. Hardham was the country’s only tunnel on a river navigation

View inside Islington Tunnel looking east
The tunnel was designed by James Morgan, whose stylish influence can also be seen at Maida Hill (if one can see round the obstructions at both portals) and Lisson Grove. The portals of all three tunnels were built in study stone, and very elegant for any canal tunnel. It appears that Islington Tunnel (then known as the tunnel under Pentonville Hill) was discussed in August 1812. A competition was heralded to encourage budding designers to submit their plans for the tunnel
The tunnel at Islington was the only one originally planned on the Regents Canal. As explained in the other sections, Maida Hill and Lisson Grove were later additions when the proposed course of the canal had to be altered to meet objections by landowners
One thing is emmenietly clear, if Maida Hill and Lisson Grove were not originally neccessary, why was Islington? The land south of Islington falls away to the Thames and there is clearly an alignment the Regents Canal could have followed, along the valley of the Fleet River (the route currently used by the Metropolitan, Circle and Thameslink lines) and then along the northern perimeter of the City of London, roughly where Clerkenwell Road is today, and along that alignment towards Old Street and City Road basin. The old City Road basin at one time extended under City Road itself almost to Old Street. It is one of those canal mysteries why this did not happen (its not the only example of its kind, there are many other tunnels that were found not neccessary – like the long Harecastle Tunnel on the Trent and Mersey canal which would have not been needed had a slightly different alignment had been used.) 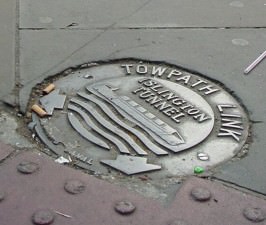 Plaques set in the pavement along the old boat horse route through Chapel Market and along Liverpool Road, Upper Street and Duncan Terrace. These denote the route between the sections of towpath at either end of the tunnel. The first two images show the old plaques, which had directional arrows and were obviously more useful. The right image shows the new ones of 2002 that replaced the older ones – these new ones are clearly less useful!

One of the new Islington tunnel plaques directly on top of the tunnel at the junction of Colebrooke Row and Duncan Street. The people seen in the picture are entering the steep pathway that leads from Colebrooke Row down to the Regents Canal towpath
Work on Islington tunnel possibly began in late 1814, as the digging of shafts were recorded in 1815, as well as a short length of the tunnel. The collapse of a road tunnel at Archway forced James Morgan to use stronger bricks and additional lining in the tunnel’s arch. It was not a easy job as springs and unstable gournd was experienced. Similar problems were encountered at Maida Hill tunnel. Completion was in 1818, and although the canal was not officially opened until 1820, it is possible the tunnel was in use earlier than that date

The Pirate boat & Walker’s Jenny Wren pass at the east portal of Islington Tunnel at the annual Angel Canal festival 2003, one of the rare occasions trips are available
The London Canal Museum has a page detailing their occasional public trips through Islington Tunnel
The dimensions of Islington tunnel are 19 ft 6ins in height and 17ft 6ins wide. Although it is a wide tunnel narrow boats are forbidden from passing in the tunnel. One of the reasons for this is the tunnel’s tumblehome sides. These slope inwards steeply and in some places may cause problems from narrowboats attempting to pass each other. The situation is not so critical for wide beam boats such as Beauchamp, which have been built with the tunnels’ profile in mind so that they can pass through within gauge limits
The tunnel had a steam tug service, which was introduced in 1826 and lasted until the 1930’s. A chain operated system was introduced which the tug pulled along, making the task of hauling barges through the tunnel quicker and easier
Apart from issues related to the New River, which once crossed the arch of the tunnel near its eastern portal, Islington tunnel has been relatively free of problems until recently. In the 1980’s major work was undertaken to repair the lining of the tunnel through its middle one third section. A coffer dam was constructed at both ends and boats were used to transport materials and workmen to the site. Further work was undertaken in 2000.