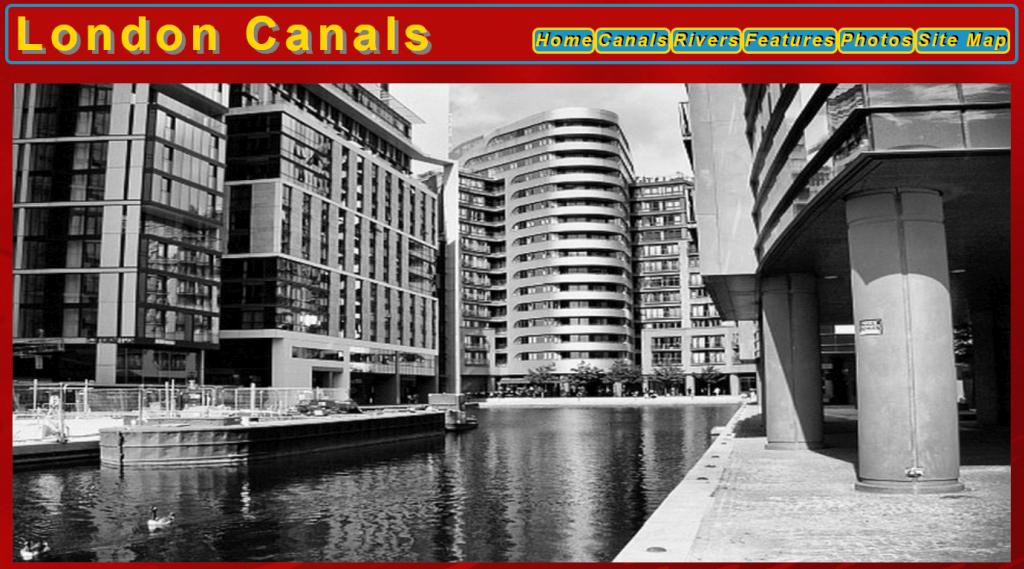 Plaques sited underneath bridge arches are in poor condition, often rusting, due to repeated cleansing in removing graffiti off the walls. Those on stand alone posts or on offside/inaccessible walls are as a rule in generally good condition.
Notes: ‘BWB’ denotes the old British Waterways Board.
*No longer on site or severely damaged
The strange bollards at Stonebridge Lock on the Lee Navigation may have been a prototype Canal Way marker, later deemed unsuitable and given to BWB for other uses.
Observers will note the symbol used on the Canal Way plaques and markers. This also forms that for both the Jubilee and Jubilee Greenway Walks. 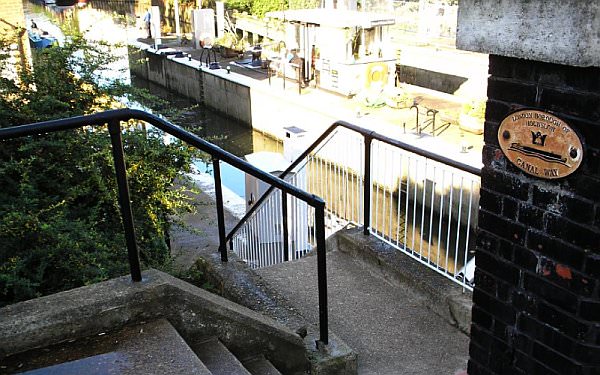 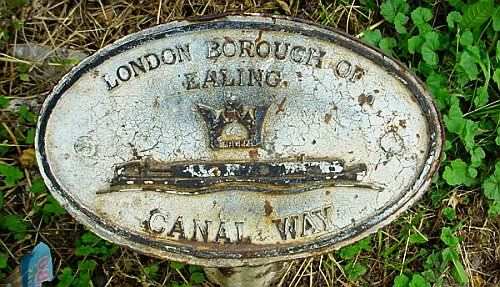 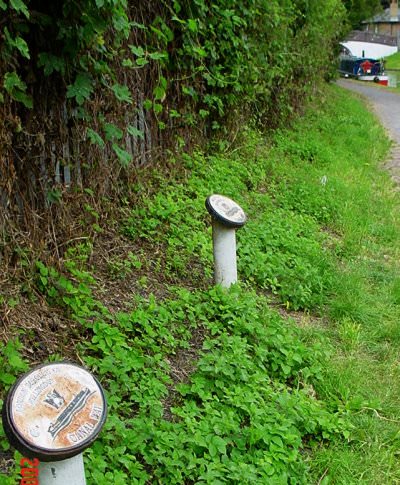 Uxbridge Lock – Hillingdon/Beaconsfield councils
The Grand Union Canal is unusual in that it has Canal Way plaques for non London boroughs In this instance its the District of Beaconsfield. This was a short lived council that existed between 1974 and 1980. Hence the plaques must have been installed in 1979-80. The area is now known as the South Bucks District.
As for the other external London boroughs involved in the scheme, it is not known whether Buckinghamshire, Hertfordshire and Three Rivers District Councils were denoted on Canal Way plaques.
The London Borough of Hillingdon plaques exist in a number of places on the Grand Union Canal and also at one location on the Paddington Arm. 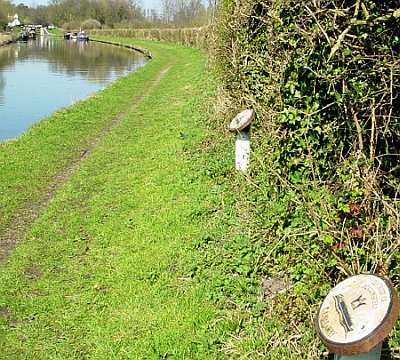 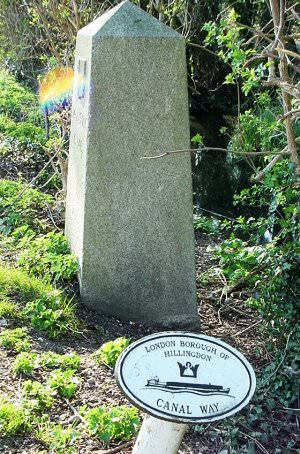 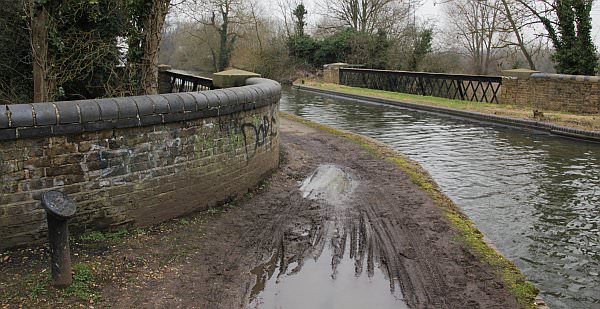 Slough Arm – Frays aqueduct – Hilliingdon (Beaconsfield on Slough side of aqueduct)
The plaques are on the towpath either side of the aqueduct. Hillingdon’s is on the side nearest Cowley whilst Beaconsfield’s is on that nearest Slough. This is not the only example of plaques sited at an aqueduct, for the Yeading Brook crossing near Bull’s Bridge featured a LB Ealing plaque as shown earlier.
Paddington Arm:
On towpath south of Engineers Wharf, Northolt: LB Hillingdon
Offside by Gateway Ind Estate, Willesden: LB Hammersmith
Kensal Green Cemetery: RB Kensington & Chelsea*
Ladbroke Grove: CityWestminster*/RB Kensington & Chelsea (Westminster plaque broken deliberately c2002)
Meanwhile Gardens W10: Signs denoting RBKC as guardians of towpath
(Canal is boundary between CityWestminster & RBKC but towpath is within RBKC)
Warwick Avenue Tube Station: Signpost to Little Venice* 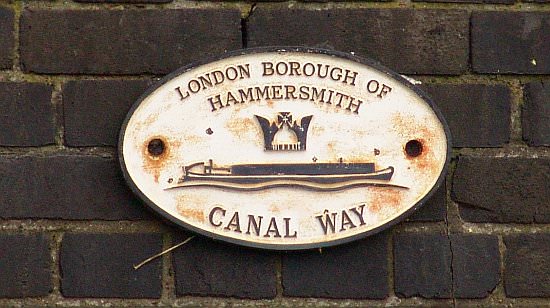 Old Oak (Gateway Industrial Estate) Hammersmith
The Hammersmith plaque is quite a rarity. I think it is the only instance where that council had a plaque bearing its name on the Canal Way. For some unknown reason, the plaque is on an offside wall rather than alongside the towpath. 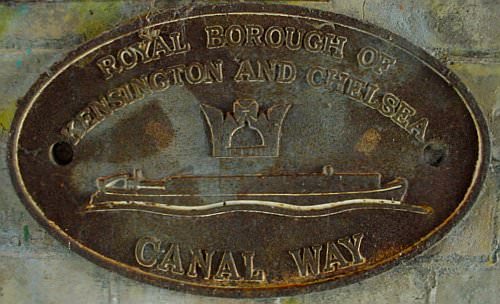 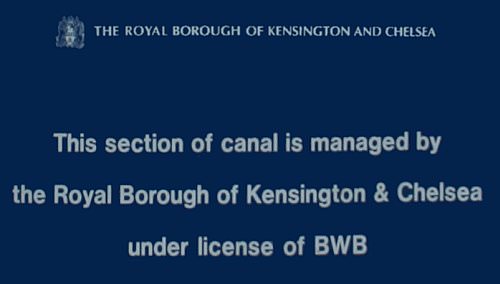 Non-standard Canal Way notice. Kensington & Chelsea
The stretch of canal between Westbourne Park and Kensal Green is in Westminster, however the towpath forms the boundary with Kensington and Chelsea. We have the unusual situation where the waterway’s route is sited in both boroughs. Because of this, the towpath is in some respects unadopted by the Canal Way scheme, and so RBKC had these special notices made to show that they were the guardians of the towpath and not the GLC/Canal Way. 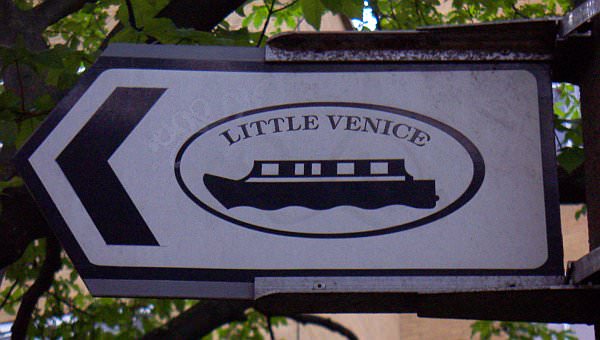 Warwick Avenue tube station – Signpost to Little Venice
The Warwick Avenue sign vanished a number of years ago. But it was clearly an oddity. I am not sure whether it was an early icon for Canal Way, or a later one that was never implemented across the network. In some ways it may have been a later one because I am sure few knew what the butty symbol stood for and it may have been that the planners later decided a cruiser was a much more recognisable symbol.
Regent’s Canal:
Aberdeen Place NW8: Large signs denoting route to Little Venice via Blomfield Rd* (vanished 2006)
Aberdeen Place NW8: Two generic Canal Way plaques
St Marks Bridge, Regents Park: LB Camden/CityWestminster
York Way, King’s Cross: LB Camden* (missing since bridge was restored c1999)
At strategic locations over the top of Islington tunnel: One remains in Penton St. 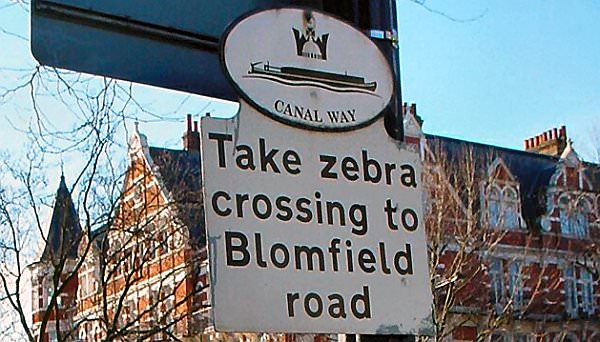 Aberdeen Place/Edgware Road – general Canal Way marker and instructions for crossing Edgware Road
The signs in Blomfield Road were the most substantial on the entire Canal Way network. Approaches to the Edgware Road crossing and confusion as to where the route led towards Regent’s Park gave credence to these large signs either side of the Edgware Road. Of course there were no traffic lights at Edgware/Blomfield Roads when Canal Way was implemented. The road layout was changed and lights with pedestrian (and later cycle) phases were introduced. The zebra crossing became no-more yet the sign in Aberdeen Place survivied until 2006, presumably taken down because it referred to a crossing that no longer existed… 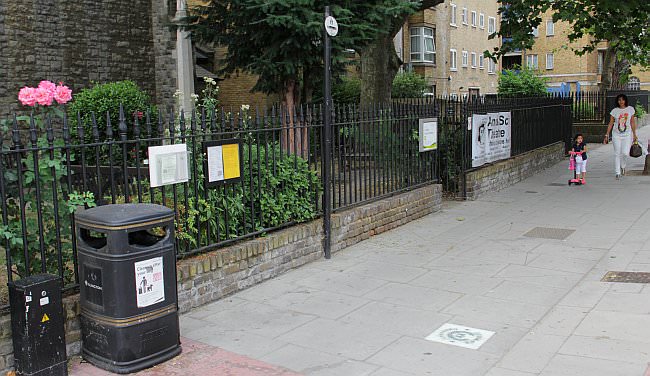