A tour around Little Venice Part 3

The Blue (and Green) plaques of Little Venice

Generally Blue Plaques are those of English Heritage and the former Greater London Council. The Green ones are from the City of Westminster.
Many famous people live in and around the pool area and elsewhere in Little Venice and Maida Vale. We return to the Brownings Pool area and examine what must be one of the grosser oversights in terms of famous people and the publicity that tourists get. Robert browning, the famous poet, was a noted resident in the are and he actually lived in a house overlooking the pool that bears his name. What is this oversight then?
There’s this massive mural dedicated to Robert Browning. Whats more surprising is that it is right smack in the pool area. It sits not less that 20 yards from the pool. Yet not one guide mentions it and not one internet source mentions it and not one single British Waterways map or canal guide or any other tourist information guide mentions it!! Its amazing that with so much publicity on Browning’s connections to the locale, there is no mention of this memorial to him!! Its right bang smack in front of the famous Blue bridge, and every single visitor to the pool that walks down the ramp from the Blue bridge passes it without even knowing it is there. Here it is: 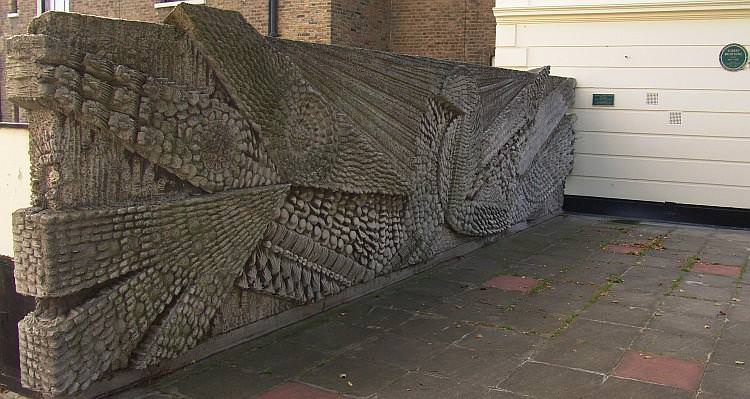 This ‘sculpted’ mural commoreates Browning & his poems. Its a grotesque work of art. Actually its no surprise there’s not any interest in the work!
Below: Close up of plaques that tells us he lived in Warwick Crescent and a second that lists the benefactors of the mural

Where is it? Right opposite the entrance into Brownings Pool by the Blue Bridge in an unmarked square.
Now some other blue/green plaques of noted characters of the area!
On the other side of the pool is Warwick Avenue and at least one plaque can be seen here. This is at Number 8, and tell us that Sir Lennox Berkeley, compser, lived there between 1947 and 1989. 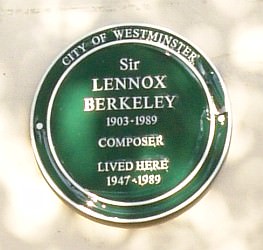 10 Howley Street – View of Canaletto plaque from the pavement outside the house
Round the corner in Howley Street are two plaques. One is of Tilak and the other is of Canalletto. Although Canaletto is well known as having lived in Central London at 41 Beak Street, just of Regent Street from 1749 to 1751, he worked at a studio on the site of what is now 10 Howley Place between 1746 and 1755. The other notable is Bal Gangadhar Tilak, known later as Lokamanya (or Lokmanya) an Indian philosopher who lived at the same location in Howley Street in 1918-19. He was the leader of the Indian Independence Movement and at the forefront of the movement for independence from Britian. Here’s the plaques below for both Canaletto and Tilak, although the latter is difficult to see.

In adjacent Maida Avenue (parallel to the canal) we have two plaques. The first is for John Masefield, Poet Laurate, who lived at Number 30 from 1907 to 1912. The second is for Arthur Lowe. Many will remember him as Captain Mainwaring in BBC TV’s Dad’s Army. He lived at Number 2 Maida Avenue from 1969 to 1982. The house has excellent views of the Regents Canal and the entrance to the Maida Hill tunnel. 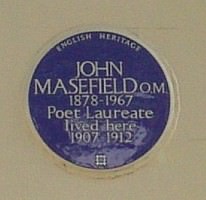 View of Arthur Lowe’s house at Number 2 Maida Avenue with the plaque high up on the wall
Other notable plaques (pictures in alphabetical order)
Straight over the Edgware Road junction into Aberdeen Place and at Number 32 is Guy Gibson. He was the leader of the famous Dambusters squadron during WWII. 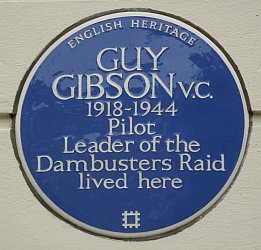 Still in Aberdeen Place at Number 17 is a plaque for Emily Davies (1830 – 1921) who lived here. She was the founder of Girton College in 1869 in Hitchin. It later moved to Cambridge. She was also a feminist and suffragette. Her ambition was to ensure women had access to education and for these reasons Girton was established, as Britain’s first womens college. Her associates were noted feminists Elizabeth Garrett Anderson and Millicent Fawcett.
From Aberdeen Place its back to Edgware Road then right into Maida Vale, then left into Clifton Gardens. Sir John Ambrose Fleming (1849-1945) who originated from Lancashire, was a physicist and his vacuum tube is his greatest achievement. Much of his work was used in electronic communications. He lived at Number 9.
Head for Warwick Avenue tube station and turn right to see the next which is Alan Turing (1912 – 1954) whose birthplace is at what is now the Colonade Town House Hotel in nearby Warwick Crescent. He was of course the famous Bletchley Park code-breaker, as well as a brilliant mathemetican and an expert on the concepts and philosophies of computers and computerised machines. His definition of what makes a computer human (artificial intelligence) is still an all-important factorisation these days. Turing was recently given an apology by the British Government on Sept 10th 2009 for the wrongful persecution the establishment led against his sexuality.
Continune up Warwick Crescent and near the top end on the right are these rather dimunitive houses (compared to the rest of the area) and in one of these lived David Grun, who is more well known by his later name of David Ben-Gurion (1886 – 1973.) He was the first prime minster of Israel, a post he held from 1948 to 1963.

A short throw away in Sutherland Avenue at Number 182 was the home of Andreas Kalvos from about 1817 to 1820. He was one of the great Greek writers of the 19th century. His residency at Maida Vale was the first of two spells of residency in England. Head north to Elgin Avenue for the home of Jawaharlal Nehru at Number 59. Nehru was the first prime minster of India and its longest serving, from independence in 1947 up to 1964. He lived at Elgin Avenue from 1910 to 1912 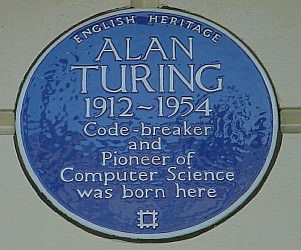