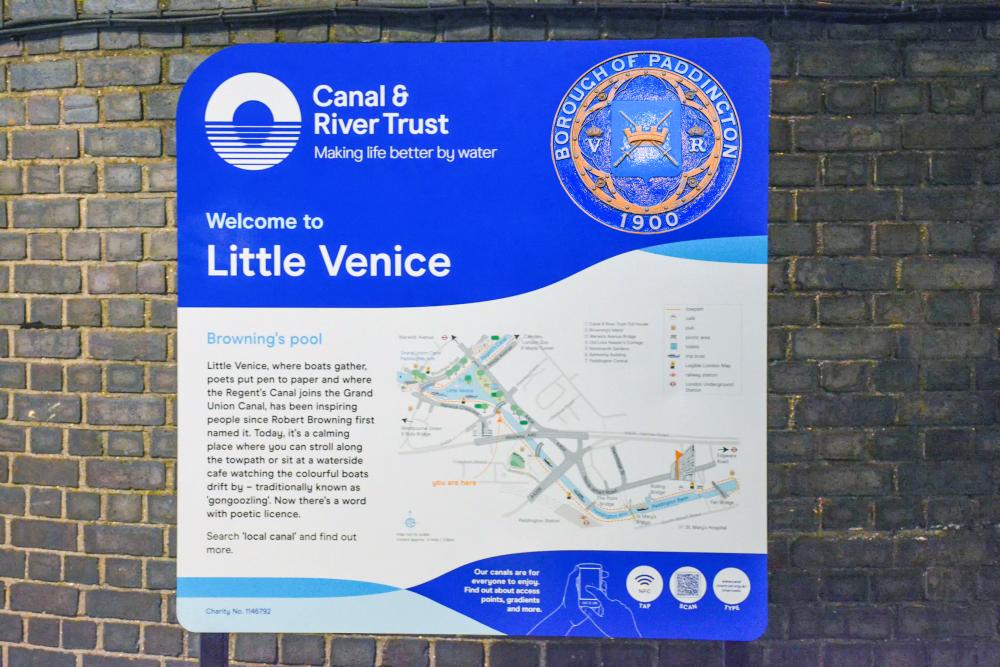 The Kilburn Aqueduct and the Westbourne River

There were just two aqueducts on the London canal system in it’s early days. Besides the substatial crossing over the River Brent near Stonebridge, there was also the Kilburn Aqueduct in what is now London’s Little Venice. This was a substantial structure with a 30 foot high embankment that crossed the Westbourne Valley below what were known as the Kilburn Fields.
In an area such as Little Venice, or even Paddington, it would be a surprise to most to find that there was a major embankment and aqueduct there at one time. Parts of the huge embankment, now mostly buried beneath elevated ground levels, can still be seen especially at the northern end of Little Venice. 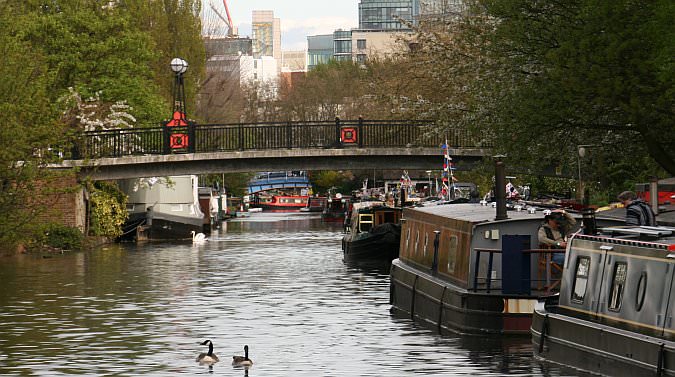 Little Venice moorings with Formosa St (Lord Hills) footbridge. Few know there was an aqueduct at this very location.

Where was the Kilburn Aqueduct?

The aqueduct was sited about a third of the way along the Little Venice straight (aka the Delamere Terrace/Little Venice visitor moorings.) It was a very long brick built structure through which the Kilburn River/Westbourne, and later the Ranelagh sewer, flows. 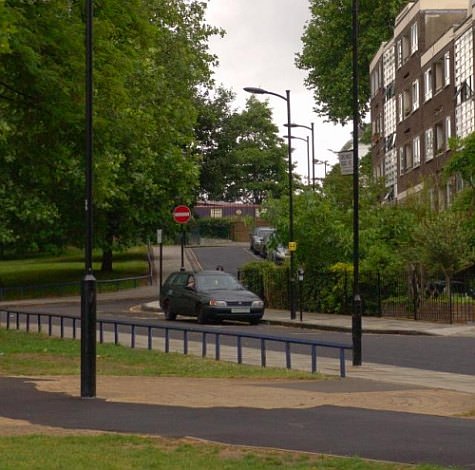 The Kilburn embankment at Little Venice about where the south end of aqueduct was.
The above picture looks along the site of the former river valley towards a boat moored on the canal (centre of picture). Just a small height of the original embankment remains, it was originally 30ft high. The approximate location of the southern end of the Kilburn Aqueduct would have been near where the car is in the above picture. Constant development of the area since Victorian times has enabled the present perspective which gives an impression both canal and natural local terrain are on a level. The recent re-landcaping of the pathways and green behind St. Mary Magdalene church has made the differences in elevation once again more obvious.
Early pictures of the Paddington Arm show that much of the waterway from the west end of Paddington basin to Westbourne Green bridge (now Harrow Road no.2) straddles the side of the Westbourne valley, crossing it about halfway via a huge embankment. The aqueduct itself is clearly shown on maps of the canal before the 1820’s. 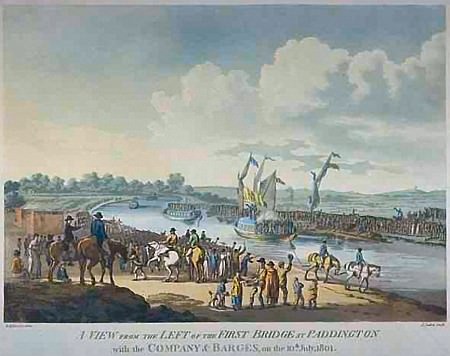 Opening of canal 1801 clearly showing embankment over the Westbourne valley
In a contemporary report of 1814 it is said of the Kilburn Aqueduct that “It is formed over the valley to an elevation of 30 feet above the natural surface of the ground; a brick aqueduct here… being made for the conveyance of the canal over the Serpentine River or Westbrook.” (The Serpentine River/Westbrook simply being other names for the Kilburn/Westbourne river.)

Modern view of same section. It’s clear the aqueduct is slightly to the east of the Formosa St footbridge.
The aqueduct is not acknowleged in either canal literature or by Canal & River Trust. Just recently (perhaps as a result of London Canals’ earlier findings on this subject) the aqueduct’s existence is now discussed on other websites.
John Doe’s remarkable set of photos clearly show the aqueduct’s arch. Its now part of the Ranelagh sewer system. Credit/copyright are acknowledged under Flickr’s creative Commons License. John Doe’s main page and profile is here at Flickr. 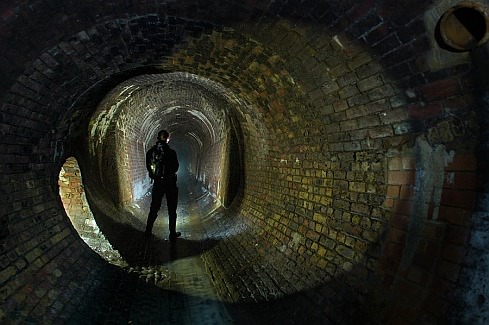 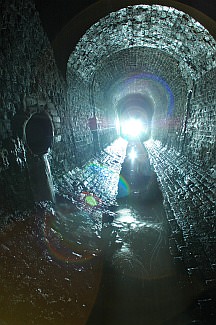 Views of Kilburn Aqueduct, still in existence under the canal at Little Venice. The person is shining their torch onto the brickwork that constitutes the southern face of the aqueduct. In both pictures the distinctive shape of the structure can be seen. 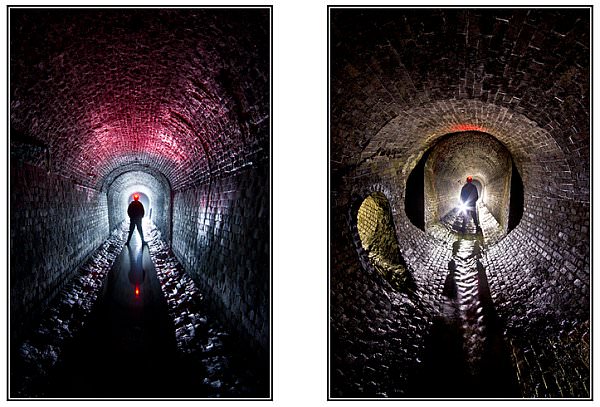 More images of the Kilburn aqueduct – these can be seen at: Silent UK

How the canal caused flooding in the Westbourne valley 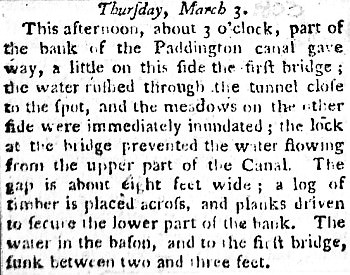 Gentlemans Magazine 1803
The above news item from the Gentlemans Magazine of 1803 describes one of the many breaches that occured as a result of the very large Kilburn embankment, which stretched nearly all the way from near what is now Bishops Bridge Road as far as Westbourne Green bridge (the Harrow Road) a distance of about a mile. The water broke through the canal to the valley and then through the canal’s aqueduct (‘the tunnel’) flooding the fields.

1803 news cutting mentioning breach and the Kilburn Aqueduct.
The breach of 1803 was well documented, however as the item above shows the media may have over-emphasised the source and extent of damage, ascribing the wind instead as the cause of breach.

Changes to the Westbourne valley & overflows

In order to protect properties from further flooding due to the canal embankment acting as a dam when instances such as the canal overtopping its levels occurred, the Grand Junction Canal Company was forced by injunction to build an overflow near Bridge no 1 (first Harrow Road crossing.)
By the 1830’s when the area was under development, especially with regards to the railway, the Westbourne had its course diverted and straightened out onto a parallel close to the southern end of Westbourne Terrace, and culverted beneath that road. The site of Paddington station was built within the old river valley. The original overflow was thus rendered useless.
A new overflow was built (it can still be seen by the A40(M) Westway.) It connects to the Titchbourne culvert which in turn links with the Ranleagh Sewer somewhere under Bayswater Road. The Titchbourne originated on the high ground near St Johns Wood and passed under Edgware Road near Boscobel Street. The lower end of its course can still be seen today in the form of the valley that stretches south from Bayswater past the Royal Parks head offices towards the Serpentine.

The ‘end’ of the Kilburn Aqueduct

Progressive development of the area since the canal was built meant the Westbourne river was now becoming an open sewer. Around the early 1820’s locals complained the awful smell emanating from the Westbourne. It was culverted for a considerable distance either side of the aqueduct by 1823. (Some sources wrongfully claim this section was done as as part of Joseph Bazalgette’s work during the 1850’s.)
Joseph Bazalgette culverted the remainder of the river as part of the master plan to improve London’s sewerage system. The river now runs in a culvert all the way from Kilburn to the Thames and as a result few now know of the Westbourne’s exact course as it makes its way from Kilburn past Carlton Vale, Paddington recreation ground, Shirland Road, Formosa Street, Blomfield Road, Delamere Terrace, Paddington, and Lancaster Gate before running underneath Bayswater Road itself before heading south towards Sloane Square and the Thames at Chelsea. Few now know where the Kilburn aqueduct stands.

Not London’s only underground aqueduct!

The aqueduct at Little Venice is not the only such underground structure on the London Canals. Kings Cross has a more modern example where Regents Canal cross the railway lines just to the north of the Kings Cross station platforms. The need for an aqueduct was because there just wasnt enough clearance between the railway tunnels and the canal bed.
Most people have no idea there is an aqueduct at this point, and boats moor unwittingly above it! Few know where to look for it and in fact its hidden well from view. The only way of reliably gaining a sighting is to take a train departing only from platforms 9, 10 or 11 at King’s Cross. As the train leaves the platforms and enters the tunnel – depending on lighting levels – the aqueduct’s cast iron base and supports can just be made out in the darkness.
The proper name (according to Canal Planner) for the structure is King’s Cross Railway Aqueduct.