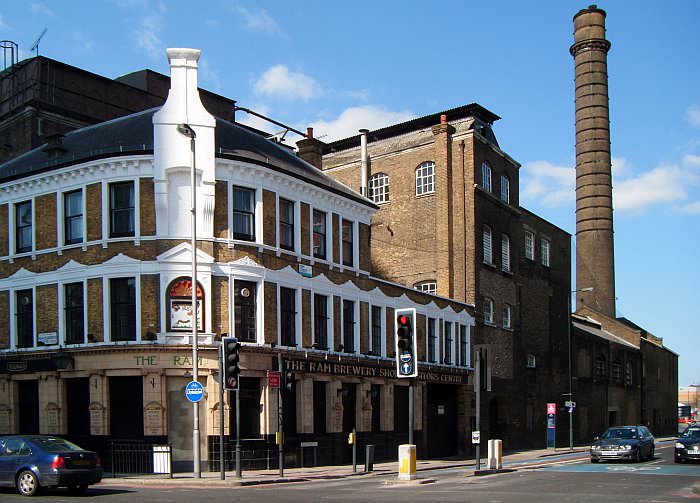 Youngs Ram Brewery in Wandsworth, closed in 2006. The canal basin was sited just behind the works’ iconic chimney. 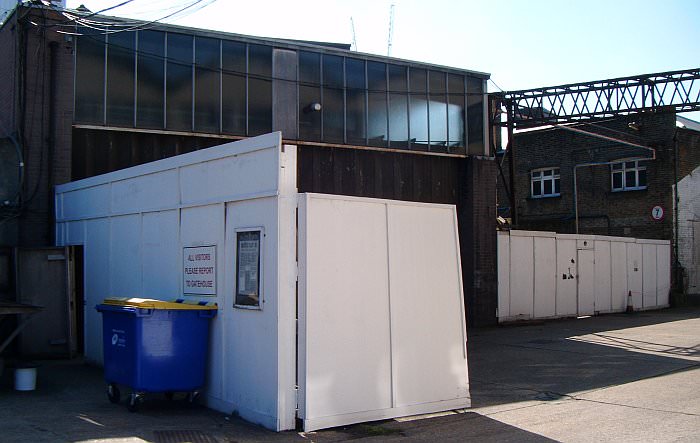 Site of the canal basin within the brewery in 2013
(Permission was allowed by security to take these pictures from just inside the brewery gates.)

A comparision between today’s scene & one from the 1920’s showing the basin. The same building/windows evident in both.
Ownership of McMurrays canal during the first few decades of the 20th Century is not known, but in the 1930’s it was bought by the Wandsworth, Wimbledon and Epsom District Gas Company. Almost immediately the company filled in the basin and built the large gas holder that became such a prominent feature in this part of Wandsworth.
Other sources claim the canal closed in 1937 and was filled in soon after. However archive pictures show the entrance lock and a substantial length of watered canal above still in situ as late as 1956. It appears that the main basin area was infilled in 1932 as previously mentioned, then the remainder of the canal closed in 1937, and this latter section lay disused until the 1950’s. 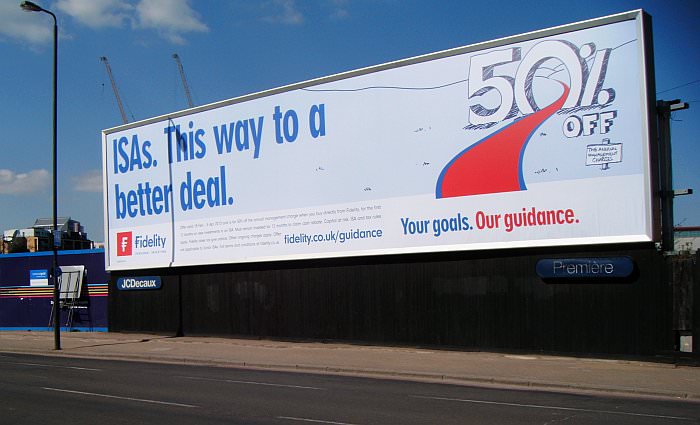 McMurrays canal lift bridge would have been roughly where the large advert is seen. The location is Armoury Way

The canal and its lift bridge at what is now Armoury Way. The only building left from this 1930’s scene is the church tower of St Ann’s which is faintly seen at far left.
The Church of St Ann’s was one of the earliest in London to be lit by gas in early 1835. The adjacent Ram brewery also had part of its premises lit by the new energy source. The gas came from a small works built the year before and operational by February 1835. The Wandsworth Gas Light & Coke Works had its premises adjacent to McMurrays canal, and it was this company who later as the Wandsworth, Wimbledon and Epsom District Gas Company bought up the canal and had most of it filled in for a major expansion of its premises. 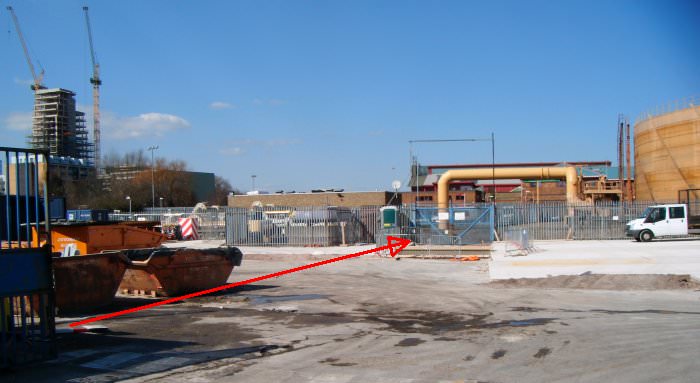 The red arrow marks the canal’s former course from Armoury Way across this industrial land towards the railway.
Compare the above with the painting below made from a similar location in the 1800’s. 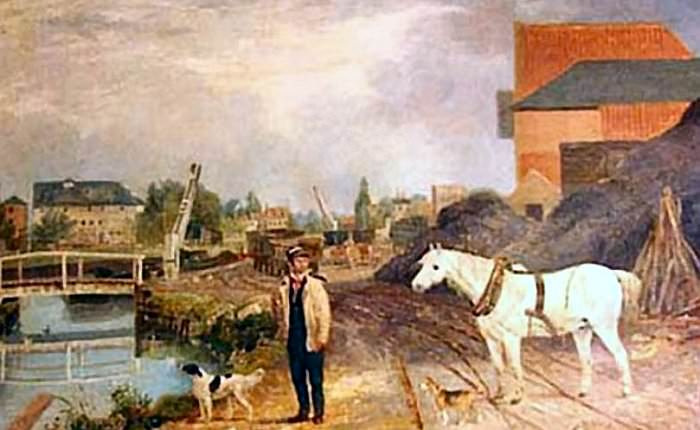 ‘Wandsworth Bason’ where the Surrey Iron Railway began. A fixed bridge across the canal and two cranes can be seen.
The above painting, artist unknown, and showing the railway in 1804, is said to have been procured in the 1820’s and was painted at a spot about where Armoury Way is now. The man with the dog is said to have been connected with the brewery. One of his descendants was later a foreman at the Youngs Brewery. The painting passed from the foreman into the hands of Youngs Brewery and was displayed in the company’s main offices. The painting has not been seen for a number of years and its current wherabouts is not known.
It does appear from the above picture that the canal originally finished at what is now Armoury Way as the bridge appears to be fixed. The section to the brewery was completed with lift bridge under the railway’s second act in 1805 authorising these works. 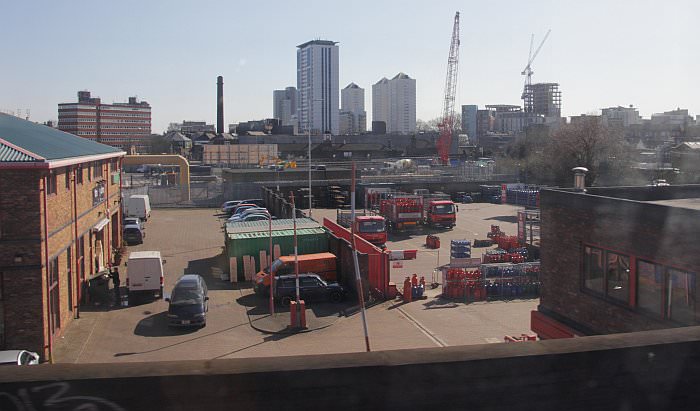 This flat area seen from the railway bridge would have at one time consisted of canal wharves and railway sidings. 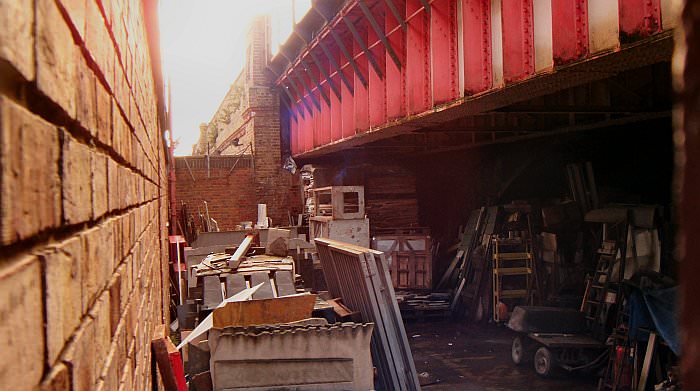 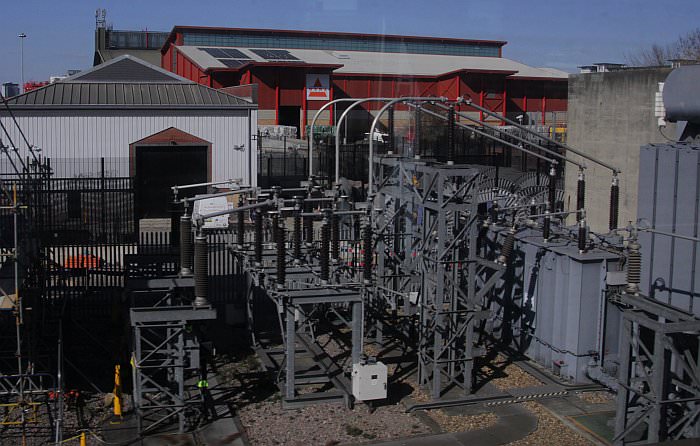 North of the railway, a electrical substation now sits on the former canal site. The waste transfer station is in the background.
The tracks of the Surrey Iron Railway ended at a point at what is now a electrical sub station (shewn above) to the south side of the Causeway. 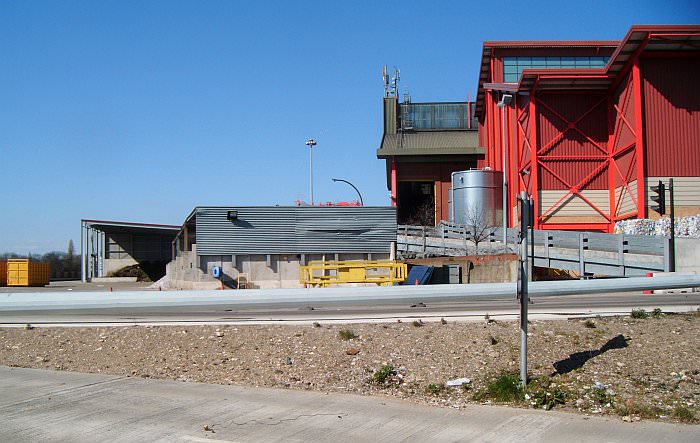 Looking along the canal alignment towards the Thames. The site is now the waste transfer facility. 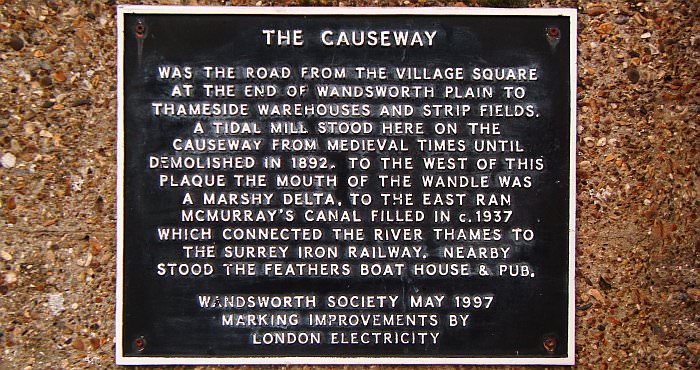 Plaque by Wandsworth Creek reminding us of the erstwhile McMurray’s Canal.