The Pudding Mill River clearly extended southwards as far as the old bridge that formed a link between Marshgate Lane and a scrapyard to the north of the railway lines. This section remained in water until at least 1983. In redeveloping the access roads around the Marshgate Industrial area soon after that date, the extension of Pudding Mill Lane used the actual course of the river under the North Outfall Sewer to give lorries more headroom. The Pudding Mill River was stanked off on the other side of the Northern Outfall Sewer. The section of Marshgate lane underneath the Northern Outfall was taken out of use.

Above: Looking straight along the Pudding Mill’s former alignment towards the North Outfall Sewer. It ran through the leftmost of the three arches of the 254ft long aqueduct. This picture was taken in 2003 before a car sales lot was established here. In both pictures the remains of the of the overbridge over the former river channel can be seen. The Pudding Mill River extended to this point until at least 1983. This tells us that the section southwards to the junction of both Pudding Mill and Marshgate Lanes was filled in prior to that date, although it has not been ascertained when this took place. 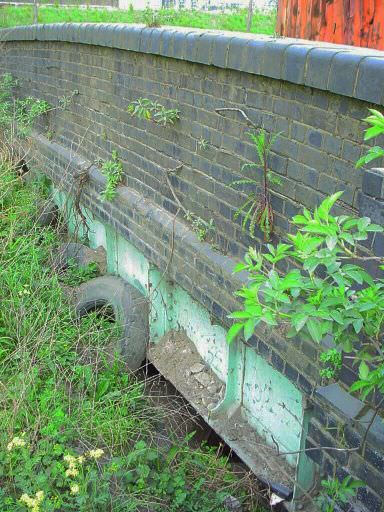 A view along the old Pudding Mill alignment in 2003 – the navigation arch was sitedn where the blue steel shutter is.

This strange valve equipment was buried in 2003 but could be seen in 2005 when the area had been given over to second hand car sales. Its anchored on top of the old Pudding Mill River’s retaining wall. 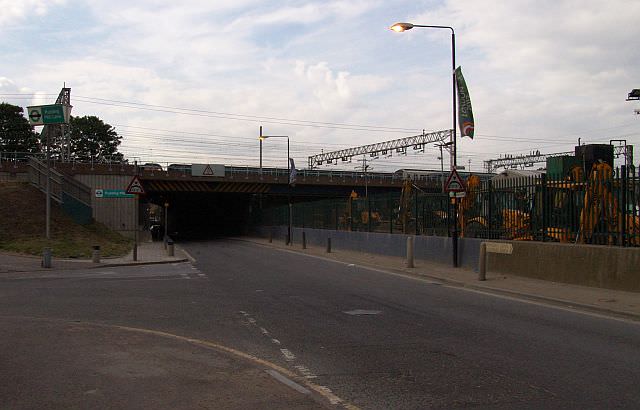 Pudding Mill Lane and the retaining walls of the Pudding Mill River in 2005. The ‘blue’ section is obvious

Notice declaring that the Northern Outfall Sewer’s abutment was placed on the ancient river wall of the Pudding Mill River.
The full text is as follows: Essex Sewers – This erection is placed on the old Ancient River Wall by permission of the Court of Sewers subject to all their rules and orders. The Owner is required always to keep the surface of the Ground up to this -> STANDARD LEVEL <-

The Court of Sewers were originally known as the Commission of Sewers and as the text above shows, their responsibility was to deal “with the drainage of low-lying land and its protection against floods…” The Commission (for Essex) was established in the Sixteenthteenth century, and ended its days as the Court of Sewers in the 1940’s. The notice at the Northern Outfall Sewer dated from the 1860’s so its clearly historic, although it is not known what happened to it.
The distinct blue concrete wall formed the west side of the old Pudding Mill River. I dont know why it was painted blue along this section! This blue wall was one of the final remanants to be seen of the old Pudding Mill River in 2012 (see below.) 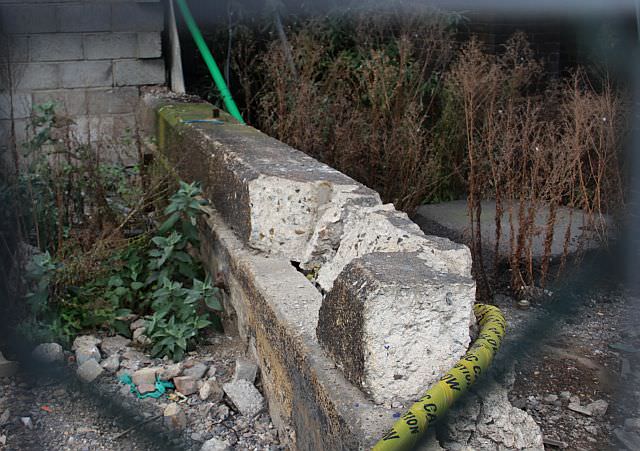 Seen through security fencing in early 2012 – the old Pudding Mill River concrete wall by the DLR bridge
The concrete wall shown above is original 1930’s Bow Back reconstruction material. A stump from the traditional 1930’s style Lee Conservancy railings can be seen in the top of the wall. This wall could not be seen in earlier years because of the undergrowth seen in the lower left hand image.

The course of the Pudding Mill River as it ‘narrows’ to go under the restricted width railway arch. These two pictures show the site that was the Pudding Mill River’s remains in 2003 after its course had been infilled and the land turned over to use for a scrapyard. Now its all gone. The access roads to the 2012 London Olympics were built along these alignments. 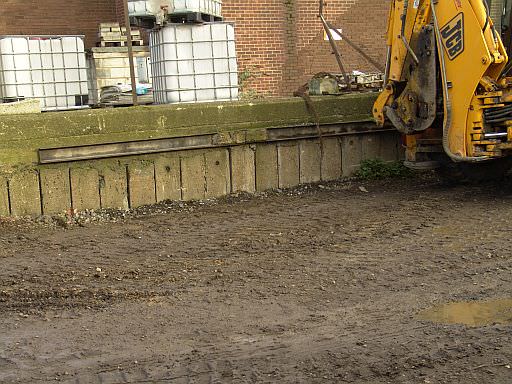 A view taken in 2004. On the east side can be viewed the old bank piling of the Pudding Mill River which consisted of concrete piling. This is typical of the Pudding Mill River. It was always thought that the concrete wall on the west side was built as part of the 1930’s improvements. A close examination of that showed it was of much later construction, which may have been to facilitate the widening of the adjacent roadway.

A little way south of the railway arches, a much wider Pudding Mill river profile could be seen. In this view looking south, the old Mercedes Benz sits by railings that were clearly a feature of the 1930’s Bow Back Rivers re-development. Just past these cars, vans, jcb’s and other diggers, the Pudding Mill River terminated.
Beyond was Marshgate Lane and warehouses separating the truncated end of the Pudding Mill River and the Bow Back River/St Thomas’ Creek. The original Pudding Mill river re-joined St Thomas’ creek prior to the 1930’s. In the redeveloped version it was truncated by Marshgate Lane, at which point a wharf served the local gasworks.

The concrete retaining wall – one of the last remnants of the Pudding Mill River seen in early 2012.
The retaining wall on the right in the above image is the same one as that seen in the picture with the Mercedes. The unique 1930’s railings have gone as have the scrap cars and JCB’s. The old mercedes was sited adjacent to the blue net fencing, its former location marked with a red cross. The view looks north towards the DLR Pudding Mill Station. 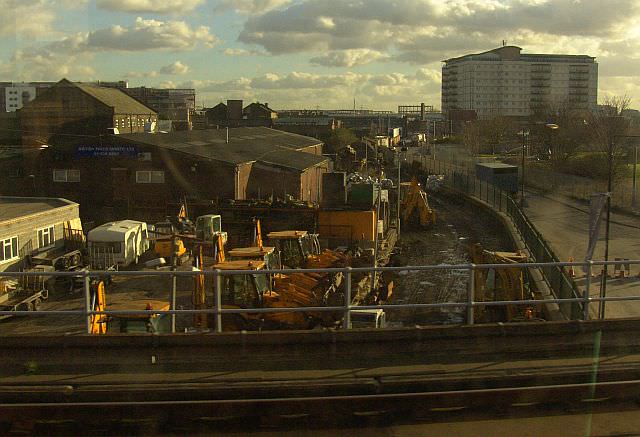 The Pudding Mill channel seen from a Docklands train in 2006. The scrap vehicles had by then been replaced by JCB’s

The same location in early 2012, with the access roads to the parking areas nearly finished. The ArcelorMittal Tower is seen in its uncompleted state.
The ArcelorMittal Orbit Tower is 377 feet high (115m) and is billed as Britain’s largest sculpture/artwork. It was designed by Anish Kapoor. There are 500 steps up the structure, as well as lifts. The Guardian polled its readers for their opinion on the structure. 38% said it was a grand design whilst 61% saw it as garbage!