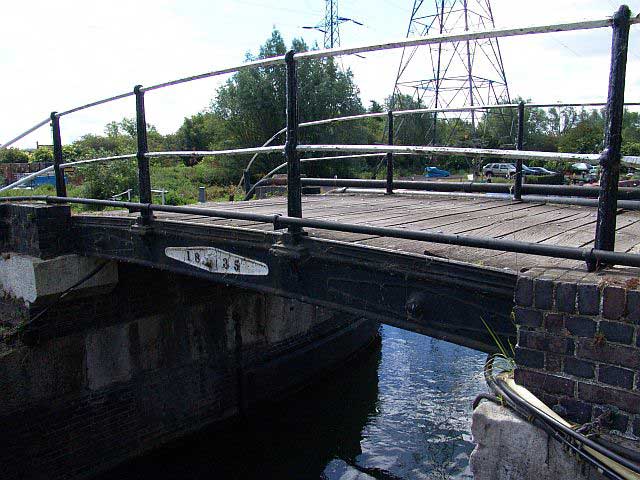 The 1835 iron bridge at Rammey Marsh Lock. It was closed recently due to structural faults
Rammey Marsh is the second of two partially mechanised locks on the navigation. The first was that at Enfield. From here to Hertford the locks are entirely manual. As soon as one passes under the M25 above Rammey Marsh, they are at Waltham Abbey. Its not a brilliant stretch of waterway but its likeable, and there is a pub by the main road bridge and useful shops in the nearby town. A visit to the abbey itself is recommended – one must simply see the signs of the zodiac painted so intricately onto the abbey’s ceiling, its a wonderful sight. The Royal Gunpowder Mills are a short walk away and it is worth a visit – you may even get to see one of the Armoury’s own private canals.

The entrance to Hazlemere Marina. There is a water point and a sanitary station accessible from the towpath. It might be difficult to believe but at one time this location was the intersection of four different waterway routes!

On the opposite side of the Lee Navigation lies the Horsemill Stream relief channel which changed the face of the waterways around here and truncated yet more of the connections between the Lee Navigation and the River Lea. This view looks across the Horsemill Stream to the former Waltham Abbey arm. This arm split into two further branches, one serving the town and the other the Royal Gunpowder Mills. There was a whole host of wharves serving different industries along the River Lea itself as well and there is no trace left. For boaters on the Lee Navigation there is just no way onto the river anymore. 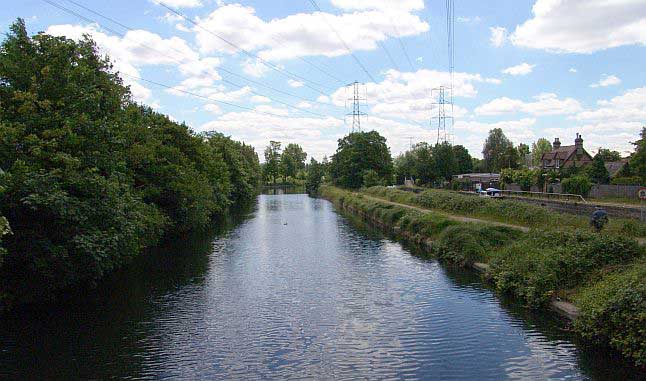 The new River Lea (Horsemill Stream) and Lee Navigation at Waltham Abbey
The Lee Navigation once connected into the actual River Lea for a short distance from a point just above the M25 at Rammey Marsh as far as the Hazlemere marina footbridge. From here one could reach Waltham Abbey along a branch of the River Lea as well as boat upriver towards some wharves to the north of Waltham Bridge. None of this exists at all now. The new replacement flood relief channel for the River Lea replaced the original river channel – the only trace that such an arrangement ever existed is the remains of a weir that can be seen to the south of Hazlemere marina, where the Lee Navigation and the River Lea merged for about a quarter of a mile.
From Tottenham to Kings Weir it is now over eleven miles of solid canal cruising. Originally the canal sections were split into approximately a mile to the south (that is to the brief intersection with the River Lea below Rammey Marsh) and then six & quarter miles thence to Tottenham (this sections on the Rammey Marsh – Tottenham section were shorter still when other connections to the River Lea remained. To the north of Waltham there was three & half miles to Kings Weir. Between the two Waltham locks, there was a connection to the River Lea, known as the Powdermill Cut. It led to a lock that accessed the River Lea. It enabled access to yet a further set of locks leading onto the private canal system within the Royal Gunpowder Mills complex. Powdermill lock was demolished to make way for the new River Lea (Horsemill Stream)
The picture above shows the new River Lea channel by Waltham Bridge. This new channel has cut all the former connections between navigation and river. If any water borne connections were to be restored allowing boats into Waltham itself, the only possibility would be to re-use the original river course from Rammey Marsh (which indeed provided an alternative route to that of the Lee Navigation until the inter-war years) and then along part of the Horsemill Stream in order to attain the original Waltham Abbey cut. Weir levels would have to be altered and several bridges raised so there’s certainly no possibility of any restoration of any kind occuring around here. Of the Lea Navigation itself (and Hazlemere Marina bridge) these can be seen on the far right in the picture above.

The two Waltham locks, Town and Common lift the Lee Navigation up to Cheshunt, a useful mooring spot for its close-by railway station and local shops. There are plenty of walks in the area. including ones along the River Lea flood relief channel, and along the remnants of the Powdermill Cut. The picture shows Waltham Town Lock. This is the second lock built here, the original Lee Navigation lock of the 1770’s was actually by Hazlemere marina. The old lock dropped straight down into the River Lea itself. The old lock keepers house still stands, whilst part of the lock walls still exist, easily offering identification as to the location of the old lock.

The modern footbridge at Waltham Common

The section between the two Waltham locks has a large flock of geese. This view is of the straight below Waltham Common Lock 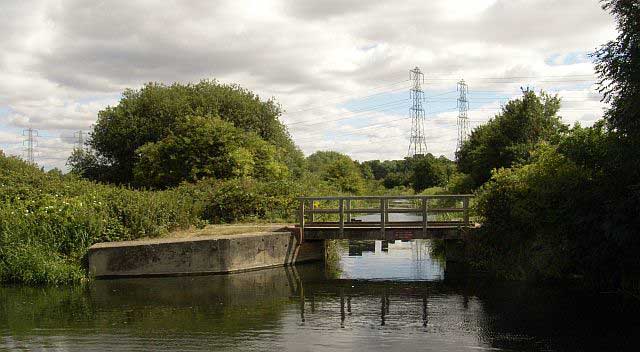 Waltham Common lock in the autumn

After the stretch through Cheshunt where good moorings are available, the lock of the same name follows almost immediately, and the River Lea runs close to the lock. Cheshunt lock has some really heavy gates so be prepared for a bit of extra effort here. 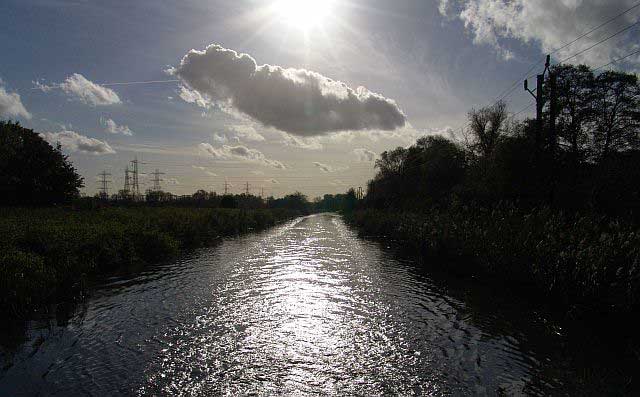 A view of the waterway below Aqueduct Lock

The Aqueduct
The Lee Navigation has threaded its way through countryside since Waltham, and it is a little more pleasing to cruise, despite still being predominantly straight with those ugly pylons for company. The next lock is known as Aqueduct. Just above the top of the lock the Lee Navigation crosses what is know as the small River Lea on an aqueduct. Here is a good reminder that the Lee Navigation is a canal, not a river as some would have you believe. It of course continues straight as an arrow, but when one passes the next bridge there is a surprise. This is Kings Weir, where the Lee Navigation and the River Lea are united for a short, but pleasant stretch into Broxbourne. For the last eleven miles both canal and river have been separate, so it makes a great difference to cruise on a real bit of river! In my view once you get past Aqueduct Lock the really nice bits begin – and one’s expectations of what the Lee Navigation has to offer improves most considerably.