The final section of the Lee Navigation is just over three miles long. The course of the River Lea has been utilised since the weir below Ware bridge. The approach to Ware lock is actually a man made channel built to avoid the local mill. The navigation uses the River Lea for a further stretch after Ware lock before making off a final section of canal that takes one through Hertford lock. From here to the visitor moorings the navigation is very narrow and also shallow. Beyond here one can cruise past the attractive houses along the waterway and under Folly bridge where there’s an opportunity to wind the boat. The final few yards between Folly bridge and Hertford Town Bridge is the only original stretch of River Lea remaining in Hertford. There have been proposals to extend the navigation the quite short distance to the weir just below Hertford Castle. 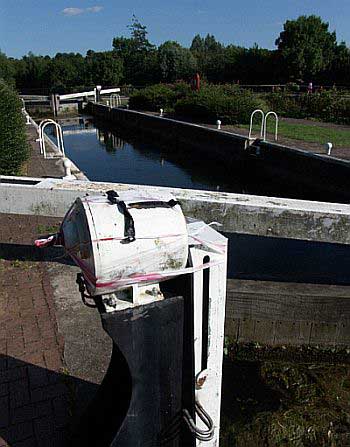 Ware Lock
Ever wanted to cruise an Environmental Agency waterway without paying for a licence? Well the stretch of waterway around Ware lock, including the lock itself, is controlled by the Environment Agency, not British Waterways and certainly not Canal & River Trust! The lock has EA notices and the different types of paddle and construction are immediately apparent, as is the extra care that is tended on the lock structure. The EA controls the section because of the need to regulate the water abstraction that is neccessary to feed the nearby New River. Its so short a length that a licence would be ridicolous anyway!

The approach to Ware Lock from the Hertford direction. The River Lea goes to the left over the weirs. The river itslef however used to be situated on the south side of the valley through Ware, its original course now nothing more than a muddy ditch that used to serve as an overflow from the nearby New River. The Lee Navigation once again uses an artificial cut from here through the lock as far as the Ware Priory car park visitor moorings, as well as having moved the course of the river for a considerable distance above Ware lock to the north side of the valley

The New River intake above Ware. Water is taken to supply the New River which provides a substantial part of London’s water supply. Next time you drink your water it probably came from the River Lea!

A lone canoeist and a swan on the River Lea at Ware Park, just below Hertford. The scenery on the final stretch is quite nice 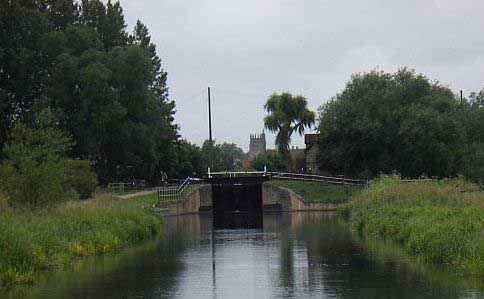 The River Lea sadly departs once again across fields (above picture) as the Lee Navigation takes off on its own, heading in a dead straight line for the final lock at Hertford using the alignment of the old tailrace from Dickers Mill (top)

Hertford Lock. Its quite a deep one 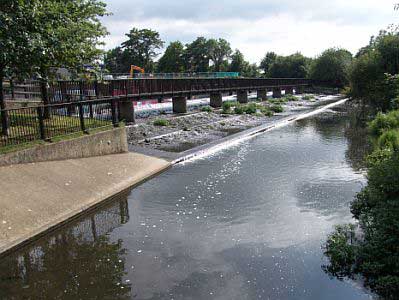 Hertford Weir. The River Lea uses the channel which was built by, and is used by the Lee Navigation and which the boat is crusing on – left picture. spills over the weir into the original course of the River Lea. This is now exclusively the minor relief channel’s since the Lea was diverted from its original barge river alignment

Beyond the weir is the visitor moorings at Hertford on the diverted alignment of the River Lea. The topmost of the old River Lea’s (aka the Barge River) locks was just a short distance to the right of the new alignment

Past the visitor moorings are these attractive ‘riverside’ houses. They’re not really on a riverside though. The River Lea’s original course around the other side of Folly Island was at a lower level, it was blocked off and forced down the Lee Navigation’s newly constructed cut. This is a rare example of a river being forced along a canal navigation (as opposed to sharing part of a river’s channel, such as those found on the Grand Union and Oxford canals) and as a consequence the lie of the land to the north is below the level of the River Lea 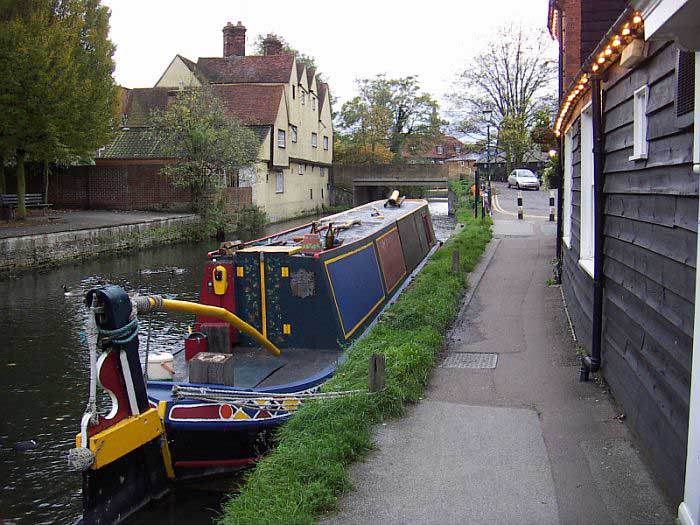 A butty type boat outside the Old Barge Inn

The River Lea beyond Folly Bridge. This the turning point for boats. This is the point where the original River Lea and the diversion built by the Lee Navigation diverges. The original River Lea went the other way (off the picture to the right) where it then began its descent through the first of the old Barge River locks. Its difficult to believe, but boats actually used to enter Hertford from the opposite direction to now, and what is now the Lee Navigation Channel was originally part of a small stream which served a mill. There isnt anything to see of this alignment or of the old Barge River and its locks. A minor relief channel replaced the original river.

On the section of the original River Lea in Hertford. Its quite a short run to the final end of the navigation at Hertford Town bridge (seen in the distance) but boats must reverse as its not wide enough to turn along here 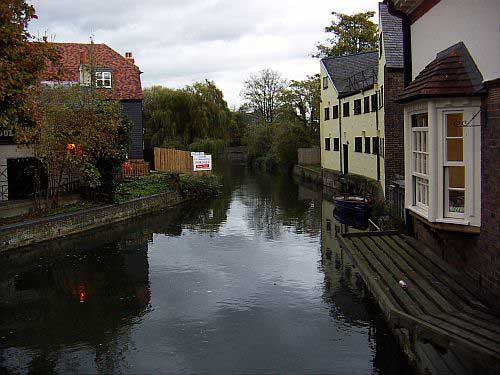 The very final navigable bit of the River Lea and the very end of the Lee Navigation as viewed from Hertford Town bridge. Not many people know but it is possible to moor up at the pub right by the bridge on the north side of the channel (extreme left of picture)

Left – Hertford Town bridge – The River Lea comes through both bridgeholes. Right – The larger of the two bridgeholes can take a boat, but beyond its very shallow and on our attempt we didnt get any more than three quarters of a boat through (right picture) Its just a few metres to the weirs at Hertford Castle that see the clear waters of the River Lea tumbling its way down from Luton and Welwyn Garden City. There has been talk of providing a basin at the foot of Hertford Castle for visiting boats.

Next: The Lee Navigation – a canal or a river – plus boating, mooring information etc